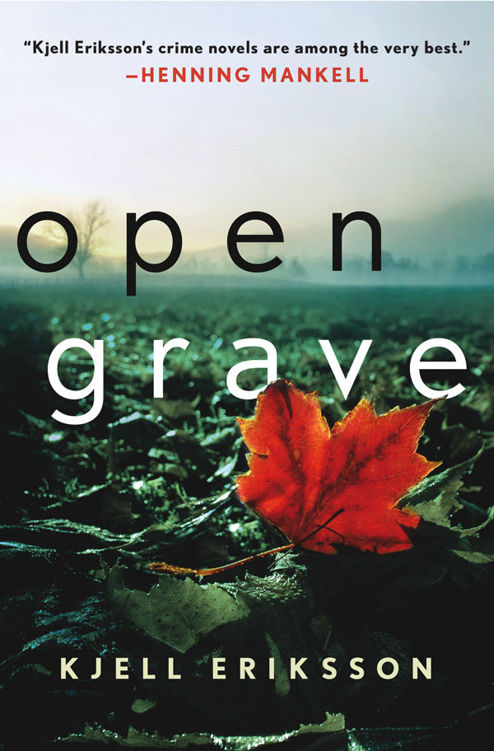 The notification came unexpectedly.
Bertram
von Ohler was eighty-four years old after all, somewhat frail, his legs did not always hold, the numbness in his hands created difficulties, especially at the dinner table. The dizziness in the evenings was getting more troublesome and meant that he socialized much less often. Bridge nights were sacred, however. There were some who thought he did not have much time left; the whispering about his ill health had increased.

Some were old colleagues who took pleasure in backbiting the old professor and competitor, or else they were simply acquaintances who for lack of other diversion spread unfounded rumors. One day it was some neurological disease that would soon break him down, the next the problem was advanced prostate cancer. There were also friends around him who listened eagerly, perhaps contributing a detail or episode and in that way kept the fire going.

Everyone took part in the rumor spreading with the same poorly masked enthusiasm. It was as if the sight of the old man, or the news that always flowed in during the autumn’s customary speculations, automatically elicited comments about his imminent demise.

His real remaining friends were few. Some had left earthly life, others were senile and put in homes. A professor in a related discipline, obviously demented, was shunted aside to a family estate in Sk
å
ne. But the few with whom Ohler socialized were upset.

“I’m used to it, many have tried over the years to take honor and glory from me and now it’s my life they’re after,” was his calm comment when his friends complained. But deep down he was distressed, disappointed at the pettiness and ill will, sometimes even genuinely angry.

He had reconciled himself with many things. Old grudges were buried, injustices that had been harbored for decades receded in a forgiving forgetfulness. Even Associate Professor Johansson, who lived only a stone’s throw away, could now exchange a few words with his former rival. Most recently, the other day they discussed Obama and “the other guy,” neither of them wanting to admit that for the moment they had forgotten his name. The professor stood on the sidewalk, the associate professor with a rake in his hand on the other side of the privet hedge.

Even the memory of his wife, deceased for many years now, had something conciliatory about it. Bertram von Ohler had developed a theory that in reality he had her to thank for his successes, indirectly and without her conscious assistance, but even so. She who the last thirty years of their life together constituted an unimaginable torment for him.

How could a phenomenon as lovely as Dagmar had once been turn into such a monstrous creature? He had consulted colleagues to get some explanation for her behavior with the help of academic expertise. No diagnosis could ever be made. “Some people are mean, it’s that simple,” a professor in psychology once stated when Ohler let slip what a virago he was living with.

Every breakfast in the Ohler home was a minefield; a single false step and the morning’s peace was shattered. Every dinner was trench warfare, with ambushes and snipers, and on really bad days it escalated to veritable carpet bombing of reproaches and suspicions.

He did not desert his marriage, something which even his children advised him to do, but he fled to the department as often as he was able, and stayed until late in the evening. Sometimes he slept there in a little storage room.

Perhaps it was this fact, this absence from home and wife, that was the basis for his success in the medical field. He had Dagmar’s quarrelsome and her suspicious nature to thank for his research results and his professorship, and for this belated crowning of his career.

The word came late in
the morning. Bertram von Ohler had just come home from a short walk and was preparing to have a pasta salad, which Agnes had prepared the day before, when the telephone rang. It was Professor Skarp at the Karolinska Institute.

Ohler had only met him in passing at a few gatherings. For that reason it was somewhat surprising that after the introduction he started with the word “brother,” as if they were members of an order, which Ohler doubted.

“Brother, I have the great honor and happiness to report that Professor Emeritus Bertram von Ohler has been awarded this year’s Nobel Prize in Medicine.”

“Good for him,” was the only thing Ohler got out, incapable of putting these simple facts together into a coherent sentence.

“What did you say?” asked Skarp.

Bertram von Ohler, that’s me of course
, the thought passing like a projectile through his head.

“What did you say?” he let out like an echo.

Professor Skarp left out “brother,” but otherwise repeated the sentence word for word. When he got no response this time either, other than labored breathing, he added something to the effect that he understood that this was overwhelming news, not unexpected in any way, but still no doubt difficult to take in immediately.

“Professor von Ohler, dear colleague … are you all right?”

“Fine, thanks. And I was just about to eat pasta.”

“Now it will have to be something more festive,” said Skarp, laughing with relief.

“I must call my children immediately. I’ll have to get back to you.”

“Of course. You can certainly expect an onslaught of phone calls and visits, brother, so perhaps it’s wise to notify those closest to you first.”

As if someone had died, thought Ohler.

“You don’t want to hear the motivation?”

“No, thanks, I think I understand. If you’ll excuse me now.”

They ended the call and he hurried to the toilet.

“Now I’m pissing as a Nobel Prize winner,” he said out loud, managing to squeeze a few drops from his wrinkled sex.

Instead of calling his two
sons, both professors, one in Lund, the other in Los Angeles, and his daughter, who was research director at a pharmaceutical company in town, he pulled out the phone jack, quickly shoveled down a little of the pasta, took a few gulps of water, and left the house.

It was a radiant day, so he found, as he expected, Associate Professor Johansson in his yard. Marching in through the gate and ringing the doorbell would seem too forward, they were not on such good terms with each other.

The associate professor looked almost happy as he stood with the rake in his hand, surrounded by parallel rows of leaves. The associate professor had explained to Ohler that leaf raking must be done in a systematic way, and he understood now that his neighbor was about to combine the rows into neat small piles.

“It’s a good thing it’s not windy,” the professor began, but realized at once that this was not a particularly apt remark.

“I would never rake on a day like that,” said the associate professor.

The associate professor took a few swipes with the rake. Ohler realized that he could not linger too long, and decided to get right to the point.

“A few minutes ago I got some happy news and I decided to share it with you first of all.”

The associate professor looked up.

“We are colleagues, after all, we shared a laboratory for many years, we took part in joint projects, shared successes and disappointments, I don’t need to remind you of all that, but I’m doing it anyway, on a day like this.”

The associate professor stopped his work, leaned the rake against the trunk of a copper beech and took a few steps closer to the gate.

“That is an amazing tree,” said the professor, pointing toward the beech tree. “Surely the most magnificent we have in the area.”

The associate professor looked even more surprised. It was uncertain whether it was due to the unexpected praise or that the professor used the word “we,” as if he included the whole neighborhood as owner of the tree.

“I’m guessing that it’s the same age as the house,” the professor continued.

Now the associate professor was standing right inside the gate. His long, thin face expressed a touch of impatience, perhaps irritation, but he was trying to smile anyway, uncertain of what occasioned this unexpected charm offensive. But the smile mostly remained a twitch in his face.

The cheeks rosy from sun and wind, the watery eyes, the narrow mustache, a barely visible streak over an open mouth, where a few fangs were visible, the narrow, sloping shoulders and the delicately built chest, all that was visible of the associate professor above the wooden gate, expressed an astonished distrust.

“The Nobel Prize,” he repeated awkwardly.

“I assume so,” said the professor.

IDD was the abbreviation they had used in the research group for the discovery that had been presented about twenty years ago and for which the professor had now been granted the honor.

“I didn’t ask, I had to take a piss when Skarp called.”

Associate Professor Johansson shook his head and the professor saw doubt change to conviction, and he understood why: Never in public life had he used swear words or other strong expressions, never before had he uttered the words “take a piss,” not even in his youth or in family circles. At the most, “have to pee.”

He thinks I’ve lost my mind,
thought Ohler, and at that moment it struck him that perhaps he had been the butt of a cruel joke. He was barely acquainted with Skarp, they had not had so much contact that the professor could say he would recognize the voice with certainty, in other words it could be anyone at all pretending to be the chairman of the Academy of Sciences. Someone sufficiently familiar with his background, his research, in the procedure around how the prize winner in medicine is named. Someone who wanted to play a trick on him, have a good laugh at his expense. That the person who called had addressed him as “brother” was a hint that something was amiss.

This sudden insight, that the whole thing perhaps was a deception, made the ground sway. He took hold of the gate, tried to suppress the dizziness by closing his eyes, lower himself somewhat with bent knees and arched back, the technique he always used. The fireflies behind his eyelids glistened in rapid bright streaks, there was singing in his head, and he had a slight taste of iron in his mouth.

The Knight of Swords and Spooks by Terry Deary
Survival of the Fiercest by Anna Carey
House of the Sun by Nigel Findley
The Bone Hunters by Robert J. Mrazek
Don't Say A Word by Barbara Freethy
Time to Live: Part Five by John Gilstrap
Orbital Decay by A. G. Claymore
Joe Victim: A Thriller by Paul Cleave
The Puzzler's Mansion by Eric Berlin
No Coming Back by Keith Houghton