Operation: Endeavor (When The Mission Ends) 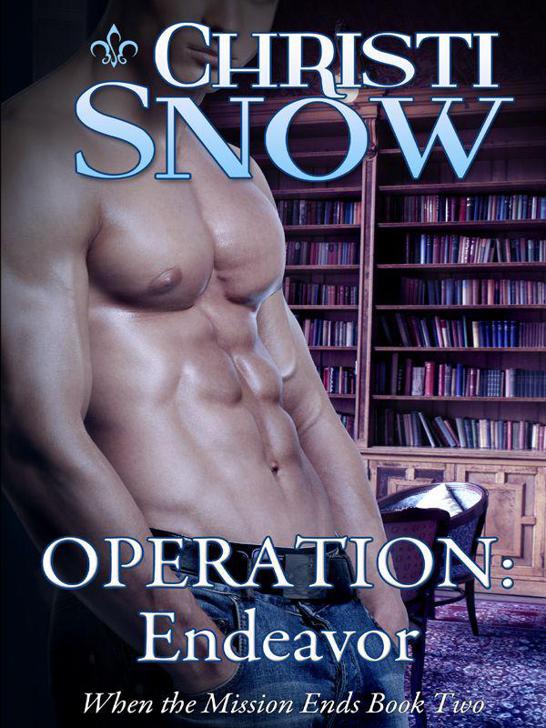 When the Mission Ends Book #2

Cover and eBook Design by AM Design Studios

This book is a work of fiction. Any names, characters, events, or incidences come from the author’s imagination and are not meant to portray real persons or events.

Texas Tech University and Lubbock, TX are real places, but again they are used only as settings in this very fictional world. Any similarities are purely coincidental.

This book is for my siblings:

to be four years younger than me)

I love you guys.

I know you’ll always have my back…

And then give me a hard time about it later.

A huge thank you to my family: Ben, Jacob, and Kat. You guys have been my biggest cheerleaders and support and you rarely complain when we have frozen dinners…again. I love you three more than anything!

Mom, this is my official apology for not calling as much as I should and for the scattered conversations when I do. You’ve been wonderful to let me ramble on about Colton and Penelope and simply the up’s and down’s of doing what I do now. Thank you for always being there, for always listening, and for always doing a last-minute read when I need another opinion. I couldn’t do this without you!

My betas… Girls I love you for the support you offer and the advice you give. This book has changed so much since you originally read it. I hope you still like it. Thank you to: Amber, Amy, Anso, Jennifer, Kara, Kim, Aunt Marcia, Michele, and Mom. Sabrina = proofreader extraordinaire!

And to my real life version of the Abilene Authors… I love all you guys from SAW (San Angelo Writers). We may not have a Tony, but we sure do have a LOT of fun! Nikki and Ben, your feedback on this book was INVALUABLE. Thank you for the time and effort you put into your feedback. It helped so much.

I’m a lucky girl. I had two wonderful editors work with me on this book: Sarah Negovetich and Mia Downing. Because of you two, this book is so much better and I owe you so much for that! Love you two and that you always kept me giggling, even while looking at the never-ending edits.

Finally, thanks to you, my readers!

I was completely overwhelmed by your support on
Operation: Endgame
.

I hope that you love
Operation: Endeavor
just as much!

Books In This Series

When the Mission Ends Trilogy

Book #.5: Before the Mission Begins

Bo
oks In This Series

Ten year old Colton stumbled down the hall of the chapel and worked to keep a tight rein over his emotions. Tears battered at his insides, trying to get out. He wouldn’t cry. If he started, he wasn’t sure he’d ever be able to stop. Don’t think about it, he berated himself. Don’t think about his parents lying dead in the next room.

He needed to focus on the twins. Chris and Cassie were only six years old, too young to understand why mom and dad weren’t coming home. Not that he really did either, but that didn’t matter. Not now. Now, he needed to be there for them. But first he had to find them. They were always wandering off. The twins lived in their own little imaginary world where only the two of them were invited.

He started to turn the corner of the hall, but two female voices stopped him.

“It’s just so sad. Those poor kids. What’s going to happen to them?”

“I heard their grandfather, Lora’s dad, is coming to get them, but as far as I know, he doesn’t even know the children. He and Lora were estranged. He never approved of her marriage to Major Robertson.” The women murmured their disapproval. “There’s nowhere else for them to go. There aren’t any other relatives willing to take in all three of them. You have to wonder about a man his age living by himself. How is he going to handle three young children?”

That ball in the pit of Colton’s stomach started spinning. Estranged? Colton had no idea what that word meant, but it couldn’t mean anything good. A grandfather? He didn’t think they had any grandparents still alive. Who was he and why hadn’t he ever met him?  And now they were supposed to go live with him?

The women continued talking as they wandered down the hall, but their voices were too quiet now for him to hear any more. He peered around the corner toward their retreating backs. He still had no idea where the twins were and needed to find them before they all got into trouble. They were his responsibility now and losing track of them wasn’t acceptable.

He gritted his teeth and looked in the doorways, searching. Finally, at the third door, he heard whispering in the back corner.

Creeping in, he approached the voices, just in case they didn’t belong to the twins. But as he got closer, he realized it was Cassie he heard. She was crying and Chris comforted her. Colton swallowed the lump in his throat as he crouched down beside them. He hated how helpless he felt when she cried.

Chris looked up at him with anguished eyes. Colton reached for him, but Chris shook his head vehemently. “Leave us alone. We’ll be there in just a minute.”

Colton stumbled back to the door to wait for them, trying not to let the rebuff hurt. He wrapped his hands around his stomach to control the shaking of his body. He’d give anything right now for a hug from his mother. But she would never hug him again. He gritted his teeth again.
Not gonna cry. Not now.

The twins always turned to each other before they turned to him. He knew that. He shouldn’t let it bother him. But in this case, they were all in this miserable circumstance together. They needed to let him help. The twins walked up behind him and Colton clenched his jaw to get his anger, fear, and hurt under control. They were scared enough already.

He turned to them and asked gruffly, “Are you guys okay?” He watched them. They were still young enough that they looked identical despite being the opposite sex. The only difference between the two of them was their hair. Cassie’s was flame-red and Chris’s was blond. Right now both of them also shared identical red-rimmed, sapphire blue eyes.

“We need to get back before someone starts looking for us.” He looked down the hall and Colton’s stomach sank at the sight of his father’s commander coming toward them. At first glance, the commander didn’t look happy, but when he spotted them, his face softened.

As he walked up, the tall man looked at them kindly even as he quietly admonished Colton, “We’ve been looking for you three. We need to get started and I need to introduce you to someone.”

Colton looked beyond the Colonel to where an old man stood observing the three of them. Colton immediately stood up straighter and reached for Chris and Cassie. As they approached the man, Colton watched him. He looked at them unsmiling, but his blue eyes were kind.

“I’m sorry we weren’t there, sir,” Colton said to the Colonel, but then he nodded his head at the man. “Is that our grandfather?”

The Colonel looked at Colton in surprise, but nodded. “Yes.”

Colton stretched out his right hand toward the man. “I’m Colton.” He drew his siblings up beside him. “This is Chris and Cassie. This is hard for them.”

The man cleared his throat as he said, “This is hard for all of us. I’m your grandfather. Your mom was my daughter and I hope you three will come live with me. I’m sorry this is the first time we’ve had a chance to get to know each other.”

As one, the twins grabbed hold of each of Colton’s hands. He squeezed them in reassurance and swallowed his own fear and uncertainty. He had to be strong for them. “Do you live here?”

The man shook his head. “No, I live in a town further north of here called Lubbock. Have you ever heard of it?”

The man cleared his throat. “Well, from here on out, it’ll be your home… with me, if that’s okay with you three.” He looked at the three of them questioningly.

The twins began to cry. He couldn’t blame them as he wanted to do the same thing, but they didn’t have any other choice. Their parents were dead and no matter how much they wanted it to, that circumstance wasn’t going to change. Going with this man was the only way they’d be able to stay together. They didn’t know their grandfather, but he had nice eyes. That would have to be enough.

The Sorceress Screams by Anya Breton
The Blasphemer: A Novel by Nigel Farndale
Savannah Reid 12 - Fat Free and Fatal by G. A. McKevett
Firestorm by Brenda Joyce
Because of You by Lafortune, Connie
The Nuclear Catastrophe (a fiction novel of survival) by Billig, Barbara C. Griffin, Pohnka, Bett
Ten Novels And Their Authors by W. Somerset Maugham
A Love So Tragic by Stevie J. Cole
Huntsman by Viola Grace
In the Shadows (The Club, #10) by M.A. Grant