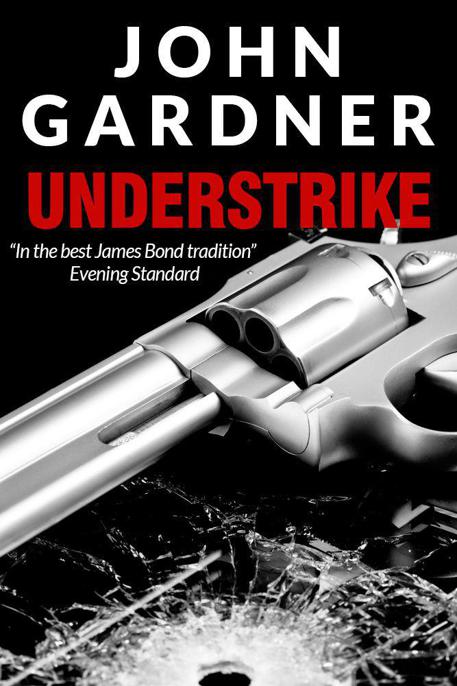 John Gardner has asserted his rights under the Copyright, Design and Patents Act, 1988, to be identified as the author of this work.

This
edition published by Endeavour Press Ltd in 2014.

Extract from
The Liquidator
by John Gardner

It was warm. Too warm for Khavichev, who, after suffering ten minutes of the stifling heat in the long room, had opened one of the tall velvet-curtained windows. Now he leaned out, hands heavy on the sill, his closely-cropped hair showing like corn stubble to the sun. To his left Khavichev could see the whorled domes of St. Basil’s Cathedral, a bright gingerbread house alone in the cobbled vastness of Red Square. Across the road, the Lenin Museum formed a rusty backdrop to the straggling sightseers jostling their way into the square to stare, or stand silent in the great queue which snaked from the Lenin Mausoleum. Below, among the foreigners with their expensive cine cameras, the sweating city men in slack formal suits, and the visiting countryfolk, drab even in floral dresses, he caught sight of a little knot of teenagers—gaudy in make-up and mock leather aping the West—the stilyagi, Moscow’s jet-set. Khavichev remembered, with some misgivings, the article passed to him from Central Information last year—clipped from the London
Sunday Times
—claiming that young Russian girls were clamouring for black nylon underwear. Dangerous decadence, he thought, withdrawing his head and turning back into the room.

Khavichev
was a big man, in all senses of the word. Six feet two inches in his stockinged feet, with shoulders like the back of a well-padded armchair. His face was hard—the texture of old oak bark—rarely showing emotion. His eyes were the only feature which in any way betrayed the full potential danger of the man. “Khavichev’s eyes,” the President of the Supreme Soviet had once remarked, “have the power of an expertly-handled whip. They never look at you. They either flick, lash or caress.”

At
this moment the eyes were flicking—as they always did when something big was imminent. For, like all men who had found success in high authority, Boris Piotr Khavichev—Director of Soviet Counter-Espionage and Subversive Activities—knew his limitations. He was always a shade nervous, a trifle more wary, when planning an operation which strayed near to the breaking point of his self-known power.

He
glanced at his watch. Three-ten. The meeting was scheduled, as always, for three-fifteen. He walked to the big kidney-shaped table, his slight limp—the relic of a parried knife-thrust in a Tangier alley—barely perceptible. Taking his place in the centre chair, Khavichev looked up at the oblong cinema screen which stretched blandly over the far wall. The fingers of his left hand strayed slowly down the line of little coloured buttons, set in series conveniently by the leather blotter. He pressed the button outlined in blue and spoke into the microphone desk set which connected him with the projection room high in the wall behind.

“
All is prepared, Comrade General.” The answer came pat from the loudspeaker above the screen.

“
We will see the special film first. Before the main business. We will need the mosaics of San Diego later.”

Khavichev
pressed the white button. As though he had operated a spring mechanism, the door to the right of the screen whipped open. A young army lieutenant clicked into the room.

“
He is here now, Comrade General. You wish to see him?”

“
It should not be necessary. He knows what to do?”

“
When we have seen him you may take him straight back to the villa. He has a lesson with Professor Engler at four, I believe.”

The
lieutenant nodded. Khavichev made a sharp upward gesture with the back of his outstretched hand. A signal of dismissal. The lieutenant stiffened to attention, then turned, closing the door behind him. Almost at the same moment the main double doors of the room were thrown open by the two uniformed guards—always on duty in this part of the building on Tuesday afternoons, the regular time for the weekly conference of Heads of Staff.

Khavichev
rose, his lips forming the hint of a smile as he greeted his Departmental Chiefs: Archeyev of Naval Intelligence, young, slim, with that faint trace of effeminacy which often stamps naval officers who are wedded to the sea alone; Porovsky, Head of Military Counter-Espionage, stocky, with the unmistakable ruthlessness of a former OGPU man; and Varlamov, Commander of Strategic Air Espionage, a pompous, sarcastic face hiding an alert brain which carried—Khavichev often feared—more secrets than any other in Russia.

One
of the soldiers quickly circled the windows, softly pulling the drapes. The two large chandeliers flashed into light.

After
the usual formalities, the doors were closed and the four men took their places at the table. Khavichev unbuttoned the top of his tight jacket, cleared his throat, and began to speak: precisely, without any apparent interest in what he was saying: using the minimum number of words to convey the maximum information.

“
Before we start the main business, comrades, there is a surprise I have been saving for you. We are to see a film. It concerns one man. Study him closely. He should be of particular interest to
you
, Comrade Varlamov.” He glanced quickly towards the airforce man and touched the blue button. The lights went out and the screen became filled with coloured life.

The
picture showed London’s Whitehall: the camera pausing for a moment at the Cenotaph before zooming in to focus close on a nondescript door. The door opened and a man came out into the watery sunshine, stopping at the edge of the pavement in an attempt to hail a taxi. The camera zoomed closed and Khavichev gave a satisfied smile as he heard Varlamov’s slight intake of breath. The man in the picture was tall with a well-balanced athlete’s body. By Western standards the face was undeniably good-looking: a smooth brown tan contrasted with the distinguished flecks of grey that were just beginning to show at the temples. His mouth tilted slightly in an upward curve on the left side. It was a mouth, Khavichev mused, which must fascinate women. But the man’s most striking feature—like that of Khavichev—lay in his eyes: clear, ice-blue, and, in the film, laughing back at the camera.

For
five minutes they sat silently watching the man posed against a series of recognisable London landmarks—gazing up the river from Westminster Bridge, strolling in Hyde Park, smiling in front of the London Hilton and leaning elegantly against the rails of Buckingham Palace. Finally, a set of close-ups—full-face; left and right profiles. The screen went blank and the lights came on again. One of the soldiers moved to draw the curtains. There was an uncomfortable tension in the room overlooking Red Square. At last Khavichev spoke.

“
The subject of that film is especially susceptible to women. I need not tell you that the operative who took those shots risked her honour—and I might add, lost it. In the Dorchester Hotel, I believe. For security reasons her name now appears on the list of Honoured Artists of the Republic.”

Nobody
moved, Khavichev continued: “We have been looking at a member of the British Department of Special Security. His name is Brian Ian Oakes. He is between forty-five and forty-six years of age and is known to his intimates by the particularly nauseating nickname ‘Boysie.’ His code letter is ‘L,’ and for some considerable time he was the chief liquidating agent for Special Security. His record until last year showed him responsible for the deaths of at least twenty-five of our operatives.”

Khavichev
paused, looking at each of his Departmental Heads in turn. “But,” he said, “information led us to believe that the man was not all he seemed. During the spring and early summer of last year we became increasingly certain that in reality the man was a neurotic dolt. There was even evidence that he did not carry out the liquidating operations himself.”

Khavichev
’s voice assumed a cold harshness. “We were proved wrong. Mr Boysie Oakes showed himself to be a most painful thorn in our flesh during the bungled, miscalculated and totally inadequate ‘Operation Coronet’* devised by Comrade Varlamov. You recall Mr Boysie Oakes, Comrade?”

Varlamov
’s face was a picture of suppressed fury: “I remember him, Comrade General.” An undercurrent of venom beneath the smoothness.

“
Good. Then watch that door.” Khavichev raised his hand towards the door to the right of the screen. His left hand slid to the white button. The door opened and a man walked slowly into the space between the table and screen.

If
the newcomer had been a naked freak, with two of everything, the effect of his appearance could not have been more startling. Varlamov half rose to his feet, his mouth forming a silent oath. The others froze—Archeyev in the act of lighting a cigarette, Porovsky with a hand to his head. The man who stood before Russia’s Espionage High Command was, to all intents and purposes, Boysie Oakes—the one-time Liquidator for British Special Security.

“
Amazing,” purred the Director. “Mr Boysie Oakes to the life.”

Varlamov
allowed the oath to escape—loudly. Khavichev continued to smile.

“
Just walk around for a moment, will you.” He spoke to the man on display who smiled back, increasing the upward curve of his mouth’s left corner. For a few moments he paraded for inspection by the quartet.

“
You may go.” Khavichev dismissed him curtly and turned back to his brother officers.

“For your information only.” Again there was the penetrating cut of authority. “We discovered this man quite by accident. Eight months ago he was a clerk in a tractor-works. Luckily for us, an intelligent clerk. In a few days he will have completed a rigorous course of training. He walks, talks, eats, and, I suspect, thinks like Mr Bosyie Oakes. Our best linguists and our most competent instructors have worked on continuously. He has been exposed to the latest methods of hypnotic and deep-sleep indoctrination. His real name is Vladimir Solev. Bearing in mind our friend Oakes’ coding, I prefer to call him ‘Double L’.”

They
had never really heard Khavichev laugh before. The cackle seemed to reach up from dark bowels to rumble out in a witch-like wheeze. The experience of hearing Khavichev laugh was not a pleasing one, thought Varlamov. The Director had controlled his mirth and was speaking again.

“
I have not yet decided how, or when, we will use Solev. Oakes himself has been removed from his duties as Liquidator. At the moment he seems to be engaged in comparatively harmless courier work. But, my friends, I am certain that the time will come when we can perform a switch between Mr Oakes and Comrade Solev which will be to our lasting advantage.”

He
looked around almost benignly. “Good. Now to business. The change in plan is definitely on. London and Washington seem to have chosen an excellent date for their picnic, so we scrap our original Stage Three and concern ourselves with the new developments. I have been in touch with U-One—Gorilka—who tells me that the arrangements can be made without disturbing the original primary stages to any large extent. Before we discuss the details of the unfortunate accident I would like to concentrate on the political repercussions as calculated against possible military outcome…”

The
three Heads of Staff transferred their thoughts to the all-important work of the day—Stage Three of the complex operation which could possibly plant the most crippling blow yet into the hard solar plexus of the Western Alliance.

Outside
in the sun, a big black party Zis saloon—with blinds drawn—was taking Vladimir Solev back to his private villa on the Lenin Hills near the University. There he would continue to polish his impersonation of Boysie Oakes.