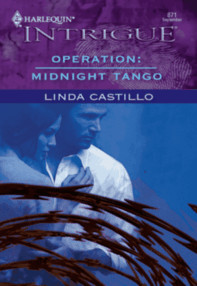 “I’m not who you think I am,” he growled

If she hadn’t been so terrified, Emily might have laughed. “Next you’re going to tell me you’re innocent.”

“Honey, I’m a long way from innocent, but I don’t belong in this hellhole any more than you do.”

His voice was like a low rumble of thunder announcing the approach of a violent storm. Emily was aware of his body pressed firmly against hers. She could feel the high-wire tension in his muscles.

“Not another word,” he whispered. “Or I swear I’ll kill whomever walks through that door.”

His gaze fastened on hers and she saw a flicker of an emotion she couldn’t quite identify.

“Unless you want me to pull this trigger, I suggest you follow my cue.”

Before she could answer, he slid his hands to either side of her face and lowered his mouth to hers.

Linda Castillo knew at a very young age that she wanted to be a writer—and penned her first novel at the age of thirteen. She is the winner of numerous writing awards, including the Holt Medallion, the Golden Heart, the Daphne du Maurier and received a nomination for the prestigious RITA® Award.

Linda loves writing edgy romantic suspense novels that push the envelope and take her readers on a roller-coaster ride of breathtaking romance and thrilling suspense. She resides in Texas with her husband, four lovable dogs and an Appaloosa named George. For a complete list of her books, check out her Web site at www.lindacastillo.com. Contact her at [email protected] Or write her at P.O. Box 670501, Dallas, Texas 75367-0501.

Zack Devlin
—A risk taker by nature, the charming undercover operative thrives on danger and isn’t afraid to put himself on the line. But he has one weakness—and it could destroy everything he loves.

Emily Monroe
—The corrections officer never let down her guard, until the fateful night she encountered Zack Devlin and became his hostage.

Adam Monroe
—Emily’s father has been dead for fifteen years. He disgraced the uniform he wore and then got himself killed in prison. Or was it all a cover-up?

Warden Clayton Carpenter
—Fifteen years ago, he was Adam Monroe’s best friend. Is he Emily’s only hope of getting to the bottom of what’s really happening at the Bitterroot Super Max Prison?

Marcus Underwood
—Does the prison administrator know what’s going on inside the prison? Or is he part of the problem?

Dr. Lionel
—His job is to keep the inmates healthy. But then why are the inmates dying while in his care?

Kendra Michaels
—A MIDNIGHT operative, she is sent in as an administrative assistant as extra eyes.

Jake Vanderpol
—Dispatched to the prison as a corrections officer, the undercover MIDNIGHT operative has an uncanny knack for anything electronic.

Avery Shaw
—He is a veteran MIDNIGHT agent in charge of the mission. He will do anything to keep his operatives safe. But he has his own secrets.

The scream echoed off the concrete walls, giving the prison the aura of a medieval castle where unspeakable acts of torture were routine. The prisoner lay on the narrow gurney, struggling against the nylon straps securing his arms and legs, drops of blood staining the sheet covering him from the hips down.

Pain and terror contorted his features. “No more,” he whimpered. “Please…”

The doctor in the white lab coat looked down at his charge and reminded himself that the man was a murderer who didn’t deserve compassion. But the knowledge didn’t make what he was about to do any easier.

Steeling himself against the prisoner’s agonized shrieks, he reached for the tiny vial marked RZ-902. “It’s almost over,” he said. “Just try to relax.”

His hand froze on the vial when the door swung open. Tension knotted his stomach when the man in the custom-made suit walked into the examination room.

“For God’s sake, I could hear him all the way to
the infirmary.” The man scowled at the prisoner. “Shut him up or you’re going to have people asking questions we don’t want to answer.”

“I was just about to sedate him before putting him into the testing chamber.”

“Do whatever it takes. Just shut him up. I don’t want questions from some do-good corrections officer.” Spotting the clipboard on the counter, the man in the suit picked it up and began to read. “How did the patient respond to the RZ-902 treatment?”

Both men knew the words
patient
and
treatment
were euphemisms for something far more sinister. Pushing that thought away, the doctor concentrated on answering the question. “Better than expected.”

“Excellent,” the man said, smiling with satisfaction. “I want a full report on my desk within the hour.” He glanced at his watch. “I’m meeting with our client at noon. I want all phases of product development detailed.”

“I’ll get right on it.” The doctor nodded as he lifted the syringe to sedate the prisoner.

“No. Please.” The prisoner struggled against the straps. “Don’t hurt me any more.”

The doctor and the man in the suit exchanged looks. The doctor couldn’t meet his patient’s eyes as he administered the powerful sedative. “Just a little
something for the pain,” he said as he slid the needle into the man’s arm.

“Can’t…murder…” The prisoner’s voice trailed as the drug seeped into his system.

The man stared coldly at the sedated prisoner. “You made sure he has no ties?”

The doctor nodded. “Just like the others. No family. No friends. He’s a lifer and hasn’t had a visitor in two years.”

“The Bitterroot Super Max has been fertile ground for patients. Make sure it stays that way.”

“I’m having another prisoner delivered to you. He should be here within the hour.”

“Another patient? Tonight? But it wasn’t—”

“I want him given the treatment. Full dose. Make sure the outcome is fatal,” he said icily. “Nobody will care if he passes away unexpectedly.”

The doctor felt as if a noose were slowly tightening around his neck. “Yes, sir.”

“Once you’re finished here I want you to take the data you need for the report and destroy everything else. I don’t want anything left behind.”

Understanding all too well what the man meant, the doctor nodded. “I’ll notify the crematorium right away.”

“I’m sure I don’t need to remind you of the sensitive nature of this project.”

“I don’t need to be reminded.” A man didn’t forget about something that tormented him day and night.

When the man left, the doctor wheeled the prisoner into the testing chamber and tried hard not to brood about what he’d done. He tried even harder not to consider what he had to do next.

Zack Devlin jolted awake to the clanging of steel against steel. He was on his feet in an instant, his every sense honed on the two corrections officers standing outside his cell.

Stand down
was the term officers used when they were about to enter a cell. It was a safety procedure that called for a convict to lace his fingers, then put his hands behind his head. What were two corrections officers doing in his cell in the wee hours of morning?

Zack assumed the position, his heart racing. “Isn’t it a little early for tea and scones?” he asked.

The first corrections officer was Mitchell. He treated the convicts with a firm hand but never unfairly. The other officer was about as pleasant as a bad case of the flu. He liked to tear down a man’s dignity. Maybe even hurt a man if he got the chance.

Mills’s keys jangled as he unlocked the cell door. “Step back.”

Zack did as he was told, but his nerves were on edge. Both men entered his cell. “If I had known you were coming, I would have tidied the place up.”

“Shut your smart mouth and show me your wrists,” Mills said sharply.

The Bitterroot Super Max Prison was a place of routine. Day after day after day that routine never altered. Two corrections officers coming into his cell at four in the morning and cuffing him was definitely not part of the routine.

“What’s this all about?” he asked, trying to sound casual.

Knowing he didn’t have a choice, Zack turned and offered his wrists for Mills to snap the nylon restraints into place. The thought that his cover might have been compromised floated through his mind. But he knew that was impossible. The agency had been meticulous in setting up the assignment and his background. There was no way anyone could know.

Zack wasn’t wearing a shirt. Just a pair of wrinkled drawstring pants that were issued to all the inmates for sleeping. “Not much room to hide a weapon,” he said.

“Just following procedure. Do it.”

Never taking his eyes from Mills, Zack did as he was told. He ground his teeth as Mills’s hands moved swiftly and roughly over him.

“He’s clean.” Mills grasped the restraints and shoved them up and between Zack’s shoulder blades. “You’re going to the infirmary.”

Zack’s heart rolled into a fast staccato. He was all too aware what went on in the prison’s infirmary. What the hell was going on? “I’m not sick.”

demon slayer 05.5 - the tenth dark lord a leaping by fox, angie
A God to Fear (Thorn Saga Book 5) by Joshua Ingle
Imperfections by Shaniel Watson
The Hundred Days by Patrick O'Brian
The Worlds of Farscape by Sherry Ginn
Replica (The Blood Borne Series Book 2) by Shannon Mayer, Denise Grover Swank
Palimpsest by Charles Stross
Eve: A Novel by WM. Paul Young
Requiem For a Glass Heart by David Lindsey
The Forgery of Venus by Michael Gruber