Read Other People We Married Online

Other People We Married 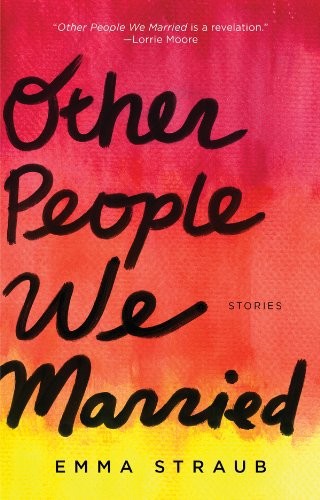 Praise for
Other People We Married

“Emma Straub is worthy of our adoration. These stories are wise, surprising, hilarious, and unforgettable.”

“In these stories of grief, love, loss, and transplantation, Emma Straub demonstrates her brilliance, her humor, her sharp observational powers, as well as her lyrical gifts and affection for the world. She is a terrific new talent.”

—Lorrie Moore, author of
Birds of America
and
A Gate at the Stairs

“Emma Straub has such a graceful, brittle, subversive voice that it takes a moment after you surface from her stories, drugged with pleasure and ringing with sharp insight, to realize how deeply she loves and understands humanity.
Other People We Married
is a terrific collection of stories, and Emma Straub is a joyous marvel of a writer.”

—Lauren Groff, author of
The Monsters of Templeton
and
Delicate Edible Birds

“The smarts and humor of a Lorrie Moore or a Laurie Colwin or a Laurie Anderson—any number of Lauries.”

—Kevin Brockmeier, author of
The Brief History of the Dead,
for the
Oxford American

—Thisbe Nissen, author of
The Good People of
New York
and
Osprey Island

Other
People
We
Married

This is a work of fiction. Names, characters, places, and incidents either are the product of the author’s imagination, or are used fictitiously, and any resemblance to actual persons, living or dead, business establishments, events, or locales is entirely coincidental. The publisher does not have any control over and does not assume any responsibility for author or third-party websites or their content.

The following stories appeared, in slightly different form, in the following publications:

“Some People Must Really Fall in Love,”
The Saint Ann’s Review

“Fly-Over State” and “Hot Springs Eternal” were published by FlatmanCrooked Publishing, both in their fiction anthologies and as a stand-alone book.

RIVERHEAD is a registered trademark of Penguin Group (USA) Inc.

The RIVERHEAD logo is a trademark of Penguin Group (USA) Inc.

For my parents,
Clint Eastwood and Miss America,
with love and gratitude

Some People Must Really Fall in Love

A Map of Modern Palm Springs

Other People We Married

Marjorie and the Birds

Some People Must Really
Fall in Love

I
n the living room, the conversation was about teacher/st udent romance. Most of the partygoers were clustered in the dining room, standing around the table snacking on Brie and carrot sticks, but a small contingent from the English department sat on comfortable chairs, enjoying the elbow room.

“It’s funny, though, isn’t it?” Karen Bernstein taught a class on Modernism. “It used to be sort of cliché, this idea of the lecherous guy, but now it’s all twenty-five-year-old blond women! They just can’t keep their hands off!” She grabbed the air.

“Right, right—like that woman who had babies with an eleven-year-old—what was her name?” Julie Specter taught Victorian lit, big novels with lots of characters. She was terrible with names.

“Mary Lou? Mary Beth? Something like that.” Laura
Reagan was the youngest professor in the department, and watched the most television. She looked at me, the second youngest, for confirmation.

“Mary Kay?” I said, trying to sound tentative. Everyone repeated it.

“But what do you think it’s all about?” Karen asked. “Really, I mean, why would a grown woman be interested in a teenage boy?”

Julie had two sons, ages twelve and fourteen. “They wouldn’t if they knew how bad their socks smelled,” she said.

One of the poets was hovering in the open doorway, a plastic glass of red wine in her hand, filled all the way to the top. She was new.

“I think it’s because they still think they’re sixteen,” Laura said. “They’re underdeveloped. You know, stunted.” She opened her eyes wide. The poet in the doorway took a big gulp of wine and wandered back toward the food. I wished I could follow, but I was sure that if I left the room just then, everyone would know. They would notice that I was wearing eyeliner for the first time in five years. I stayed put and said “uh-huh” at appropriate intervals.

Three of us shared a small office. Our desks were all pushed against the walls, so that when we were all in at the same time, the backs of our chairs were nearly touching. Laura sat in the middle, I sat closer to the door, and Jeff Lansky faced the opposite wall. We taught whatever they told us to, which meant the beginner classes: how to read, how to write, how to argue your case. I walked in with my lunch in a paper bag, and Laura and Jeff were huddled together, giggling.

“What’s up?” I sat down and my chair wheezed.

Laura got up and peeked out into the hallway, her little bird hands clutching either side of the doorframe. As far as I knew, she only ate vanilla yogurt and saltines.

“Well,” she said, looking back to Jeff. “This student of mine just came in, you know, for a conference…” She covered her mouth with her hand. Laura was pretty and wore office-appropriate attire, including heels. She had makeup on every day, foundation and everything.

“Go on,” Jeff said, winking at her. Jeff was the only gay guy in the whole department, and sometimes I felt sorry for him, that all he had was us.

“And I’ve never been so positive in my entire life that someone had a crush on me.” She opened her mouth wide, in mock disbelief, the kind of look eager moms get when trick-or-treaters ring the doorbell on Halloween. “It was so cute! He said, ‘Miss Reagan, my band is playing at the Union this weekend, and it would be so cool if you came.’ He blushed! I always thought he was sort of tough, you know, like a bad boy!”

“Plus you saw him checking out your boobs.” Jeff winked at me. He loved to wink.

“Plus I saw him checking out my boobs!” Laura did not usually use the word
boobs
, or any other less-than-clinical term to describe her own anatomy. Reddish streaks appeared in her cleavage, as though her boobs themselves couldn’t quite believe the attention they’d received.

“He totally has a crush on you,” Jeff said, crossing his legs and leaning toward Laura’s desk. “It was really cute.”

“Sorry I missed it.” I pulled my lunch out of the bag and
lined up all the items on my desk: tuna fish sandwich, lemon-flavored iced tea, chocolate chip cookie. “Do all your students really call you ‘Miss Reagan’?” I asked.

She puffed out her lips and tapped her finger against them. “Yeah, I guess so. Why, what do yours call you, Amy?”

“Mostly they don’t call me anything, unless they need something. They just point, usually,” I said, twisting the bottle of iced tea on the desk. It made a chalky sound, and Jeff and Laura both stood up to put on their jackets.

“Sorry, guys, didn’t mean to drive you out.” I took a bite of my sandwich. They both waved.

I wondered when Jeff had last had sex, if that sort of thing was hard to come by in a town so small. Maybe he met people at the gym. He was always talking about going to the gym. When Jeff had first moved out from the East Coast, he’d been slender, like a dancer. He’d always had a really lovely, long neck. Now his neck just seemed like another part of his body. He was starting to look more like the locals, and more like we could have been related. After they were gone, I ate my lunch and then brushed my teeth in the bathroom.

On Thursdays, I taught my beginning creative writing course. I had twenty-five freshmen, most of whom were disinclined to believe me when I said that poetry didn’t have to rhyme and that stories didn’t have to have morals at the end. We sat around several large tables that had been pushed together sometime in the early 1980s, some years before my students were born. The room had no windows and smelled vaguely of body odor; it got worse in the spring when the layers
began to come off, like my students were twenty-five little onions, all waiting patiently to make me cry.

Paul sat on the other end of the table, directly across from me. There were other kids on his right and other kids on his left, but Paul was in the middle. Sometimes I closed my eyes and pretended that the other students vanished into thin air, not forever, but just for a few minutes, long enough for me to walk around the table and get a closer look without any distractions. The blackboard was on his side of the room, and I liked to use it to write out announcements that I just as easily could have sent in an email. If I was on that side of the room, I could look down at the part of his blond hair and the straight line of his nose. His side of the room never smelled like feet or farts or armpits. He smelled like cheap shampoo. I imagined him walking down the aisles of a drugstore, unscrewing bottles to sniff their contents. He would close his eyes, picture fields of lavender, buckets of April rain, orange groves.

“Who knows what ‘onomatopoeia’ means?” I asked the class, scratching the chalk against the blackboard.

They sat in stunned silence, staring at the blank pages of their notebooks as if hoping to find the answer written there. Paul looked at me over his shoulder, pale eyebrows raised. I guessed that he was eighteen, nineteen at the most. Some nights I lay awake thinking, you know, he could have taken a few years off after high school, he could be twenty. That would only put seven years between us, seven wasn’t much. But he wasn’t twenty. He was a teenager. Things that happen in seven years: Brad Pitt in Tibet. The itch.

“Buzz,” I
said, looking at Paul, and smiling. “Whirr. Fizz. Glug.” He turned back around and dutifully copied down the spelling.

I used a red pen to mark the students’ work. Mostly they wrote about being in college, or their hometowns, which were usually towns in either Ohio or Pennsylvania with a few stoplights and no hope for the future. Some of them enjoyed reading; these were the troublemakers. They’d stop using punctuation and stop making sense and think that they were Kerouac or, worse yet, Faulkner. Sometimes I would use a smiley face to let them know I was still being encouraging. I put polite check marks in random places on the rest of the pages and stuck them together with a paperclip.

The Story of Sushi by Trevor Corson
The Werewolf Prince and I by Marian Tee
Náufragos by Miguel Aguilar Aguilar
One More Time by Damien Leith
The Survivor Chronicles (Book 2): The Divide by Stevens, Erica
The Factory Trilogy 01 - Gleam by Tom Fletcher
Return to Tomorrow by Marisa Carroll
Alexis (The Love Family Series Book 6) by Kate Allenton
Dante's Angel by Laurie Roma
30 Guys in 30 Days by Micol Ostow