Otherwise Known as Sheila the Great 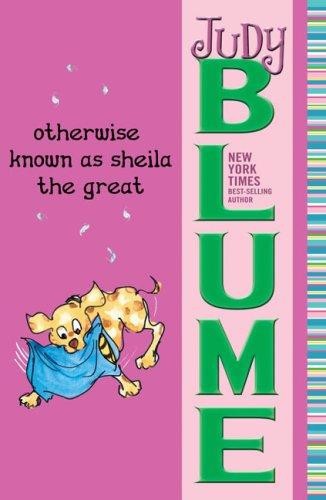 Otherwise Known As Sheila the Great

In loving memory of my father

And our special game of hide-and-seek

I'M glad there's only one more week of school before summer vacation. Today was so hot! My clothes stuck to me and my brain felt all tired out. I didn't even finish my math in school. So now I have to do it for homework.

I walked into the lobby of my apartment building thinking how good a big, cold drink would taste. I pushed the Up elevator button and waited. When the elevator got to the lobby Henry opened the gate and I stepped in. Just as he was about to take me upstairs Peter Hatcher and his dumb old dog came tearing down the hail.

"Please don't wait, Henry," I said. "The elevator's too small for that dog."

But Henry opened the gate and waited. "This elevator can hold ten people or the equivalent," Henry said. "And I figure that dog is the equivalent of a person and a half. So with me and you and Peter and that dog we've still only got four and a half people."

Sometimes I wish Henry didn't spend so much time thinking.

"Any time, Peter," Henry told him.

"Excuse me, please," I said, stepping out of the elevator. I held my nose. "I can't ride up with that dog. He stinks!"

My heart was beating so loud I was sure Henry and Peter could hear it. And I know Turtle, the dog, was laughing at me. He stuck out his tongue and licked the corners of his mouth. I'll bet he could taste me already! I walked down the hall with my head held high, saying, "P.U."

Henry called, "Ten flights up is a long walk, Sheila."

Henry was right. Ten flights up is a long walk. By the time I got to my floor I was huffing and puffing so hard I had to sit down on the landing and rest. Little drips of sweat ran from my face down to my neck. Still, I think it's pretty smart of me to pretend that I hate Turtle because he smells. I always hold my nose when I see Peter coming with him. That way Peter will never know the truth!

After a few minutes I wiped my face with the back of my hand and walked down the hail to our apartment. Mrs. Reese is the only person on our floor with a dog. And I don't worry too much about her. Because her dog is so small she carries him around in her arms. She calls him Baby and knits him little sweaters to wear in the winter.

I pushed open our apartment door and went straight into the kitchen to get something to drink.

"Is that you, Sheila?" my mother called.

"Did you have fun at Laurie's?"

"Yes," I said, gulping down a whole can of apple juice.

"Did you remember to bring home a quart of milk?"

Oh oh! I knew I forgot something.

I went into the living room then. My mother was reading a book. The record player was on and my sister Libby was twirling around in her pink toe slippers. She is thirteen and thinks she's a great ballerina. I could hold my nose for the way Libby dances, but I'd get into big trouble if I did.

My mother said, "You better go back down and get the milk, Sheila."

I flopped into the big chair that tilts back and said, "I can't, Mom. I'm dead. I just walked up the stairs."

"Don't tell me the elevator is out of order!" Mom said.

"Then why did you walk up ten flights of stairs?"

"Sheila, that was a very foolish thing to do in this heat," Mom told me. "Now go into your room and lie down for a while before supper."

"Yes, you do. Libby will go to the store and get the milk."

Libby did three flying leaps before she said, "Can't you see I'm in the middle of a record?"

"The record can wait," Mom said. "I need the milk for supper and Daddy will be home soon."

Libby used to say Mom, like me. But since she started junior high it's Mother this and Mother that. She is very strange.

Mom told Libby, "You can put a skirt over your leotard and nobody will notice." Then she looked at me. "Sheila, what are you waiting for? I said go and lie down."

"Okay. . . okay," I said. "I'm going." I took off my shoes and arranged them on the floor so that the toes pointed toward my bedroom.

I line them up every day before my father comes home. It's part of a private game Daddy and I play. I am always hiding somewhere and Daddy has to find me. His only clue is my shoes. I invented this game when I was seven and we've been playing it ever since.

Libby says when she was ten she acted a lot more grown-up than me. I think she missed out on some good fun. Anyway, Daddy would be disappointed if I stopped playing our game.

Libby and I share a bedroom. I stretched out on my bed while Libby turned the closet upside down looking for a skirt.

I didn't answer her.

Libby finally found a skirt and pulled it on over her leotard. "Then I'll bet it was Peter Hatcher and Turtle."

I put my hands over my ears to show I wasn't even listening.

Libby got back with the milk right before Daddy got home for supper. I jumped off my bed and crawled under it when I heard him say, "Hello, I'm home."

I knew Daddy found my shoes when he called, "Ah ha! I'm coming to find a Sheila!"

It really isn't very hard for him to find me. There aren't that many places where I can hide. We only have five rooms. Still, Daddy always pretends he doesn't have any idea where I might be.

When he came into my room he started opening my dresser drawers. He said, "Hmmm, no Sheila in here. No Sheila in there either."

I laughed. Daddy knows I wouldn't fit into a dresser drawer. And as soon as I laughed he lifted my bedspread and looked under the bed.

I crawled out and kissed Daddy hello. Libby walked in then. "I don't think you should encourage her to be such a baby," she told Daddy.

"Then why don't you stop playing baby games?" Libby asked.

"I'm not on anyone's side," Daddy said. "Let's forget about this and go have our supper. I've got some news for you."

I was sure Daddy's news would be about our summer plans. We've been waiting and waiting to find out what we're going to do this summer. I wanted to take a trip to Disneyland but Mom and Daddy said
That's out of the question
.

When we sat down at the table and started to eat Daddy said, "We got the house!"

I wish people would stop calling my father Buzz and start calling him Bertram. That's his real name. I feel so silly having a father named Buzz.

"In Tarrytown," Daddy told her. "It belongs to a professor at Marymount who's spending the summer in England."

My father is a professor at Marymount College too. He teaches English. Libby says when she is old enough to go to college she is not going to Marymount because there aren't enough boys around there. Libby thinks boys are
very
important. Libby is sick!

"It sounds nice," Mom said. "Anything's better than the city in July and August."

"I hope there's something to do in Tarrytown," Libby said. "I really wanted to go to the beach this summer."

I happen to know that is because Libby has a new bikini and she wants to show it off.

"You'll like Tarrytown," Daddy told Libby. "There's a pool down the road from our house and there's a very good day camp. . . . "

Libby interrupted. "I'm much too old for day camp, Father! You know that."

"Not this one," Daddy said. "it's special. You can't even go if you're not at least ten. It's a cultural arts camp."

"I'm no good at art, Father. You know that too," Libby said.

Then Mom and Daddy got these big smiles on their faces. I'm sure they knew all along that Libby would be very happy once she found out she could spend the summer on her dumb old toes!

Velvet Underground&#39;s The Velvet Underground and Nico by Harvard, Joe
Deliver Me From Evil by Alloma Gilbert
Across to America: A Tim Phillips Novel (War at Sea Book 9) by Richard Testrake
A Place Within by M.G. Vassanji
SEAL's Baby (Navy SEAL Secret Baby Romance) by Naomi Niles
Vengeance (The Kurgan War Book 4) by Richard Turner
Steel Gauntlet by Sherman, David, Cragg, Dan
Extrasensory by Desiree Holt
The Shadow of the Soul by Sarah Pinborough
Legal Tender by Scottoline, Lisa