Read Out Of The Ashes (The Ending Series, #3) Online

Out Of The Ashes (The Ending Series, #3) 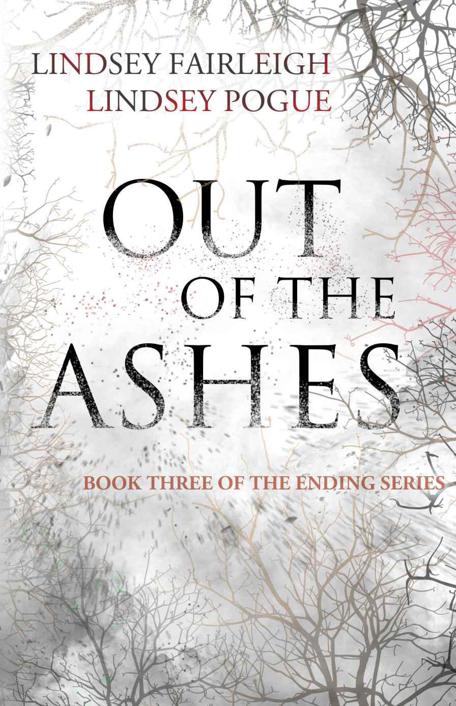 OUT OF THE ASHES

book three
of The Ending Series

This book is a work of fiction. All characters,
organizations, and events are products of the author’s imaginations or are used
fictitiously. No reference to any real person, living or dead, is intended or
should be inferred.

Out Of The
Ashes

For
the Endingers. Your love of the series and its characters make writing it so
much more fun than it already is!

Can’t get
enough of The Ending?

Body tense and
heart racing, Jake scoured Zoe’s face for
any
inkling of recognition. He
couldn’t allow himself to believe she had no memory of him or all they’d been
through together. She’d admitted she loved him only hours earlier. Now, she was
scared, casting furtive glances around the room at friends and family she
clearly didn’t remember
—
including him.

In the dying
moonlight seeping through the undressed windows, Jake watched her, desperation
making it hard for him to breathe. Her eyes…he couldn’t tear his gaze away from
her teal eyes.

Zoe studied the
two women in front of her, taking in Chris and Dani before settling her gaze on
her brother, Jason. Her wide
, appraising
eyes narrowed and her chest heaved, like she was frantically trying to remember
him. Her gaze lingered a moment longer without a hint of recognition, and then
landed on Jake. He could see the confusion and fear warring within their
depths, making his heart ache and his conscience cloud with an undeniable guilt.

He shouldn’t have
left her alone on the golf course.

Her head tilted
slightly as she considered him, and he prayed there was even the slightest
nagging familiarity.
Remember,
he silently pleaded. But seeing no
recognition of him—of
them
—reflected in her eyes, he knew the Zoe
standing in the room, looking at him like he was a complete stranger, was only
a shadow of the woman he’d fallen in love with.

His grip on the
doorframe tightened so hard he thought the wood might detach from the wall. Zoe
was terrified, and for the first time since he’d met her, there was nothing he
could do to help her. He fought the instinct to go to her, knowing that if he
did, he would frighten her more, and then he might risk losing her completely.

Unable to stand
the tension any longer,
unable to bear the feeling of loss and his encroaching
devastation,
Jake turned and
strode out of the suffocating room. Each step provided distance, and the more
distance he put between them, the easier it became to breathe. He couldn’t get
away fast enough.

Cooper, his
loyal-friend-through-it-all
h
usky, trailed behind him, panting and
trotting to keep up as Jake made his way down the hall. He needed space…needed
air. Continuing toward the kitchen, he hoped the fresh air beyond the sliding
glass door would give him a clearer head. But regardless of how quickly he
strode through the house, the image of Zoe’s fearful eyes remained, permanently
projected in his mind, a constant reminder of his failure to protect her.

His hands fisted
at his sides. He’d known something wasn’t right when
she
said she felt strange outside the Colony,
and if he’d
have
just stayed with her instead of leaving
her side to help Harper, she might not have run off…she might still be
her
.

With a roar, Jake
spun toward the wall. His fist met the hard, textured surface in unbridled
anger. His knuckles cracked beneath his skin as they barreled through a layer
of drywall, but he barely noticed. Bracing his hands against the wall, he tried
to catch his breath
,
to stop his mind from spinning out of
control.
They’d already been through so much…why was this happening?

Hearing Dani and
Zoe’s muted voices in the bedroom down the hall, Jake turned away from the hole
his fist had made and continued into the small kitchen, then stopped. With a
heavy sigh, he leaned against the Formica countertop, not ready to go outside
with the others. Not ready to answer questions.

Almost
immediately, Jason came through the doorway behind him. In two steps he was at
the counter, gripping the ledge, and in the dim light pouring through the
sliding glass door, Jake could see the hard set of his features.

“I can’t blame
the Colony this time,” Jake said. “I knew something was wrong.” Zoe was
infuriating and stubborn, but she wasn’t stupid; she wouldn’t have just run off
for no reason. But without her memory, there was no way to know why she’d done
it.

With a yawn,
Cooper lay down on the linoleum floor, his eyes angling up to Jake and then to
Jason, ensuring that, even in their silence, they were still standing there.

After what felt
like a few minutes, Jason grunted and shook his head. His shoulders were tense,
and Jake could almost feel the apprehension rolling off him in waves.

Jake couldn’t
help but wonder if Gabe—his best friend turned traitor—was to blame for all of
this. Despite their friendship as children, Gabe had brought soldiers into
Jake’s home, ready to take his sister, Becca, away from him, and then he’d lured
Dani into the Colony for the General. Had he been involved in what had happened
to Zoe, too?

“What a fucking
mess,” Jason said, shaking his head. “I guess I’ll just keep nulling her, at
least until—”

The sound of
footsteps approaching brought both men’s attention to the hall doorway. Chris
spoke softly, Zoe’s hand resting in hers as they entered the kitchen, Dani and
Jack, her German
s
hepherd, close behind them. Though Chris
and Zoe were both grown women, the image of them walking hand
in
hand resembled that of a mother and child.

Jake’s eyes met
Zoe’s as she was led past him; hers were shrewd and penetrating. They were the
same eyes that had affected him so intensely the first moment he saw her, their
brilliance and expressiveness capturing his attention—his soul—in a way no
other woman ever had. Regret and anger gnawed at him; he’d never told her any
of that, and now she might never know how he felt.

Her eyes
fixed
on him. He could tell from the way Zoe
walked—with less fortitude and more uncertainty—that she was a poorly made
replica of
his
Zoe. But she was a version of her, nonetheless, and like
always, the bottomless depths of her eyes housed her every emotion:
embarrassment
—
curiosity
—
confusion.
Jake was grateful she didn’t seem to be afraid, and he knew he had Chris’s
Ability to curb Zoe’s unease with a single touch to thank for that.

Chris whispered
something inaudible, and Zoe’s gaze shifted to the sliding glass door. They
stepped through and outside, heading toward the rest of the group and the
horses waiting in the early morning shadows, Dani’s dog traipsing after them.

Dani, however,
hung back in the kitchen. She moved closer to Jason, her gaze darting between
him and Jake. With her broken arm, swollen and bruised face, and hunched
shoulders, she looked like she’d been the General’s punching bag while held
captive in the Colony.
She gave him a
sidelong glance.

Jake stopped
breathing. His anger drained from him, his stomach knotting with fear.

He exhaled slowly
and rubbed his hand over his face harsher than was necessary, fighting to
maintain what semblance of composure he had left. Clara’d had it out for Zoe
from the first moment they’d met. Back at Fort Knox, she’d poisoned Zoe in a
desperate attempt to get rid of her, then attempted to kill them
all
in
the
barracks fire that had claimed several
lives. And now she was here, in Colorado, trying to hurt Zoe
again
.

White
-
hot rage and self-loathing scorched through
Jake, and he clenched his shaking hands
into fists
. He should’ve left
Clara in the hospital where he’d found her,
pleading
and scared.

“Dead,” he
repeated hollowly. Clara might’ve been dead, but not before managing to strike
one final blow.

Dani’s eyes met his
for a brief moment before settling back onto Jason’s. “Did you tell them about
the T-Rs and the memory wiping?”

“It looks like
that’s what happened to Zo…sort of. Clara started the process, got
interrupted…at least now she’s
gone for good
.”

Jake studied Dani.
“How do you know for sure?” he asked.

Dani smiled
weakly and shook her head, wisps of her curly red hair escaping the braid it
was gathered into. “My contact said so,” she said. “I trust her…at least with
this.” She glanced between them once more, like she wasn’t quite sure of
something. “There’s more, but we should probably get going.”

Jason reached for
her, lacing his fingers with those of her good hand, and nodded. “We’ll figure
the rest out on the way to Colorado Trails,” he said. “We’ve got to get moving
or Ky and the others will think something’s happened to us.”

The sliding glass
door opened
,
and Becca stepped into the doorway. She
glanced between Jason and Dani, and even though she still didn’t seem to
believe that Jake was her brother, her eyes found and locked with his. “We
should go,” she said, her voice raspy, as it had been since she was young. “I
have had a vision. If we do not leave soon, the General will find us.”

“Shit,” Jason
muttered, and Becca turned slowly and exited the kitchen, leaving the door open
behind her.

Dani led Jason
toward the sliding glass door
,
h
is imposing form dwarfing
her petite, battered one. Part of Jake wished Zoe’s wounds were as
straightforward as bruises and broken bones;
those
wounds would heal
. W
hat Clara had done to her might not.

Feeling
deflated, Jake followed after them.
Once again, Zoe was right in front of him, but as unreachable as though
she were miles away; it infuriated him. While Clara’s first attempt to kill the
only woman he’d ever loved had inevitably brought Zoe closer to him, Clara’s
final
attempt
might have
succeeded in tearing her away completely.