Read Over the Knee Online 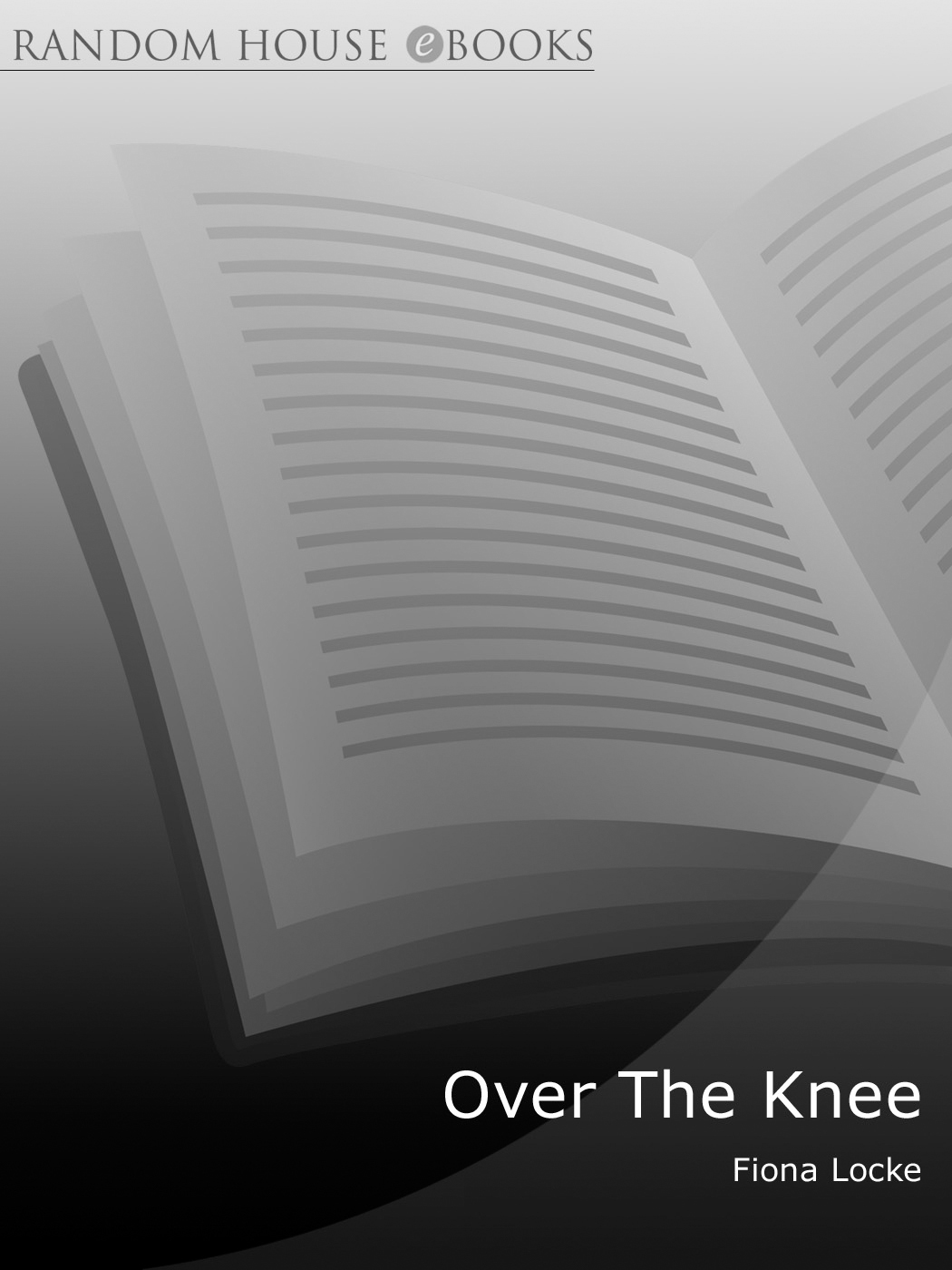 Also in the Nexus Enthusiast Series

Her hand rested lightly on my botton and gave it a gentle pat. Then she lifted my tartan skirt. She slipped my knickers down and a delicious shiver ran down the stepping-stones of my spine.

Her cool hand caressed my cheeks in slow circles, savouring its smooth whiteness.

‘Now,’ she said. ‘I’m going to give you a spanking you’ll never forget.’

All her life Angie has been haunted by one compelling and painful obsession: she wants to be punished. Specifically, she wants to be spanked. At first she found the yearning confusing. Then it was tantalising. Now it is all-consuming. Soon Angie finds herself immersed in the world of corporal punishment and its enthusiasts. Her new friends expose her to every aspect: sexual, disciplinary, role-play …

Fiona Locke is a popular short story author from the Black Lace Wicked Words series, now transferring her talents to the novel.

Other titles available in the Nexus Enthusiast series:

UNDER MY MASTER’S WINGS 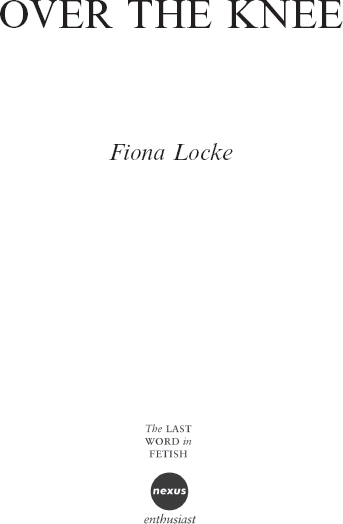 Standing in the corner, I place my trembling hands on top of my head. The movement causes the punishment gown to lift and the flaps fall to either side, revealing the pale tender cheeks of my bottom. The air is cool against the unprotected skin, heightening the feeling of exposure. I lace my fingers tightly together to still the tremors. Behind me, on the edge of the school desk where I have placed it, the birch rod waits. I feel its presence like a ghostly chill in the room
.

Soon I will hear the slow purposeful tread on the stairs. It might be five minutes or fifteen. But I must be in position when he comes to punish me. In the corner, he wants me to reflect on what I have done. Or rather, not done
.

Downstairs in the entrance hall, the grandfather clock ticks away the seconds. I try to count them, to mark the passing time. But it’s impossible to concentrate on anything but my impending punishment. The burning stripes he will paint across my bottom
.

I had to make my own rod. It’s part of the punishment. It’s a short walk out to the small stand of trees in the woods behind the house, but the reason for my visit makes it seem much longer. I know what he expects and I dare not return with switches that are too flimsy. I’ve learnt that lesson
.

I cut thirteen slender sappy switches, the straightest I could find. I took them back to the house and bound them into a bundle. I’m always afraid of meeting someone on the way back, but so far I’ve been lucky. I don’t know what I’d say
.

I presented the rod to him for inspection and he nodded his approval and told me quietly to change and wait for him in the schoolroom. I took the rod back upstairs, staring at it with frightened eyes, knowing that in a short time it would be in pieces on the floor while I cried and atoned for my misdeeds
.

Finally, I hear his footsteps. The agony of waiting is almost over. The floorboards creak as he enters the room and stands behind me. The flaps of my gown sway slightly at the displacement of air, tickling my thighs. I can feel his eyes on me and I try hard not to fidget
.

I creep from the corner and stand before him, ashamed and apprehensive. My unfocused gaze rests on the oak floorboards, chilly beneath my bare feet. But he waits until I raise my eyes to his face
.

My fingers feel glued together, but I pry them apart. My arms ache from the position they’ve been in. How long has it been? I cannot tell
.

I pick up the rod. Individually, each switch is almost weightless, but bound together they are capable of astonishing pain. It’s like a hybrid of cane and whip and I fear it above all other implements. My respect for it borders on awe. With shaking hands and downcast eyes, I present it to him
.

He swishes it through the air and I flinch. With the rod he indicates the birching block against the wall. I implore him with my eyes, knowing it will do no good. He waits. The silence is intolerable. I fetch the block and place it in the centre of the room. Then, reluctantly, I kneel on the lower step. Bending right forward over the upper step, I place both hands flat on the floor. The position raises my bottom high in the air, with my head much lower. The gown parts even further and my sense of exposure is complete. A deep flush spreads over my body and I close my eyes in dread
.

He lays the birch against the vulnerable flesh of my bottom, tapping it lightly to measure the first stroke. ‘Two dozen,’ he says. ‘Count them
.’

A traditional form of punishment in which a series of slaps or smacks are delivered to the buttocks, usually with the open hand
.

EVEN THE DEFINITION
was enough to make me squirm. I couldn’t pick up a dictionary without looking it up. And all the attendant words: whip, thrash, flog, paddle, strap, cane, punish, discipline. For as long as I could remember they had held a special power for me.

I’d never been spanked in my life, so I had no idea where my strange fantasies came from. My parents were permissive and inattentive. And while corporal punishment technically still existed at my school, I didn’t know anyone who had actually received it. The cane was little more than an urban legend. Instead, my teachers assigned detention and made us write lines. I hated both. And yet the very concept of punishment and someone authorised to administer it tickled something deep inside.

I often wondered if I’d have felt the same if the cane had been a real threat. And if I’d been bad enough to earn it, would the cane have reformed me? Or would it only have left me wanting more?

Mr Ellis, the history master, was fond of reminiscing about ‘the good old days’, when teachers used the cane and slipper. ‘Pupils knew the meaning of discipline back then, by God,’ he would rant. But he was a blustering ex-army
power
tripper. A bully with no true authority. No one took him seriously.

The headmaster, Mr Chancellor, was another matter. Soft-spoken and eloquent, his old-world features and public-school education seemed out of place at Ravenscroft School. I hung on his every word in assembly, lost in the sound of his voice, no matter how dull the subject. I never confided my schoolgirl crush to anyone; my friends would only have teased me.

Only the headmaster had authority to cane. And while I’d never heard of Mr Chancellor caning anyone in my time, he must have done it in the past. I couldn’t stop thinking about it. It led me into fantasies. Internal re-enactments of scenes I’d read in vintage school stories and Victorian novels.

Before long, the images began to preoccupy me. They became intrusive, dominating my thoughts. I couldn’t rid myself of the confusing feelings they evoked. If I saw a picture of an actor or a musician I liked, I would picture myself being spanked by him.

Then, one day in assembly, Mr Chancellor brought the flat of his hand down sharply on the lectern to emphasise a point. My pulse quickened as I imagined his hand coming down like that on my bare bottom. The image consumed me with shame and embarrassment. But for the first time I understood the source of my confusion. I glanced furtively at my classmates, certain that they could see the disgusting thoughts in my mind, certain that the word ‘pervert’ was emblazoned on my forehead.

That one moment marked a definite sexual awakening for me. A revelation. I suddenly understood exactly what I was into. No wonder candlelit romance stories left me cold. I didn’t want to be a pampered princess. I wanted to be dominated. I wanted a man who would punish me.

And right then I wanted Mr Chancellor to punish me.

There was only one problem: I was a good girl. Despite my parents’ disinterest, I went to my lessons and did my homework diligently. My record and my character were unblemished. So my decision to play truant one day was a
hard
one to make. But I had no choice. It was a serious offence – one that would warrant a visit to the headmaster.

Most girls would have enjoyed their day off, but I spent mine in guilty paranoia. Several times I regretted my decision and was on the verge of going back to school, concocting whatever flimsy excuse I could to explain my tardiness. Tardiness was nowhere near as serious as truancy. But I managed to screw up my courage and stay away. I had to do this.

The next morning my hands shook so much I could barely knot my tie. And I felt faint when the English master read the note he’d been given and announced brusquely, ‘Angela Harker, you’re to report to the headmaster’s office immediately.’

A collective gasp reinforced my sense of having crossed the line. My fellow pupils were aghast. Swotty had been summoned to the headmaster! What could I possibly have done? Their expressions of stunned disbelief stayed with me all the way down the long corridor.

Smartly turned out in my crisp white shirt and striped tie, I pictured myself submitting to physical chastisement. Would Mr Chancellor order me to lift my dutifully ironed skirt? Or would he do it himself?

My stomach churned with anxiety. I was a bold but reckless explorer taking my first steps in an unknown hostile land. Armed with an all-consuming desire to confront my obsession, I knew the experience would change me forever.

After an eternity, I reached my destination. The headmaster’s secretary, Mrs Willis, eyed me with cold disdain and waved me towards the row of hard plastic chairs outside Mr Chancellor’s office. On the wall opposite a bland monochrome clock loudly counted the seconds as its bent second hand lurched from one number to the next.

I sat down, imagining myself as the last girl in a long queue of miscreants sent here to be dealt with. I fancied I could even hear the terrifying swish of the cane from within. The headmaster didn’t enjoy it, of course. He was just doing his duty. His motivation was purely disciplinary.
And
that was the element that obsessed me the most. I didn’t want it for sexual reasons; it had to be punishment. The fact that I did really want it was my little secret.

My train of thought was making me feel dizzy and overheated. My lungs felt too weak to expand fully. And the interminable ticking was beginning to wear on my already ragged nerves. I shook my head to banish the images, afraid he would sense the true motive behind my misdeed. My shoes scuffed back and forth on the floor as I swung my legs nervously.

Mrs Willis raised her head and glowered at me, completely unsympathetic to the fear anyone would feel in my position.

Chased by a Stranger (Craved Series #3) by Kelly, Hazel
Candy Darling by Candy Darling
Cold in the Shadows 5 by Toni Anderson
Taking Pity by David Mark
Shroud of Shadow by Gael Baudino
Writers of the Future, Volume 28 by L. Ron Hubbard
The Devil May Care by David Housewright
The MaddAddam Trilogy by Margaret Atwood
My Husband's Son: A dark and gripping psychological thriller by Deborah O'Connor
The Law of Angels by Cassandra Clark