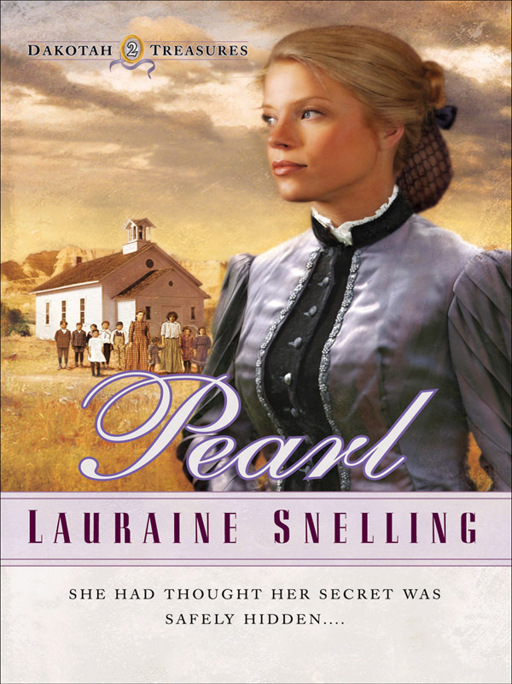 D
AUGHTERS OF
B
LESSING

Pearl
is dedicated to all the daughters God has given me, not to replace Marie but to make her absence easier.

LAURAINE SNELLING is an award-winning author of over forty books, fiction and nonfiction, for adults and young adults. Besides writing books and articles, she teaches at writers’ conferences across the country. She and her husband,Wayne, have two grown sons and two dogs and make their home in California.

Historical societies are great research places for historical writers, and for this new series I thank the North Dakota Historical Society at Bismarck and Diane Rogness, the curator at the Chateau de Mores in Medora, for information and early pictures, of which there are few, of Little Missouri. Doug and Mary at the Western Edge Bookstore in Medora added bits and pieces to this series and directed me to the most helpful books and maps.

I am blessed with the most able and helpful assistant in Cecile, who has learned she is part brainstormer, part editor, part encourager, and part researcher. When she came to work for me, she didn’t realize she would lose sleep over the characters in these books.

Thanks to husband Wayne for becoming more expert in the care and feeding of a writer under deadline and for the research, reading, and remembering he contributed. It sure helps to be married to a man who can pull historical dates out of his mind without looking them up and who enjoys being a partner of this writing life of ours.

My editor, Sharon Asmus, and all the staff at Bethany House Publishers did their usual fine work, for which I am extremely grateful. I waited a long time for an agent, and Deidre Knight has helped make my writing life both simpler and more diverse. Thanks, all of you.

Once a teacher, always a teacher
.

Pearl Hossfuss stared at the line she’d written in her most perfect script.
That is the story of my life, the rest of my life for however
long it may be
. Was that a sigh of despair or acceptance she felt working its way up from her toes?

‘‘Miss Pearl, your father said you are late for supper.’’ The maid stood in the doorway, a quick glance over her shoulder giving the impression she would rather be anywhere than where she was at the moment.

‘‘Thank you, Marlene. I’m sorry you had to come searching for me.’’ Pearl corked her inkwell and stood, tucking her hair into the gentle wave that, along with the high-necked waist, covered the scar on her neck. She glanced in the mirror as she passed the oak-framed oval mirror. No sense in not being perfectly groomed. She’d been sent back to her room more than once to repair an imperfection.

She touched the cameo at the neckline, her talisman, the last gift from her mother. Would her father even remember that today, March fifth, was the tenth anniversary of her mother’s death? Not that he would say anything, of course.

She made her way down the curved and carved staircase, the gas-lit chandelier on the landing dispelling the gloom of a gray day. The light reflecting off the Venetian crystals was a sight that never failed to lift her spirits.

‘‘I’m sorry I’m late. I was studying for tomorrow.’’ She made her way to the chair at her stepmother’s left hand, where she had sat ever since Amalia joined the Hossfuss family a year after Pearl’s mother died. Her father had at least paid tribute to the strictures of society regarding the year of mourning.

The way he snapped his napkin and laid it across his lap told her he would have more to say later on the subject of her tardiness. Muttonchop whiskers, two shades darker than his sandy hair, bristled. Gold-rimmed glasses perched low on a nose as regal as a Greek god’s.

Eleven-year-old Jorge Bronson Hossfuss Jr., a miniature of his father, sans glasses, in appearance only, glanced at her from lowered eyes, one twitching in a wink. If it weren’t for the antics of Jorge, life in the Hossfuss mansion would be far more sober.

‘‘Let us pray.’’ Mr. Hossfuss, the name still called him by his wife, bowed his head and began without waiting to make sure everyone did the same. He just expected it.

The Norwegian words flowed around the table, a daily reminder of their heritage, a heritage that Jorge Bronson Hossfuss Sr. had capitalized on as a way to the wealth that built a warehouse, office buildings, and as Pearl recently discovered, some of the tenements where her pupils lived, as well as the Hossfuss estate on Lakeshore Drive.

Pearl brought her thoughts back in time to join the others in the amen. Was that why her father allowed her to teach at the settlement house? As a way of atonement for his investments? Or, as she had suspected more than once, was it because teaching was the only permissible position for his elder daughter who refused to become a leader in the society where his new wife thrived? After nine years of marriage, Amalia was not new, but Pearl always thought of her that way.

‘‘Thank you,’’ she responded as the maid set a gilt-edged flat bowl centered on a matching gilt-edged plate in front of her. Fish ball soup tonight. Inga, direct from the old country, cooked all manner of meals but was truly in her element when she could serve true Norwegian fare.

‘‘How was school today?’’ her father asked his son.

‘‘All right. I made an A on that composition about the wreck of the
HF,
thanks to the information you gave me.’’

Mr. Hossfuss shook his head. The
HF,
standing for Hoss Fuss, had been one of his ships, veteran of many Atlantic crossings, but had sunk in a freak storm on Lake Michigan.

‘‘And you, Pearl, have you a good report also?’’ His mandatory question asked, he nodded to the maid to remove his soup dish.

‘‘Yes.’’ But she made no effort to continue. He never bothered to listen.

‘‘Mrs. Smithson said that she’d heard your headmistress saying what a superb teacher you are.’’ Amalia patted her mouth with her napkin. ‘‘I know that makes your father very proud of you.’’

Pearl knew no such thing. Once, back when she was his princess, she had thought that, but no longer. He did his duty by her—he would never bear to have someone say he had shirked his duty—but with that taken care of, he relegated her to things past.

Wishing she were up in the nursery with the younger children, Pearl finished her dinner, waited for her father and stepmother to adjourn to the parlor for their evening together, then she and Jorge headed for the second floor in the west wing, the floor devoted to children.

‘‘Did you see the stage since I remade it for Arnet and Anna?’’

‘‘So they will be able to give their first performance for Father’s birthday?’’

‘‘Right on schedule. He’ll have to believe you had a hand in the script.’’

‘‘No one will tell him.’’ She’d already made sure of that. All the credit would go to Arnet and Anna who, while they were ten months apart, looked more alike than many twins.

He better
. ‘‘Of course he will. After all, it’s about when he came to America. How many times has he told you the story?’’

Jealousy was one of the seven deadly sins, and Pearl had to fight it off on a regular basis. On one hand she rejoiced for her younger brothers and sister, but on the other, if only her father would grace her with the smiles she remembered from before, then . . . But it was always
before
. Before life had changed in an instant. Accidents happened. That’s why they were called accidents.

‘‘Are you having your class do a play this year?’’ Jorge asked.

‘‘I’d like to.’’ Ignoring the memory of the extra long hours she’d put in to make the play a success, she thought only to the faces of her pupils, the smiles, the excited jabbering, the fear overcome. Could she manage to create such a production again, or had her children last year been especially gifted?

She turned to her brother. ‘‘
Tusen takk
and more.’’

He sketched a bow. ‘‘You have no idea what it will cost you.’’

Her laugh made his smile widen.