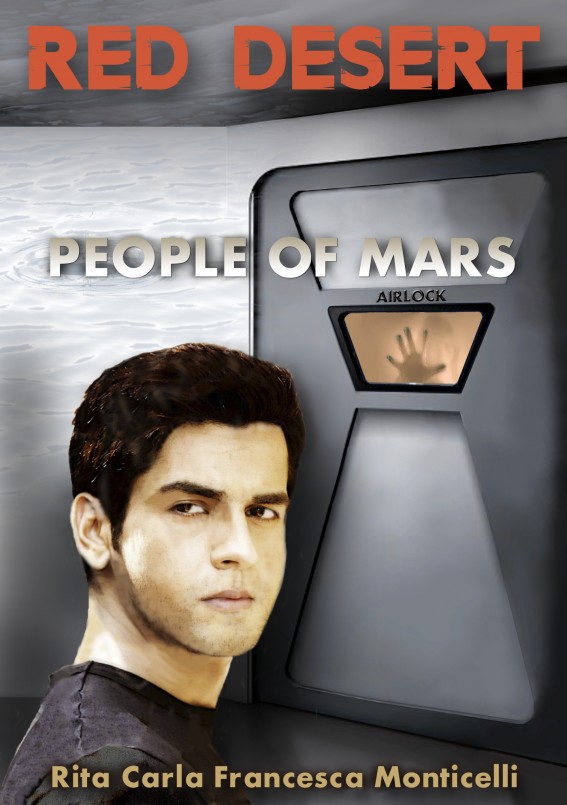 Do you want to know what happens
next?

Do you want to keep updated on the next
publications?

Important note to the
reader
: This book is
written in British English.

Previous book
of the series: “Red Desert – Point of No Return”

The metal taste was
the first thing she recognised. It was her blood. A buzz resounded
in her brain, louder and louder, drumming in her left temple, where
it hurt most. The weight of her head was resting on it; the cold
floor under it. She opened her eyes, disoriented. A coughing fit
shook her sore body with violence.

In a moment she
remembered.

He was there. What was
he doing? He had hit her in the face over and over again, until all
had disappeared.

She snapped up into a
sitting position, ready to react to the aggression, but there was
nobody except her in the room. It wasn’t even the same room.

What was that
buzz?

Before her a closed
door, behind her another closed door. A red warning light blinked
on a control panel. The muffled sound was becoming clearer and the
buzz turned into a soft alarm.

Michelle’s face
contracted in horror when she realised she was inside an
airlock.

She raised her hands
to her mouth; then she looked at them. She wasn’t wearing a suit.
She studied the blood on her fingers, while trying to offer an
answer to the thousands of questions tormenting her. Perhaps, if
she had let herself go, she would’ve woken up in her bed and found
out that it was all a dream, that Dennis was still alive, that
nobody had shut her inside an airlock, that there was no alarm
notifying the forced opening had been activated, and that the exit
door would not open in twenty seconds.

But it wasn’t a
dream.

At last she reacted.
She dragged herself to the wall. She stood up. She reached the
control panel and placed her hand on the touch-screen. It should
have detected her presence and recognised her fingerprints, but
nothing happened.

“Attention. Emergency
forced opening in fifteen seconds.” The synthesised voice of the
computer was saying that as if it was something normal, with the
same cordial tone of a person informing you that lunch was
ready.

“
No, no, no!” She heard those words coming out from
her mouth, while hitting the panel, trying to reactivate it. But it
was all useless; she knew it had been locked.

But it would be no use
seizing the supports. She wasn’t wearing a suit. She had to get out
of there, right now.

She gathered all her
strength and rushed to the door separating the airlock from the
interior of the station. She placed a hand on the opening sensor,
but her gesture was ignored. So she grabbed the manual opening and
tried turning it. Her bloody hands slipped on the handle, which
didn’t move at all. She started hitting the soundproof, double
glass of the small window in the door that overlooked the adjacent
room. Her wedding ring tinkled on the glassy surface.

Then she saw him. He
was there, looking at her. His face was serious, his gaze hard,
pitiless. She could barely recognise him as one of those persons to
whom she would have entrusted her life without hesitation, after
all the time shared together. And he was now taking it.

Michelle emitted a deep scream of rage, inaudible
to her assassin, while the AI enunciated the last seconds of the
countdown.

The alarm ceased, the
warning lamps stopped blinking on the control panel, the computer
fell silent. For a brief instant the woman thought the procedure
had been interrupted. She hoped so.

Then there was that
dull sound. She felt drawn from behind by an invisible force. She
stretched out both hands in the desperate attempt to grab the
handle, but she just managed to brush against it with her
fingers.

Her body speeded up, light as a doll, throwing
itself towards the space between the jamb and the exit door. The
gap became wider and wider, but not yet big enough to let her pass
through it.

She struck the metal.
Her neck rotated in an unnatural way, her head collided with the
shutter. After a few seconds the pressure balanced and her body
slipped to the floor, half inside and half outside the door as it
finished opening. The tissues were already swelling.

But death had pity on
Michelle and took her away, before they started tearing.

She addressed a
nostalgic look to the living room. Without furniture it didn’t seem
the same place where she and Jan had lived many happy moments.

There was still the
same pungent odour though. She had always wondered where it came
from. Many times she believed she’d got rid of it, by opening the
windows and letting the air circulate, but when returning after
being away for a long while, she always found it had come back.

It had driven her
crazy for years and that seemed so silly now. Just like all the
times she got angry, because he used to leave various objects
scattered around the rooms and then couldn’t remember where he’d
put them. She had accused him of always being lost, along with his
characters, in his imaginary worlds, neglecting the real one.
Neglecting her. Now, while perceiving that smell again, she’d like
to have had everything back, including the fights about his long
absences during the promotional tours. Or those about the teabags
abandoned on the table in the living room, which had stained its
surface.

The table was still
there. So damaged, perhaps, it wasn’t worth taking it away. It
would be no use to anybody. Maybe Jan had decided to leave it,
because it never meant anything particular to him. It was just a
table, emitting a pungent odour.

The mobile phone
started vibrating, transmitting a bizarre sensation to Milja’s
hand, which still rested on the surface of that old piece of
furniture.

She fixed her gaze on
it. She should call Jan to inform him. But who cared in the end?
Whoever was calling, it would stop vibrating sooner or later. By
instinct, she let her fingers slip to almost touch it. In spite of
the time that had passed and all that happened, she was curious to
know who was calling him after ten in the evening. She looked
around, pricked up her ears, waiting to hear him coming, but he
didn’t appear. She grabbed the phone and looked at the display.

She felt a stab of jealousy. After almost four
years it was still burning.
She tapped the reply icon.
“Allô?”

“Here it is!” Jan’s
voice resounded in the empty corridor.

Milja put down the
cell phone and stepped away from the table, just before he entered
the room.

“I knew it might still
be here somewhere,” he said, showing her a big, golden filigree
brooch, with a triumphant smile. “But I literally had to dismantle
the flat to make it come out!”

She couldn’t help but
smile as well. That contagious enthusiasm of his for the smallest
things reminded her how much she had loved him. And how much,
perhaps, she still loved him.

“Where had it ended
up?”

“It appeared by magic,
when they separated the various parts of the wardrobe in the
bedroom. Maybe it had fallen behind a drawer and got stuck in the
bottom.” He handed her the jewel, which she gathered in her hands.
“It was a bit bruised, but I got it fixed.”

“Oh, thanks, but it
wasn’t necessary.” She gazed at the brooch. Actually she had never
liked it that much and therefore hadn’t got worried at all about
its disappearance.

“But I didn’t do that
for you,” Jan replied, at once strangely serious. “I did it for
your mother, who gave it to you. Now, maybe, she’ll hate me a bit
less about the divorce.”

Milja started
laughing, thinking about all the not really kind ways in which her
mother described her current ex-husband. “Sure,” she commented, in
her laughter. “Everything’s going to be alright between the two of
you now.”

This time it was Jan
who laughed out loud.

She stole a glance at
him. How many times they had had fun that way, talking about their
respective parents. For an instant it seemed to her that they’d
gone back in time, before the divorce, before Anna, when they were
still happy. She found herself thinking they could live those
moments again, in the future.

They stopped laughing
and looked at each other in silence. Maybe he’d thought the same
thing. Sure he had.

“But,” Jan said,
breaking the moment of embarrassment. “You shouldn’t have come this
far to get it. Not at this time of the day. I could have come over,
tomorrow.”

“Oh, no, don’t mention
it. I was in the area and had nothing better to do.” While
speaking, she couldn’t help but stare him in the eye. “So I said to
myself: let’s go and pay a visit to my ex-husband, before he leaves
this city forever, and have a last look at this house, which was
once mine too.”

“But you hated it,” he
commented, tongue in cheek.

“You’re right … but it
wasn’t the house’s fault,” she said, playing along.

“Are you busy
tonight?” she asked with nonchalance, moving a bit closer to him
and hoping he wouldn’t notice her nervousness.

But Jan froze and
scrutinised her, uncertain.

“
A last going out together, as an ex-couple, before
you leave.” She combined her words with a gesture of her hand, an
imitation of a plane, and then she winked at him.
‘Come on, what have
you got to lose?’

She knew it was her last chance with the man she
couldn’t forget. She knew him so well. Who knew with how many women
he had been since he separated from Anna? In the end what was wrong
with a
reunion
? They
were both adult, and they had a past with some good moments. There
was still an attraction between them, she was sure of that. Maybe,
if he let himself go, he would realise they might have more good
moments.

Her seductive look
vanished, replaced by the humiliation she was feeling at being
rejected.

Milja stepped back,
choking back her tears. She wouldn’t give him the satisfaction of
seeing her weep again. No.

“It’s nonsense,” she
exclaimed, in rage. “You’re still thinking about her! She left you
to go … to another planet. And you are here dying for her. I don’t
recognise you anymore. What has that woman done to you?”

Now she was shouting,
but she didn’t care. She wanted him to see all of her contempt.