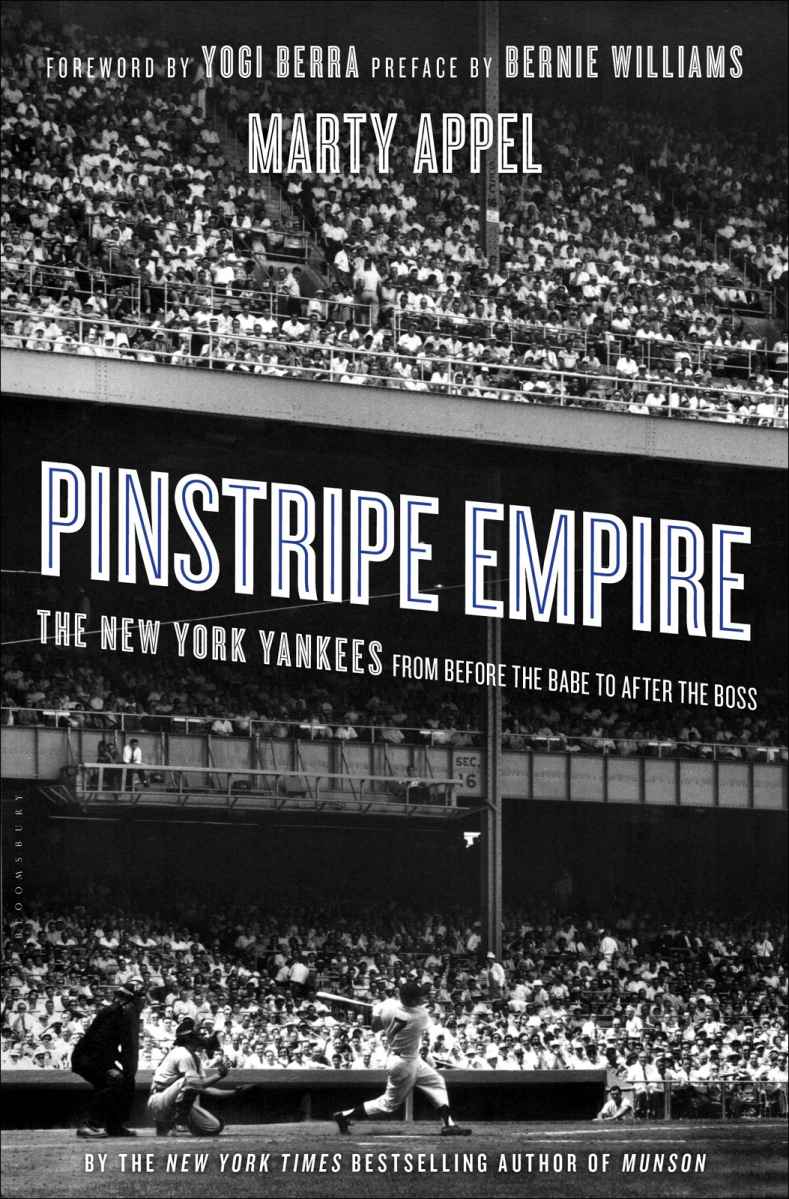 Sometimes people ask me what it was like to play with Babe Ruth—I have no idea. I met him once, even got my picture taken with him when I was a rookie in 1947, before he died. Shaking hands with him was like touching history.

I learned once you’re a Yankee, you’re always in touch with that history. You sense it all around you, the pinstripes, the stadium, the tradition. On all the teams I played on, with DiMag, Whitey, Mickey, all of us felt responsible to our team. Being a Yankee meant something and still does.

To this day I owe an awful lot to Bill Dickey, who made me into the catcher I became. Bill came up in 1928, and then came out of retirement to learn me all his experience, as I used to say. Bill was a great man and a coach on many of our championship teams. Being around him and some of the guys on the legendary ’27 team at our Old-Timers’ Days was special. We’d lend them our gloves or shoes for the game, it was like a big family reunion.

What I like most about the Yankees is that connection, like we’re all related. I’m proud a guy like Posada came along to continue our connection at catcher—Dickey, me, Ellie Howard, Munson. Not many teams have that kind of tradition. I’m glad Jorgie appreciated the connection, he got it.

Even nowadays, at spring training or in the new stadium, the current guys like seeing the old guys like me. They know they’re part of a big family. Guys like Jeter, Posada, and Rivera know it best. We have fun together every time I see them.

I’m not one to dwell in the past; I follow today’s team as close as anyone. But I always get a kick out of Old-Timers’ Day because it’s great to see everyone again. When I was a young player, we had newspapermen like John Drebinger and Frank Graham traveling with us—they also covered the Lou Gehrig teams. We heard a lot of great stories from those guys.

Talking baseball is what I still love. I was with the Mets when Marty joined the Yankees, but we caught up when I was hired as a coach in ’76—he was the PR guy. Boy, he knew his stuff. I would call him to talk about the latest gossip. He knew how to separate the truth from the rumors. That’s a good thing to know if you’re writing the history of the team.

I’ve written introductions to many books, but this will probably be the last. This book is the last word on the Yankees. It’s a great history and I’ve been lucky to witness a lot of it. Some of it pretty close up.

I was sitting by my locker before the first game of the ’99 ALCS against Boston. It was my habit to be quiet before big games, sort of get into my game frame of mind. Yogi Berra was there to throw out the first pitch, and he thought I looked nervous.

“Don’t worry about it,” he replied. “These guys have been trying to beat us for eighty years.”

He was right. He always was.

That was Yogi, a man of great baseball wisdom, who always made you feel terrific in his presence. And what he was saying was “We’ve got your back,” speaking for ninety-seven seasons of Yankee baseball and all the great players who had come before. No one carried Yankee history more than he did.

For me, there were other important personal links to the past. I once had a three-minute conversation with Joe DiMaggio, who always intimidated me a little, and he said, “Great job—keep up the good work.” It meant so much. And Mickey Mantle signed a ball for me on Old-Timers’ Day and said, “I’ve heard a lot about you, keep working hard.” Those were just passing moments to them—but so meaningful to me, as a young player trying to find my place.

I grew up in Puerto Rico rooting for Puerto Rican players more than any one team. I was ten when I watched the Yanks’ Ed Figueroa become the first Puerto Rican to win 20 games. What a big moment that was for us. And I came of age as a fan in 1977 and 1978 when the Yankees were on top. I found myself drawn to them. I ate Reggie bars. I watched Bucky Dent in the Macy’s Thanksgiving Parade and thought that was very cool.

When I first got to the Yankees in 1991, the team was down, but the organization was first-class, even in the minors. It was my first brush with feeling like a rock star. The facilities, the travel, the things that were required of us—no beards, dress right, wear a tie—it all made us stand out against other organizations.

I was part of the generation of homegrown players who began to make their marks with the Yankees, a shift in the mentality of the way the team was built. Hensley Meulens, Kevin Maas, Oscar Azocar, Pat Kelly, Andy Stankiewicz, Jim Leyritz: They came just ahead of me, with Jete, Mo, Andy, and Jorge on the way. It was a transitional time and I was just proud to put on the Yankee uniform. We may have been down, but we had a following wherever we went. Good days were coming; you could feel it.

Yankee Stadium was magical. Maybe it was just my overwhelming excitement, but while the area around it seemed gray and gloomy, you’d walk into the ballpark and even the sky seemed bluer. It was like I had changed to new glasses. I walked out to the monuments, to the retired numbers, and took it all in. I was going to learn who all these old players were.

You learn about Yankee history because it’s all around you. I first wondered why the team would spend so much time marketing the past when you had this emerging team coming along. But I came to realize it’s what connected generations of fans and how important that shared experience was. The PR department would get us to record trivia questions for the scoreboard, or we’d watch the historic moments on the board during the game, taking it all in. (You think we don’t watch?)

That I could be with the Yankees during a championship era in their great history means the world to me. I’m proud to have been a player for this very special franchise, and proud to be part of the telling of its story.

I was born predisposed to become a Yankee fan, as other tots are born into their religion. My father was a sportswriter for the old
New York Sun
, covering first the Giants and later the Yankees. I spent my earliest years in a Brooklyn apartment, hearing not great symphonies or birdsong but illustrious names from the sports world. The most prominent was that of a person I understood to be called Bay Bruth.

In 1933 my father took the whole family to St. Petersburg, Florida, where the team had its spring training camp. I saw the great players close up. One day my father and I joined the players on a ferry shuttling them across Tampa Bay for an exhibition game. Tony Lazzeri, Earle Combs, Lefty Gomez, and others who had been simply names to me until then patted this eight-year-old on the head. As we waited on a dock for the return ferry, I wandered over to where the Babe and Lou Gehrig had dropped a fishing line into the water. I stood close to them as they pulled up a blowfish and shared their wonder as the little creature, hitting the air, swelled like a toy balloon.

For the next decade I exulted or grieved with the Yankees’ fortunes, following their results faithfully in the newspapers. Better still, I read the daily column in the
Sun
bylined “by Frank Graham,” which often recounted the conversations in the clubhouse and dugout my father had overheard and transcribed with such skill. I tagged along with him sometimes to Yankee Stadium, where the two of us always visited manager Joe McCarthy in his office before the game, and later I would sit in the dugout beside some of my heroes. I posed for a picture with Gehrig, wearing the great man’s cap. Lazzeri offered me a batboy’s uniform so I could go to the outfield and shag flies during batting practice. But I stubbornly declined his offer, envisioning myself skulled by a high fly ball and carted, ignominiously, off the field.

Raze & Reap by Tillie Cole
Femme Fatale by Cynthia Eden
Hellsbane Hereafter by Paige Cuccaro
The Body in the Clouds by Ashley Hay
What Stays in Vegas by Labonte, Beth
Lamp Riders: A Jinn Motorcycle Gang Novella by Augusta Hill
Breaking the Rules by Lewis, Jennifer
Until I Found You by Bylin, Victoria
White Death by Philip C. Baridon
Valentine's Theory by Shara Azod