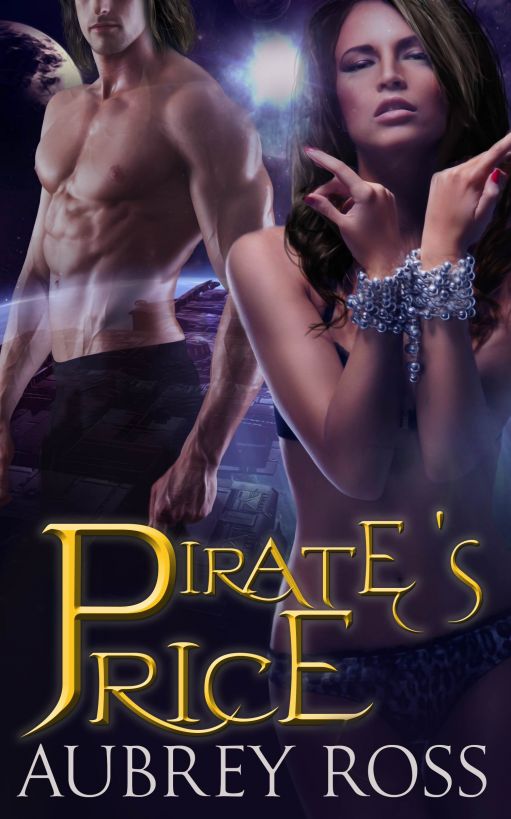 Other
Smashwords books by
Aubrey Ross

This ebook is
licensed for your personal enjoyment only. This ebook may not be
re-sold or given away to other people. If you would like to share
this book with another person, please purchase an additional copy
for each recipient. If you’re reading this book and did not
purchase it, or it was not purchased for your use only, then please
return to Smashwords.com and purchase your own copy. Thank you for
respecting the hard work of this author.

This e-book file contains sexually explicit scenes
and adult language which some may find offensive and which is not
appropriate for a young audience. Please store your files wisely,
where they cannot be accessed by under-aged readers.

Vihlok is a dashing, though
somewhat unscrupulous,
Sabrotine privateer.
He offers a variety of less than legal services for
outlandish fees. When an anonymous client asks him to kidnap a
young woman during her wedding and sully her reputation so badly
the groom will no longer want her, he’s intrigued.

A past indiscretion leaves Rana Jabulayni
little choice but to accept an unwanted marriage. Yet one night
alone with her fiancé convinces Rana anything is better than being
bartered as part of a trade agreement. Seeing no other option, Rana
arranges her own kidnapping.

If you enjoy
Pirate’s
Price,
check out
Price of Passion,
a 3-in-1 collection of space pirate stories for only
$2.99!

From Aubrey:
This book was originally
published as part of a multi-author series. I try to play well with
others, but I also feel constrained when there are too many rules.
While revising this book, I centered the story more fully on the
two main characters and I’m happier with the result. This lusty
romp is part capture fantasy, part revenge adventure, and part
sci-fi romance. The sex scenes are
hot
and there is an
instance of ménage action, though that is not the focus of this
story. Enjoy!

“Are the conditions acceptable?” King Vega
of Peronite raised his chin, challenge gleaming in his dark
eyes.

“We welcome the technological advancements
you have proposed and the bride price is more than adequate.”
Empress Bakula wisely avoided Rana’s gaze as she added, “My
daughter is honored by your generosity.”

Honored
to be sold like a brood mare
to a man twice her age?
Honored
to save her mother from
financial ruin with a lifetime of subjugation and discontent? If
Rana’s father hadn’t instilled a sense of responsibility and pride
in Rana, she would have turned her back on her manipulative mother
long ago. However, Rana knew exorbitant taxes and unfair policies
were crippling the people of Devaunt. After exhausting her other
options, Rana had agreed to participate in this negotiation in
exchange for key economic reforms. Once King Vega’s generous bride
price refilled Devaunt’s coffers, the empress could afford to be
humane again.

“Shall we move on to the second phase of the
negotiation?” King Vega asked.

Rana perched on the edge of a high-backed
chair, the only position that allowed her to breathe in the
stifling gown. The shimmering material appeared delicate and
feminine, but the fabric pressed against her torso with amazing
inflexibility. Her figure dipped dramatically at her waist and
swelled into an exaggerated décolletage. Before coming to Peronite,
she had only seen garments this impractical in history vids.

“Our sexual compatibility must be
established. I have selected my witness. Have you done the same?”
He spoke to the empress not Rana. Another annoying habit.

Let them determine if
they
were
sexually compatible. The entire ordeal was a pointless humiliation.
Vega had insisted Rana be examined by his physician before the
negotiations began. There was no physical reason she couldn’t bear
children. She had to allow Vega to fuck her; she didn’t have to
enjoy it.

Empress Bakula finally met her daughter’s
gaze. “Who did you select?”

“I was led to believe the choice was mine.”
The Peronite found eye contact combative, so she lowered her gaze
to her hands before adding, “I would be more comfortable if this
were a private exchange between my betrothed and myself.”

A chair scraped over floorboards and a blur
of purple warned her that Vega was in motion. “This is a political
union, my dear. The treaty will benefit both our worlds.” He moved
in front of her and pressed one of her hands between his. The gaudy
sparkle of multiple rings threatened to hypnotize her. “My first
marriage was a love match, yet she was unable to give me sons.
Perhaps we will be better suited for procreation. Our compatibility
must be witnessed, but the details are up to us. If you fancy a
servant as your witness, I have no objection.”

An odd undercurrent hinted at hidden
meanings. Did he often
fancy
servants? “I appreciate your
understanding.”

“Intta, have Kashi brought to the gold
salon.” He motioned for everyone to rise. “If all goes as I expect,
we will set a date for the wedding in the morning.”

The lump that had clogged Rana’s throat all
morning dropped into the pit of her stomach. Her enjoyment of
sexual pleasures had led her to this situation, now her ability to
respond to a man she disliked would be the final hurdle. She
couldn’t help but appreciate the irony.

Vega took her hand and tucked it into the
bend of his elbow. “I was hoping for a few moments alone with
you.”

“You had only to ask. My people have far
fewer traditions than yours.” She hadn’t realized how rude the
statements would sound until she heard her own words and felt his
arm flex beneath her fingers. “I’m sorry. I meant no insult. I also
wish we’d had the opportunity to become better acquainted.”

She knew so little about him. His wife had
died the previous winter after a long debilitating illness. His
kingdom had a thriving economy and he was desperate for an heir.
Beyond that, Vega was a mystery. And Peronite custom prevented her
from indulging her curiosity. Females were supposed to be meek and
subservient, respectful and… obedient. She glanced off into the
distance as a smile bowed her lips. He was in for a rude awakening
once the marriage was finalized.

“You’re obviously used to speaking your
mind. I have no objection to outspoken females, as long as they are
respectful in mixed company.”

They strolled along the main corridor in
strained silence. Her heels clicked against the marble floor and
echoed off the vaulted ceiling. Rana had been impressed and
distressed by the opulence of Vega’s palace. She had always thought
House Jabulayni extravagant until she saw this sprawling estate. At
least Vega wasn’t starving his people to support his decadent
tastes.

He guided her down an adjacent hallway then
pushed open double doors, exposing the gold salon. Warm sunlight
bathed the room, accenting the gilt and ivory décor. Though every
bit as ornate as the other rooms, the salon had a certain elegance
that appealed to Rana.

“Our witnesses will join us shortly.” Vega
left one of the doors ajar. “We shouldn’t squander this time.”

“I didn’t mean to be rude earlier.”

“And I’m not as offended as you’ve
presumed.” He cupped her chin and tilted her head until their gazes
met. “You’ve hardly spoken two words since you arrived. The flash
of spirit caught me off guard.”

“This treaty is extremely important to my
people. I wasn’t willing to do anything to compromise the
outcome.”

He smiled and released her chin. “I have no
doubt that’s true, but I fear it’s not the reason you’ve concealed
your feistiness.”

Not willing to risk further insult, she
waited for him to explain the comment.

“I’m not a fool, Rana. Your mother is
manipulating you into this match. If you are not as spineless as I
first thought, then she has something on you. There were whispers
of a scandal, but I was unable to learn the details.” He clasped
his hands behind his back and began a slow, interrogative orbit.
“My physician told me you’ve never borne a child, so that can’t
have been the nature of the scandal. Why did your mother object to
your lover?”

“Why do you presume the scandal had to do
with sex?”

“It’s apparent in the way you move and the
sparkle in your eyes. You are a very passionate female.”

“We told you from the onset that I wasn’t a
virgin.”

His beady gaze moved over her face, then
swept the length of her body. “Was your lover a woman?”

“No.” She sighed. It was probably better to
tell him what happened than have him stirring up all the old
rumors. “My mother caught me in bed with my bodyguard and his
lover. I was only intimate with my bodyguard, but Mother didn’t see
it that way.”

“Were you only intimate with your bodyguard
once?”

She licked her lips and admitted, “We’d been
lovers for several solar cycles.”

“Was your bodyguard’s lover also male?”

“Obviously your bodyguard is bisexual.” She
merely nodded. “Did you realize he had a lover when you began the
affair?”

“It was consensual on all sides. I would not
have encouraged the attraction if it weren’t.”

This wasn’t the reaction she’d expected from
this straight-laced man. Her mother had been scandalized. She’d
insisted no one would believe Rana participated willingly in
something so brazen and threatened to have both men prosecuted.
Rana knew the media frenzy would force both men into exile even if
she testified on their behalf. Her mother’s real motivation had
been control, but Rana seized the opportunity and forced some much
needed reforms.

“Would you like your lover brought to you
here on Peronite?”

Her startled gaze snapped back to his. Why
would he make such an offer? “He was compensated for his discretion
and allowed to relocate.”

“How far had the act progressed when your
mother interrupted?”

She didn’t want to sully the memory of what
she’d shared with Jaque. He’d been kind and tender and she missed
him terribly. “I don’t see how the details are relevant to our
relationship. I was candid because I hoped we could build our
future on mutual respect.”

His smile warmed and he slipped off his
jacket. “The details are more relevant than you realize. I had only
intended to offer clues and insinuations until after the wedding,
but it appears we are better suited than I’d imagined.”

A light tapping drew Rana’s attention to the
doorway. Kashi stepped into the room followed by a dark-haired man.
Rana had seen the man several times since her arrival. He’d been in
the council chambers, but he wasn’t on the council. She’d
immediately noticed his striking features and athletic build, yet
the overt hostility in his stare left her cold.

“Is Kashi your handmaiden?” the king
asked.