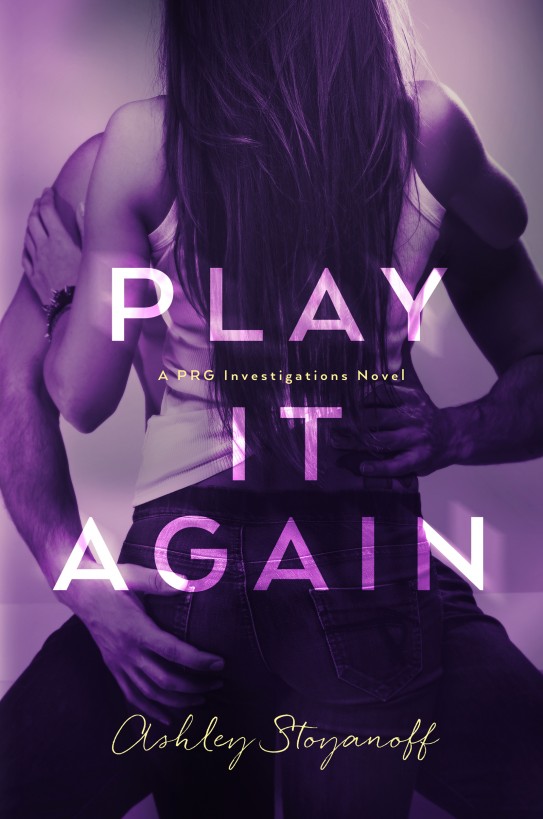 Book 2 in the PRG Investigations Series

ALL RIGHTS RESERVED. This book contains material
protected under International and Federal Copyright Laws and
Treaties. Any unauthorized reprint or use of this material is
prohibited. No part of this book may be reproduced or transmitted
in any form or by any means, electronic or mechanical, including
photocopying, recording, or by any information storage and
retrieval system without express written permission from the
author/publisher.

This is a work of fiction. Names, characters, places,
and incidents are the products of the author's imagination or are
used fictitiously. Any resemblance to actual events, locales, or
persons, living or dead, is entirely coincidental.

Two Truths and a Lie

Thank you for being you. Your friendship is
invaluable.

Crap, there are three of them.

My stomach clenches and jumps. Seeing Vance
again is nerve-racking enough, but all three of them … together
…

They arrived only moments ago, parking their
vehicles and getting out. They haven’t made a move to approach the
door yet, seemingly content to just stand there, scoping out my
house. It looks as though they are talking, but the movement of
their lips is so subtle that I have to squint to see it.

Swallowing thickly, I work hard to push down
my jittery nerves. I should have seen this coming. Kim warned me
that her cousin never works without his partners, and come to think
of it, it was a rare occasion to see Vance without one or both of
them, but somehow, I hadn’t expected them all to show up at my
house for the initial consultation.

I knew I should have gone to the grocery
store. I considered it. I was going to bake cookies, and maybe some
of those Pillsbury pastries.

But then, I thought about my clients and
deadlines, and the reality of how far behind I am hit me. Taking
time for shopping and baking ... Not really in the schedule.

And besides, Vance isn’t a sweets kind of
guy.

We met when Kim and I were roomies in
college. He came to our apartment to install a security system the
day we moved in. Then he came back to fix the bathtub faucet when
it jammed and the hot water wouldn’t turn off. Then there was the
time that Kim’s car wouldn’t start and he came over to fix that,
and then again, when my key got stuck and broke off in the deadbolt
and we couldn’t get in.

He started to come around—a lot—after the
deadbolt incident, fixing things that didn’t need to be fixed, and
visiting with Kim. I used to see him once a week, sometimes more,
and each time he came over, he stuck around for food and he always
skipped dessert.

So instead of shopping and baking, knowing
that the effort would be wasted on Vance, I went to the kitchen,
found crackers, cheese, and some summer sausage. Not much, but
enough.

Well, it would be enough as long as I took
the time to arrange it to make it look like it was enough and I
didn’t nibble on it at all.

So that’s exactly what I did. I took the time
to cut the cheese and sausage, arranging it on a plate, and then I
went back to my work, thinking that it would do.

Except that was when I thought only one
person was coming.

Prying the blinds open further, I scan the
guys over. They’re all tall, well-built, and hot to boot, but it’s
Vance that really catches my attention.

He always catches my attention.

He isn’t smiling like Jase and Wes, and he
seems to be doing most of the talking. His eyes are hidden from my
sight, beneath the brim of his baseball cap, but the hard set of
his jaw gives me the sense that he’s not impressed.

My eyes skim further down his body, taking in
his broad shoulders and muscular arms. I can just make out the
edges of a tattoo curling along his right bicep, peeking out from
the edge of his dark tee. His hips are slim, his waist, narrow.

The man looks incredibly solid from head to
toe.

He says something to the others, and they
turn away from him, walking over to his truck. The tailgate is
dropped, and they begin to unload boxes, stacking them in my
driveway.

But Vance, he doesn’t move.

His gaze sweeps the house, pausing on the
living room windows, scanning them critically. Nervous energy
twists a knot in my stomach. I don’t have a clue what he’s looking
for, but the intensity of his inspection has me feeling uneasy.

After a moment, his head swivels, scanning
over the left side of my house, and I get a clear view of his face.
Strong cheekbones, firm jaw covered in a few days’ worth of
stubble, full lips, and dark eyes.

It doesn’t occur to me that I’m watching him
from one of the windows, until his gaze hits mine. His eyes narrow
and he regards me for a moment, before a slow, cocky smile forms on
his lips, melting away his hard features, giving his face a boyish
quality. He lifts his chin, and then winks at me, before turning
away, and moving over to the truck.

Panicked at being caught checking him out, I
drop the blinds quickly, letting them fall back in place. I step
back from the window, slinking further into my office, my heart
thumping hard in my chest.

“My God,” I whisper. He’s still the hottest
man I’ve ever seen. There’s just something about him, something
about all that broody swagger he has that makes me lose myself
every single time I see him.

What have I gotten myself into here? I should
have made Kim come for this meeting.

No. Scratch that. I shouldn’t have even let
her schedule it in the first place.

For a fraction of a second, I consider
sitting back down at my computer, and maybe pretend that I didn’t
see them. If I ignore them, perhaps they’ll just go away.

Ugh, get it together, Pipes.

It’s just Vance and Jase and Wes. No big
deal.

Right, okay. No big deal. I can do this.

I grab my phone, stuffing it into my back
pocket, and head out of my office before I have a chance to change
my mind.

I take a deep breath as I open the door,
trying to calm my nerves. As I step out, closing the door behind
me, Vance turns, catching my eye. He regards me peculiarly, as I
start toward him.

Trying to ignore the way my heart is racing
in my chest, each beat pounding through my body painfully fast, I
force a bright smile and lift my hand, offering a little wave.
“Hey, Vance.”

Oh God, did I just wave? I swallow down a
groan as a hot flush spreads through my cheeks. Crap, I did, didn’t
I?

Way to play it cool, Pipes.

The corners of his lips twitch, revealing a
slight smile, and he chuckles.

My God that sound … it’s hard and rough and
beautiful.

My heart smiles, and my stomach flutters for
a moment, but I quickly push it away. I’m really not the stomach
fluttering type, or at least I try not to be.

I glance at my watch, my brow drawing in,
confused. Our meeting was scheduled for one, and it’s only a few
minutes past. Not what I’d call late.

Shaking my head, I meet his eyes once more as
he stops in front of me, letting out a nervous laugh. “Not a
problem,” I say. “You’re not late at all.”

He says nothing, regarding me for a moment,
his eyes tracing my face intently. I can’t tell what he’s thinking,
though that’s not really a surprise. I could never get a read on
him before either.

Swallowing thickly, I force my eyes away from
him and glance at the growing pile of boxes, waving a hand toward
it. “What’s all that?”

He eyes me curiously for a moment, smirking.
“It’s your new security system.”

My brow furrows in confusion, and I turn back
to him, catching his eye. “Pardon?”

“It’s your new security system,” he repeats,
a flash of amusement passing across his face. “Picked it up this
morning.”

I blink, certain I’m looking at him as though
he’s insane. “You, uh, already bought a security system? Without
even knowing what I’m looking for?”

“What else was I supposed to do?” he asks,
arching an eyebrow in question. “Let you go without so you can
consider your options while you’ve got a goddamn stalker
lurking?”

“I picked it up,” he continues, ignoring my
response, “because I couldn’t in good conscience leave you here
without it.”

I stare at him incredulously, not sure what
to say. I don’t know if I should be annoyed that he took such a
liberty, or touched that he wants to make sure I’m safe.

I’m still contemplating how to respond when I
hear footsteps, and I glance over to see Jase and Wes sauntering
toward us, arms loaded with boxes.

“Yo,” Wes says, lifting his chin. “You mind
if we take this stuff inside?”

Feeling slightly uneasy, I glance at the
boxes, noting that there are still quite a few sitting in the
driveway. “Um, I’m not sure I need all of that.”

“Right,” I mutter, rolling my eyes and giving
him a look. “Of course it is.”

Vance chuckles at my look, amusement touching
his eyes, as he gives me a look of his own, cocking a brow, almost
daring me to argue with him.

Flustered, I scramble backward to the door
and push it open. I nearly trip over my own feet, but catch myself
before I tumble, offering them a frazzled smile. “Come on in.”

Vance steps inside, Jase and Wes following
him. I close the door behind them as I watch them scope out my
place, their eyes scanning everything, cataloging, assessing. My
first instinct is to ask them what they’re looking for, but I hold
the question back, instead asking, “Um … Can I get you something to
drink? I have beer, rye, coolers, or I can make some ...”

I’m about to ramble off that it will only
take a couple minutes to make some coffee when Vance says, “A glass
of water would be great.”

Nodding, I walk quickly toward the kitchen.
I’m overly aware of them moving around my house, checking locks,
bringing in more boxes, as I retrieve three glasses from the
cupboard and fill them with water from the Brita. Once filled, I
wedge a tumbler in between my right arm and torso, grabbing the
second and third with my hands. I don’t bother grabbing the cheese,
sausage and crackers, because I know it’s not going to cut it.
There’s barely enough for two, let alone four.

They are talking in low voices when I come
out of the kitchen, standing in the living room. Juggling the
drinks, I maneuver around the boxes stacked through the room,
careful not to spill, and hand them out.