Read Playing for Keeps/Body Check (Rules of the Game) Online

Playing for Keeps/Body Check (Rules of the Game) 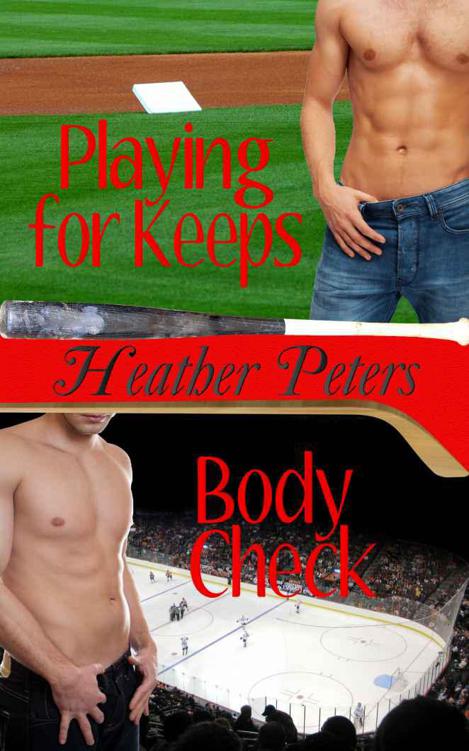 This is a work of fiction. Names, characters, and incidents are products of the author's imagination or are used fictitiously and are not to be construed as real. Any resemblance to actual events or persons, living or dead, is entirely coincidental.

All rights reserved. No part of this book may be used or reproduced in any manner whatsoever without written permission, except in the case of quotations embodied in articles or reviews.

I lovingly dedicate Body Check to my children and grandchildren, who have shared my love of hockey all their lives; thanks for being the inspiration for this story.

My husband, Mike, adored baseball, so I dedicate Playing for Keeps to him. Nick Dante lives because of Mike's knowledge of
America
's greatest past time. Thanks, Honey.

Many thanks to D.C. Charles for her awesome cover art;

and to my editor, Adrienne Jones – you rock, ladies!


To Blanche Marriott, for her patience and time!  Also deep heartfelt gratitude to my critique partner extraordinaire

Eden Elgabri, who never stops encouraging me, often threatening me with a kick in the butt if I slack off.

Every moment of Nick Dante's life came down to this time and place.

Standing on the mound, eyeing his opponent at home plate, sweat sliding down his back and face, Nick lifted his cap, and swiped an arm across his skin. He took his time, focusing as if hypnotized on the opposing batter taking his stance ninety feet away.

To the forty thousand plus fans cheering wildly in
San Francisco
's CalCon Stadium, Nick appeared to be cool, calm and disciplined. Yet only he knew the opposite to be true.

A long standing rotator cuff shoulder injury, a common malady to major league pitchers, was the reason for his inner turmoil.

He stepped off the mound, picked up the rosin bag to dry his palm, then re-claimed the pitching mound. Taking a deep breath to tamp down his nausea, Nick palmed the ball while he eyed the hand signals his catcher directed toward him.

His shoulder was going to cry on this pitch, but all Nick wanted was to win this game and the Series. It had been a long season of ups and downs. He'd won twenty games for the fourth straight season. The win today would just be icing on the proverbial cake.

His opponents, the New York Knights, were favored to win the series that had gone to seven games. Nick loved being the underdog in his sport and always credited himself with being a competitor.

Shaking off the catcher's sign as the pain in his shoulder grew worse with every breath he took, Nick ignored the queasiness in his stomach. He nodded at his pitcher's sign; fast ball, ok, better. He could do that.

As if in slow motion, Dante wrapped his long fingers around the baseball, feeling the leather stitching between his index and middle fingers. He began to wind up for his blazing two-seam fastball.

His six foot three frame stood straight and strong. He lifted one leg, then, cradling the ball, raised his arms, grimacing under the pain.

You can do it, just one strike and it's over.

He gripped the ball while lifting his shoulder and right leg. He followed through the motion as his right leg hit the ground, then watched in agony as the ball dipped low, then squarely crossed home plate.

His catcher caught it, and all ears heard the umpire bellow, "strike three, yer out." And Nick Dante exhaled a piercing laugh.

A moment of regret grabbed Nick as a fleeting vision of a gorgeous red head who'd been the love of his life over a decade ago flashed before his eyes. She should be here, sharing this moment with him, sitting in the stands, cheering him on. But he knew that she was not.

Three thousand miles away, in a
Manhattan
television studio, Jenna Valentine was taping her guest spot on a cable cooking show for future airing.

She smiled at the camera, while completing her latest recipe.

". . .And place a basil leaf for an aromatic garnish. And there you have it, a simple, but tantalizing dish that will bring cheers from your hungry guests."

Jenna placed her palms on the counter and brought the show to a close.

"I'm Jenna Valentine. It's been a pleasure cooking for you on
Food Fever
." She held up a glass of red wine and saluted her audience. "Buono appetito."

The house lights went up, Jenna took a long sip of her wine, then relaxed.

"That's a wrap everyone. Thank you." The director pulled off his headphones and took a deep breath, then smiled.

"My grandmother's recipe. Never fails," Jenna announced, happy to share the mouth watering Italian stuffed eggplant dish she'd prepared on air with her crew. She also reminded one of the production assistants to take the leftovers of the meal to the St. Francis Mission down the block, where many of the city's homeless would be fed.

It was the least she could do, having been lucky enough to share with others less fortunate.

Making her way to a nearby stool, Jenna settled down, then toed off her ridiculously high designer heels.

She sipped on her wine, leaned back and closed her eyes, grateful that her guest spot on Food Fever was done. She'd had a chance to plug her new café in
Brooklyn
. Television would be a great way of advertising
Cafe Valentine
, which she owned with her sister, Grace. Her intimate, romantic café would have its grand opening next week. Grace managed the business part with expert skill, while Jenna shared cooking duties with their sous chef, Mario.

While thinking about which specials to list for the first night of their debut, Jenna was brought out of her musings by a couple of crew members.

Nearly choking on her wine, she nearly fell off the stool as she heard a name that rendered her breathless.

"Did you see that last inning?" one crew member exclaimed. "Dante pitches a three hitter, then strikes out the last guy to win the Series. Un-friggin-believable."

The other young man nodded in agreement. "Yeah, but see how he collapsed after he won the game?

Ah, he's all done with that bum shoulder of his. How old is Dante, anyway, thirty- five, thirty- six?"

The two crew members turned to her with eyebrows raised. "Hey Ms. Valentine, you a baseball fan?"

Jenna felt her cheeks blush. "In a manner of speaking."

The other man nodded. "Oh, then you must be a Nick Dante fan."

Jenna needed to end this conversation, but didn’t want to be rude. "I knew him in college." She sighed and hoped she appeared disinterested.

Yeah, there's an understatement. You've known him longer than that. And have loved him all your life.

"You dated Nick Dante?" one of the guys asked wide-eyed, interest obvious now.

Jenna nodded weakly. Wouldn’t these two young men be interested to know that not only did she go to college with Nick, but that she also knew his family, the way he kissed, that his hair was thick and felt like silk when you drew your fingers through it.

Jenna knew his eyes were the color of espresso, and grew darker when he was aroused.

He was six foot three inches, had a small scar on his chin from being hit with a baseball when he was in college.

His voice lowered when aroused, and she used to call him Nico.

And the way he made love as though his life depended on it.

It was all a long time ago. But she could still taste his bone melting kisses, his strong arms wrapped around her.

Shaking herself out of her reverie, Jenna slid from the stool, and hurriedly gathered papers and her bag together. She had to get out of here. After twelve years, the mention of his name still possessed the power to screw up her mind, and affect her body.

Yeah, she knew a lot about Nick Dante.

After all, he was her ex-husband.

Back in California, the Condor's locker room was in a state of happy chaos. Champagne was sprayed by players, newly printed T-shirts and caps with tags still adorning them were worn by the members of Nick's winning team.

Nick was among his joyous teammates, the burning throb in his shoulder forgotten for a time. This is what he'd worked his entire life for; what he'd given up everything for: a World Series ring.

As champagne splashed his face and burned his eyes, Nick relished the victory. He loved these guys, and couldn’t wait to ride that championship float the following morning through the streets of San Francisco.

Wincing slightly as each player slapped him on the arm or shoulder, Nick took deep breaths to manage the pain. He and the team gathered in the center of the locker room, as the commissioner of baseball entered the room carrying the huge, beautiful championship trophy, signifying that the Condors were the best in the world.

Players threw their arms around him, and Nick mentally fought off the nausea when his shoulder was jolted. When he was chosen as Most Valuable Player of the play-offs, he accepted the trophy with humility.

Much later, after TV cameras and reporters exited the locker room, members of the team and staff bid Nick goodbye. His shoulder needed medical attention and fast, so the team doctor escorted Nick into a nearby ambulance, and together they made their way to the local hospital.

After enduring an MRI, shoulder ex-rays and an annoying CT scan, Nick sat up in the hospital bed, staring into the frowning face of the team's physician. He could read the look on the team's orthopedic doctor, Bernie Ramin. "So what's the verdict, Doc?"