Read Playing for the Other Team Online

Playing for the Other Team 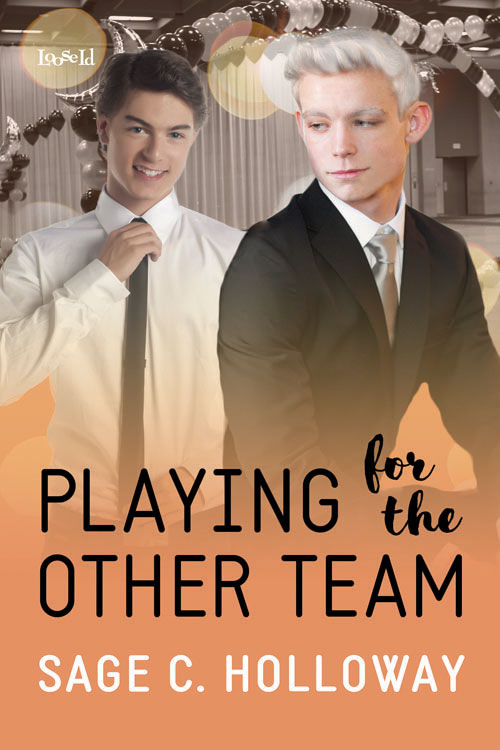 PLAYING FOR THE OTHER TEAM

Playing for the Other Team

Amber A. and Raven M. for general awesomeness.

My mom for pretty much the same.

The Loss Of Blissful Ignorance

Jasper and Rayna were dancing together, and I wanted nothing more than to sprint onto the dance floor, wedge myself in between their bodies, and claim Jasper for my own.

Which was obviously, hands-down, the worst idea ever.

Clenching my clammy hands into fists, I tried to get it together. I had spent the last half of senior year constantly telling myself how much I totally did not care about Jasper Reyes, and I wasn’t planning on stopping now. But the strength of the jealousy rearing its ugly head within me had me a little worried.

I had no reason for it. None at all. It wasn’t like I wanted to take Rayna’s place in his arms or anything. Not me. Not like I wanted to be the one inhaling his scent, looking into those deep blue-green eyes, swaying to the rhythm of the music with my left hand on his waist while the fingers of my right burrowed into that silky chocolate-brown hair.

Oh, who the hell was I kidding?

My stupid brain didn’t seem to care that I had survived an entire semester of sharing a table with Jasper in art class, stubbornly fighting whatever it was that drew me to him. This was not the time to cave. Not when the school year was almost over, when graduation was just around the corner, when I’d be off to college soon. Good-bye bizarre feelings I really didn’t want to have to deal with. Good riddance too.

Couples moved across the dance floor and blocked my view of Jasper and Rayna, which was convenient because I wasn’t sure I could have managed on my own to tear my eyes from him anytime soon. Taking a deep breath, I used the opportunity to turn away.

An arm looped around my neck. I hadn’t seen it coming, so I wasn’t prepared to be pulled to one side, and stumbled hard. Somebody yelped as my body—and the one I was reflexively holding on to—crashed into a table. There was a sudden, blinding pain in my side.

A helpful bystander made an admirable attempt at keeping me upright. It almost worked. I was dizzy, though, and the room mostly dark, and eventually I gave up trying to keep my balance and slumped heavily onto the floor.

“What the hell, Bry? Are you drunk already?”

I looked up and into the grinning face of Trip, my friend and fellow baseball player. He was leaning over me and studying me closely. Backlit, his dark blond curls looked like some kind of halo, which was about as close as Trip would ever get to being angelic. I glowered up at him. People around us were staring, which made me thoroughly uncomfortable.

“Shut up.” He flattened his hair with his hands, self-consciously. “Elle likes it that way,” he defended himself.

“Yeah, I know.” I reached for his hand, and with a combined effort, we managed to get me standing again. “That’s why I have to try to keep your head from exploding.”

“Oh, dude, speaking of head, I’ve got something lined up for you.”

“You what?” A feeling of impending doom spread through me. This didn’t sound good.

“Nova Phillips. She’s into you. And according to my sources, really good with her mouth.”

His sources? Since when did Trip have sources?

“It’s prom night. Sucking and fucking is basically a longstanding tradition, and I am not letting you bitch out.”

“You haven’t had a girlfriend in a
year
, Bry. That’s pathetic. You’ve lost your touch.”

My cheeks heated a little, and I wasn’t even sure why. Not having a girl on my arm every second of the day wasn’t exactly the apocalypse.

“Yeah, yeah, Mr. Academic. That’s over now. I can feel it, bro…tonight you’re getting laid.”

Trip narrowed his eyes at me in a manner I didn’t like at all. “What’s the problem with getting laid, all of a sudden?”

I really didn’t want him pissed at me for any reason—not on prom night, of all nights—so I thought fast.

“Because, present company excluded, your taste in girls is pretty horrifying.” Elle, Trip’s blonde, petite, and very pretty long-term girlfriend, who had been waiting patiently nearby, giggled at that, but Trip’s expression hadn’t changed. “I mean, do you remember Halloween two years ago? That girl you kept wanting me to hook up with?”

“Which girl?” As expected, he took the bait, frowning in thought. “Oh, shit. That broad in the ridiculous Christmas-tree outfit?”

“Not if you like a bunch of tinsel stuck in your zipper, half a pine tree inside your shirt, and puke all over your clothes while trying to figure out what to do with the chick who just passed out in your lap.” It really hadn’t been my favorite experience, and I didn’t have the slightest problem using it to distract Trip. Watching his mouth form a silent
oh
, I gave him a meaningful look. “I rest my case.”

“Okay, okay, whatever.” He took two steps over to the table next to the one we’d crashed into earlier, and grabbed two cups of alcohol-free punch. Pressing one into Elle’s hand, he sipped from the other and then nodded at me.

“Why are you over here anyway? You don’t really want to dance, do you?” He ignored Elle’s pleading look.

I didn’t say anything in response. Trip promptly interpreted my silence to mean whatever he wanted it to mean. He was handy that way.

“Exactly!” He tugged on my arm, trying to lead me farther away from the swaying crowd. “In a few days, you’ll never have to see any of these fucktards again.”

It was like I had fallen onto the table edge all over again. A flash of sharp pain, a sickening lurch in my guts.

Damn it, I hadn’t wanted to think about this. There was no reason for me to care. Nobody on that dance floor mattered to me.

I followed Trip and Elle on autopilot, taking the cup of punch he pressed into my hand. When we had almost reached the exit, I turned once more, telling myself I wasn’t looking for one particular person at all. I was just…glancing, taking in the crowd. Yup. Very interesting crowd, that. Very dancey and all.

I might have gotten away with it if not for the fact that Rayna’s showy, sparkling red dress stood out amid a sea of black and white and pastels. I caught a glimpse of it, and my eyes went that way automatically. She was laughing. Jasper was laughing too, which was something I’d never seen in an entire semester of sitting in class with him. It was impossible to see details in this light, of course, but I was certain his captivating ocean-colored eyes were bright and sparkling just now. His head turned farther in my direction, and I actually tried to look into his eyes, in the near darkness and halfway across the room.

“Bryson!” Trip called, and I caught myself.

Ocean-colored eyes? Bright and sparkling?
What the fuck was I even thinking?

“What?” My head whipped around his way.

“Which chick’s got you staring? Must be hot as all hell.”

“Forget it,” I muttered, giving him a halfhearted shrug. God, I just had to make it through this night so I could go to bed and tune all this stuff out, collect myself. To my relief, Trip didn’t dwell on the topic.

“We’re going to the pool. Coming?”

Trip gave me another look. He was doing that in spades tonight, which meant that either he was on edge about something, or I was acting like more of an idiot than usual.

“You didn’t drop it off by the pool when you first got here?” he asked, his tone quite clearly implying he thought I was dense.

I watched them leave before turning toward a heavy fire door leading to one of the stairwells. One foot already halfway down the first step, I stopped and changed my mind about finding an out-of-the-way bathroom in which to quietly freak out. I desperately wanted a few minutes to just breathe, and in the empty stairwell, for some odd reason, I found that I was in the right place to do it.

My high school, Tannenbrook, wasn’t exactly tiny, and the junior-senior prom was a tradition that had caused a large amount of fights and disagreements in recent history. Even though our class sizes—growing at record speed—had reached the point where hosting the prom at the high school’s largest gym was no longer feasible, the alumni board had done their best to shut down the idea of splitting the event into a senior prom and a junior dance, their misguided interference brought about by reminiscences of their own long-gone teen years. They weren’t the ones who would have to try and dance in a room so full of people you couldn’t find the floor if your life depended on it.

The attempt had been made once, three years earlier, and ended in disaster. After that, parents and administrators had finally set aside their bickering long enough to put their heads together and work out a solution. That was why I now found myself in the local community-slash-fitness-center the city had spent way too much money on less than a decade ago, instead of a dark, crummy gym. It was an unconventional interpretation of a dance, to be sure, but most of my class—including me—didn’t give a damn about convention anyway.

A Geography of Blood by Candace Savage
The Psychological Solution by A. Hyatt Verrill
Sacrificing Sloan (Sloan Series Book 3) by Martin, Kelly
Sweetgirl by Travis Mulhauser
Forever Altered by D.J. Pierson
Sufficiently Advanced Technology (Inverse Shadows) by Nuttall, Christopher
The Eagle Has Landed by Jack Higgins
Maid of Dishonor by Heidi Rice
The Stillness of the Sky by Starla Huchton
Moment of Truth by Scottoline, Lisa