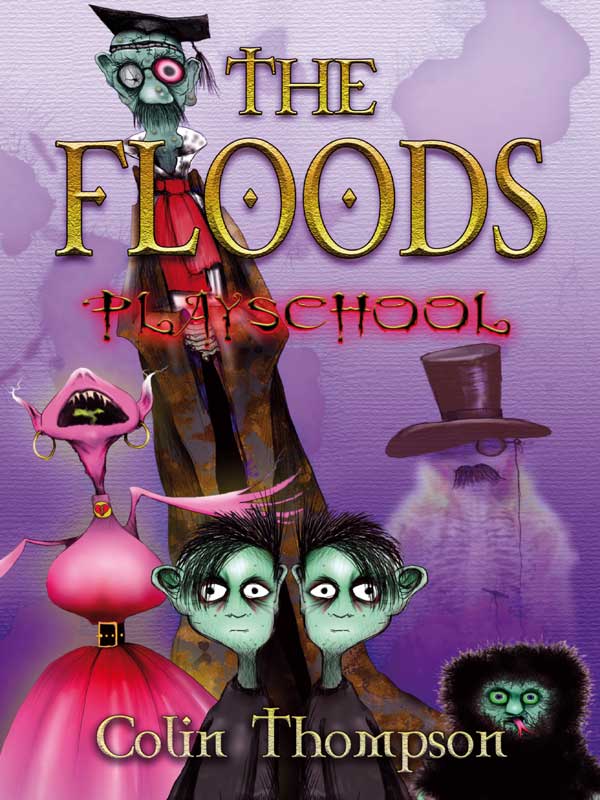 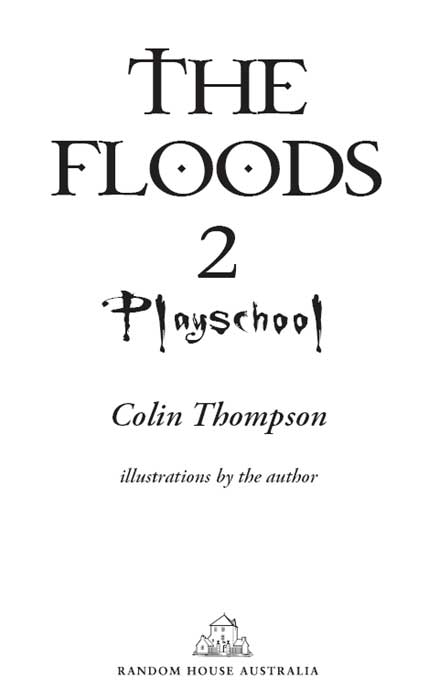 This work is fictitious. Any resemblance to anyone living or dead is purely coincidental.

All rights reserved. No part of this publication may be reproduced, stored in a retrieval system, or transmitted in any form or by any means, electronic, mechanical, photocopying, recording or otherwise, without the prior written permission of the publisher.

How To Live Forever 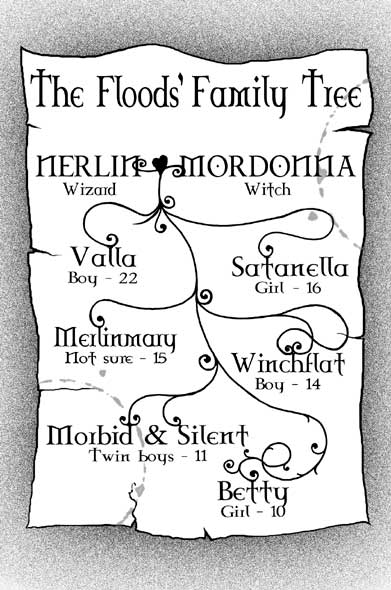 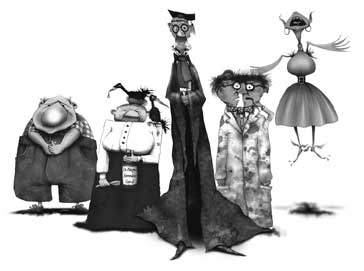 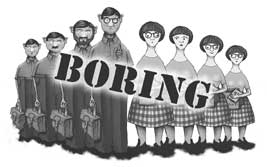 Look in ANY classroom. 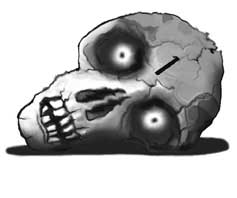 Most children start school when they're about five or six, even witch and wizard children. In fact, six of the seven Flood children started school at about the same age as you did. A particularly brilliant witch or wizard, however, may well start school before they are born.

Winchflat Flood, who is cleverer than a whole box of knives, began school eight months before he was born, when he was just a little tadpole. To help himself add things up more quickly, he grew an extra finger on each hand and three more toes on each foot, which is why he wears such big shoes. By the time he was born, he knew more stuff than almost anyone else in the whole world.

The children's father, Nerlin Flood, though quite clever, never went to school at all. Where Nerlin grew up in Transylvania Waters â a dark and mysterious country four weeks' ride by horseback beyond the furthest boundaries of Transylvania itself, turn left at the Valley of Doom and keep going until you pass through the Arches of Darkness â none of his relations had been to school. His family were Dirt People. They lived their whole lives in the drains beneath the city, cleaning the toilets from below and making sure everything always flowed away smoothly. The rest of the population looked down on them in every way, especially on Thursdays, when they would kneel on the pavement and shout rude words down the gratings into the drains just to make sure the Dirt People never got above themselves.

âWaste of good education, teaching them to read and write,' said King Quatorze.
1
âI mean, they
don't need to read anything to use a shovel and a toilet brush.'

âExactly, Sire,' agreed his Chancellor. âAnd besides, it's too dark down there to read anything anyway.' 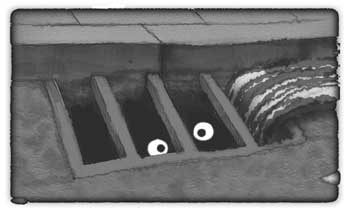 On the other hand, Nerlin's wife, Mordonna, was a princess and had received the very best education Transylvania Waters could offer. Because she was the King's daughter, she didn't go to school with the common children. She had a special governess
who lived in the palace and taught her everything she needed to know. However, because Mordonna was a princess and her governess, Claypit, was just a commoner, they were forbidden to talk to each other. This meant that, although it was always very peaceful in the schoolroom, actually learning anything was a bit difficult.

Like all clever people, Nerlin and Mordonna knew that you learn tons more useful stuff after you've left school than you do when you're there. In the years since they had eloped together and travelled the world pursued by King Quatorze's agents, Nerlin and Mordonna had gathered more knowledge and wisdom than most people ever do. Now they were brilliant at magic â and they were determined that their children would be even better. They would spare no expense when it came to their children's schooling.
2
This is why they sent their children to
Quicklime College â a special school for witches, wizards, goblins, elves, shamans and anyone else who can do magic, and the finest school of its kind in the world.

Their youngest child, Betty, is the exception. Betty goes to the normal human's school, Sunnyview Primary School, just down the road from where she lives at numbers 11 and 13 Acacia Avenue. Betty doesn't look like her brothers and sisters. She has blonde hair and no warts at all, and likes to do things that ordinary girls do, like baking cakes and knitting. Her cakes are normal cakes with no earwigs or cockroaches in them, and her knitting doesn't have the usual wizard's spiky thorns knitted into the cuffs.

Of course, being a witch, she can still do magic, though you can't tell by looking at her. And although she knows her parents would send her to Quicklime College with her brothers and sisters if she asked, Betty likes it at normal school â especially now that Dickie Dent is no longer there to pull her hair and tease her. She does get teased by some of the other girls for being a bit different, but it's nothing she can't handle with a bit of magic â âpain and pimples', as she likes to call it.

Valla, the oldest Flood child, left Quicklime's with a first-class degree in blood and now goes
out to work at the blood-bank. This leaves the five remaining children: Satanella, Merlinmary, Winchflat, and the twins, Morbid and Silent. They all go to Quicklime's.

Quicklime's is hidden in a remote valley high in the mountains of distant Patagonia. It's so far from anywhere that almost no ordinary humans have ever been there or even know the valley exists. There are no roads or footpaths into the place and, as there are always security clouds spread evenly above it, it can't even be seen by satellite. It has never appeared on any maps at all. 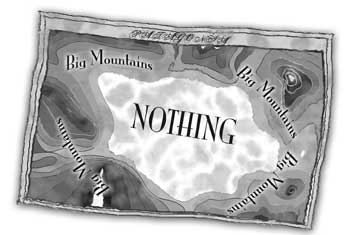 The site was chosen because it was here that the first wizards arrived on Earth. It's a well-known fact that the original witches and wizards came from a far-off galaxy where spells and magic were something everyone could do. When they got bored, they'd get in a spaceship and fly off to another galaxy to scare and/or enchant the local population, who thought magic was magic.

Nerlin's ancestor,
3
Merlin Flood the Fifteenth, came to Earth to create a few legends for humans who, until then, had lived in caves and thought the best thing anyone could do was hit someone else on the head with a lump of wood â a belief that lots of humans still have. Unfortunately Merlin's spaceship had not been serviced properly before he left home and it crashed in a remote valley in Patagonia.

Merlin's first thought was,
Plank
, which was the rudest swear word he knew. His second thought
was,
This is a pretty cool valley
, and with the help of Big Magic, seven robots, a tape measure and some human peasants, he built Quicklime College.
4
This took a very long time and Quicklime's was opened for business seven hundred and fifty years ago, by which time there were quite a few witches and wizards living on Earth.

Work on Quicklime's was held up for ninety-nine years while Merlin went off to help the young King Arthur with his adventures and teach him handy household tips like how to sharpen a sword that some idiot has stuck in a rock and how to make a round table so none of his knights would feel like someone else had a more important seat than they did. What was left out of the history books was all the fights the knights had with each other because no one could tell whose seat they were sitting in. Someone would sit in the wrong place and eat someone else's dessert and
then the fight would start. The actual table still exists and is one of Quicklime College's most treasured possessions.

Quicklime's looks like a proper wizard school should look, with lots of very pointy towers and fancy gargles around the tops of the walls. Gargles are like gargoyles except they make a loud gargling noise all the time. The three hundred and sixty-five gargles at Quicklime's have been tuned to gargle in a slow eerie wail that can be heard from hundreds of miles away, which has led to the myth that there are giants in Patagonia, something humans believe to this day. 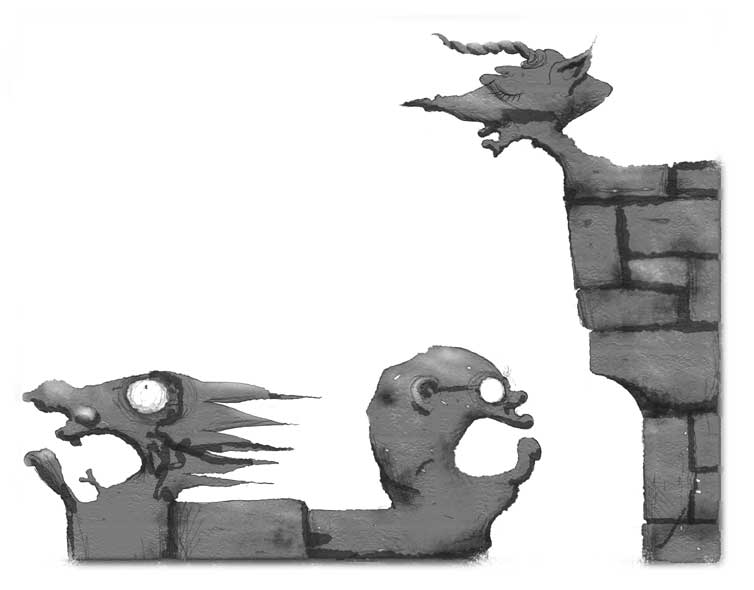 Quicklime College is more than a school, it's a way of life. And unlike normal school, you don't leave forever at the end of year 12. Quicklime's is a place you go back to your whole life. If you have a problem you can't solve, you can always find the answer at Quicklime's, either in the great library or in the brains of the professors, who have lived for thousands of years.

Very few Quicklime's students ever want to take a day off from school and, if they are sick, they usually stay in the school sick bay rather than go home. Matron has far more powers than the average witch and a list of incredible medicines as long as your arm. She even has medicines longer than your arm, ancient recipes from mythical ages lost in the mists of time, when dinosaurs roamed the world â which they actually still do in Quicklime College's valley.

Sorry I Peed on You (and Other Heartwarming Letters to Mommy) by Jeremy Greenberg
Dangerous Kisses by Trish Milburn
One Night with Sole Regret 03 Take Me by Olivia Cunning
Spyforce Revealed by Deborah Abela
Stay by Riley Hart
Ribbon of Steele: A Romance of Suspense by Jq Allan
Restoration by Guy Adams
Barbara Freethy - Some Kind Of Wonderful by Some Kind Of Wonderful
Ask Me Again Tomorrow by Olympia Dukakis
Looking Good Dead by Peter James