• A selection of the
Essence Magazine
Book Club

• A selection of the Black Expressions Book Club

“Moody, lyrical prose reminiscent of Toni Morrison’s
Beloved
… Though the fictional Abigail exists only on the pages of Abani’s novella, her character will seize the imagination of everyone who reads her story.”

“Abani is a fiction writer of mature and bounteous gifts …
Becoming Abigail
is more compressed and interior [than
GraceLand]
, a poetic treatment of terror and loneliness … its sharp focus on the devastation of one young woman, has a deeper kind of resonance … Abani, himself incarcerated and tortured for his writings and activism in Nigeria in the mid-’80s, writes about the body’s capacity for both ecstasy and pain with an honesty and precision rarely encountered in recent fiction … This is a powerful, harrowing work, made more so because, while much of the narrative seems to be a vortex of affliction, Abigail’s destiny is not inevitable. The small canvas suits Chris Abani.”

“Becoming Abigail,
a spare yet voluptuous tale about a young Nigerian girl’s escape from prostitution is so hypnotic that it begs to be read in one sitting … Abigail is sensitive, courageous, and teetering on the brink of madness. Effortlessly gliding between past and present, Chris Abani spins a timeless story of misfortune and triumph.”

“A darkly poetic investigation into the past’s deceptive hold over the present … Abani writes in dense, gorgeous prose. Abigail is not a creature of pity but inspiration.”

“Compelling and gorgeously written, this is a coming-of-age novella like no other. Chris Abani explores the depths of loss and exploitation with what can only be described as a knowing tenderness. An extraordinary, necessary book.”

“Abani finds his place in a long line of literary refugees, from the Mexican revolutionary Ricardo Flores Magon to Bertolt Brecht and Theodor Adorno …
Becoming Abigail
is, not surprisingly, about memory, loss, and all the cruel disjunctions of exile. Not for a moment, though, does Abani allow himself that most tempting stupefacient of exile, nostalgia. Abani’s prose is diaphanous and poetic. His lyricism is elliptical, almost evasive …
Becoming Abigail
is a hard, unsparing book, cruel in its beauty, shocking in its compassion.”

“A lyrical yet devastating account of a young woman’s relocation to London from Nigeria … Abani’s abundant talent is clearly evident throughout, as is his willingness to be brutally honest without being grotesque. He also refrains from polemics and focuses solely on the artistic presentation of a young, tragic life, leaving interpretation to the reader.”

“Abani’s voice brings perspective to every moment, turning pain into a beautiful painterly meditation on loss and aloneness.”

—Aimee Bender, author of
The Girl in the Flammable Skirt

“A searing girl’s coming-of-age novella in which a troubled Nigerian teen is threatened with becoming human trade … Recalling Lucas Moodyson’s crushing
Lilya4Ever,
this portrait of a brutalized girl given no control over her life or body, features Abani’s lyrical prose and deft moves between short chapters.”

“Spare, haunting vignettes of exquisite delicacy … Never sensationalized, the continual revelations are more shocking for being quietly told, compressed into taut moments that reveal secrets of cruelty—and of love—up to the last page. Abani tells a strong young woman’s story with graphic empathy.”

“Abani’s writing never becomes didactic—
Becoming Abigail
has the elegance and lyricism of a prose poem but doesn’t soft-pedal the abuse it chronicles.”

“Abani’s empathy for Abigail’s torn life is matched only by his honesty in portraying it. Nothing at all is held back. A harrowing piece of work.”

“Abani writes in a fearless prose … He is able to toe that line between restraint and abundance, unfolding Abigail’s history like the raising of a bandage.”

“Extraordinary … This book works brilliantly in two ways. As a convincing and unpatronizing record of life in a poor Nigerian slum, and as a frighteningly honest insight into a world skewed by casual violence, it’s wonderful … And for all the horrors, there are sweet scenes in
GraceLand
too, and they’re a thousand times better for being entirely unsentimental … Lovely.”

“Chris Abani’s
GraceLand
is a richly detailed, poignant, and utterly fascinating look into another culture and how it is cross-pollinated by our own. It brings to mind the work of Ha Jin in its power and revelation of the new.”

“
GraceLand
amply demonstrates that Abani has the energy, ambition, and compassion to create a novel that delineates and illuminates a complicated, dynamic, deeply fractured society.”

“A wonderfully vivid evocation of a youth coming of age in a country unmoored from its old virtues … As for the talented Chris Abani, his imaginary Elvis is as memorable as the original.”

“
GraceLand
teems with incident, from the seedy crime dens of Maroko to the family melodramas of the Oke clan. But throughout the novel’s action, Abani keeps the reader’s gaze fixed firmly on the detailed and contradictory cast of everyday Nigerian life. Energetic and moving … Abani [is] a fluid, closely observant writer.”

“Abani has written an exhilarating novel, all the more astonishing for its hard-won grace and, yes, redemption.”

“Ambitious … a kind of small miracle.”

“It is to be hoped that Mr. Abani’s fine book finds its proper place in the world … [Abani’s] perception of the world is beyond or outside the common categories of contemporary fiction and he is able to describe what he perceives compellingly and effectively … [Abani captures] the awful, mysterious refusal of life’s discrete pieces to fit.”

“An intensely vivid portrait of Nigeria that switches deftly between rural and urban life.”

“Singular … Abani has created a charming and complex character, at once pragmatic and philosophical about his lot in life … [and] observes the chaotic tapestry of life in postcolonial Africa with the unjudging eye of a naïve boy.”

“Abani masterfully gives us a young man who is simultaneously brave, heartless, bright, foolish, lustful, and sadly resigned to fate. In short, a perfectly drawn adolescent … Abani’s ear for dialogue and eye for observation lend a lyrical air … In depicting how deeply external politics can affect internal thinking,
GraceLand
announces itself as a worthy heir to Chinua Achebe’s
Things Fall Apart.
Like that classic of Nigerian literature, it gives a multifaceted, human face to a culture struggling to find its own identity while living with somebody else’s.”

“
GraceLand
is an invaluable document.”

“Remarkable … Chris Abani’s striking new novel,
GraceLand
, wins the reader with its concept—an Elvis impersonator in Nigeria—and keeps him with strong storytelling and characterization …
GraceLand
marks the debut of a writer with something important to say.”

“
GraceLand
paints an often horrific and sometimes profound portrait … Though a work of fiction,
GraceLand
also serves as a history far more powerful and fantastic than any official account of Nigeria’s teetering progress toward democracy.”

“The book’s juxtaposition between innocence and bleak survival is heartrending … Sharp, graphic, and impossible to dismiss.” 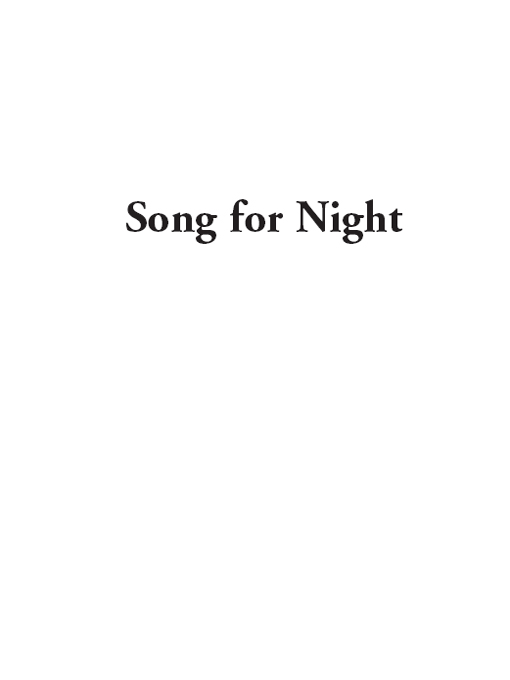 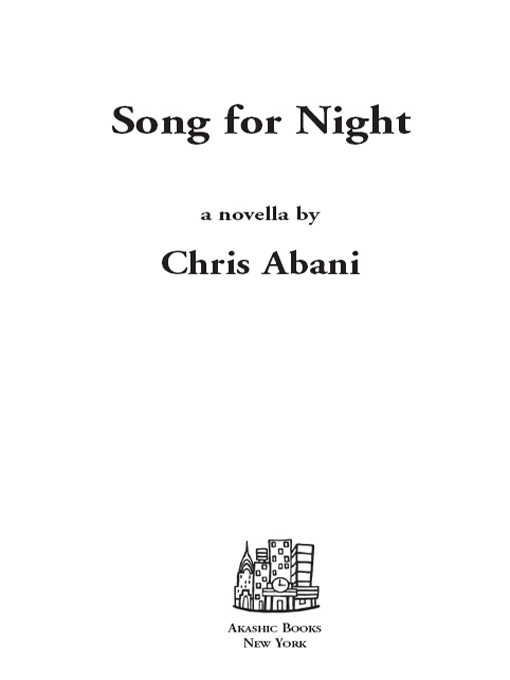 Night Is a Palm Pulled Down over the Eyes

Death Is Two Fingers Sliding across the Throat

Memory Is a Pattern Cut into an Arm

Imagination Is a Forefinger between the Eyes

Dawn Is Two Hands Parting before the Face

Danger Is a Deeper Silence

Love Is a Backhanded Stroke to the Cheek

Listening Is a Hand Cupping an Ear like a Seashell

Fish Is a Hand Swimming through the Air

Ghosts Are a Gentle Breath over Moving Fingers

Mercy Is a Palm Turning Out from the Heart

Dreaming Is Hands Held in Prayer over the Nose

Town Is Hands Making Boxes in the Air

A Thumb in the Air, Clicking an Imaginary Lighter

River Is a Flat Snake

Alibi Creek by Bev Magennis
Marine One by James W. Huston
The Art of Redemption by Ella Dominguez
The Hungry Tide by Amitav Ghosh
Luck by Joan Barfoot
Marja McGraw - Bogey Man 01 - Bogey Nights by Marja McGraw
Shana Abe by A Rose in Winter
Letters to the Lost by Iona Grey
The Love Laws by Larson, Tamara
Shotgun Bride by Linda Lael Miller