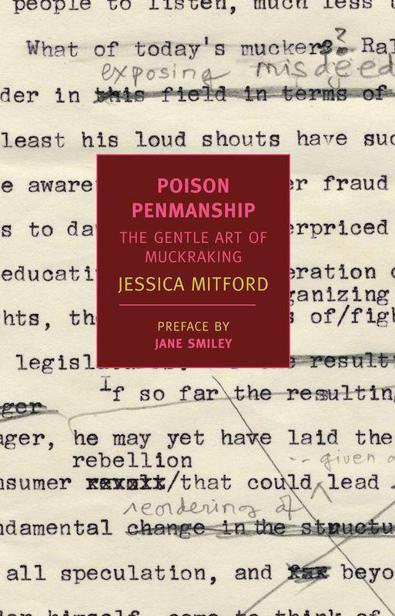 JESSICA MITFORD (1917–1996) was the daughter of Lord and Lady Redesdale, and she and her five sisters and one brother grew up in isolation on their parents’ Cotswold estate. Rebelling against her family’s hidebound conservatism, Mitford became an outspoken socialist and, with her second cousin and husband-to-be Esmond Romilly, ran away to fight against Franco in the Spanish Civil War. Romilly was killed in World War II, and Mitford moved to America, where she married the lawyer and political activist Robert Treuhaft. A brilliant muckraking journalist, Mitford was the author of, among other works, a memoir of her youth,
Hons and Rebels
(also published as an NYRB Classic); a study of the funeral industry,
The American Way of Death
; and
Kind and Usual Punishment: The Prison Business
. She died at the age of seventy-eight while working on a follow-up to
The American Way of Death
, for which, with characteristic humor, she proposed the title “Death Warmed Over.”

JANE SMILEY, winner of the 1992 Pulitzer Prize for Fiction, is the author of many novels and other works. In 2010 she published
Private Life
, a novel;
A Good Horse
, a book for young adults; and
The Man Who Invented the Computer
, the first volume of the Sloane American Inventors series.

The Gentle Art of Muckraking

St. Peter, Don’t You Call Me

My Way of Life Since The American Way of Death

“Something to Offend Everyone”

A Talk with George Jackson

My Short and Happy Life as a Distinguished Professor

The Best of Frenemies

Checks and Balances at the Sign of the Dove

The Dove Strikes Back

If there is a more forthright, good-natured, and witty American investigative journalist than Jessica Mitford, I don’t know who it would be. In the course of a career that spanned almost forty years, Mitford wrote eleven books (including a volume of letters collected after her death). Carl Bernstein, in an afterword to an earier edition of
Poison Penmanship
, calls her “an amateur,” but she was hardly inexperienced as either a reader or a writer, as her many hilarious and insightful letters show. In fact, she was self-educated, like the great majority of women writers once were (including Jane Austen and Virginia Woolf)—haphazardly but effectively.

Poison Penmanship
is conceived not only as a collection of occasional pieces but, since Mitford enjoyed the teaching posts she held once she had established herself as a journalist, also as a how-to book for aspiring muckrakers. The lengthy introduction describes how she got started writing and gives tips—how to gather background information, how to interview (meaning how to get antagonistic interviewees to betray themselves), how to find information not available to the general public, how to recognize a blind alley, and how to organize and write the article. She also discusses potential consequences of a career in muckraking. In the section labeled “Libel,” she writes, “I have often been asked whether I have been sued for libel in the course of my writing career. The answer is no, alas.” Mitford was careful to check her facts.

Mitford unabashedly wrote for money, and part of her charm in this volume is in the afterword to each piece, in which she describes how she came to the subject and what the challenges were—the challenges of writing about a silly upscale spa seem to have been greater than the challenges of writing about a surge in the rate of syphilis infection among teenagers of the 1960s and the refusal of NBC to air two fairly anodyne but explicit episodes of popular programs on the subject, even though the government begged the network to do so (“Not in the best interests of the viewing public,” said the network). Mitford’s specific argument evolves into a condemnation of the bland commerciality of network TV. One wonders what she would have made of
Jon and Kate Plus Eight
or
Fear Factor
.

Above all things, Mitford liked a worthy opponent, and her weapons of choice were factual accuracy and a tone of amazement. Perhaps the best piece in here is “Let Us Now Praise Famous Writers,” in which she reveals the anatomy of the scam that was the Famous Writers School, a correspondence course that was advertised through magazines then sold through coercive follow-up visits by “representatives.” The advertising materials promised personal attention to a student’s manuscripts by such literary luminaries as the head of Random House, Bennett Cerf, as well as popular writers, all of whom lent their names to the advertising campaign and invested in the school, although none engaged with the “students.” In this piece, Miss Mitford is a bit less amused, and the result was suitable embarrassment all around.

With her customary honesty, Mitford raises the question of whether muckraking journalism is effective or not at changing the world for the better. She mentions Lincoln Steffens (who eventually decided that it wasn’t) and Ralph Nader (who is still at it), as well as Robert Scheer (then young, who is also still at it). She is honest about the immediate results of her own exposés—some worked better than others. From our vantage point in a time when muck is being raked (and flung) vehemently and constantly twenty-four hours a day, the question of effectiveness is overwhelmed by the question of whether any person in America with access to the media remains shockable or persuadable. In this regard, Mitford was a toiler in the muck who cared about facts and believed in the idea that her fellow citizens were generally honest and expected the same of business and government. She might have been daunted by the way that lies and spin have taken over our public discourse. But given her habit, in
Poison Penmanship
, of being thrilled by a good fight, I doubt it.

for their inestimable help

In his essay “Stop the Press, I Want to Get On,” Nicholas Tomalin, a talented and versatile English journalist, wrote: “The only qualities essential for real success in journalism are ratlike cunning, a plausible manner, and a little literary ability.” He added, “The capacity to steal other people’s ideas and phrases—that one about ratlike cunning was invented by my colleague Murray Sayre —is also invaluable.”

In this collection I have tried to reconstruct my own efforts, over a twenty-year period, to acquire these qualities and to demonstrate, through one person’s experience, the development of investigative techniques. In the comment accompanying each piece or group of pieces, I have sought to convey something of the story-behind-the-story: how I stumbled onto the particular subject; the joys and sorrows of research, the lucky breaks and mistakes, things overlooked through sheer ineptitude for which one could kick oneself; difficulties of getting published; and in some cases the afterglow of satisfaction (how the Famous Writers went bankrupt) or the aftermath of dissatisfaction (see comment on “My Short and Happy Life as a Distinguished Professor”). And now, thinking it all over, I would say there are two important omissions from Tomalin’s otherwise excellent list of essential qualities: plodding determination, and an appetite for tracking and destroying the enemy.

As even muckrakers take an occasional day off for other pursuits, I have sneaked in some pieces that do not belong to this category because they illustrate some of the problems encountered in preparing articles for publication: “The Best of Frenemies,” “Proceed with Caution,” and “Egyptomania.”

I first began to think of myself as a muckraker when
Time
, commenting in its press section on the Famous Writers School Fracas (see page 148), called me “Queen of the Muckrakers.” I rushed to the dictionary to find out what I was queen of, and discovered that “muckraker” was originally a pejorative coined by President Theodore Roosevelt to describe journalists like Lincoln Steffens and Ida Tarbell, who in his view had gone too far in exposing corruption in government and corporate enterprise. Thus the
Oxford English Dictionary
says “muckrake ... is often made to refer generally ... to a depraved interest in what is morally ‘unsavoury’ or scandalous.” (I fear that does rather describe me.) In the
OED
supplement of 1933, “muckraker” has come up in the world a little bit and is now defined as “one who seeks out and publishes scandals and the like about prominent people.” And by 1950 additional respectability is conferred by
Webster’s New International Dictionary
, defining “muckrake” as “To seek for, expose, or charge, esp. habitually, corruption, real or alleged, on the part of public men and corporations.”

As a consequence of my
Time
-bestowed sovereignty, I was invited to teach a course in muckraking at San Jose State University, and later at Yale. These were workshop sessions in which my students undertook actual investigations of “corruption real or alleged” in their college or community. Together we explored techniques of research, how to conduct interviews, how to put the results together in readable form. Some of our findings:

CHOICE OF SUBJECT is of cardinal importance, as one does by far one’s best work when besotted by and absorbed in the matter at hand. After the publication of
The American Way of Death
(a study of the funeral industry), I got hundreds of letters suggesting other infamous rackets that should be investigated and exposed. I discerned a pattern to these letters—all from rightly disgruntled victims—and began to file them by categories. Surprisingly, complaints about hearing aids led the field. These cheaply mass produced, inefficient little gadgets, sold at extortionate prices to desperate people, are doubtless a source of unconscionable profits to a predatory industry and of hardship to countless buyers; but somehow, although there may well be need for such an exposé, I could not warm up to hearing aids as a subject for the kind of thorough, intensive, long-range research that would be needed to do an effective job.

In my Yale class, each student (or group of students if they preferred to work in teams) chose his or her own subject to investigate. Those who tackled hot issues on campus, such as violations of academic freedom, or failure to implement affirmative-action hiring policies, turned in some excellent work; but the lad who decided to investigate “waste in the Yale dining halls” was predictably unable to make much of this trivial topic.

GATHERING BACKGROUND INFORMATION. The goal is to know, if possible,
more
about your subject than the target of the investigation does. To this end, I soak up books and articles on the subject, type out relevant passages, and accumulate a store of knowledge before seeking an interview with said target.

Obvious reference sources are the
Readers’ Guide to Periodical Literature, The New York Times Index
, and back copies of news weeklies, all easily available in any library. Harder to come by are small provincial newspapers which may be a prime source for the light they shed on local issues not covered by wire services or major metropolitan dailies. These can often be had on microfilm through the inter-library loan system. I learned about this invaluable service from a library school student who was helping with the research for
A Fine Old Conflict
, memoirs of my subversive life during the McCarthy era. I was writing a chapter about the case of Willie McGee, a black man falsely accused of rape in Mississippi, which had received only perfunctory attention in
The New York Times
and the news weeklies. The student procured the Jackson, Mississippi,
Daily News
for a three-month period in 1951, the only charge a fee for postage. This newspaper, its blood-thirsty coverage of McGee’s execution, its virulent editorials echoing the authentic voice of the Ku Klux Klan, re-created as nothing else could the violent and pervasive racism in the deep South of those days.