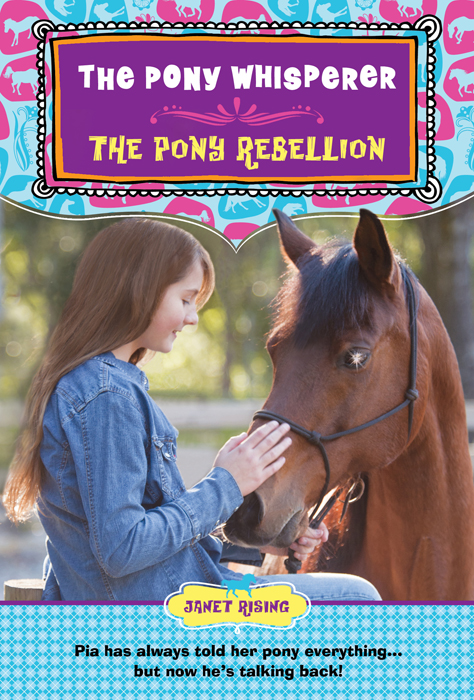 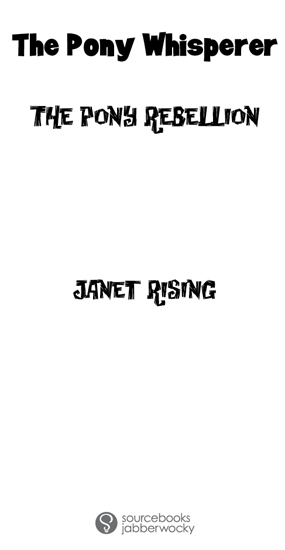 First published in Great Britain in 2010 by Hodder Children's Books.

OK, come clean, what have you all done wrong?” asked James, running his hand through his dark blond hair so that it stood up on end.

“Nothing,” said Katy, “but thanks for the vote of confidenceâ
not!
Besides, we might ask you the same thing!”

“I feel as though I've done somethingâeven though I know I haven't,” sighed Bean. “Er, Pia, what's my feed scoop doing on your hay bales?”

“You left it there,” I told her, trying not to look at James. I feel kinda funny whenever he does that thing with his hair, and I was scared someone else would notice. “You're always leaving stuff on my hay.”

“Am I? I wondered where that went,” Bean mumbled, casually lobbing her scoop back toward her corner of the barnâeveryone had a sectioned-off part in the building where they kept their own pony's feed and bedding. The scoop disappeared into the black hole of empty feed sacks, baler twine, and buckets that was Bean's domain. It was easily the messiest part of the barn and so very Bean.

“What did Sophie say to you, Pia?” Katy asked, tying her red hair back behind her head with a band.

“She just said to be in the barn at ten o'clock Saturday because she had something important to say,” I told her, remembering that Sophie had winked when she'd told me, which I had found a little weird.

“She's late, anyway,” remarked James, looking at his watch. “If she's not here in two minutes, I'm going. Anyone want to go riding? I thought I'd take Moth up to Badger's Copse then back through the hillside for a good ride.”

“So you're in on whatever it is too, are you?” asked Katy.

“I'll come riding with you,” I told James.

“Count me in,” added Bean. “I couldn't ride last night so Tiffany will be fresh. Plus it's cold today, so she'll be even livelier.”

It was cold, the sort of dry cold that usually follows a heavy frost. The sun was out, but it was too early in the morning to compete successfully against the chill. Even in the barn I could see my breath hanging in the air like mini clouds as I spokeâbut I love frosty mornings. They're so much better than those dank, dark, dismal, drizzly days that put everyone in a bad mood, especially me. It was early November, and the ponies were all clipped and in at night. I thought of Drummer, rugged up and warm in his stable. He was bound to put in a buck or two on our hack before settling down, especially if the other ponies were fresh too. I'd have to keep my knees in and my heels down if I wanted to keep admiring the scenery, rather than sitting in the middle of it.

Suddenly, we heard a car in the drive. Two doors slammed shut.

“At last!” said James, as Dee-Dee and her mom, Sophie, appeared at the barn doorway. “Now maybe we'll find out what the big secret is!”

But Sophie, as usual, was on her cell phone. “Yes, OK,” she said, nodding (don't know why, whoever she was talking to couldn't see her). “I'm just about to ask them now. Yes, that's right. No worries. Absolutely. Sure thing. I'll get back to you directly, Linda, and let you know what we'll be doing. Sure. OKâ¦” Dee-Dee looked at all of us and rolled her eyes. I heard James sigh. Well, it was more of a
huff
, really. And then someone I didn't want to see walked through the barn door.

“What mystery?” Cat asked, her short, dark hair sticking up in that sassy way it does, giving her the sort of air about her that stops you from messing with her. “Sophie just asked me to be here at ten so here I am.”

My heart sank. Catriona and I do not get along. Actually, that's an understatement; we don't just not get along, we don't get along in an epic way. In the past, Cat has plotted against me, plotted against Drummer, and wasted no opportunity to diss me in front of anyone passing by. She used to go out with James (which was the best way to get to meâonly I'd die if anyone knew that), which means that things are sometimes a bit strained between the two of them now. She's the only negative at Laurel Farm, where I keep Drum. Oh, and she's adamant that I am not a Pony Whispererâeven though I can totally hear what horses and ponies are saying (under one important condition) and everyone else is on board with it. I think that's our relationship in a nutshell. Except that when I went away on a riding trip with Bean in the spring, leaving my beloved Drummer in the capable hands of Katy, it was Catâthrough a cruel twist of fateâthat ended up looking after him. And, naturally, I then had to thank her when I returned, especially as she'd looked after him really well. Only when I'd thanked her and given her the gift I'd intended to give to Katy, Cat had shrugged her shoulders, just mumbling an OK at me. It had been awkward. Since then we've gone back to avoiding each other.

Sophie finally snapped her cell phone shut and looked around at us all. “Thanks so much for coming,” she began, smiling. She was wearing riding clothes and looked very glamorousâsomething showing people seem to be able to do without effort. “I have a proposition to make to you all.”

“Isn't that something to do with grammar?” Bean whispered to me, on planet Bean, as usual.

“That's a preposition,” I whispered back. “I thinkâ¦”

“My friend Linda is manager at the Taversham branch of the Riding for the Disabled Association. You've probably heard of it,” Sophie began.

We all nodded. Taversham was about ten miles away from Laurel Farm.

“Well, Linda is putting on an Equine Extravaganza in their indoor school at Christmas to raise funds, and she's asked me to organize an event to be included.”

“If Sophie thinks I'm baking cakes or selling programs she's crazier than I thought,” James whispered to me under his breath.

“Shhh,” I said. I thought Sophie was strange too, but she was strange in a totally horsey way so I forgave her.

“So I thought it would be wonderful for everyone here to take part in a musical activity ride and perform it on the night of the extravaganza,” Sophie concluded. “It's for a great cause, it will be so much fun, and I'm sure you'll all get a lot out of it.”

I haven't told you everything about Dee-Dee's mom, have I? She isn't the sort of person you say no to, even if you wanted to. She has a show horse called Lester and Dee shows her own pony, dappled gray Dolly Daydream, at all the top shows. Not just for funâSophie is dead serious about it, and poor Dee is always having lessons and training when she'd rather be out riding with us. Only Dolly's very expensive so she can'tâmainly because we're always flying around the country out of control. As Sophie finished speaking, Dee looked puzzled. “Are you including me?” she asked.

“Yes, of course!” Sophie replied briskly, as though Dee was stupid.

“Dolly of course. Who do you think?”

“All the practices will be on soft ground in the school, so there should be no problem with her legs,” her mother replied. “Honestly, Dee, who else would you ride?”

“It sounds like a great idea,” enthused Katy. “But what exactly is an activity ride?”

“It's a musical ride where you'll go over small jumps in different formations. Sort of like the Rockettes but with horses. And more jumps. You get the picture?” Sophie explained. “It's spectacular. I'll give you all a letter explaining it for you to take home and get your parents to sign. They have to be totally on board with you all doing it and agree to the practices as well as the performance. Obviously you won't need one, Dee,” she added.

“You mean I can jump Dolly?” Dee asked incredulously.

“Yes, Dee. They're only tiny onesâbunny hopsâjust stop pushing me about it!” said Sophie impatiently.

“It's a miracle!” breathed Dee, falling backward on a hay bale in a mock faint, completely flabbergasted.

Dee wasn't the only one who was surprisedâI couldn't believe Sophie was being so casual about Dolly either. It was unheard of.

“Count me in,” said James. “Just let me know what you want me to do and I'll be there with Moth. The RDA is a fantastic cause, and it sounds like a great thing to do.”

“Me too,” said Bean. “There's no way Tiffany and me are being left out!”

“Wild horses wouldn't prevent Bluey and me from being in it too!” agreed Katy, bouncing up and down on a feed sack in excitement.

“And me,” I said. It sounded like funâI'd always admired pony performances and wanted to do something like it, and now here was my chance. I felt a tiny flutter of excitement in the pit of my stomach. I pictured Drum and me sailing over jumps in style, bursting through hoops of paper, soaring through jumps of fire. I imagined a packed gallery clapping and cheering us all in admiration. It would be like being on a TV reality show or something. I mean, how fantastic!

“You can definitely include me and Bambi,” said Cat enthusiastically.

The flutter of excitement inside me died, plummeting like it had been shot, and I chewed the inside of my cheek. How was that going to work, me and Cat on a team together? Riding together? Practicing together? Oh for goodness' sake, I thought, we could stay at opposite ends of the ride and pretend that the other wasn't there. I was sure that would work.

It had to work. I wasn't going to be the only one not included in Sophie's activity rideâit sounded like too much fun!