Read The Smoke at Dawn: A Novel of the Civil War Online

The Smoke at Dawn: A Novel of the Civil War 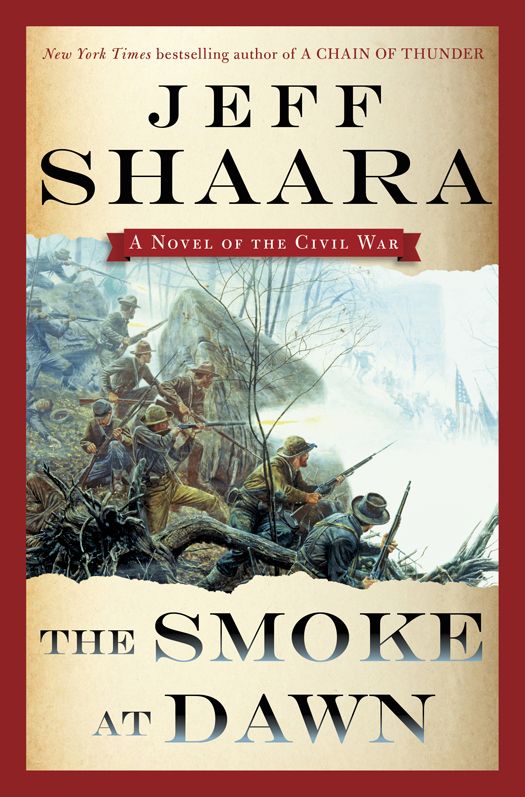 The Smoke at Dawn
is a work of historical fiction. Apart from the well-known actual people, events, and locales that figure in the narrative, all names, characters, places, and incidents are the products of the author’s imagination or are used fictitiously. Any resemblance to current events or locales, or to living persons, is entirely coincidental.

B
ALLANTINE
and the H
OUSE
colophon are registered trademarks of Random House LLC.

This novel is the third in what will become a four-book set, taking place in the “Western” theater of the Civil War. As with the first two in this series, I follow several historical figures by telling you the story through their eyes, from their own points of view. Though the history is accurate, and every event happened as portrayed, because there are thoughts and dialogue, this has to be described as fiction.

This story deals with the critical campaign around Chattanooga in the fall of 1863. Consistent throughout this entire series is the voice of Union general William T. Sherman. Here, as well, are Ulysses S. Grant and George Thomas. On the Confederate side are two widely different personalities: Confederate commanding general Braxton Bragg, and Major General Patrick Cleburne. Also in this story is a voice I introduced in the first two books, that of Private Fritz “Dutchie” Bauer. I have come to accept that no story like this can be told effectively without focusing on the man with the musket, who truly determines if the decisions of the generals will succeed or fail.

In every case my research takes me back to this time, to the thought processes of the characters themselves. I am often asked about my research, and many times I’ve been asked
“How do you write the dialogue?”
There is no easy answer to that. The Acknowledgments section in this book offers a glimpse into the original sources, including diaries, memoirs, and collections of letters that offer enormous assistance in my efforts to find out just who these people are, to hear the “voices.” My job then is to tell you what I hear. That might sound a little “mystical” (or a little schizophrenic), and I don’t believe I’m either. The goal, ultimately, is to put words in the mouths of memorable and historically important people. If those words are not accurate to who that person was, either by deed or personality, the dialogue will come across as counterfeit—first to me, and most certainly to you. That’s the magic of the research, and, I hope, the magic of the writing process.

It has been extremely gratifying to hear from so many readers, either through my website or on the road throughout my book-signing tours, who might have had no real interest in this particular topic (not everyone is a Civil War buff), but who have been drawn into these stories. One point I emphasize to every audience I speak to is that this is not a history book, nothing like what you were required to read in high school. My father, Michael Shaara, taught his creative writing students at Florida State that if you have any interest in writing a story, you must start and end with exactly that: the story. That’s a lesson I’ve taken to heart for the past twenty years. I am under no illusions that if my father were still alive, many of the books I’ve written would have been his stories to tell. His masterpiece,
The Killer Angels
, is now forty years old, and is currently in its 112th printing. He died in 1988, having no idea what he had left behind.

The 150th anniversary of the Civil War has already been commemorated in all fifty states. I’m honored to have been a part of many of those events. Unfortunately, this four-year anniversary has overshadowed other milestones from our history, notably the bicentennial of the War of 1812, and, in 2014, the centennial of the start of World War I. With all due respect to those whose interests lie outside of the Civil War, the attention this particular anniversary has received is, to me, a sign of the power that the Civil War still holds over us. There are enormous numbers of descendants of the veterans of that war who still honor their ancestry in very graphic and impressive ways. (I have been caught completely off guard by the extraordinary emotions that pour through many events involving both the Sons of Union and Sons of Confederate veterans.) But even those with no personal connection at all continue to be drawn to the great fields where the war was fought, most notably Gettysburg. I was amazed how many visitors to the 150th anniversary events in July 2013 were making the trip to Gettysburg for the first time—and how many of those insisted they would return. I am a rabid supporter of battlefield preservation, and that kind of ongoing interest and passion is reassuring. As entertaining or enlightening as any battlefield might be, for me,
the ground
is an essential part of the research. As I mention in the introduction to my nonfiction
Battlefields
book, as the zoo is not the jungle, so the museum is not the battlefield. If any of these stories and characters are appealing to you, I implore you to see these places for yourself. You might find, as I did many years ago, that you are captured by what happened there. And perhaps you might sit down and write a book.

Troop Positions at End of September