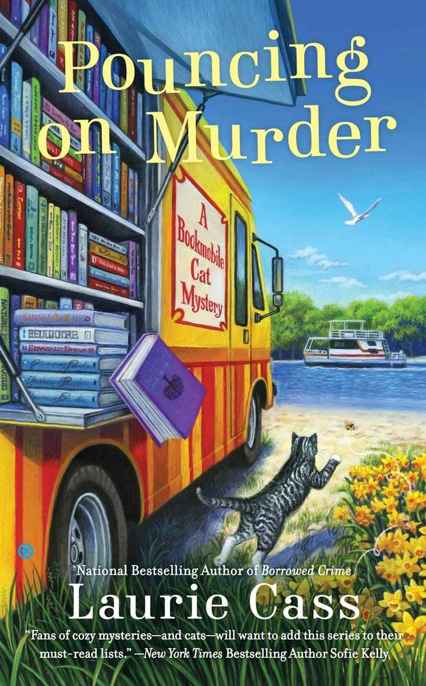 “Charming. . . . Librarian Minnie Hamilton is kindhearted, loyal, and resourceful. And her furry sidekick, Eddie, is equal parts charm and cat-titude. Fans of cozy mysteries—and cats—will want to add this series to their must-read lists.”

“With humor and panache, Cass delivers an intriguing mystery and interesting characters.”

“A pleasurable, funny read. Minnie is a delight as a heroine, and Eddie could make even a staunch dog lover more of a cat fan.”

“Charms with a likable heroine, [a] feisty and opinionated cat, and multidimensional small-town characters.”

“Almost impossible to put down . . . the story is filled with humor and warmth.”

“At times laugh-out-loud funny, at other times touching, while many other times are fraught with hair-raising events.”

“A quick, fun, delightful read. You won’t want to put it down until the very last page!”

“This delightfully charming whodunit is a welcome addition to the cozy genre . . . a terrific read.”

This book is an original publication of New American Library.

Penguin Random House supports copyright. Copyright fuels creativity, encourages diverse voices, promotes free speech, and creates a vibrant culture. Thank you for buying an authorized edition of this book and for complying with copyright laws by not reproducing, scanning, or distributing any part of it in any form without permission. You are supporting writers and allowing Penguin Random House to continue to publish books for every reader.

Obsidian and the Obsidian colophon are trademarks of Penguin Random House LLC.

Excerpt from
Cat with a Clue

To Jon. Always. FYI, this is your fifth dedication. Not that it’s a contest or anything.

T
hroughout the long winter, I’d often dreamed about the month of April. It would be warm, I’d thought. Sunny. There would be baby lambs and fluffy white clouds and daffodils and we’d be able to walk outside without boots and hats and thick coats and mittens.

In the northern part of Michigan’s Lower Peninsula, however, the reality of April was a little different.

I switched on the bookmobile’s windshield wipers. They groaned as they tried to move against the slush spattering the glass, but inch by inch they gained speed and finally arced across, shoving the white stuff away.

“Remember the April eight years ago?” Julia Beaton asked. There was an element of wistfulness in her expressive voice.

“Nope,” I said cheerfully. “This is only my fourth spring in Chilson.” I’d spent many a youthful summer with my aunt Frances, but I hadn’t lived in Chilson until I’d had the great good fortune to be offered the job of
assistant director at the Chilson District Library. The decision had taken less than a second to make.

A job in my favorite place in the world? In a region teeming with lakes of all sizes, in a land of forested hills, in a small town filled with outstanding restaurants and eccentrically original retail stores, and in a library building lovingly converted from an old school? Sure, there was winter to deal with, a season that could last a solid five months, but I loved to ski, so where was the downside?

“It was the best April in the history of Aprils.” Julia sighed. “The April to beat all Aprils.”

“No snow?” I nodded at falling flakes.

“None whatsoever,” she said dreamily, rearranging her long strawberry blond hair into a loose bun. “Blue skies, warm air. It was a page from
Anne of Green Gables
.”

Right then and there I decided there was nothing better than a coworker who knew the same children’s books that you did. Julia was the perfect bookmobile clerk and I would be forever grateful to my aunt for finding her for me.

Back in December, the library had received a large donation to fund the bookmobile operations. The gift had almost made me weep with gratitude. Chilson’s bookmobile was my pet project, which meant it was my responsibility to find the money to run the program. Once the check cleared, I’d immediately started the hunt for a part-time bookmobile clerk, and the sixtyish Julia had been my happy hire.

Born and raised in Chilson, she’d moved to New York
City right out of high school to find fame and fortune as a fashion model. That particular career path hadn’t worked out, but her fallback career as an actor had worked out just fine. She’d found a satisfying amount of Broadway fame, saved her money, and waved good-bye to the bright lights as soon as the offers of leading roles slowed to a trickle. These days she taught an acting class at the local college, turned down every community theater role offered to her, and was always looking for ways to expend her considerable energy.

My aunt Frances, who taught woodworking classes at the same college, had made a paper airplane of the clerk’s job description and sailed it into her classroom. Julia, one eyebrow raised, had unfolded the paper and scanned the text. When she started to nod, Aunt Frances had smiled and walked away, dusting off her hands at a job well done.

Now I grinned, not taking my attention off the road. “If you don’t like winter, maybe you should consider moving to Hawaii.”

“Winter I like just fine,” she said. “It’s April that’s the trouble. No matter what temperature it is, you always want a little bit more.” She sighed, then looked at the large plastic carrier snugged up next to her feet. “What does Eddie think about April?”

Julia leaned forward, looking into the cat carrier through the wire door. “Good morning, young sir. How do you feel about the current weather conditions of cold, slushy, and wind tossed?”

Eddie and I had been together for almost a year. It had been an unseasonably warm day last April that lured me from inside chores to a long walk outside that ended at the local cemetery. Which sounds odd, but this particular cemetery had an outstanding view of Janay Lake and beyond to the bulk of the massive Lake Michigan.

While relaxing in the sun on a bench next to the gravestone of one Alonzo Tillotson (born 1847, died 1926), I was startled by the appearance of a large black-and-gray cat. He’d followed me home, where I’d cleaned him up as best I could, turning him black-and-white. I had responsibly run an ad in the newspaper and had been relieved when no one claimed him. Because of my father’s allergies, I’d grown up without pets. Eddie, who my vet estimated was now roughly three years old, was my first pet, and I wasn’t sure how I’d ever lived without my opinionated pal.

There’d been a little issue when my new boyfriend turned out to be allergic to cats, but after trying a series of various medications, he’d found one that worked just fine. Then again, since we were now in the midst of a long-distance relationship, he had probably let the prescription lapse. I made a mental note to send a text to remind him.

“Eddie,” Julia told my furry friend, “you must learn how to enunciate more clearly. Theatergoers in the top rows will never grasp your nuances unless you work on the consonants.”

Julia sighed and settled back. “He does not take advice well, does he?”

The interviewing process for the bookmobile job had included a tour of the bookmobile and an introduction to Eddie, because Eddie had been part of the bookmobile from the beginning. He’d stowed away on the maiden voyage and quickly become an integral part of the services we offered. Books, magazines, DVDs, video games, and Eddie hair, not necessarily in that order.

For months I’d felt the need to hide the feline presence on the bookmobile from my follow-the-policy-or-else boss, Stephen Rangel, but it turned out that Stephen had known about Eddie’s adventures from the beginning.