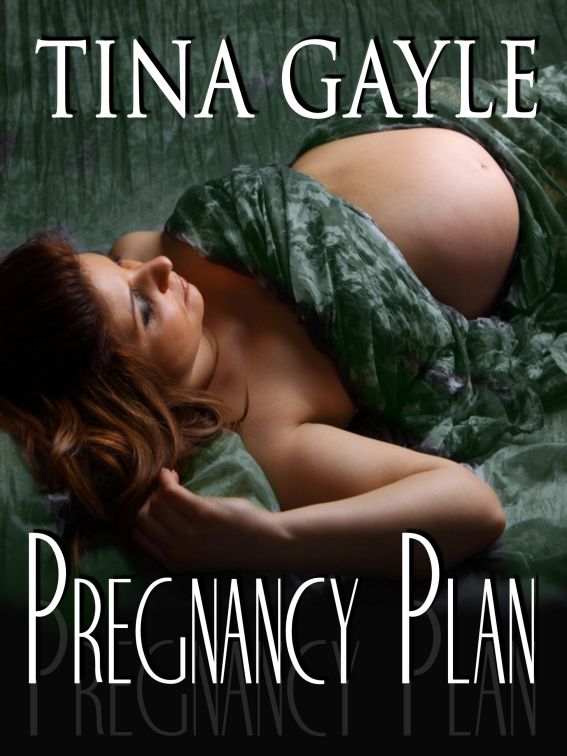 Pregnant shopkeeper Jillian Wilson prepares
for single parenthood until high-risk security specialist Derrick
Harris, the baby’s father, is caught in an explosion that changes
everything.

Confused, Derrick returns to the States with
amnesia. Jillian believes she has it all a husband, a baby, a
perfect life, to bad that her dreams hang on Derrick’s faulty
memory and a lie.

What others are saying about Tina Gayle's books.

“Pregnancy Plan” is not only a book I
enjoyed but I couldn’t put it down. I wanted to know when the lie
would blow up in their faces and what would happen when it did. I
loved this book and I’m looking forward to seeing what
Tina Gayle
comes up with
next.”

“Baby Decision --“As the relationship
develops between Colt and Susan we’re treated to a love story that
warms the heart.”

Baby Decision --“I love pregnant heroines in
stories and the struggles they endure. Ms. Gayle did a fabulous job
painting word pictures of the challenges this couple deals with,
and how they overcome them. I totally enjoyed the story.”

"Youthful Temptations is about a couple finding love
and overcoming stereotypes. We see that we all have baggage, it’s a
part of us, and those that love us don’t mind the load we carry.
Awesome story, I really enjoyed Youthful Temptations."

Reviewed by Raine at Review at Joyfully Reviewed

To all my family and friends that have offered their
support and encouragement through the years. Thank you.

This is a work of fiction. All characters
and events portrayed in this novel are fictitious or used
fictitiously. All rights reserved, including the right to reproduce
this book, or portions thereof, in any form.

Freedom waited. In anticipation, Jillian
Wilson posted the closed sign in the window of her hardware store.
She smiled at the neighboring storeowner, Mr. Jenkins, who sat in a
rocker on the wooden sidewalk that connected their
establishments.

She realized her mistake when he signaled
for her to come outside.

Opening the door, she leaned out. The warm
afternoon heat, fragranced with the sun-drenched aromas of a Texas
spring day greeted her. Wispy, cotton clouds dotted a bright blue
sky.

“
Hi, Mr. Jenkins, I don’t have much
time. I was just about to close for the weekend.”

He peered at her with a fatherly frown of
disapproval. “Yes, I know. Several people have mentioned you’re
headed out of town.” He shook his head. “Don’t rightly remember
your father ever taking a vacation when he didn’t have a backup for
the store.”

“
I know, but Michael wasn’t
available.”

“
Hot-rodding around in his new car.”
The old man’s offered his unsolicited opinion. “That brother of
yours should help. You could be losing a sizable amount of money
with it being the weekend after the East Texas Gusher events.
People will be wanting to do chores around their
houses.”

The wrinkles on Mr. Jenkin’s weathered face
grew deeper. “Not good for the town’s hardware store to be
closed.”

“
I’ve given everyone plenty of
warning.”

“
Still, I don’t think your father
would’ve liked it.”

Jillian swallowed her irritation. After all,
Mr. Jenkins had been butting into her business from the time she
was two. Stepping through the door to Mr. Jenkins’ side, she patted
his arthritic hand. The man worried about her like a father.

“
That’s true, but with Daddy gone and
Mike unwilling to help, there’s no chance to have a wild weekend
unless I close the store.” She winked. “A girl’s got to have a
little fun.”

Stepping back, she continued. “I know I can
count on my nice neighbor to keep an eye on the store.” She nudged
his shoulder. “Can’t I? You don’t want me to be alone the rest of
my life, do ya?”

“
Hell, no, but there’s plenty of men
around here you could hook up with.” He shook his crooked finger at
her. “Why just the other day that Hawkins boy was in my shop. He’d
make a nice husband for you.”

She smiled and edged closer to the shop’s
door. “Yes, well, that might be true, but I believe I’ll wait until
he graduates high school first.”

Mr. Jenkins frowned. “Oh, yeah, but the boy
can play a mean game of football. Did you see him last season? He
has a wicked arm.”

“
That he does.” She entered her store
and turned. “I’m sorry, Mr. Jenkins, I have to go. But you’ll watch
the store for me, right? If there’s any problems just call my cell
phone.”

She closed the door on his reply with a
friendly wave. Then she drew down the shade. Securing the lock, she
drew in a breath, anxious to escape town.

Wilson’s Hardware would survive a weekend
without her, and Gladewater, Texas, would never miss her.

Look out, Dallas, here I come.

Derek entered the condo, exhausted from a
day at the lake. He wanted a cold beer and a hot shower, in that
order.

Good thing he’d strong-armed his brother
into taking Kelly away for the weekend. He had the place to
himself, and Jason and his fiancée could use the relief from the
stress of planning their wedding.

Removing his sweaty shirt, he threw it over
his shoulder, opened the refrigerator, and grabbed a Bud. With a
quick twist of his wrist, he uncapped the bottle, and poured the
cold liquid down his throat.

He stepped around the bar separating the
kitchen from the dining area. The light on the answering machine
blinked. He hit the button.

A picture of a shapely woman flashed through
Derek’s mind.

“
Holy shit!” Every big-brother,
over-protective gene in his body kicked into gear.

The shattering sound of his beer bottle
hitting the floor and his fist connecting with the wall doused the
end of the message.

Could this be the reason Kelly was having
second thoughts about marrying Jason?

Peace greeted Jillian the moment she slid
the key card into the slot of her hotel room door.

She tugged her luggage across the threshold
and nudged the door close with her hip. The lock clicked into place
as she stowed her bags in the closet.

A grin spread across her face as she
surveyed the room, head turning like a child in a toy store. The
typical hotel room held all the luxuries shed needed for a
worry-free weekend. Tossing her handbag and key card on the
dresser, she scanned the view through the windows on the far side
of the room, then flopped down onto king-size bed draped in a
burgundy-and-green floral bedspread. Directly across from the bed
on the dresser stood a swivel television, just waiting for her to
flick on a movie.

Thrilled to be released from the chains of
responsibility, she leaned back onto the bed and closed her eyes.
The heavy emotional burden she’d carried around for the last few
weeks lightened. No one here knew her or expected anything from
her. She had nothing to prove, and no one to offer her any friendly
advice.

She stretched her arms above her head.
Finally, the grief shadowing her every move lifted.

A knock sounded on the door.

“
Who can that be?” Rising, she peered
through the security peephole and spotted a tall, dark-haired man,
his features slightly blurred by the fish-eye view.

She gulped in a quick breath and peeked
again at the handsome face.

“
Damn.” She didn’t want to open the
door, not with Derek on the other side, not to more
heartache.

“
Open the door. I want to talk to
you.” His stern military voice, the one she remembered hating,
demanded her compliance.

She glared at the man through the peephole.
How did he know she was here?

Then the pieces fell into place. The message
she’d left Jason. But why would he tell his brother? He knew Derek
didn’t want anything to do with her.

Their relationship hadn’t worked out.
A few dates, no calls, no e-mails, no communication.
The man isn’t interested.

So why come here?

The next knock rang louder.

After a quick brush of her hands through her
hair and a deep fortifying breath, she opened the door.

“
Hey, Derek, what’s up?” She spoke
into his broad chest. A head taller, her gaze traveled over his
curly hair to his clean-shaven face. She marveled at the difference
between the two brothers. Their hair color might be the same, but
every other feature stood in sharp contrast to the
other.

Jason’s lean form appeared slight when
standing next to Derek’s linebacker body. Jason had beautiful deep
brown eyes and a photo-perfect face, while Derek’s eyes were steel
gray. Piercing and cold, they stared through her. His face appeared
as if carved from stone.

A dark arrogant curl stood above the rest on
top of his head. Her hand lifted, tempted to brush it back in
place.

“
Are you inviting me in?” He stepped
forward.

“
No.” Her hand landed on his chest,
blocking his entrance. “Did Jason send you?”

“
You might say that.” He crowded
closer. “Do you want to have our conversation in the
hall?”

Singed by the heat radiating from him,
Jillian stepped back.

His glare examined her with hard intensity.
“He didn’t get it. I did.”

Even though his jaw was set in a rigid line,
he appeared calm. Yet she sensed intense emotions churning just
beneath the surface of his cool exterior.

She shook her head, unable to determine the
cause. “But he's been worried. Why didn’t you give him the
message?”

“
Jason is already involved with
someone.” Suspicion darkened Derek’s eyes. His whole manner
reflected restrained anger, a kettle ready to boil over. His gaze
burned.

“
I know. He and Kelly have been dating
for awhile now.”

“
If you know, then why the hell are
you sleeping with him? You barely let me kiss you good night when
we were dating.” He stepped forward, glaring into her face. The lid
of his temper lifted, the steam scalded her skin.

“
What?” Caught off guard by his
accusation and his closeness, Jillian gapped in disbelief. Was he
nuts? Did he really think she was having sex with his
brother?

Her eyes widened. Now it made
sense.
My message.

Derek must think—
Oh my!

In his normal overprotective fashion, he
rushed in to squelch the opposition.

How absurd—her with Jason. She couldn’t stop
the giggles that bubbled up in her chest. She edged past him with
an unladylike snort of laughter.