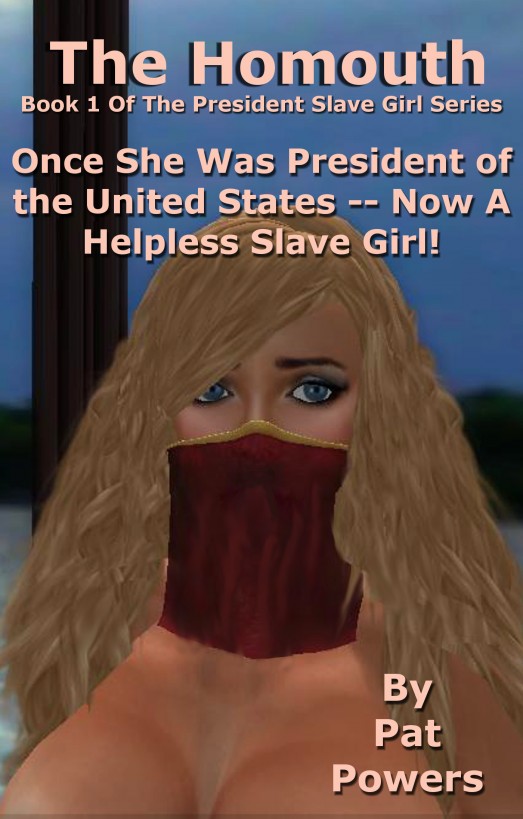 Book One of the President Slavegirl series.
See also Billionaire's Toy, Corporate Training, The Slut Whisperer
and President Slave Girl (all four books collected into one
volume).. Visit
Pat
Powers' International Bookstore
and see a list of all of the
stories and books he's written and where to find them.

All rights reserved. No part of this book may
be reproduced or transmitted in any form or by any electronic or
mechanical means, including photocopying, recording or by any
information storage and retrieval system, without the written
permission of the Author, except where permitted by law.

This is a work of fiction. Names, characters,
businesses, places, events and incidents are either the products of
the author’s imagination or used in a fictitious manner. Any
resemblance to actual persons, living or dead, or actual events is
purely coincidental.

Chapter 1
No one may permanently enslave you, but you
can be temporarily detained.

Eileen MacCammon maintained the calm, relaxed
demeanor she believed was proper on an occasion like this, but her
mind was a welter of anger, fear and a desperate but hopeless
desire to cling to her old life. And even though she knew her cause
was lost, there was a glimmer of hope that one of her lawyer's
legal tricks would work, and the judge would be lenient. She was
rich, after all, and everyone knows rich people do not thrive in
prison.

True, the arguments were all over. She had
been found guilty. And she had done virtually everything she had
been accused of. It was just a matter of interpretation. She was
proud of all she had done, and felt that it was exactly what the
American people wanted her to do. The people who were in power now
thought she was a criminal, her actions evil.

The judge -- a male wastrel no doubt, totally
unfit to sit in judgment of a decent woman -- was at the sentence
portion of the trial.

"Will the defendant please stand?" the
bailiff said.

She rose to her feet. She would accept the
judge's decision with dignity, the better to demonstrate its
cruelty and wrongness in the months and years ahead. They had
beaten her on this round, but she would see that it cost them so
much that a defeat would have been preferable.

"Eileen MacCammon, the jury of this the
federal court of Washington, D.C. has found you guilty on all
counts," said the judge, peering down at her from his position of
authority -- how these men loved their games! This was really the
easy part of this trial, as the facts were never in dispute, only
how they were to be interpreted.

"It has been very clear that you do not
consider yourself to have committed any crimes, that you never
considered any of your actions censurable in any way. But it has
also been very clear that you treated those with whom you disagreed
in ways that were extralegal in nature. That you subverted the rule
of law in your zeal to stamp out ideas and attitudes you disagreed
with. That you ultimately violated the very laws you swore to
uphold, willfully and intentionally, so great was your pride and
arrogance.

"I have thought long and hard about the
proper sentence for your crimes," said the judge, giving her the
full benefit of his arrogant male gaze. "Your crimes arise from
your total disregard of the rights of others, which you believed
were superseded by your moral imperatives. You destroyed the lives
of men and women, their husbands, lovers and children, in your
fanatical desire to weed out those who did not attain your
standards of moral purity, standards which turned out to be so high
that almost everyone eventually became fodder for your witch
hunts."

Fodder for witch hunts, ha! She had only
imprisoned a measly few tens of millions of people, most of them
men, the rest women who had strayed from God and become tools of
the Satan and his evil Patriarchy, as her sisters in the Church of
Jesus Christ the Purifier had maintained. She knew what the judge
meant. But she had only been following the best course for
everyone. So many of her supposed supporters had turned out to be
weak. They told her that she could safely prosecute internet site
owners, producers and actors, as well as publishers and bookstore
owners, as much as she wanted. But that arresting their customers
was playing into the hands of her opponents.

Sure, some said it was a carefully
orchestrated publicity campaign consisting of lies that made a tiny
minority of rapists and batterers seem to be an overwhelming tide
of crime. But she knew differently. She knew that all men were
rapists and batterers at heart. A few had learned to hide it, and a
tiny minority had been able to subjugate the beasts in themselves
and become useful, but the male lust still lurked even within them.
Even the best of them would sometimes look at you with a male gaze
-- the male gaze of Satan himself!

Even if she had still had it, not all the
money of the wealthy oligarchs who had funded her Purity Party
branch of the Democratic Party's elections could save her from
people who were in essence voting to keep themselves out of jail.
Plus of course, many of them were either on the brink of starvation
or already there, being lazy and useless human beings. (They said
the problem was automation, but she was sure they were just blaming
machines for their failings.) Her advisers had warned her about the
economy, too. And sure enough, starving, frightened, angry voters
went for the despised Progressive Freedom Party branch candidates
for some reason, despite all the lovely advertising her remaining
wealthy PAC contributors had bought for her and her friends.

"Therefore, I have decided to sentence you to
lose all your rights in this society, except for those few that are
necessary to keep you alive, for a period of not less than five
years and not more than ten years. You do not have a right to the
pursuit of happiness, so far as we are concerned, though you retain
your right to life and to liberty. But we interpret those rights
very narrowly in your case. No one may kill you, but you can be
endangered. No one may maim you, but they can alter you
cosmetically. You do not have any property rights, nor any right to
Basic Income. No one may permanently enslave you, but you can be
temporarily detained."

"No one owes you pay for your labor, shelter
from storms, or anything of that nature. The management of any
store may decline to serve you, simply because you are you. Hotels
may refuse you on the same grounds. You may labor for anyone, but
wages are not due you. You will not be imprisoned, but you are
entitled only that freedom which your friends may grant you. No one
owes it to you. We as a society are done with you. Go now, and good
riddance. But do not leave the U.S. You do not have freedom to
travel."

Those supporters who remained embraced her,
and they walked out of the court in triumph, though some in her
crowd did not look at all happy, but she did not notice that in the
glow of triumph, enjoying the way her persecutors glowered in
frustrated fury at such a light sentence.

Except for a few, who exchanged glances and
watched her thoughtfully. But she did not see them.

Three weeks later, she was snatched.

It happened in the dead of night. She was in
the safe house created by her friends in the Feminist Church of
Decency. After the trial, her lawyers had quickly hustled her off
to a hidden ranch house surrounded by armed believers. Then they'd
told her in horrifying detail what the judge's verdict meant.

She was legally any fiend's preferred victim,
because she could recover civil or legal damages only for the very
narrow range of things the judge had spelled out.

"The judge put a big, stinking target on your
back, Eileen," said her lawyer Naomi. "His sentence only seems
light if you don't understand its implications. Sure, the law isn't
going to do anything bad to you -- but it isn't going to respond if
anyone ELSE does something bad to you. You have no legal rights.
You're a slave in every respect, except that you have no owner.
Whoever has possession of you physically can do just about anything
to you. The judge said you couldn't LEGALLY be enslaved, but he did
say you could be detained. Which means that you can be enslaved in
every respect but formally. You are in grave danger, Eileen, and
I'm afraid we're going to have to protect you around the clock
until our appeal goes through."

Naomi was certain the Supreme Court would
overturn her sentence, if not the verdict itself.

And so MacCammon's friends played a shell
game, sent her around the country via different cars at different
times, living in different houses, until she wound up in an adobe
house on the outskirts of Taos, New Mexico. It was a very nice
place in the evening and the morning when the cool night air still
lingered. But the days were scorching.

Her supporters in the Church were very
careful to protect her, very solicitous of her comfort and safety.
The younger ones regarded her as something of a martyr, crucified
in the courts for trying to bring freedom from fear to
womynkind.

The older ones tended to take a more balanced
view. Some, she knew, blamed her for the political debacle they had
been through. She had Gone Too Far they felt. All had friends and
some few had relatives who were in prison because of it. There were
some heated feelings even among her supporters.

One day she sat on the porch with Naomi.

"What do you think would happen if I walked
down the road into town?" she asked Naomi.

"Nothing much, for awhile," said Naomi. "But
even in farm clothes you'd be recognized eventually, because
everyone knows what you look like. A burqa would work for you, but
burqas are not popular any more, even in cities the sisters do not
wear them. Even I can't go into town, for fear of giving our
location away, and I'm not nearly as well known as you are. If you
were to walk down that road, eventually a car, or more likely a
van, would pull up alongside you. Men would jump out of it and grab
you and drag you inside. Inside the car, you'd probably be beaten
at least a little -- more probably, you'd be beaten a lot. They
probably wouldn't use a gun or a knife on you because they might
kill you, and that's one of the few things it's still illegal to do
to you. If they wanted to hurt you, they would take you to an
isolated spot, haul you out, maybe beat you, maybe rape you,
probably both, or maybe just take all of your clothes off and drive
away, leaving you naked and alone.