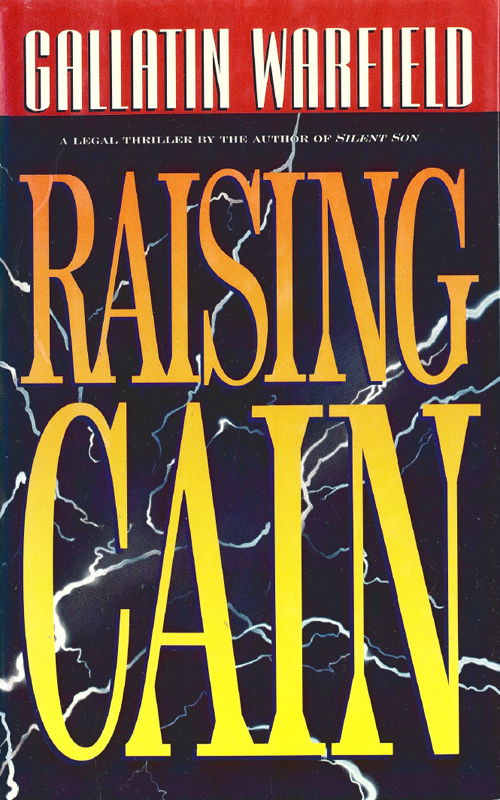 Gallatin Warfield stunned readers and critics alike with his debut thrillers, State v. Justice and Silent Son. Now, against a vivid backdrop of the modern American culture, Warfield unleashes a powerhouse legal thriller that explores the depths of human passion, loyalty, and deception…

On a deserted road in rural Maryland a black man lies dead, the victim of an apparent heart attack. His policeman son, Sergeant Joe Brown, refuses to see it as an open-and-shut case and begins to investigate. The trail leads to CAIN, the Church of the Ark, Incorporated, a fanatical religious cult practicing bizarre snake rituals and mind control, and to the group’s powerful, charismatic leader. Then, in an extraordinary twist of fate, Thomas Ruth, the head of CAIN, becomes the next to die.

The county’s prosecuting attorney, Gardner Lawson, is convinced that even though Brown had the motive, means, and opportunity to kill Thomas Ruth, he didn’t commit the crime. Then, when the cop is charged with the murder, the lawyer makes a decision that will change his life. In a stunning reversal of roles, Lawson’s old nemesis, the arrogant, flamboyant defense attorney Kent King, is brought in to spearhead the prosecution of Sergeant Brown—and Lawson must choose between a career built on bringing criminals to justice and a colleague in need of the best possible defense.

RAISING CAIN
takes us into the inner workings of our criminal justice system and the hothouse atmosphere of friends, adversaries, lovers, and family caught up in a struggle of life and death. In it, Gallatin Warfield explores some of the most compelling issues of our time—from the racial, social, and economic crosscurrents of Maryland’s Appalachian hill country to the dangerous passions that surround a cult. Relentlessly gripping, explosively original,
RAISING CAIN
pits an innocent man against a system that may not be able to do its job anymore, and a career prosecutor against the ultimate challenge: a search for the truth. 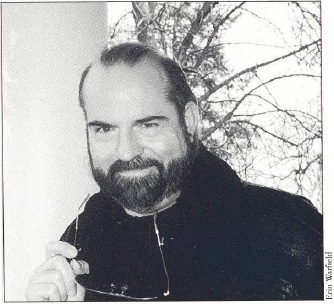 G
ALLATIN
W
ARFIELD
is the author of
State v. Justice and Silent Son.
He is a former Assistant Attorney General in the criminal division of the Maryland Attorney General’s office and former chief felony prosecutor in Howard County, Maryland.

For Erin and A.G.

Always aim for the stars

This book is a work of fiction. Names, characters, places, and incidents either are the product of the author’s imagination
or are used fictitiously. Any resemblance to actual events, locales, or persons, living or dead, is coincidental.

Praise for the novels of GALLATIN WARFIELD

Many thanks to Artie Pine, my agent, Larry Kirshbaum, president and CEO of Warner Books, and Susan Suffes, Warner senior editor,
for their patience, perseverance, and expert guidance in the production of this book. I am forever grateful.

The country road had no name. Originally cut by loggers to access the Appalachian forest, it was now just a dirt path through
the trees. Cracks and ruts scarred the surface, and sticker bushes clawed the sides. And it was two lonely miles long.

The old man’s feet hurt. He had walked halfway and was beginning to tire. Maybe he had made a mistake. Maybe he should not
have come this way tonight, attempting the shortcut in the September twilight.

The air was still, the birds silent. The only sound was the man’s labored breathing and the scrape of his shoes against the
gravel.

This was Tuesday, checkers day at the senior center. He’d spent the afternæn as usual, working the boards with the guys and
enthralling them with stories, tales from his thirty years at the service of Eastern Atlantic Railroad. He’d whooped it up,
and won some games. But the last one was over at four-thirty, and then he’d slipped up the road for a few minutes. And now
it was almost dark.

His steps quickened, despite his fatigue. Althea was waiting at home with a plate of greens and boiled ham. She was probably
worried and a little angry.

Joseph checked his gold watch and tried to keep up the pace, but the lumpy ground made it difficult. Suddenly there was a
loud crack in the underbrush. He stopped and peered into the thicket, looking for movement. Maybe it was a deer; they often
ran these woods. But he saw nothing, no gentle brown eyes gazing back. The silence returned. He started walking again.

After a few more steps there was another snapping sound in the brush. This time Joseph did not stop. Dinner was waiting. He
had to get home.

Suddenly a dark form moved from the woods and blocked his path.

The light had almost yielded to night, but there was still enough of an afterglow for the old man to discern what confronted
him. It was a crimson ghost in a satin robe and hood. His face was covered, but his eyes glared through holes in the cloth.

“What do you want?” Joseph asked shakily. This was not supposed to happen anymore, not today. The Klan had died out around
here. Black folks could come and go in peace.

The ghost moved closer but said nothing.

“What you want?” Joseph took a shaky step backward.

“We don’t need any of this…” Joseph stuttered, “this foolishness.

… Leave me alone!” He considered running but decided against it.

He wouldn’t get far, not in these woods.

The ghost lifted a canvas bag in a latex-gloved hand and seized Joseph’s wrist with his other. That, too, was gloved, and
it felt cold against his dark skin.

The hand gripped tightly and led Joseph to a tree off the pathway.

“Don’t,” Joseph said, trying to squirm out of the grasp. He was beginning to sweat, and his heart was pounding.

His arms were forced around the tree, and his wrists were wrapped in a thick piece of cloth. Then the wrists were bound together
with a cord.

“Awww…” Joseph moaned. “Why you doin’ this to me?” He thought of Althea and his greens steaming on the table. He should have
gone right home after checkers, the way he was supposed to.

Joseph twisted his neck, trying to see. “Don’t!” he yelled, straining to look. What was happening?

The ghost stood behind him, and Joseph pulled and yanked against the cord, but it was too tight. He couldn’t turn, and he
couldn’t see. “Please!” he begged. “Stop this!… Please!”

The ghost rustled the bag close behind, and Joseph stopped struggling and held his breath. What was happening now? Suddenly
he felt something move against his neck. It was scaly and muscular, encircling his throat like a writhing rope.

“Nooooo!” Joseph screamed in panic. The one unreasoning terror in Joseph’s life had a forked tongue. It was an absolute, incurable
phobia. He
hated
snakes.

“Uhhhh!” Joseph twisted his head wildly, trying to throw the reptile off, but the ghost had looped the snake so it would stay
in place.

“Get it off!” Joseph hollered, “Get it off! Please!” The snake’s belly muscles contracted.

The ghost was impassive as the struggle continued.

Joseph was gasping now, and his chest was tightening. “Uhhh…”

He’d only touched one snake in his life, and it had almost killed him. A buddy had put it in his car as a joke. It brushed
his leg while he was driving, and he’d panicked and almost crashed. He’d abandoned the car on the side of the road and never
returned.

“Get it…” Joseph moaned. He could hardly breathe now, and his chest was burning. Grandma had warned that a snake would take
him if he didn’t behave. And so he was a good boy, very, very good. But that didn’t stop the nightmares, the sweaty dreams
of slithering hell.

The snake finally slipped to the ground, and Joseph let out a gurgling gasp. But the ghost picked it up and put it back in
place.

Joseph tried to struggle, but his strength was gone. He had been bad and Grandma had put him in the shed. And now the snake
was here to take him away.

Finally, Joseph groaned and slumped against the tree. The ghost moved forward, cut the cord and removed the material from
his wrists, then lowered his body to the dry earth. The snake was still entwined around his neck. He snatched it below the
head and flung it into the underbrush.

Joseph’s eyes were rolled back, and he was breathing in trembling gasps. The ghost raised his hood and bent down to check
for a pulse. The old heart was barely beating.

He dragged the body back to the road and obliterated the dragmarks with a tree limb. Then he knelt and examined his victim
again. Joseph was struggling for life, his chest shaking with each breath. Consciousness flickered, and Joseph blinked, trying
to focus. His chest ached and his voice was gone, but he was awake. He moaned.

The ghost froze. Maybe he was reviving. Joseph moaned again and arched his back. The ghost looked into his face.

“Rrrrrrr…” Joseph cried out, his eyes wide. He was trying to speak, but the words wouldn’t form.

The ghost pulled away and jerked his hood down.

Joseph’s lips soon went slack, and he closed his eyes. His chest stopped heaving, and he let out a long, slow breath.

The ghost peered at him through the eyeholes in the hood, waiting for something to happen.

The body lay quiet now. The ghost checked his pulse. The old heart was finally still.

The ghost scanned the area a last time and smoothed the dust. Then he dashed into the forest and was lost in the night.

State’s Attorney Gardner Lawson stared at the handgun on the table. He was alone in a cubicle at police headquarters. It was
six
P.M.
, and the detective bureau was deserted. He picked up the pistol and rotated its cylinder, listening to the
click-click-click
as the feeder port passed the barrel. It was empty now, but last night there had been five .357 magnum rounds in those holes,
and a young farmer named Tom Payson had fired two into his wife, two into his son, and one into his own brain. Three people
dead, just like that, all because the August drought had wiped out the corn crop, or some other silent demon had seized Tom
and thrown him over the edge.

Gardner put down the weapon and lifted the cover of a police report. “MURDER-SUICIDE. CASE CLOSED,” the bottom line read.
It had been signed by the investigating officer and the chief. There was a space below that for the endorsement of the State’s
Attorney. Gardner removed a pen from his jacket and slowly wrote his name. Then he snapped the cover shut and shoved the folder
under the gun.