Read A Dash of Magic: A Bliss Novel Online

A Dash of Magic: A Bliss Novel 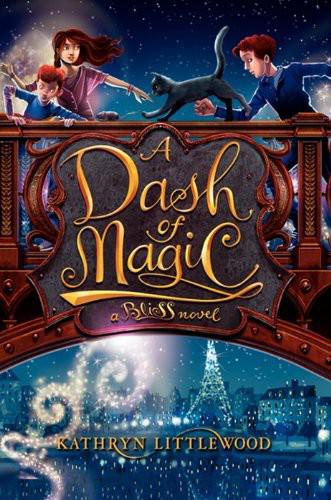 For my beloved Grampy,
a craftsman of the highest order

Chapter 1: The Challenge Will Be Televised

Chapter 2: A Cat of Many Words

Chapter 3: Enter the Master of Ceremonies

Chapter 5: Quiet as a Mouse

Chapter 10: Head in the Clouds

Chapter 16: Tears from a Rose

Chapter 18: The Cat Who Kicked the Hornet’s Nest

I
t was nine months after her aunt Lily stole the Bliss Cookery Booke right out from under her nose that Rosemary Bliss discovered something horrible on the shelves of Ralph’s Super Mart in downtown Calamity Falls.

Rose’s sneakers squeaked on the floor as she stopped dead in her tracks.

Staring back at her from the front of each of dozens of cardboard boxes was the smiling face of her lying, conniving aunt. Each box bore a banner reading
LILY’S MAGIC INGREDIENT! AS SEEN ON TV.

The economy-sized tub of mayonnaise Rose had been carrying slipped from her fingers and fell to its death on the floor. “Mom!” she cried.

“No, Mom, not the mayonnaise. Look!” Rose pointed at the boxes of Lily’s Magic Ingredient.

Since she’d disappeared with the Bliss family’s magical Cookery Booke, Aunt Lily had made good on her promise to use it to become famous. She had written a bestselling cookbook,
Lily’s 30-Minute Magic
, and had a cooking show on TV. Now there she was, smiling happily on the shelves of their very own super mart, while the rest of Calamity Falls had fallen into a grim malaise.

Without the Booke, Purdy and Albert Bliss had no choice but to make ordinary pies and muffins and croissants from the pages of an ordinary Betty Crocker cookbook. The baked goods were still delicious, of course, and the residents of Calamity Falls still came by every morning as they always had; but the magic of the town had dried out, leaving everything and everyone in it feeling a bit like warm lettuce: sickly, gray, and wilted.

In the picture on the box, Lily looked as beautiful as ever. She had grown out her close-cropped hair, and now it fell to her shoulders in perfectly wavy heaps the color of black chocolate. She was smiling seductively, her hands covered with orange oven mitts and planted on her hips. “Add a tablespoon to any of
Lily’s 30-Minute Magic
recipes,” the box read, “for a dash of
magic
!”

“Listen to this!” cried Purdy, reading from the box. “‘Not a sufficient source of Iron or Vitamin C. Ingredients: Secret. FDA approval pending.’”

“Why would anyone eat anything that hadn’t been approved by the FDA?” Rose asked.

“Lily is a celebrity,” Purdy said, brushing her wild bangs from her eyes. “People see her face, and they plunk down a credit card. Plus, look at the size of this fine print.”

“What do we do, Mom?” Rose whispered, the hairs on the back of her neck standing as straight as soldiers. Rose already felt guilty enough knowing that the biggest mistake of her young life—trusting her treacherous aunt Lily—had brought calamity to Calamity Falls. The thought that the calamity had spread to the rest of the world was just too much guilt to bear.

“What we do is figure out exactly what this ‘magic ingredient’ is,” Purdy said, rolling up the sleeves of her tattered blue coat. She swept box after box into her red plastic shopping cart until the shelf was empty.

Rose and her mother spent the rest of the weekend baking all of the recipes from
Lily’s 30-Minute Magic
and adding a dash of Lily’s Magic Ingredient to each one.

When Rose tossed a tablespoon into the crust of Lily’s Caramel Apple Tarte Tatin, the crust rattled on the table, giggling “
Lily!
”

Rose’s brothers, Ty and Sage, walked through the kitchen on their way to play basketball in the driveway. “Did someone say ‘Lily’?” Ty asked. In the time since the Bliss Cookery Booke had been stolen, Ty had grown taller still. He gelled his red hair straight up in the front so that it looked like he was wearing a tiara two inches high, or a tiny, red-picket fence. He had treated himself to a bottle of cologne from the drugstore for his sixteenth birthday, and he smelled like a walking European discotheque.

“I thought we weren’t allowed to say her name!” Sage cried into his portable tape recorder. Rose’s younger brother had read that some stand-up comedians recorded themselves in normal conversation in case anything funny came out, and so he’d started recording every comment he uttered in case he later needed the material for a stand-up routine. Sage had grown taller as well, and his cheeks had grown proportionally puffier, as had the red curls atop his head.

“No one said her name,” Purdy replied.

“I was just telling Mom about my new friend, Tilly,” Rose said. “And my other friends Billy and Gilly . . . who live in Philly.”

Ty and Sage squinted suspiciously at their sister and their mother, then scooted outside.

“Are we overcooking them?” Rose asked.

“No!” her mother exclaimed, confused. “If anything, we’re undercooking them!”

By the time Rose and Purdy were finished, every surface of the Follow Your Bliss Bakery kitchen was covered with plates of cakes, cookies, pies, and puddings, each containing a tablespoon of Lily’s Magic Ingredient. The kitchen itself was filled with a subtle, acrid, sinister smell.

“How do we find out if they’re dangerous?” Rose asked.

Purdy brushed flour from the wild curls of her hair. “I don’t know,” she admitted. “Do we dare try them ourselves?”

As Rose pondered what to do with the potentially poisonous baked goods, Purdy clicked on the portable TV that the family kept atop the counter in case of emergencies.

Much to Rose’s dismay, Aunt Lily appeared on the screen, wearing a fitted black cocktail dress. They had happened to tune in to her cooking show. “Here it is, folks—the world’s best devil’s food cake!” Lily said. “And you know what that means: Time for the C-word!”

Rose changed the channel in disgust, then wiped the flour-ridden remote control on her jeans. A commercial popped on.

“Now for a limited time only, Lily’s Special Spatulas are only nineteen dollars and ninety-five cents! Order today and we’ll include a Bombastic Bundt Pan, absolutely free!”

Lily again. This time she was on the set of a talk show, wearing a different fitted black cocktail dress. “The secret to my success?” she said, coyly batting her eyelashes. “Why, my passion for baking, of course!”

“Turn on the news!” Purdy yelled, and Rose changed the channel yet again.

“In entertainment today,” said the newscaster, “a new record has been broken:
Lily’s 30-Minute Magic
has become the highest-rated daytime cooking show in the history of television broadcasting. Its ratings have actually exceeded the number of televisions in America, a statistic that continues to baffle authorities.”

Rose and Purdy were busy ogling the television screen when Leigh waddled into the kitchen. “I want lunch, Mommy.”

“Lunch is in a half an hour, Leigh.” Without looking down, Purdy reached a hand to tousle Leigh’s head. “I see you’ve had a haircut.” Since she’d turned four, Leigh had insisted on cutting her own hair. This resulted in a mop of shaggy black chunks of every conceivable length. “Why don’t you go get your bow, and I’ll tie up your hair.”

But she didn’t go far. Mesmerized by the Lily-a-thon on the TV, Rose and her mother didn’t notice as Leigh reached atop the counter and gobbled down the entirety of Lily’s foot-long Pound-for-Pound Cake.

Leigh sat on the ground for a minute, licked her fingers, then stood and cleared her throat.

“Wow, that’s tremendous!” she said in a voice far too deep and gravelly and sophisticated to be coming from such small lips. “That was just a tremendous pound cake. So sweet—but not cloyingly so; velvety, rich, moist. . . . Who is responsible for this confectionary delight?”

Rose and Purdy spun around and stared at the little girl, who, a moment before, had hardly known what a pound cake was, let alone the meaning of the word
cloyingly
.

Leigh looked up at the TV and saw Lily sitting on the set of the news show, her long, tanned legs crossed. “Of course! It’s Lily, of
Lily’s 30-Minute Magic
, hostess of the most highly-rated television program in American history! Lily, the doyenne of Danish, the priestess of parfait, the grande dame of graham crackers! It’s a shame that her charisma should be confined to the realm of baking—she should run for public office!” Leigh stopped a moment, savoring this new idea. “Yes! Lily should be the first female president of the United States! She’s the centaur of cinnamon buns! The sultan of—”

Purdy clapped a hand over Leigh’s mouth and looked at Rose in horror.

Leigh’s irises had widened so much that her pupils were an endless vortex of shimmering black.

Rose sank into the red-leather booth of the dining table, stunned. “If Lily gets people to eat this mix,” Rose said gravely, “she’ll have the country in the palm of her hand.” Rose pulled the worn fleece hood of her green sweatshirt over her eyes. Not only did Lily want fame, but now it seemed she wanted power, too.

Leigh broke loose from Purdy’s grip and marched toward the back door. “I’ll not be chained like chattel! I’m off to find Lily and tell her how magnificent she is in person!” She shut the back door behind her, leaving Rose and Purdy among the mess of pans and tainted baked goods, sweaty and covered with flour and splatters of yellow batter.

Stolen Pleasures by Gina Berriault
The Child Taker & Slow Burn by Conrad Jones
Witch Twins and the Ghost of Glenn Bly by Adele Griffin
Nelson: Britannia's God of War by Lambert, Andrew
Getting Back to Normal by Marilyn Levinson
Homecoming by Cooper West
Dancing On Air by Hurley-Moore, Nicole
The Chardon Chronicles: Season One -- The Harvest Festival by Kevin Kimmich
Threnody (Book 1) by Withrow, Kirk
Restraint (Xcite Romance) by Stein, Charlotte