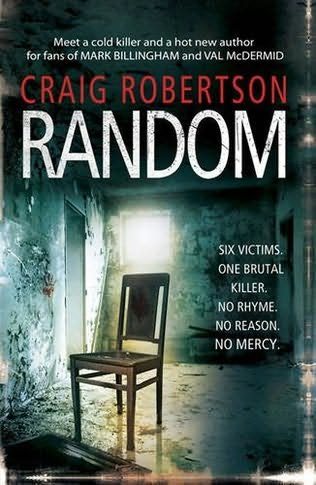 RANDOM
About the author

During his 20-year career with the
Sunday Post
in Glasgow, Craig Robertson has interviewed three recent Prime Ministers; attended major stories including 9/11, Dunblane, the Omagh bombing and the disappearance of Madeleine McCann; been pilloried on breakfast television, beaten Oprah Winfrey to a major scoop, been among the first to interview Susan Boyle, spent time on Death Row in the USA and dispensed polio drops in the backstreets of India. RANDOM is his first novel. 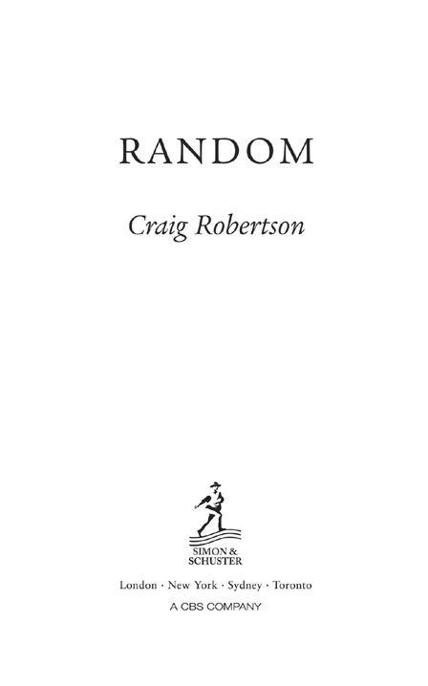 The right of Craig Robertson to be identified as the author of this work has been asserted by him in accordance with sections 77 and 78 of the Copyright, Designs and Patents Act, 1988.

A CIP catalogue for this book is available
from the British Library.

Printed and bound in Great Britain by
CPI Mackays, Chatham, Kent ME5 8TD

She was talking but I couldn’t take anything in. Her words bounced off me.

Would it be the loud guy with the fair, slicked-back hair? Part of me hoped it would. Maybe he was a regular. He’d need to have been there before if it was to be him.

She and I had only ever been once before, six months earlier, and never would again.

The loud guy would definitely be my choice if I had a choice to make. He had this grating, braying laugh that said listen to me. I looked at him over her shoulder, dodging the words that she threw at me. Let it be him. There was a smugness about him, a loud irritating brashness that rankled. I would gladly, happily, willingly make it him. It couldn’t be forced though.

Her words continued to rebound until I caught a few. Something about work. I let them bounce on.

The restaurant was busy with a lunchtime crowd, mainly business types. Any one of them would do just fine. Overstuffed suits and expense accounts, conceited wankers feeding at the corporate trough. Any of them would do. I considered eating slower, delaying the meal until some of the suits left before me so that there would be a chance that it could be one of them.

Maybe that fat guy spraying soup over anyone near him, talking with mouthfuls of bread and broth, splattering the air. He’d do. His shirt was stretched over his paunch and the wing of one collar stuck out of his jacket. He was a scruffy git in a good suit. He was a greedy bastard too, the way he’d wolfed down that soup and was now attacking more bread, tearing at it. He’d do just fine but it couldn’t be that way, not contrived. Anyway, his executive heart attack would do the job before long.

I caught some more of her words. She was moaning about the neighbours, the usual dance about their attitude. I switched off again. More rebounds.

There was a sleazy looking prick in a flash suit, staring into the eyes of the girl opposite. She was much younger and much better-looking but was hanging on every word that he dropped on her. He smiled at her like a fucking wolf and I just knew that he was already convinced he’d be boning her before long. And he was probably right. He’d probably fucked every secretary, office junior and brainless bimbo that he’d brought here, impressing his way into their knickers with his wallet and his well-practised lines. Oh he’d do. I wouldn’t, couldn’t force it but if it were him then that would do me. Chance would indeed be a fine thing.

I batted words back at her with nothing more than nods and shakes of the head, the odd yes and no. She didn’t need much from me to make what she thought was a conversation. Just as well. I could think of nothing but the possibilities. Anyone could have passed through that restaurant and left their mark. Anyone. Anyone that I’d never met. That was the beauty of it, the scope of the potential. A world of possibilities, well, a city at least. A city plus a world of visitors.

The tagliatelle arrived. There is something about it that interests me. Strands coming together and running in different directions. Something about the random nature of it. You can pick up any one end and just have no idea where the other end is, no idea which one will move.

I looked at my plate and set my sights on a single end of tagliatelle. I tried to follow it with my eye but lost it quickly. I tried to imagine where it might go, twisting and snaking around and under other strands. An arrabiata maze, a tagliatelle tangle.

Her words barely fazed me. She couldn’t lay a syllable on me. My concentration was total.

I had to find the other end of that strand.

I picked one out that looked a definite possibility. I caught the near end of the strand with my fork and pulled it. It slithered, it moved. It wasn’t the one I’d thought. I wasn’t happy.

There was an older man, maybe sixtyish, giving a waitress a hard time. She’d been too long with the bill for his liking. The miserable old bastard was making her apologize for the third time and you just knew her tip was gone. He’d do too. If he’d been before then maybe he’d be the one. That would do fine.

She had tiramisu after saying that she shouldn’t. It looked good.

I had an espresso.

The time was getting nearer and the anticipation grew. My heart raced, my mind wandered and wondered. An accountant? An estate agent would be fine. Perhaps a salesman. Butcher, baker, candlestick maker. Whatever.

She was on the last crumbs of dessert. I would soon know.

A final few words deflected off my shield and I called for the bill. The poor girl who had been bullied by the old guy brought it over and I gave her my warmest smile. We weren’t all bad.

I paid, cash obviously, and left a tip. Not too big, not too small.

At the desk at the door were two glass bowls. One held mints, the other business cards. A small paper sign sat beside the cards.
Leave your business card here for a chance to win a free meal for two in our monthly draw
.

What were the chances of that? I wondered. Anyway, I hated tautology.

I put my left hand into the mints and took two out. I reached into the business cards with my right hand. I didn’t leave a card. I delved deep into them and took one out.

Perfect. It wouldn’t have mattered who he was or what he did. But it was perfect.

He waved his hands around theatrically as he spoke, seeking attention, drawing glances. The fat man that was with him stroked his ego and laughed with him.

I watched him in the mirror if I looked at him at all. Reflected on him. I listened.

He laughed about clients he had overcharged. He sneered about the idiots he represented. He talked about the girl behind the bar and what he’d do to her. He boasted about a redhead named Amanda and what she’d done to him.

By then I knew his wife was named Rebecca and was blonde. They had no children. I knew a lot about him.

His secretary was Pippa. He drove an Audi TT and a Range Rover. The plaques on the intercom told me that his neighbours were Morrison, Kemper/Astle, Wightman and Moore.

He drank either champagne or imported beer. He liked tapas. He always ignored
Big Issue
sellers. He said ‘cool’ a lot. One night a week he went to a lap-dancing club in the Merchant City called Hot Legs. Twice I saw him go into a massage parlour near St Enoch’s.

Lunchtime usually meant here, the Corinthian. Evenings meant Tiger Tiger. Nights meant home to the trendy flat on the Clyde. It all meant very little to me.

All style no substance, that was Jonathan Carr. Expensive pinstripe suit. Spectacles that I took to be ‘designer’. Shoes that were too young for him. His hair was tinted and gelled. Carr was late thirties trying to be early twenties. I didn’t like him.

I’d followed him. To the Corinthian or from it. From his office to Tiger Tiger. From Glassford Street to the Clyde at Scotstoun.

He seemed at home in the Corinthian, sunning himself in the vast main bar, puffing up his ego under that ridiculously ornate domed ceiling and the elaborate cornices of seraphim and cherubim.

The Corinthian annoyed me. It was a bank until the late 1920s when it became the city’s high court for nearly seventy years until it was then turned into this monument to bad taste. It is debatable at which time it was more criminal. It was a magnificent Victorian building but it had been plastered with so much gold leaf and crystal that it reminded me of an old whore with far too much make-up. It tried for plush refinement and it managed classy brothel.

Carr and the fat man he was with, the man he called Alastair, were fitting clients. It flattered them to be somewhere so cheap and yet so expensive. The cost of the drink was intended to keep the riff-raff at bay. They were drinking champagne at £60 a bottle. It was Glasgow and it was lunchtime. Drinking champagne was ridiculous.

A young woman walked past and Carr fixed his eyes on her bottom. He raised his eyebrows and licked his lips. Alastair laughed and leered with him. I loathed them.

They finished. Good, we could go. I was out of place here and I didn’t like that.

Carr made a show of holding the champagne bottle upside down to check it was empty then slipped a fiver under it to leave as a tip. He slapped Alastair noisily on the back and they made for the door.

I didn’t turn to see them leave but finished my beer and gave them a head start. I knew where they were going.

I caught sight of them again walking down Ingram Street, maybe sixty yards in front of me, in a direct line to the Duke of Wellington with the traffic cone on his head. I wouldn’t get too close. Not yet.

CCTV cameras. They were everywhere. On me now for sure. On Carr. On Alastair. Following every step, every twitch of the head, every thought. The cameras made life difficult but not impossible. There was always a way.

At the Gallery of Modern Art they separated. Alastair waddling towards Queen Street, Carr going on towards Buchanan Street. I stayed with Carr, crowds between us, protecting him, protecting me.

He had a swagger that was ridiculous on a man that was just five foot five. It was a strut. He swayed along Buchanan Street as if he owned it.

He turned onto Bath Street and made for his offices. It was 2.30. I watched him spring up the stairs to number 1024 and disappear behind mahogany doors. That would be him for the afternoon and I’d return at 4.30 and sit in the cafe across the road. It was Wednesday and he would most probably leave sharp and head for Milngavie. Milngavie was where the redhead lived.