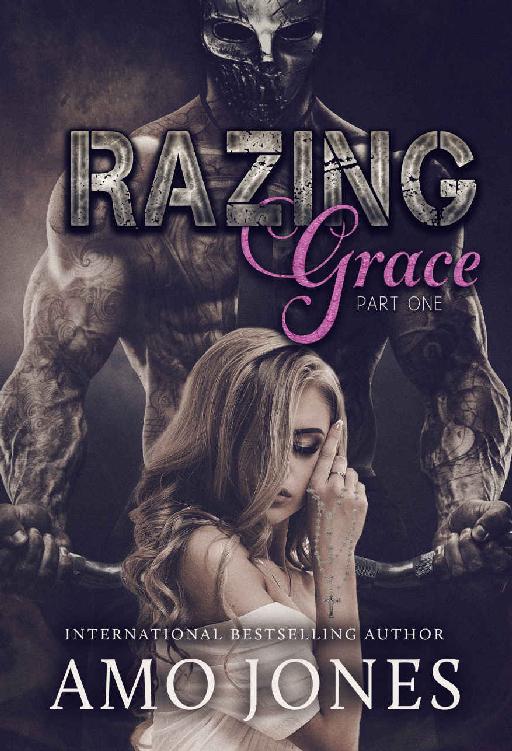 This book is a work of fiction. Names and characters are the product of the author’s imagination and any resemblance to actual persons, living or dead is entirely coincidental.

This eBook is licensed for your personal enjoyment only. This eBook may not be re-sold or given away to other people. If you would like to share this eBook with another person, please purchase an additional copy for each recipient. If you’re reading this eBook and did not purchase it, or it was not purchased for your use only, then please purchase your own copy. Thank you for respecting the hard work of this author.

Note: This story is not suitable for persons under the age of 18.

*Potential triggers lie within this book.

**If the word “fuck” offends you, please don’t read this book.

Cover by
Kari Ayasha from
Cover to Cover Designs

Interior graphics and formatting by
Max Henry from
Max Effect

This book is dedicated to all the crazy girls.

The girls who weren’t born crazy, but the world is a fucked up place.

Only the strong survive.

And the ones who survive?

They’re the girls who are crazy enough to know they can.

The heavy bumps of the gravel road bounce me up and down in the back seat of the dark SUV I’ve been thrown into. My silent sobs wrack through my body while I silently pray that whoever these people are, they at least kill me fast. I rub the tears off my swollen cheeks and bring my eyes up to everyone who is sitting in the back with me. Every single person’s face, including the driver’s, is covered by a steel ghost mask. They’re all in different colors with different markings but they’re all steel. I swallow past the bile coming up my throat and bring my eyes to the rearview mirror where the driver’s mask is silver with a chunk near his mouth slashed off slightly but not in a manner that could give away any of his facial features. When his eyes move off the road and meet mine in the rearview mirror, chills seep into my veins. His dark grey eyes glare right into me. It’s like looking into the eyes of a corpse.

My face pales. “What do you want with me?”

His eyes come back to the mirror. “You’ll know what we want you to know.”

One of the other men in the back with me, wearing a mask that’s dipped in red with a single white stripe going down the middle, cuts off my vision by tying a rag around my eyes. He takes hold of my wrist when the SUV comes to a halt. “Mmmm,” red mask growls into my ear. “Just when I thought you couldn’t get any hotter, I put this baby on you.” He tugs at the blindfold around my head. His voice is low, filled with malice and oozing with death.

My jaw sets with my arms handcuffed behind my back. The truck door opens and someone pushes me out the door. I trip, stumbling forward until my chest and forehead connect with the hard concrete ground. My sobs start again as the burning graze I gained on my head begins to sting with fire.

“Stop,” a deep commanding voice says. “Kurr doesn’t want us to fuck with her. He wants his toy pretty.”

Hands go around my arm as the blindfold is ripped off my eyes.

I squint, the now-morning sun rising over the masses of trees until I can see the body that stands in front of me. He is massive—the same silver mask I recognize from the driver with the same eyes glaring down at me. I can’t tell how old he is, but there’s no sign of aging from what I can see, which isn’t much. His eyes narrow, the dark rings glaring right through me like a dark light saber slicing through the halo of light. I flinch.

“Ready to meet the dungeon?” he growls. I swallow, prying my eyes away from the man in front of me. “Come on.” He tugs my arm to hurry me up.

“What does he want with me? I’m just the sister of one of the girls who was seeing a guy in the motorcycle club!”

He stops, turning his body around, his chest pushing against mine until my back hits the SUV. His eyes narrow again, his hand coming up to my chin. One of his legs inches in between mine, spreading me open. His face comes down to my ear, the cold steel from the mask brushing over my cheek. I slam my eyes shut.

“Here we go. I was wondering when the games would start,” the guy who blindfolded me says excitedly.

“One, you don’t ask questions,” he growls before his other leg comes in between mine, spreading my legs further apart until his hardness is pressing against my stomach. “And two? I’ll do what the fuck I want with you.”

“You’re sick!” I splutter, my lip curling in disgust. “Is this…” I look around nervously. “Turning you on?”

His cock presses into me even more while he drags it over my stomach in one stroke. “Oh, you have no idea.” My eyebrows draw together as he continues to drag me forward. “Move.”

When I bring my head up to see what’s in front of me, my mouth drops to the ground. “What the F?”

In the crater of what looks like an old volcano sits one monstrous home with other little housing buildings scattered around it. There’s also a massive structure that is beside the home. There are men and women walking around the place casually, all wearing interesting attire.

I swallow, my eyes glazing over. “What is he going to do with me?”

The masked man turns toward me. “Who? Kurr?” The dark depths of his eyes twinkle with excitement. He drops his hoodie from his head until it sits casually around his neck. Tattoos cover the front of his neck. “He’s the least of your worries, pet.”

“Who’s my biggest?” I manage to choke out through my fear.

I chance a quick look at the five other men standing behind him when one turns around, displaying the back of his hoodie which reads, in white writing, “In man we trust”. I remember hearing Hella and Beast saying that that was The Army’s motto.

My blood drains from my face as prickling fear reverberates over my flesh and my breathing increases.

He stares right through me, his eyes piercing me with so much intensity, I almost squirm. I find time to wonder what he looks like without that mask on, though.

“Me,” he finally answers before taking my arm and tugging me forward. When he turns, I see tattooed numbers on the back of his neck similar to Beast and Hella’s, only this man’s numbers read “000”.

Dark shadows dance around the cold concrete walls as I shiver in the corner of the locked cell. It’s been hours since I was snatched from the warm enclosure of my sister’s car. I still don’t understand who or what took me. My once pearl white blouse now hangs loosely in a soiled mess, and my black slacks are stained with mud.

My body shakes, trembling in my skin as a pattern begins to form. First, a wave of fear washes over me, conjuring the reaper. Death is easy. Death is a means coming to an end, and you know the surges of pain that you feel whispering through your body is about to come to a merciful end, so you relish in that comfort. Just one more breath, you tell yourself as your eyes slowly close and a tingling sensation of defeat simmers inside of you. My breathing shallows as I inhale deep, slow breaths. Little colorful dots dance around behind my lids as I mentally take myself to somewhere warm. I think about hot chocolate on a cold winter night sitting by the blazing fire. Memories of Melissa and I cuddled by the fireplace on Christmas Eve with the scent of fresh pine dancing in the air. I smile, remembering how happy our family was before my father passed away. My head shakes from left to right, trying to fight off the memories of that fateful night. One nightmare at a time, Millie, I tell myself.

Double-Dare O’Toole by Constance C. Greene
The Worm Ouroboros by E. R. Eddison
Desperate Thoughts: The Gift by Ian Dalton
SWAY (Part 1) by Davis, Jennifer
Branded by Cindy Stark
The Black Robe (The Sword and the Spell) by Smith, Clare
The Eye of the Wolf by Sadie Vanderveen
The Lost Boy and The Gardener's Daughter by Todd, Ian
Pushing Up Daisies by Melanie Thompson
Blood Rock by Francis, Anthony