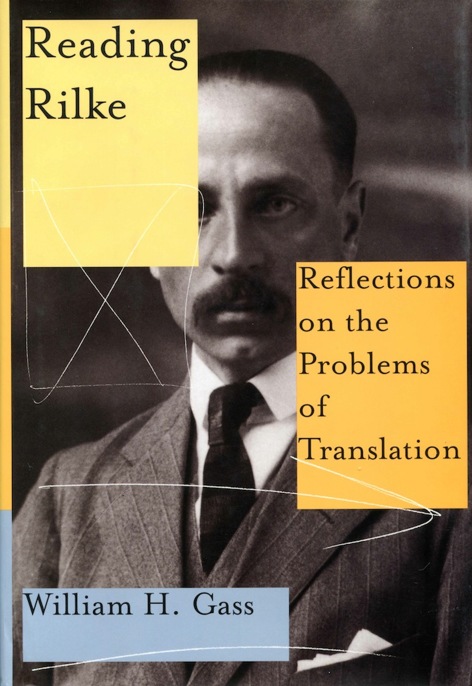 Fiction and the Figures of Life

The World Within the Word

The Habitations of the Word

THIS IS A BORZOI BOOK
PUBLISHED BY ALFRED A. KNOPF, INC.

Reading Rilke : reflections on the problems of translation / by William H. Gass.—1st ed.

THIS BOOK IS DEDICATED TO HEIDE ZIEGLER WITH LOVE AND GRATITUDE
.

Self-Portrait from the Year 1906

The distinction of an old, long-noble race

in the heavy arches of the eyebrows.

In the blue eyes, childhood’s anxious

yet feminine, as one who endures.

The mouth made as a mouth is, wide and straight,

not persuasive, yet not unwilling to speak out

if required. A not inferior forehead,

still most comfortable when bent, shading the self.

This, as a countenance, scarcely configured;

never, in either suffering or elation,

brought together for a real achievement;

yet as if, from far away, out of scattered things,

a serious and enduring work were being planned.

Poems Translated in the Text
Other Than the
Duino Elegies

Inhalation in a God

The Grace of Great Things

POEMS TRANSLATED IN THE TEXT
OTHER THAN THE
DUINO ELEGIES

The Bowl of Roses
Die Rosenschale

from
In Celebration of Myself
Mir zu Feier

A Youthful Portrait of My Father
Jugend-Bildnis meines Vaters

III. 6–7 of
The Book of Hours
Das Stundenbach

To Music
An die Musik

Put My Eyes Out, 11.7 of
The Book of Hours
Lösch mir die Augen

Tell Us, Poet, What Do You Do?
Oh sage, Dichter, was du tust?

The Death of the Poet
Der Tod des Dichters

Heide Ziegler, to whom this book is lovingly dedicated, spent much of her valuable time and energy discussing with me the meanings of the
Duino Elegies
, giving me valuable background information, advising me on strategies, correcting many of my mistakes (impossible to catch them all), and patiently reading and rereading my revisions. This book is half hers. No doubt the better half.

I am also indebted to all those who, before me, have tried to find their way through these difficult poems, and beaten a better path … a path from which, so often, I fear I have strayed.

The poet himself is as close to me as any human being has ever been; not because he has allowed himself—now a shade—at last to be loved; and not because I have been able to obey the stern command from his archaic torso of Apollo to change my life, nor because his person was always so admirable it had to be imitated; but because his work has taught me what real art
ought to be; how it can matter to a life through its lifetime; how commitment can course like blood through the body of your words until the writing stirs, rises, opens its eyes; and, finally, because his work allows me to measure what we call achievement: how tall his is, how small mine.

Open-eyed, Rainer Maria Rilke died in the arms of his doctor on December 29, 1926. The leukemia which killed him had been almost reluctantly diagnosed, and had struck like a storm, after a period of gathering clouds. Ulcerous sores appeared in his mouth, pain troubled his stomach and intestines, he slept a lot when his body let him, his spirit was weighed down by depression, while physically he became as thin and fluttery as a leaf. Since, according to the gloom that naturally descended on him, Rilke’s creative life was over, he undertook translations during his last months: of Valéry in particular—“Eupalinos,” “The Cemetery by the Sea”—and composed his epitaph, too, invoking the flower he so devotedly tended.

ROSE
,
O PURE CONTRADICTION
,
DESIRE
TO BE NO ONE’S SLEEP BENEATH SO MANY LIDS
.

The myth concerning the onset of his illness was, even among his myths, the most remarkable. To honor a visitor, the Egyptian beauty Nimet Eloui, Rilke gathered some roses from his garden. While doing so, he pricked his hand on a thorn. This small wound failed to heal, grew rapidly worse, soon his entire arm was swollen, and his other arm became affected as well. According to the preferred story, this was the way Rilke’s disease
announced itself, although Ralph Freedman, his judicious and most recent biographer, puts that melancholy event more than a year earlier.

Roses climb his life as if he were their trellis. Turn the clock back twenty-four years to 1900. Rilke is a guest at Worpswede, an artists’ colony near Bremen, and it is there he has made the acquaintance of the painter Paula Becker and his future wife, Clara Westhoff. One bright Sunday morning, in a romantic mood, Rilke brings his new friends a few flowers, and writes about the gesture in his diary:

I invented a new form of caress: placing a rose gently on a closed eye until its coolness can no longer be felt; only the gentle petal will continue to rest on the eyelid like sleep just before dawn.
1

The poet never forgets a metaphor. Nor do his friends forget the poet’s passions. Move on to 1907 now, when, in Capri, Rilke composes “The Bowl of Roses,” beginning this poem with an abrupt jumble of violent images:

bunch themselves into a ball of animosity

and roll across the ground

the careening tangle of bolting horses,

their upturned eyes and flashing teeth,

as if the skull were peeled back from the mouth.

Bullyboys, actors, tellers of tall tales, runaway horses—fright, force, and falsification—losing composure, pretending, revealing
pain and terror: these are compared to the bowl of roses. Rilke has come from Berlin, where his new publisher, Insel Verlag, has been distressed to discover that Rilke’s former publisher plans to bring out
The Book of Hours
as well as a revised
Cornet
. This does not get the new alliance off to a smooth and trusting start. Moreover, Rilke is broke again. During 1906, the poet had been bankrolled by his friend Karl von der Heydt, who twice generously deposited funds in Rilke’s Paris bank, but Rilke’s habit of staying in deluxe hotels and eating (modestly) in expensive restaurants, his dependence upon porters and maids and trains, had left him holding nothing more than his ticket to Alice Faehndrich’s Villa Discopoli on Capri. Von der Heydt sent him some supplementary funds eventually, but not before making a face. Perhaps these unpleasantries account for the poem’s oddly violent and discordant opening.

But now you know how to forget such things,

for now before you stands the bowl of roses,

with unattainable being and promise,