Ready To Burn (Due South Book 3) 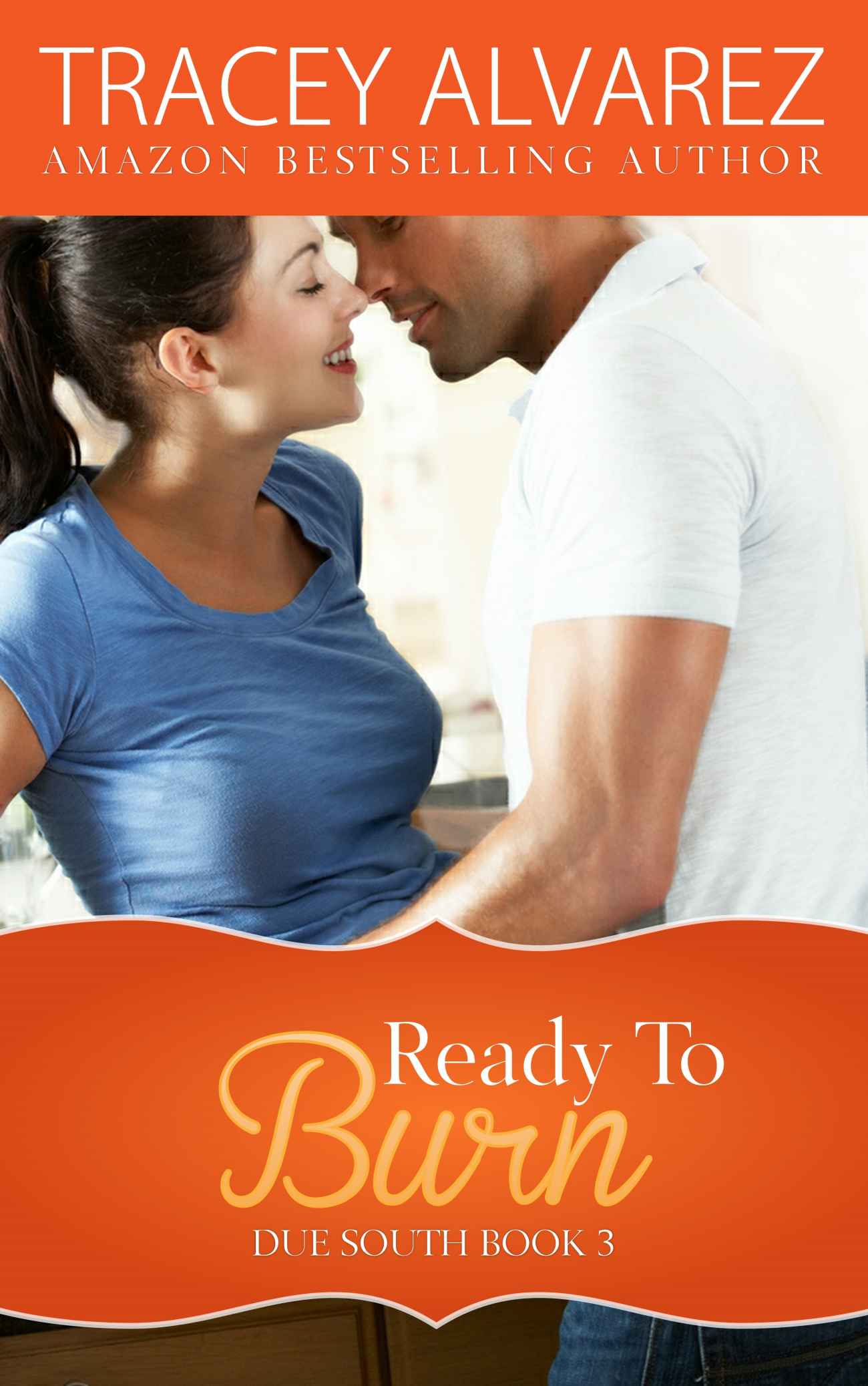 Ready To Burn (Due South Book 3)

All rights reserved. No part of this publication may be reproduced, distributed or transmitted in any form or by any means, including photocopying, recording, or other electronic or mechanical methods, without the prior written permission of the publisher, except in the case of brief quotations embodied in critical reviews and certain other noncommercial uses permitted by copyright law. For permission requests, write to the publisher, addressed “Attention: Permissions Coordinator,” at the address below.

Excerpt from Christmas With You

For my dad, who so faithfully cooked for my mum all those many years, and demonstrated to me how love can be shown in the simplest of ways.

Want to keep up-to-date with new releases, special subscriber only promotions and other news/cool stuff?

Cooking is like love, it should be entered into with abandon or not at all.

So…his life had come to this.

Del Westlake, sous chef at
Cosset
, one of the up-and-coming, hottest restaurants in LA, applying for a job flipping cartoon-shaped pancakes.

His mom always warned that the bigger a person’s ego, the bigger the crash when he hit rock bottom. And Del had hit rock bottom. No job, a messed-up reputation, rent overdue on his Venice Beach apartment, and about to grovel for a position as line cook from a man who’d probably grill him to charred ashes.

Del snorted. Seated on the hotel foyer’s armchair, he scanned the entrance to the character dining restaurant then checked his watch. His knee bounced uncontrollably. Fifteen minutes until the interview—an interview he’d only gotten because one of Cosset’s servers, Larry, was a drinking buddy of the restaurant manager. When a month had gone by and no other reputable LA restaurant would touch Del, Larry called in a favor.

Shrill giggles stabbed Del’s ears from across the foyer. Some guy in a giant dog costume hammed it up with kindergarten-aged twin girls. Del winced, but at least it wasn’t from the mother of all hangovers. This morning the pounding head and sweaty palms were only due to the depressing thought of how righteously he’d screwed up.

The phone in his dress pants pocket vibrated. He fished it out and glanced at the screen.
Mom…speak of the devil.

Could he ignore her? Nah, she’d keep trying until she reached him. Better to deal with her now.

He jabbed the
talk
button. “You’re up early, Mom—too much nasty fresh air down there?”

“Hello to you too, son. I assume you’re still on your morning break?”

Del’s knee jiggled again. He’d be on his morning break if he still had a
job
. Admitting his current unemployment status to Claire Gatlin would be the equivalent of waving an upside down crucifix at the Pope. And his mother had enough stress without knowing her youngest son’s career was in the toilet.

“I won’t keep you long, and I’ll get straight to the point. It’s your father.”

Del’s stomach plummeted like a freight elevator with its cables freshly cut. Mom had flown halfway around the world to New Zealand to look after her ex-husband after she’d found out his kidneys had packed up.

Was the old bastard dead?

Del surged to his feet and strode to a potted fern, tucking the phone closer to his ear. “What about him?”

What the hell else could he say? That he was glad the SOB who’d forced Del as a kid to go to LA with his mother still stubbornly clung to life?

“Shaye’s struggling with the workload now that Bill can barely put in any hours.”

Shaye’s name sent a ripple through his mind. Three years his junior, she’d been part of the gang of kids he hung out with in his hometown of Oban. But more than just being part of the gang, Shaye and her older siblings had accepted him and his brother, West, as part of the Harland family when theirs had broken down.

He stared at his shoes. Shaye had only been eleven when he’d left. A studious kid with stars in her eyes and a killer bowling arm when they’d played cricket on the island’s many beaches. She’d be nearly twenty-five now. Twenty-five was too inexperienced to run Due South’s restaurant solo.

Not his problem. He had more pressing matters to worry about. “You’ve advertised for another chef though?”

A sharp inhale from seven thousand miles away.

“Ahh…” He guessed the problem immediately. “Nobody wants to work at the ass end of New Zealand?”

“Sorry. I’m sure lots of people are dying to work in such a wild and beautiful jewel of the Pacific, yadda-yadda-yadda.” Del rolled his eyes over at the twins, who clung to the dog so fiercely it was a wonder the poor sucker beneath the fake fur could breathe.  “Mom, why are you calling?”

“Always so impatient. Can’t you hold a conversation without rushing?”

He had a scummy, beneath-him job to grovel for. “Now’s not a good time.”

“It never is.” She huffed out a sigh. “I want to ask you a favor. You-know-I’ve-never-asked-anything-of-you-before.”

Oh, shit. The Mom-Guilt favor. Nothing good ever came from those words.

“Bill refuses to let a stranger into his kitchen. Your brother posted an ad for a chef, but Bill pulled it. I heard him mutter something like, ‘Del should be here; it’s his bloody legacy.’”

Her meaning tumbled past his worries of how he’d get his career back on track, and knocked him on his ass. “Are you asking
me
to take over for Bill?”

“Well…yes. Yes, I am. Just until you can train Shaye up to speed or we can find a replacement. Ryan’s a wonderful manager; I’m sure you’ll both figure out what’s best for Due South.”

Ryan, who only answered to “West,” had taken over the running of Oban’s one and only hotel/pub/restaurant four years ago. West coped pretty well working alongside their father without cracking the old bastard over the head with a skillet. Del, however, would rather sauté his own nuts before stepping through Due South’s door again. He hadn’t been back to Stewart Island since he left thirteen years ago, and as far as he knew, hell hadn’t frozen over yet.

“You’ve always wanted to run your own restaurant.”

He tipped his head back and it
thunked
on the wall behind him. “Yeah. But in LA, not down there in the bowels of the earth.”

“Head chef is head chef. Your father’s right—Due South is your legacy.”

“He’s lying. Bill would rather gnaw off his own arm than let me touch his precious restaurant.”

Del angled his face toward the hotel windows. His reflection, dressed in a white shirt, his dried-mud brown hair perfectly combed and his usually scruffy jaw freshly shaven, glared back. On a good day he'd get a pretty girl’s number with minimal effort. Not today. Today, he felt like three-day-old leftovers that some first year culinary student tried to pass off as cuisine.

“That’s no longer the case, Del. He needs you.” Oceans of emotions surged through his mom’s voice, but he didn’t care to dip his toe in those waters.

“Does Bill know you’re ringing me? Does West?”

He imagined Bill would have something to say on the subject of his youngest son taking over his kitchen, kidney disease or no kidney disease. Not that it mattered. Del wasn’t that desperate.

Turning away from the window, he caught sight of the big dog posing for an obligatory photo. While the woman repositioned her camera for another shot, the dog pretended to nibble on one twin’s head. Her sister shrieked with mirth. Del shuddered.

“I have a job here—a good job.” He hunched a shoulder, waiting for God to smite him for lying to his mother.

“I know. I wouldn’t ask if there were any other way. You must have a bit of paid leave due—or couldn’t you take a vacation?”

A vacation? Who had time for a vacation when they were trying to get ahead in one of the most competitive, diabolically insane careers? Take a vacation and you may as well take off your fucking apron—permanently.

He flexed his fingers a few times and squeezed his eyes shut. Soft breaths puffed down the phone line, but his mom damn well knew silence worked best. Just as she knew there was very little Del wouldn’t do for her.

His eyes blinked open. A short ferret of a man with designer eyewear and dressed in an expensive suit, hurried across the tiled foyer toward him.

“Just think about it. Due South needs you. I need you. West needs you.” A brief pause, then she added, “And Bill needs you most of all.”

Didn’t need me thirteen years ago
. Del clenched his teeth until his molars ached. “I’ll think about it. Bye, Mom.”

He disconnected the call and shoved the phone back in his pocket.

Channeling his older brother’s infamous charm, Del stuck out his hand, donned a confident smile and prepared to eat a double helping of humble pie.

No one would ever guess the contents hidden inside the gold-stamped
Flirt
shopping bag. No one would believe what good-girl Shaye Harland had purchased from Invercargill’s exclusive lingerie boutique.

She hurried toward the Stewart Island ferry before it left on its last voyage for the day, grinning like a crazy woman. Picturing the shock on Piper’s face when she opened her hen night gift soothed Shaye’s twitchy stomach as she boarded. Her big sister would die—just fall out of her size nine combat boots after unwrapping Shaye’s carefully chosen selections.

After a quick thumbs up to one of the ferry’s pursers, Shaye scanned the backs of her fellow passengers at the boat’s rail. Three women and a tall, broad-shouldered man in a black wool pea-coat were on deck, facing the white-capped waves of Foveaux Strait. The often treacherous stretch of ocean separated the tiny town of Bluff on the mainland from Stewart Island. A cloud-covered haze hung in the distance. In a few weeks’ time, come the high season later in October, tourists would outnumber the handful of locals who normally used the ferry. Today, a Monday afternoon, the ferry would make the one-hour crossing at only a quarter capacity.

Shaye slipped inside the enclosed passenger lounge and patted the shoulder of Mr. Peterson, who’d opened the door for her.

“Wanted to thank you for the meal you dropped around last week, Miss Shaye,” he said. “That veggie casserole sure worked a treat. Better than the time Ben unblocked my kitchen drain.”

Not the kind of image a woman wanted in her head while holding a bag of sexy-fun-time lingerie. If Mr. Peterson caught a glimpse of her goodies the scandal would clean him out quicker than her big brother’s plumbing heroics. She hugged the bag tighter against her chest.