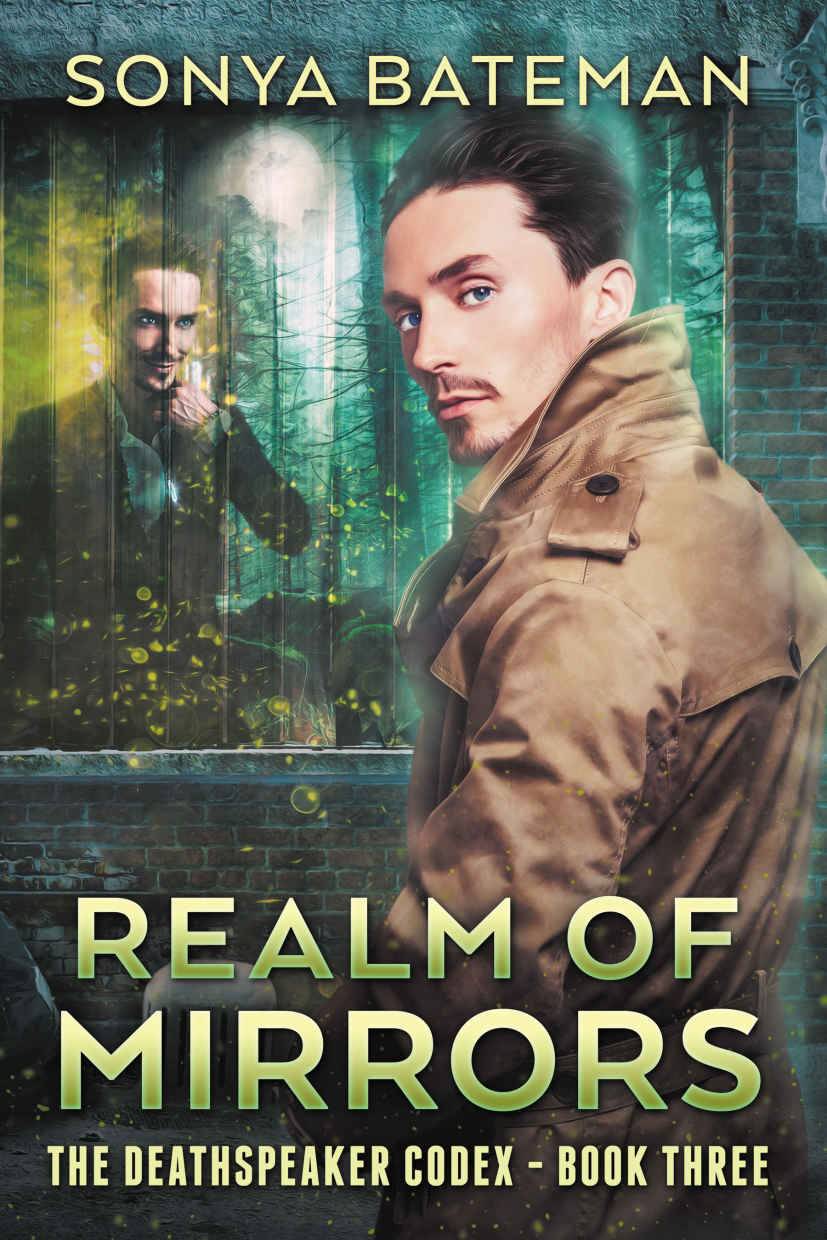 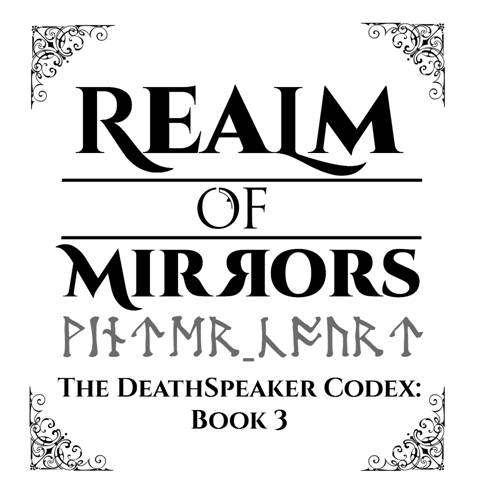 Thank you for picking up
Realm of Mirrors.
Please
join my mailing list
to find out about the latest new releases, book sales, and special subscriber-only offers.

This book is a work of fiction. Any resemblance to actual persons, living or dead, is entirely coincidental. Names, characters, businesses, organizations, places, events, and incidents are the products of the author’s imagination, or are used fictitiously.

RETURN OF THE HUNTERS

WRONG SIDE OF HELL

THE DEVIL WENT DOWN (A Shade and Citadel novella)

MASTER OF NONE
|
MASTER AND APPRENTICE

THE GETAWAY (A Gavyn Donatti novella)

H
e cringed at the sound of her tread on the dungeon steps, and despised himself for it.

For a fortnight she’d kept him down here, stripped of his power—and everything else. His clothing, his dignity. The Court’s sadistic
cáesdhe
had done their work well. If not for these chains, he’d no longer be on his feet.

But he would not yield.

She approached him slowly, and he could not help but tremble. Her beauty was undeniable, her power nearly boundless. Without his own magic, resisting her charms came at a painful price—and of course, she knew that.

It was a price he’d pay to keep his love safe.

“Oh, my. You seem so tired,
gallae.
” The mere sound of her voice tore at him. “Wouldn’t you like to rest?”

A sweet, false smile. “In hers, then? You’ve only to tell me where she is, and I’ll have her brought to you.”

Despite the promise of pain in those words, he said nothing.

“
Míilé lahn!
” She gestured fiercely at him. A hoarse cry escaped as a thousand phantom knives filled his body. “
Where is she?
”

He gasped again and spat blood. “Safe from you,” he panted. When he’d sensed the Unseelie Guard, his own men, coming for him, his son had agreed to take her to the one place the Queen could not reach her—across the Veil, to the human realm. He’d also given the master stone to his lieutenant, Levoran, who’d promised to keep it from her hands and deliver it to his blood when the time came.

If she’d not managed to destroy every trace of his lineage by then.

She moved closer, until he could feel the passing of her breath on his skin. “A human,” she murmured. “All this suffering, this humiliation…for a
human
. A disgusting, filthy insect.” Her eyes searched his, and in them was nothing but the coldness of the ages. “At least tell me why,” she said.

Drawing breath was difficult. “You’d not understand, Highness,” he grated. “You do not love.”

She backhanded him, hard enough to split his lip. “How dare you!” she roared. “I am the core of the storm, the blood of all hearts. The very essence of passion!”

“Aye, you’ve passion unmatched,” he whispered…and thought,
but not love
. She loved no one save herself.

“And yet you refuse me.” She grabbed his hair and forced his head up. “You’ll bed Seelie and Unseelie, noble and lowborn, all manner of Arcadian peoples. And even a human. A human over me, your Queen.”

“Highness…Moirehna, please.” He knew she’d not see, but he had to try. “I’ve sworn to protect you with my life. This I have done, for centuries,” he said. “But I cannot protect you from within the silk prison of your bed.”

“You’ll do as your Queen commands.” She released him roughly. “You will tell me where she is, and you will serve me as I desire. Or I will destroy you.”

He shuddered and straightened as best he could. “Kill me, then, because you’ll never have her. Or me.”

Her eyes flashed, and for a moment he was certain she would strike him dead. But then, she smiled. “Very well,
gallae
. You’ll have your life, and your filthy little pet. In fact, you’ll have all the humans you can desire,” she said. “You will be brought before the Winter Court, and banished from Arcadia. But first…you will suffer.”

As she spoke, four
cáesdhe
descended the steps.

Though his face was as expressionless as the Court torturers, misery filled his lieutenant’s eyes. Levoran would follow orders—and he was grateful for that, at least. Her threats to destroy him were empty, but she’d not hesitate to strike Levoran down.

She leaned toward him, her smile twisting on itself. “If you’d not sent your son to flee with the human whore, I’d have ordered him to do this. But your dear, trusted lieutenant will suffice.”

The Queen moved back, but she did not leave the dungeon. She stayed to watch.

She watched until he no longer had the strength to scream.

I
still hadn’t gotten used to the way people stared when we were out in public. Sadie and I could pass for normal, but Taeral—well, my brother kind of stood out. Even in Manhattan, land of the free and home of the weird. Nearly seven feet tall, with long black hair and a black duster over black clothes, and a silver metal arm longer than his normal one. The stares were worse in broad daylight.

At least Taeral didn’t mind being stared at. He just hated the humans right back.

“You’re certain this place is near,” he said as we turned the corner at Seventh and Twenty-Ninth.

I nodded. “Abe said they have a file on it. Apparently, it’s on the NYPD’s watch list.”

Eight years ago, The Grotto had been a run-of-the-mill, glass front tattoo shop sharing space with an occult bookstore on Forty-Second, between Ninth and Tenth. Now that space was a Starbucks. Four successive cab drivers and a search on Sadie’s phone failed to turn up a new address, so I’d called Abe. Who’d been reluctant to give me a location for a vaguely suspicious tattoo studio that no one seemed to know anything about.

I couldn’t blame him, really. I had my own suspicions, considering the owner of the shop in question had given me magic tattoos that I didn’t know were magic until very recently. And then I found out the guy was some kind of rogue Seelie prince.

Being half Unseelie, I’d been forced to assume whatever magic they contained wasn’t supposed to help me—since apparently the Seelie and Unseelie had a long tradition of trying to kill each other at every opportunity. Still, I’d had them eight years now, and the tattoos didn’t seem to do much except glow.

Taeral was a lot more worried than me. And a lot more pissed—but he usually was. Angry was his baseline emotional state.

“All right,” I said as we walked. “Tell me why we’re doing this now, instead of taking a little time to recover from…oh, I don’t know, fighting a pack of werewolves and a shitload of soldiers with super-weapons?”

We’d only been back in New York for a few days, after we’d helped Sadie save her family from Milus Dei—a whole new branch of the evil cult bastards we thought we’d already destroyed. Turned out there were pockets of them all over the world, with all sorts of fun plans to exterminate the Others. The one we’d just stopped involved a serum that temporarily gave humans the abilities of a werewolf, which would’ve let their soldiers kill just about anything.