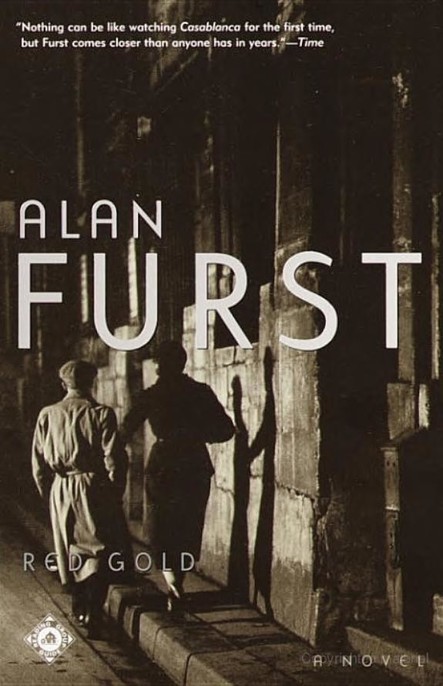 “What will become of us in twenty years’ time?” we asked ourselves one evening. Thirty years have passed now. Raymond was guillotined: “Anarchist gangster” (so the newspapers). I came across Jean again in Brussels, a worker and a trade-union organizer, still a fighter for liberty after ten years in jail. Luce has died of tuberculosis, naturally. For my part, I have undergone a little over ten years of various forms of captivity, agitated in seven countries, and written twenty books. I own nothing. On several occasions a Press with a vast circulation has hurled filth at me because I spoke the truth. Behind us lies a victorious revolution gone astray, several abortive attempts at revolution, and massacres in so great a number as to inspire a certain dizziness. And to think that it is not over yet.

Casson woke in a room in a cheap hotel and smoked his last cigarette. The window by the bed was open and the shade, yellow and faded, bumped gently against the sill in the morning breeze. When it moved he could see fierce blue sky, a bar of sunlight on the lead sheeting of the roof across the courtyard. Something in the air, he thought, a ghost of something, and the sky was lit a certain way.
So then, autumn.

A knock at the door; a woman came in and sat on the edge of the bed. She had a room down the hall and came to see him sometimes. He offered her the cigarette, she inhaled and gave it back. “Thank you,” she said. She stood up, pulled her slip over her head and hung it on a nail in the wall, then climbed in next to him. “Tell me,” she said, “what is it you see out there?”

She pulled the blanket up so it covered their shoulders. “You live in a dream,” she said.

He felt her shrug. “I don’t know—why bother?”

She settled next to him, so the tips of her breasts brushed the skin of his back, ran a finger down the line of hair from his chest to his stomach, and slid her hand between his legs. He stubbed the cigarette out carefully in a saucer he kept on the windowsill, then closed his eyes. For a time he stayed like that, adrift.

He turned to face her, she rested a knee on his hip, opening her legs. After a moment she said, “Your hands are always warm.”

She laughed, then kissed him. “Not you,” she said. He could smell wine on her breath.

His mind wandered. It was very quiet, all he could hear was her breathing, long and slow, and the yellow shade, bumping against the sill in the morning air.

Place Clichy. He sat at an outside table at a café and sipped the roast barley infusion the waiter brought him.
Coffee,
he thought, remembering it. Very expensive now, he didn’t have the money. He stared out at the square, Clichy a little lost in the daylight, the cheap hotels and dance halls gray and crooked in the morning sun, but Casson didn’t mind. He liked it—in the same way he liked deserted movie sets and winter beaches.

On the chair next to him somebody had left a damp copy of yesterday’s
Le Soir.
He spread it out on the table.

. . . the low hills of Lokhvitsa, brooding at nightfall, the steep banks of the river Dnieper, the grumble of distant cannonade. Suddenly, white Very lights fired from flare pistols, sputtering as they float to earth. A signal! Guderian’s Third Panzer has linked up with Kleist’s Sixteenth Panzer! The Kiev pocket has snapped shut like a trap: 300,000 Russian casualties, 600,000 taken prisoner, five Soviet armies obliterated. Now, Kiev must fall within hours. Victorious Wehrmacht columns burst into song as they prepare to march into the defeated city.

Casson shook his head
—who
writes this shit?
His eyes wandered to the top of the column. Oh, from their foreign correspondent, Georges Broux. Well, that explained it. Once upon a time, when he’d been Jean Casson, producer of gangster films, with an office near the Champs-Elysées, Georges Broux had sent him a screen-play.
Morning Must Come,
something like that. Maybe it was
Dawn
that had to come, or
A New Day,
but that was the general idea. La Belle France brought to her knees by decadence and socialism. “Dear Georges, thanks for letting us have a look; unfortunately . . .” And did, Casson wondered, the Wehrmacht actually burst into song? Maybe it did.

He searched in his pocket until he found the cigarette stub and lit it, sipped his barley coffee, turned to the movie page. Playing at the Impériale, over on the Champs-Elysées, was
Premier Rendezvous—
first date—with Danielle Darrieux and Louis Jourdan. If you’d seen that, the Gaumont had “a frothy romantic comedy.” Or, if you were really hard to please, you could go out to Neuilly for “a little jewel, bubbling over with mirth! A sly French wink!” Casson read through the listings for the smaller theatres, sometimes they ran revivals and his old films showed up.
No Way Out
or
The Devil’s Bridge.
Maybe, even,
Night Run.

He heard the engine—tuned to a perfect hum—and forced himself to look up casually. A black
traction-avant
Citroën, a Gestapo car, had pulled to the curb in front of the café. Casson’s heart hammered against his ribs. He bent over the newspaper, concealing his face, and turned the page. A goalie leaped toward the edge of his net as the ball sailed past his hands, a jumble of print, this team 2, that team 1. He had an identity card,
Marin, Jean Louis,
and a ration book. Nothing more. It wasn’t a quality fake, he’d bought it from a taxi driver, one phone call and that was the end of him. Casson was wanted by the Gestapo; taken in for questioning at the rue des Saussaies office three months earlier, he had crawled out an unbarred window and escaped over the roof. Dumb luck, Casson thought, the kind that doesn’t come a second time.

The driver got out of the Citroën and held the back door open. A tall man in a dark suit, a raincoat worn over his shoulders, came out of the little hotel next to the café. He was young and fair, very white, very drawn. There wasn’t much, really there wasn’t anything, that you couldn’t buy on the place Clichy. Perhaps the German officer had bought something he hadn’t liked—or maybe it was just the next morning he didn’t like it. He paused at the door, put one hand on the roof, leaned forward. Was he going to be sick? No, he climbed into the car, the driver slammed the door.

Look down.
That was barely in time. Casson stared at people— who were they? It was just something he could not stop himself from doing. And the man who’d held the door for his superior had caught him at it.
Nantes 0, Lille 0. Caen 3, Rouen 2. Please.
The Citroën idled, then the front door closed, the driver put the car in gear and drove off, turning onto the boulevard Batignolles.

His room at the Hotel Victoria. Six floors up, under the roof. Ten by ten, narrow iron bed, a chair, a washstand. Ancient wallpaper, the color of oatmeal, and bare wooden boards. Faint smell of sulfur, burned to get rid of the bugs, faint smell of black tobacco. And all the rest of it. Casson took an overcoat down from a hook in the wall. Not so bad. He rubbed his thumb idly across a small stain above the pocket. He’d bought it back in August, when he still had a little money, from a peddler’s cart in the place République. For winter, he’d thought, but he wasn’t the one who was going to wear it this winter.

He hunted through the pockets, made sure the Goddess of Luck hadn’t left a fifty-franc note in there for him. No, nothing. He rolled the coat up tight, held it to the right side of his body. It was his one possession and La Patronne knew it. He owed three weeks’ rent, if the owner caught him taking it out of the hotel, she’d stop him, would make a great scene, would probably call the police. Like a mythic beast she stood behind the hotel desk, keeping guard on the door. Draped always in black, wearing broken carpet slippers for her sore feet. Flabby face, eyes like wet stones. She could smell money in the next block. She truly could, Casson thought.

He closed his door silently, went downstairs one cautious step at a time. On the landing of the second floor he became aware of conversation in the lobby, something not right in the tone of it. Halfway down the final flight he stopped. He could see black shoes, blue trousers, the bottom of a cape.
Merde.
Police. Not an exotic moment in the life of the Hotel Victoria, but Casson could have done without it. He stood still, held his breath, listened intently.
About forty years old. Was last seen. If by chance he should.

He went cold. Tried to swallow. The police voice stopped. A long moment. Casson could hear people talking in the street outside the door. Then, finally, the patronne.
Mmm, no, she didn’t
think so. It wasn’t anybody she’d seen. Of course she would notify
the préfecture if.
Jesus, they were looking at a photograph. He counted to three, then clomped down the stairs in a hurry, making all the noise he could. The policeman turned to glance at him as he went by, the patronne looked up from the photograph. “
Bonjour,
madame,” he muttered—busy, tense, angry at the world. She started to say something to him, he could feel her mind working, but he was through the door in three strides and that was that.

He went around the corner, slowed down, got his composure back. Then headed south, toward the 3rd Arrondissement. A bright day, the little ghost of a chill still hung in the morning air. Early autumn this year, he thought. Which meant: early winter.
Well, good.
Maybe he’d get a few francs more for the overcoat.

He took backstreets, crossing into the 10th Arrondissement. Turgot, Condorcet, d’Abbeville. Then the rue des Petits-Hotels—yes, there were some. On rue Paradis, too many Germans, milling around the Baccarat salesroom. Then, a choice: to cross the boulevard you could take either the rue de la Fidelité or the passage du Désir—street of fidelity or alley of desire. Which? He took the alley, but noted that it ran downhill. Next, he hurried across the broad boulevard Magenta. Too wide, too open. That fucking Haussmann, he thought, rebuilding Paris a hundred years earlier, designing open boulevards to facilitate field-of-fire, cannon shot, against the revolutionary mobs of days to come. A visionary, in his way. He had destroyed the medieval rat’s nest of Paris streets, anybody, even a lumbering German, could find his way around. Real Parisians, even those, like Casson, who’d spent their lives in the Passy district of the snob 16th, knew the value of a good maze, rank with crumbling drains and metal
pissotières
on the corners.

Why Read Moby-Dick? by Nathaniel Philbrick
Treasure Island!!! by Sara Levine
My Soul Immortal by Jen Printy
Deadly Desire (Carrington-Hill Investigations Book 2) by Allenton, Kate
The Amazon's Curse by Gena Showalter
The Mapkeeper and the Rise of the Wardens by Katie Cash
The No. 2 Global Detective by Toby Clements
One Word From You: A Pride and Prejudice Adaptation by Natalie Penna
Some Sweet Day by Bryan Woolley
The Drowning Man by Vinduska, Sara