Read Releasing the Dragon: Myths and Legends, Book One Online

Releasing the Dragon: Myths and Legends, Book One 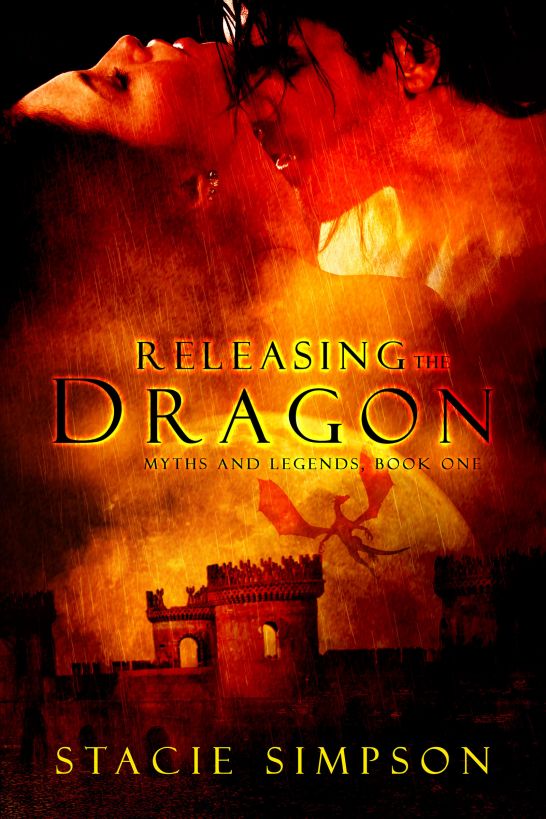 Myths and Legends, Book One

Releasing the Dragon: Myths and Legends, Book
One

All right reserved. Without limiting the rights under
copyright above, no part of this publication may be reproduced,
stored in or introduced into a retrieval system, or transmitted, in
any form, or by any means (electronic, mechanical, photocopying,
recording, or otherwise) without the prior written permission of
the copyright owner.

This book is a work of fiction and any resemblance to
actual persons, living or dead, or places, events or locales is
purely coincidental. The characters are productions of the author's
imagination and are used fictitiously.

Many thanks to my friends and family for all their
love and support. Without all of you cheering for me I never would
have finished this book. I'd especially like to say thank you to
Marcia and Lin for reading the earlier drafts and providing much
needed feedback. Finally, since we all know every book is judged by
its cover, a special thank you goes out to Fiona Jayde Media for
the wonderful cover that epitomizes the erotically romantic essence
of this story.

I stood by the railing on the upper level of
Mystique watching the writhing mass of bodies on the dance floor
below. Based on everything I'd heard and read about Mystique I
expected to see provocative dancing, but this... This was beyond
anything I could have imagined. There was far too much nudity to be
legal in a public place, and if I wasn't mistaken, some of the men
down there should be wearing condoms.

Instead of being appalled by what I was
seeing, like I told myself I should be, I was intrigued. How could
a place like this exist? - Especially in one of the highest ranked
resorts in the world? Why weren't the cops in here busting everyone
for indecent exposure or public fornication?

I looked out over the club, taking in the
sights and the sounds and decided -
I don't care how they get
away with it as long as I can join in the fun.

Misty darkness filled most of the club with
the exception of colored spotlights used to illuminate the bars on
both levels and the elevated stages and pedestals around the dance
floor. On those stages and pedestals talented dancers moved their
bodies seductively wearing minuscule costumes that transformed them
into sizzling hot demons. Stimulating music filled the air tugging
at my body with its thumping beats and erotic rhythms. Everything
came together to create an atmosphere of mystery and lust worthy of
the name Mystique. It was the perfect place to shed my inhibitions,
to move in time with other bodies and feel the hypnotic pull of my
deepest desires.

The moment I stepped into Mystique, I felt an
exhilarating sensation rush through my body. It was lust in its
purest form, no thoughts or feelings, just a physical craving for
carnal pleasure. The craving had been strongest near the entrance
but lessened when I climbed the stairs to the upper level. Now, as
I drifted down the spiral staircase leading to the dance floor,
waves of desire crashed over me, threatening to pull me under with
every step I took. I didn't understand what was happening to me,
but I knew I wanted to feel more of the sinful heat building inside
of me.

By the time I reached the bottom of the
stairs the music was flowing through my body, guiding me the way a
snake charmer compels a serpent. I danced my way to the center of
the floor with slow, sensual movements, brushing against hot, slick
bodies as the heaving crowd closed in around me.

Within seconds strong, masculine hands
smoothed over my shoulders heating the bare flesh left exposed by
the thin, strapless dress I wore. The hands traveled slowly down my
arms, then gripped my hips and pulled me roughly against a hard,
male body. A thrill went through me as I threw my hands in the air
and danced, my body undulating suggestively against the bulge I
felt in the front of his pants. When the hands on my hips suddenly
tightened, his fingers digging in with bruising strength, I looked
over my shoulder into deep, blue eyes glazed with lust so intense
it stole my breath. I gave a little twist of my hips that made his
eyes close, his head fall back with a groan of pure need.

Tingles of pleasure turned to jolts of
electricity as our bodies moved together. Public sex had never
seemed like a good idea, but here in Mystique, I couldn't think of
anything I wanted more. All around us men and women were pressed
together, grinding their bodies against each other in a writhing
frenzy. Many of them were half dressed; all of them were mindless
in their pursuit of sexual fulfillment. Ecstatic moans broke
through the music, mingled with the sounds of bare flesh slapping
together. The musk of sex and the salt of sweat filled my head with
their intoxicating aroma.

Soon we were joined by another man. My eyes
drank in the sight of his bare chest and the jeans he wore
unbuttoned, riding low on his hips. As he moved in closer, dancing
in front of me, his sculpted muscles brushed against my breasts,
teasing my nipples into throbbing peaks of need. I strained forward
lifting my breasts higher, begging for more. Taking that as an
invitation, he skimmed his hands slowly up my sides, grazing his
thumbs over the tight buds, testing to see how far I would let him
go. When I didn't protest, he eased the front of my dress down
exposing my breast for his hot, wet mouth to devour. At the first
touch of his tongue desire took over my body completely, had me
quivering as I burrowed my fingers through his thick, blonde hair.
He licked and sucked with ravenous hunger while my breathing grew
more labored by the second.

The man at my back must have taken the other
man's actions as a signal to move forward because I felt him
working to free his erection behind me. His calloused hands
returned to my body massaging my thighs with increasing pressure.
He was dragging the hemline of my dress higher with every pass of
his hands on my overheated flesh. His hips moved behind me with
erotic intent, making my womb clench with anticipation. Warm hands
slid up over my bare ass, then down along my hip bones and pressed
against my lower abdomen just above my black, lacy thong. He paused
for a moment, waiting to see if I would stop him.

A tiny voice in the back of my mind screamed
that I shouldn't let him do this. That I shouldn't let the other
man fondle my breasts in clear view of all these people. I opened
my mouth to tell them to stop, but the only thing that came out was
a harsh demand for more. Nothing could penetrate the fog clouding
my mind except the pleasure their hands and mouths brought me.

I closed my eyes and let my head fall back
with a moan when I felt his hand slip under my panties... and then
I was alone on the dance floor. There were still people all around
me, but there seemed to be an unseen barrier that blocked everyone
from touching me.

I looked around in confusion, my mind so
muddled by the haze of lust that I couldn't make sense of anything.
That was when I looked up and realized I was being watched. A tall
man with dark hair stood on the balcony overlooking the dance
floor. His intense gaze was focused on me, piercing, as if he could
see straight into my soul. I was frozen in place, like prey caught
in the sights of a predator. I couldn't move or look away. I could
only watch as rage and lust blazed in his dark, hungry eyes.

The nightclub dissolved around me. I saw
myself in his arms, pinned to the wall with my legs wrapped around
his trim waist, my hands gripping his broad shoulders tightly while
he drove his aroused flesh into me over and over again. On some
level I knew the vision wasn't real, but my body reacted as if it
was. The fire the other men had been stoking suddenly burst into
flames drenching my panties with a violent orgasm that left me
trembling while I gasped for air. As the orgasm ripped through my
body I saw him thrusting harder, deeper, frantically pounding into
the wet center of my quivering body. Through it all his eyes bore
into mine, holding me in place while the fantasy played out. With a
final thrust of his powerful hips he growled savagely and buried
himself inside me while his cock pulsed with his own release.

Before I could catch my breath the dance club
came roaring back into focus shattering the vision and leaving me
wet and aching alone on the dance floor. When I looked up at the
balcony the man had vanished. I went to the upper level in search
of him but found no sign he had ever been there. I wondered if he
was even real or just a fantasy born of the raging lust threatening
to consume me again. I took one last look at the dance floor below
and fled while the thought to do so could still form in my
mind.

Upon waking the following morning I could
hardly believe my behavior the night before. I shuddered when I
thought about what I had almost done. My love of dancing has
compelled me to spend hundreds of nights dancing in clubs without
ever taking a stranger to bed - let alone having sex with two
strangers on the dance floor. But last night was different, it
wasn't about dancing, it was about a total loss of control, about
letting go and drowning in sensation. Within the walls of Mystique
there was no holding back, no rules of propriety or social norms to
follow. Not a single person stood on the periphery afraid to dance,
afraid of what people might think. Everyone seemed to be in the
same hazy, lustful state that I was in, responding as if the air we
breathed was an aphrodisiac. Every touch, every sensation was
amplified, left me eager for more. It was exhilarating and
frightening, and completely unexplainable since I hadn't consumed a
drop of alcohol or ingested a single illicit drug.