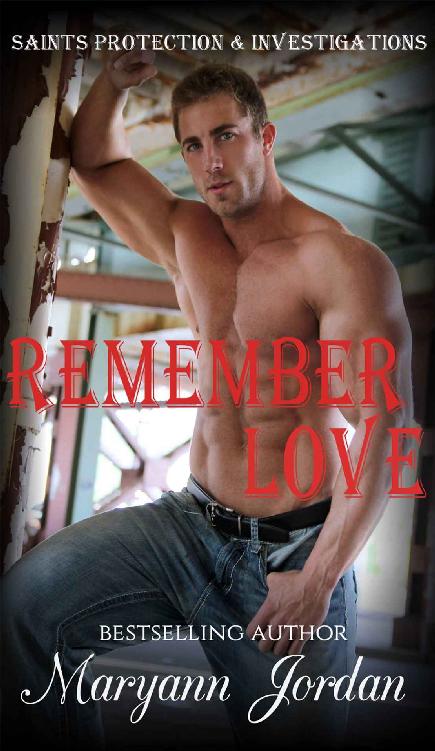 If you are reading this book and did not purchase it, then you are reading an illegal pirated copy. If you would be concerned about working for no pay, then please respect the author’s work! Make sure that you are only reading a copy that has been officially released by the author.

To those who keep our airports, borders, schools, and communities safe, this book is dedicated to you. Your tireless efforts to assure our safety is noticed…and appreciated.

Other books by Maryann Jordan

First and foremost, I have to thank my husband, Michael. Always believing in me and wanting me to pursue my dreams, this book would not be possible without his support.

My best friend, Tammie, who for twenty years has been with me through thick and thin. You’ve filled the role of confidant, supporter, and sister.

My dear friend, Myckel Anne, who keeps me on track, keeps me grounded, and most of all – keeps my secrets. Thank you for not only being my proofreader, my marketing assistant, but my friend.

Going from blogger to author has allowed me to have the friendship and advice of several wonderful authors who always answered my questions, helped me over rough spots, and cheered me on. To Kristine Raymond, you gave me the green light when I wondered if I was crazy and you never let me give up. MJ Nightingale and Andrea Michelle – you two have made a huge impact on my life. EJ Shorthall, Victoria Brock, Jen Andrews, Andrea Long, A.d. Ellis, ML Steinbrunn, Sandee Love, thank you from the bottom of my heart.

My beta readers kept me sane, cheered me on, found all my silly errors, and often helped me understand my characters through their eyes.

Shannon Brandee Eversoll as my editor and Myckel Anne Phillips as my proofreader gave their time and talents to making Love’s Taming as well written as it can be.

My street team, Jordan’s Jewells, you all are amazing! You volunteer your time to promote my books and I cannot thank you enough! I hope you will stay with me, because I have lots more stories inside, just waiting to be written!

My Personal Assistant, Barbara Martoncik and Marketing Assistant, Myckel Anne Philliips, are the two women keep me going when I feel overwhelmed and I am so grateful for not only their assistance, but their friendship.

Andrea Michelle of Artistry in Design has now created all of my covers and she is amazing at taking my vision and creating a reality. Eric McKinney, my photographer and his wonder models, grace my covers.

Most importantly, thank you readers. You allow me into your home for a few hours as you disappear into my characters and you support me as I follow my indie author dreams.

B
laise Hanssen reached
his large hand over to the seat next to him and gently petted the small kitten. The thin, scraggly body fell to the side, its little claws coming out as it tried to defend itself. “Ow! It’s okay, lil’ bit,” he said, scratching the soft ears. “I’ll get you home and fed in just a minute.”

He drove down the long, rural road, his workweek ended, and looked forward to the weekend. The woods on either side grew thick with the summer foliage. Smiling, he felt the stress of his job fade away as his old jeep bounced along the ruts.

He had stopped by the grocery on his way home and found the stray hiding under his vehicle when he got back. He guesstimated the little ball of fur was about two months old, but had probably been living on its own for a while. The slight rumble of a tiny purr sounded underneath his fingertips and he grinned once more.
Always another stray…how the hell do they find me?

Lifting his gaze back to the gravel driveway, he turned and appreciated the view. He bought the property over a year ago from the daughter of an old man who had passed away. She wanted to divest herself of the eyesore as quickly as possible and Blaise scooped up the acreage for very little money. The old man’s house was not in terrible shape, but it took a few months and quite a few do-it-yourself projects to make it a comfortable home for himself and his constant furry houseguests.

Coming around a curve in the driveway and into a clearing, he grinned again when he viewed one of his favorite houseguests lounging on the front porch waiting for him.

Parking, he scooped up the kitten and stepped out of the jeep, walking toward the beauty, while calling out, “Ransom!”

Standing as fast as his old, arthritic bones would allow, Ransom greeted him with a joyous lick, nuzzling his hand to see if there was a treat. Sniffing the spitting kitten instead, Ransom turned his reproachful eyes up toward him. Putting his hand in his pocket, Blaise pulled out a milk-bone, ruffling the furry head of the beautiful collie. He was one of his oldest pets and the most loyal.

“Come on, boy. I’ve got to get everyone fed and then it’s back out on the town for me tonight.”

The old dog ambled through the house with Blaise as he greeted his menagerie of cats, and into rooms he built onto the back, behind the kitchen and laundry room. One door led to a large space, resembling a veterinarian’s office and another led to a room full of feed. Setting the small kitten into a crate, he quickly filled the water and food dishes before closing the door. “Sorry, lil’ bit. I’ve got to keep you quarantined until I can check you out and make sure you’re up to date on your vaccines.” The small kitten, eyes large, sniffed the proferred food suspiciously before greedily digging in.

Blaise then filled a multitude of containers with feed and headed out the back to a special area. Barking filled the air, as he moved toward his kennels of rescue dogs. They jumped, yelped, barked, and tail-wagged their excitement over both getting fed and seeing their caretaker.

“Yeah, yeah, I know,” he laughed, as he made his way down the row. “Some for you King, and you Sasha, and we mustn’t forget you, Bossco.”

As he finished their runs and feedings, he headed back inside the house, storing the containers and then following Ransom into the kitchen. Preparing the special dinner for the few elderly dogs and cats, he fed them inside.

By the time all of the animals were cared for, he realized he needed to rush. Tonight, the Saints were all meeting at Chuck’s Bar and Grille. He chuckled as he made his way upstairs to the bathroom, thinking about their ever-expanding group. Stepping into the shower after stripping and tossing his clothes onto the bed, he let the hot water ease his muscles as he reflected on how lucky he felt to have such a rewarding job with the best of the best.

When Jack Bryant, a former Special Forces sergeant, retired he re-created one of his last assignments, where he worked with a diverse group of men on a mission in Afghanistan. Jack discovered that the group worked coherently and without egos, making the experience a life-changing one, as well as a successful mission. It took Jack over a year to build his compound underneath his massive, luxury house on over twenty acres at the base of the Blue Ridge Mountains. Jack recruited men from the FBI, CIA, SEALs, Special Forces, ATF, police, and DEA to create his new business—Saints Protection & Investigations.

Upon graduating from a school for Veterinary Medicine, Blaise decided that instead of joining a practice, he would pay off his student loans by becoming a government veterinarian, first for the Department of Agriculture and then recruited by the DEA. His work with the canine program quickly moved him into a Veterinary Medical Officer position. He had hoped for a more exciting career, but red-tape had sapped the energy out of him even though he loved the idea of investigating. Finding Jack’s Saints had been a dream come true.

Originally all single men, they were slowly finding women that fit their lifestyle and so the bar nights took on a completely different role. Instead of a chance to pick up the flavor of the evening for many of them, it was time spent with their co-workers, friends, and their women.

Ransom bumped Blaise’s hand with his nose, having followed him upstairs, as he stepped out of the shower. “Hey, boy. Did you finish eating? I hate leaving, but it’s a Saints night at Chuck’s.”

Dressing in faded jeans that fit his muscular thighs and a polo that stretched over his massive chest, he stood in front of the mirror staring at his reflection. His Nordic heritage showed in his blond hair, square jaw, and blue eyes.

“Don’t worry, old boy. I won’t be bringing anyone home tonight.” He chuckled to himself, realizing that he almost never brought a woman home. At least, not after a few attempts, during which he found that the seduction of a woman was difficult with barking, wet noses, and the occasional cat sitting in front of his date with their leg up, licking their bottoms.
Yeah, that’s a mood killer!

“But I’ll be back early,” he promised Ransom, then turned to see two cats now curled up on his bed, sleeping on the clothes he tossed there earlier. He started to shoo them away but knew the clothes were destined for the washing machine anyway.
What’s a little more cat fur?

The thought of fur had him remembering several dates where, even if they went back to her place, the women complained of getting fur on their clothes when their bodies were flush in a deep kiss. With one last look at the cats on the bed, he headed back downstairs. The realization that bar pickups were just not his thing anymore hit him.
I can’t even remember the last one!
Now that so many of his friends had settled down, he yearned for more. Closing and locking the door behind him, he got back into his jeep. As he turned the vehicle around in his yard, he knew it would take a special woman to be able to accept his life. A very special woman.
And I don’t have a clue where I’ll find her.

Blaise arrived at
Chuck’s at the same time several of his co-workers drove into the parking lot. He grinned as Cam assisted his very pregnant wife, Miriam, from their vehicle, followed closely by Jack and his pregnant wife, Bethany.

Bones in the Barrow by Josephine Bell
A Foreign Affair by Russell, Stella
Siren's Garter: Issue One August 2016 by Miriam F. Martin
Cameron, Paige - The Billionaire Maverick Bargains for a Wife [Wives for the Western Billionaires 3] (Siren Publishing Everlasting Classic) by Paige Cameron
My Pops Is Tops! by Nancy Krulik
The Sanctuary by Raymond Khoury
The Devil In Disguise by Sloane, Stefanie
Family Practice by Charlene Weir
Fifty Shades Freed by E. L. James
Maid to Love (Man Maid Book 3) by Rebecca Avery