Read Reminders of Him Online

“What a glorious and touching read, a forever keeper. The kind of book that gets handed down.”

—
USA Today
on
It Ends with Us

“
Confess
, by Colleen Hoover, is a beautiful and devastating story that will make you feel so much.”

“
It Ends with Us
tackles [a] difficult subject . . . with romantic tenderness and emotional heft. The relationships are portrayed with compassion and honesty, and the author’s note at the end that explains Hoover’s personal connection to the subject matter is a must-read. Packed with riveting drama and painful truths, this book powerfully illustrates the devastation of abuse—and the strength of the survivors.”

“Hoover joins the ranks of such luminaries as Jennifer Weiner and Jojo Moyes, with a dash of Gillian Flynn. Sure to please a plethora of readers.”

“Betrayals, secrets, and shifting family loyalties keep the pages turning in this excellent contemporary from Hoover . . . This is Hoover at her very best.” 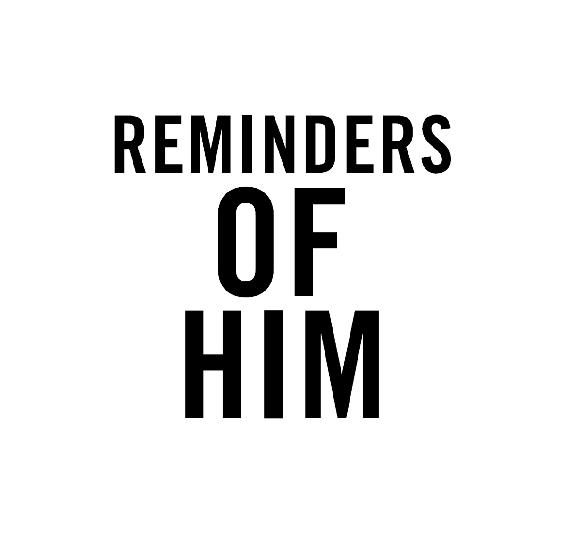 OTHER TITLES BY COLLEEN HOOVER

It Ends with Us

Maybe Not: A Novella 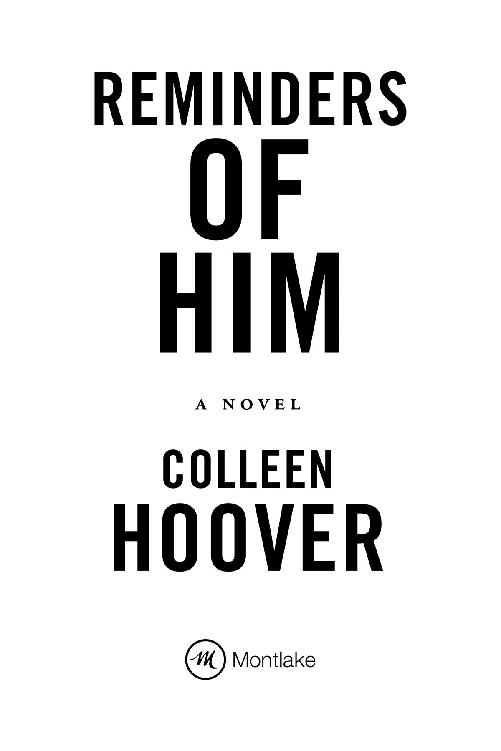 This book is for Tasara.

There’s a small wooden cross staked into the ground on the side of the road with the date of his death written on it.

Scotty would hate it. I bet his mother put it there.

“Can you pull over?”

The driver slows down and brings the cab to a stop. I get out and walk back to where the cross is. I shake it side to side until the dirt loosens around it, and then I pull it out of the ground.

I didn’t pay attention to the details during the pretrial. When I heard he had crawled several yards away from the car, I started humming so I wouldn’t hear anything else the prosecutor said. Then, to avoid having to sit through details if the case went to trial, I pleaded guilty.

Because technically, I was.

I thought you were dead, Scotty. But dead people can’t crawl.

I walk back to the cab with the cross in hand. I set it on the back seat next to me and wait for the driver to pull back onto the road, but
he doesn’t. I glance at him in the rearview mirror, and he’s staring at me with a raised brow.

“Stealing roadside memorials has to be some kind of bad karma. You sure you want to take that?”

I look away from him and lie. “Yes. I’m the one who put it there.” I can still feel him staring at me as he pulls back onto the road.

My new apartment is only two miles from here, but it’s in the opposite direction from where I used to live. I don’t have a car, so I decided to find a place closer to downtown this time so I can walk to work. If I can even find a job. It’ll be difficult with my history and lack of experience. And, according to the cabdriver, the bad karma I’m probably carrying around right now.

Stealing Scotty’s memorial might be bad karma, but one could argue that leaving a memorial up for a guy who verbally expressed his hatred for roadside memorials could be bad karma as well. That’s why I had the driver take the detour down this back road. I knew Grace probably left something at the location of the wreck, and I felt I owed it to Scotty to remove it.

“Cash or card?” the driver asks.

I look at the meter and pull cash and a tip out of my purse and hand it to him after he parks. Then I grab my suitcase and the wooden cross I just stole and make my way out of the cab and up to the building.

My new apartment isn’t part of a huge complex. It’s just a single-standing unit flanked by an abandoned car lot on one side and a convenience store on the other. Plywood covers a downstairs window. Beer cans in various stages of decay litter the property. I kick one aside so that it doesn’t get stuck in the wheels of my suitcase.

The place looks even worse than it did online, but I expected as much. The landlord didn’t even ask for my name when I called to see if they had any vacancies. She said, “We always have vacancies. Bring cash; I’m in apartment one.” Then she hung up.

I knock on apartment one. There’s a cat in the window staring at me. It’s so motionless I start to wonder if it’s a statue, but then it blinks and slinks away.

The door opens, and an older, tiny woman stares up at me with a disgruntled look about her. She has curlers in her hair and lipstick smeared to her nose. “I don’t need anything you’re selling.”

I stare at the lipstick, noting how it’s bleeding into the wrinkles hugging her mouth. “I called last week about an apartment. You said you’d have one available.”

Recognition flashes on the woman’s prune-like face. She makes a
hmph
sound while looking me up and down. “Didn’t expect you to look like this.”

I don’t know what to make of her comment. I look down at my jeans and T-shirt while she walks away from the door for a few seconds. She comes back with a zipper pouch. “Five fifty a month. First and last month’s rent is due today.”

I count out the money and hand it to her. “There’s no lease?”

She laughs, stuffing the cash into her pouch. “You’re in apartment six.” She points a finger up. “That’s right above me, so keep it down, I go to bed early.”

“What utilities are included?”

“Water and trash, but you cover electric. It’s on now—you have three days to get it switched into your name. Deposit is two fifty to the light company.”

Fuck.
Three days to come up with $250? I’m starting to question my decision to come back so soon, but when I was released from transitional housing, I had two choices: spend all my money trying to survive in that town, or drive the three hundred miles and spend all my money in this one.

I’d rather be in the town that holds all the people once connected to Scotty.

The woman takes a step back into her apartment. “Welcome to Paradise Apartments. I’ll bring you a kitten once you get settled.”

I immediately put my hand on her door to prevent her from closing it. “Wait. What? A kitten?”

I step away from her door like it’ll somehow protect me from what she just said. “No, thank you. I don’t want a kitten.”

“Who wouldn’t want a kitten?”

She huffs, like my response is completely unreasonable. “I’ll make you a deal,” she says. “I’ll leave the electric on for two weeks if you take a kitten.”
What in the hell kind of place is this?
“Fine,” she says, responding to my silence as if it’s a negotiation tactic. “The
month
. I’ll leave the electric on for the whole month if you just take one kitten.” She walks into her apartment but leaves the door open.

I don’t want a kitten at all, ever, but not having to spend $250 on an electricity deposit this month would be worth several kittens.

She reappears with a small black-and-orange kitten. She places it in my hands. “There ya go. My name is Ruth if you need anything, but try not to need anything.” She goes to close her door again.

“Wait. Can you tell me where I can find a pay phone?”

She chuckles. “Yeah, back in 2005.” She closes her door completely.

The kitten meows, but it’s not a sweet meow. It sounds more like a cry for help. “You and me both,” I mutter.

I make my way toward the stairs with my suitcase and my . . . kitten. Maybe I should have held out a few more months before coming back here. I worked to save up just over $2,000, but most of that was spent on moving here. I should have saved up more. What if I don’t find a job right away? And now I’m tasked with the responsibility of keeping a kitten alive.

My life just became ten times more difficult than it was yesterday.

I make it up to the apartment with the kitten clinging to my shirt. I insert the key in the lock and have to use both hands to pull on the door and get the key to turn. When I push open the door to my new apartment, I hold my breath, afraid of what it’s going to smell like.

I flip on the light switch and look around, releasing my breath slowly. There’s not much of a smell. That’s both good and bad.

There’s a couch in the living room, but that’s literally all there is. A small living room, an even smaller kitchen, no dining room. No bedroom. It’s an efficiency apartment with a closet and a bathroom so small the toilet touches the tub.

I’m twenty-six years old, and this is the first time I’ve ever officially lived somewhere alone. It’s both terrifying and liberating.

I don’t know if I can afford this place after the month is up, but I’m going to try. Even if that means applying to every business I walk past.

Having my own apartment can only serve to help as I plead my case to the Landrys. It’ll show I’m independent now. Even if that independence will be a struggle.

The kitten wants down, so I put her on the floor in the living room. She walks around, crying out for whoever she left downstairs. I feel a pang in my chest as I watch her searching corners for a way out. A way back home. A way back to her mother and siblings.

She looks like a bumblebee, or something out of Halloween, with her black and orange splotches.

“What are we going to name you?”

I know she’ll more than likely be nameless for a few days while I think about it. I take the responsibility of naming things very seriously. The last time I was responsible for naming someone, I took it more
seriously than I’ve ever taken anything. That could have been because the whole time I sat in my cell during my pregnancy, all there was to do was think about baby names.

I chose the name Diem because I knew as soon as I was released, I was going to make my way back here and do everything in my power to find her.