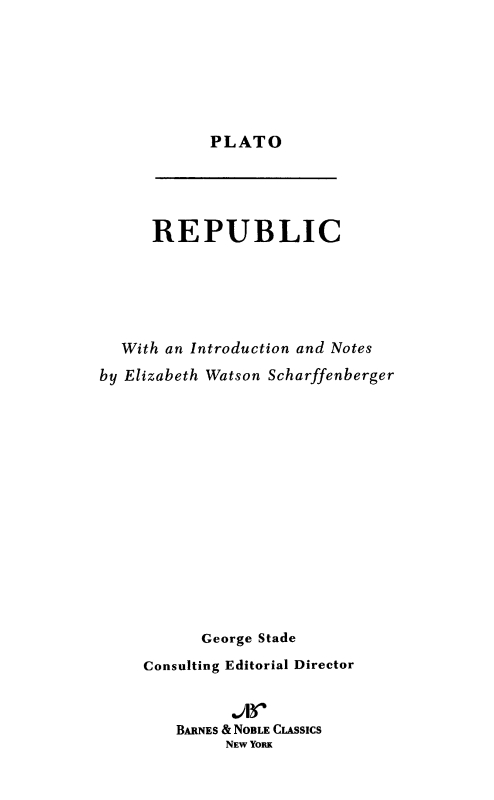 Table of Contents
FROM THE PAGES OF REPUBLIC
Title Page
Copyright Page
PLATO
THE WORLD OF PLATO AND REPUBLIC
Introduction
NOTE ON THE TRANSLATION
BOOK 1 - SPEAKERS
BOOK 2
BOOK 3
BOOK 4
BOOK 5
BOOK 6
BOOK 7
BOOK 8
BOOK 9
BOOK 10
ENDNOTES
INSPIRED BY PLATO AND REPUBLIC
COMMENTS & QUESTIONS
FOR FURTHER READING
INDEX
FROM THE PAGES OF
REPUBLIC
... but as concerning justice, what is it?—to speak the truth and pay your debts—no more than this? And even to this are there not exceptions? (1.331c)
Is the attempt to determine the way of man’s life so small a matter in your eyes—to determine how life may be passed by each one of us to the greatest advantage? (1.344d)
For my own part I openly declare that I am not convinced, and that I do not believe injustice to be more gainful than justice, even if uncontrolled and allowed to have free play. (1.345a)
I propose therefore that we inquire into the nature of justice and injustice, first as they appear in the State, and secondly in the individual, proceeding from the greater to the lesser and comparing them. (2.368e—369a)
... I am myself reminded that we are not all alike; there are diversities of nature among us which are adapted to different occupations. (2.370a—b)
Then it will be our duty to select, if we can, natures which are fitted for the task of guarding the city? (2.374e)
But in reality justice was such as we were describing, being concerned, however, not with the outward man, but with the inward, which is the true self and concernment of man: for the just man does not permit the several elements within him to interfere with one another, or any of them to do the work of the others—he sets in order his own inner life, and is his own master and his own law, and at peace within himself ... (4.443c—d)
“Until philosophers are kings, or the kings and princes of this world have the spirit and power of philosophy, and political greatness and wisdom meet in one, and those commoner natures who pursue either to the exclusion of the other are compelled to stand aside, cities will never have rest from their evils—no, nor the human race, as I believe—and then only will this our State have a possibility of life and behold the light of day.” (5.473d—e)
... for you have often been told that the idea of good is the highest knowledge, and that all other things become useful and advantageous only by their use of this. (6.505a)
—You have shown me a strange image, and they are strange prisoners.—Like ourselves, I replied; and they see only their own shadows, or the shadows of one another, which the fire throws on the opposite wall of the cave. (7.515a)
He who is the real tyrant, whatever men may think, is the real slave, and is obliged to practise the greatest adulation and servility, and to be the flatterer of the vilest of mankind. He has desires which he is utterly unable to satisfy, and has more wants than anyone, and is truly poor, if you know how to inspect the whole soul of him: all his life long he is beset with fear and is full of convulsions and distractions, even as the State he resembles: and surely the resemblance holds ... (9.579d—e)
These, then, are the prizes and rewards and gifts which are bestowed upon the just by gods and men in this present life, in addition to the other good things which justice of herself provides ... And yet, I said, all these are as nothing either in number or greatness in comparison with those other recompenses which await both just and unjust after death. ( 10.613e—614a) 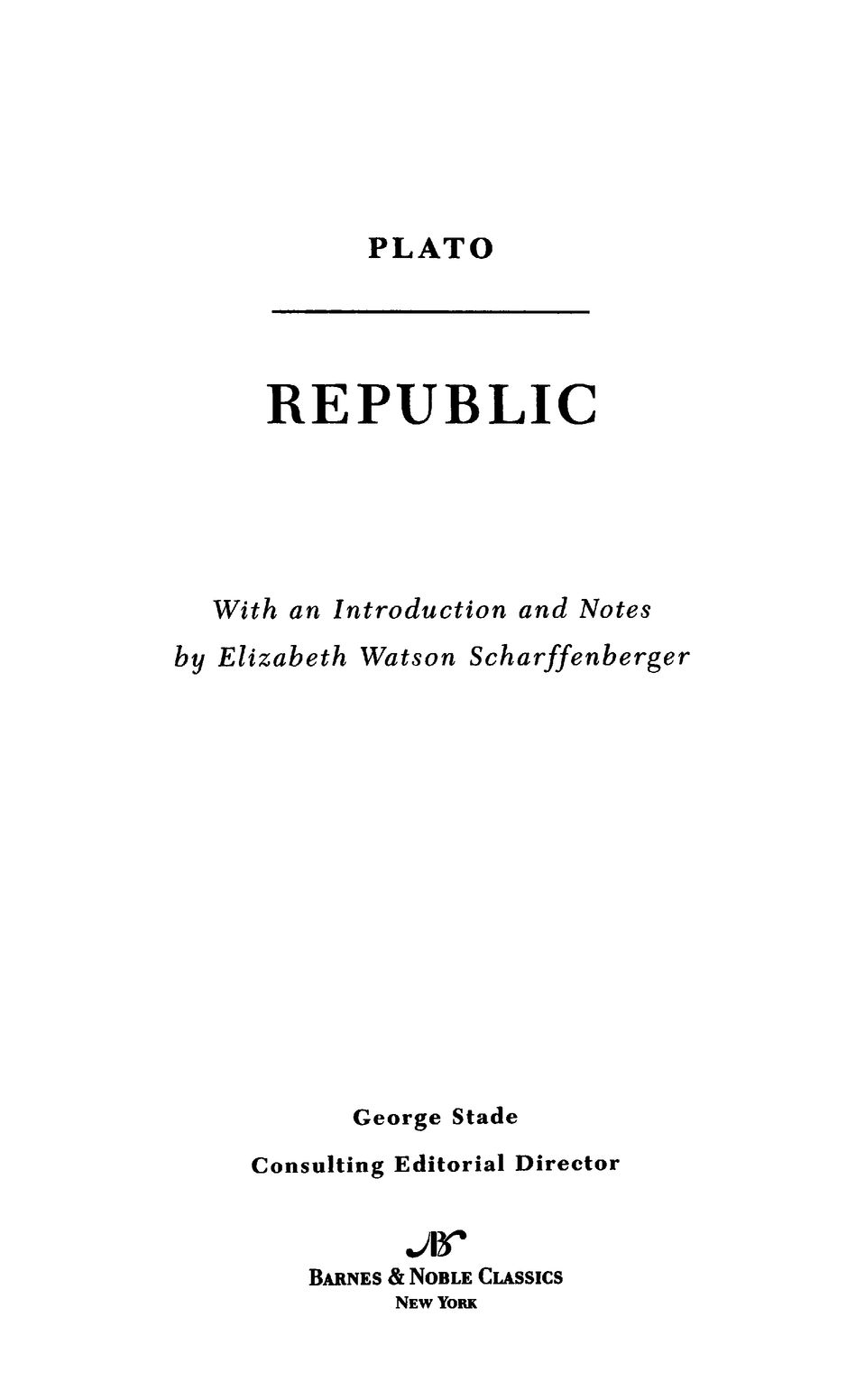 Published by Barnes & Noble Books
122 Fifth Avenue
New York, NY 10011
www.barnesandnoble.com/classics
Plato is thought to have composed
Republic
sometime
during the 380s to the 350s B.C.E.
Benjamin Jowett’s translation first appeared in 1871.
Published in 2004 by Barnes & Noble Classics with new Introduction,
Notes, Biography, Chronology, A Note on Conveyances, Comments & Questions,
and For Further Reading.
Introduction, Note on the Translation, Notes, and For Further Reading
Copyright @ 2004 by Elizabeth Watson Scharffenberger.
Note on Plato, The World of Plato and
Republic,
Inspired By, and
Comments & Questions Copyright © 2004 by Barnes & Noble, Inc.
All rights reserved. No part of this publication may be reproduced or
transmitted in any form or by any means, electronic or mechanical,
including photocopy, recording, or any information storage and
retrieval system, without the prior written permission of the publisher.
Barnes & Noble Classics and the Barnes & Noble Classics colophon are
trademarks of Barnes & Noble, Inc.
Republic
ISBN-13: 978-1-59308-097-6 ISBN-10: 1-59308-097-2
eISBN : 978-1-411-43303-8
LC Control Number 2003116604
Produced and published in conjunction with:
Fine Creative Media, Inc.
322 Eighth Avenue
New York, NY 10001
Michael J. Fine, President and Publisher
Printed in Mexico
QM
3 5 7 9 10 8 6 4
PLATO
Plato was born into a wealthy, aristocratic Athenian family in 428 or 427 B.C.E., and he lived until 348 or 347. He had kinship ties on both sides of his family with many prominent men in Athens. His father, Ariston, died when he was a child, and his mother, Perictione, was subsequently married to Pyrilampes. Plato was raised in Pyrilampes’ household along with his older brothers (Glaucon and Adeimantus), a stepbrother (Demos), and a half-brother (Antiphon). As young men, Plato and his brothers were close to Socrates.
Plato’s familial connections and wealth would have made it easy for him to embark on a political career in Athens. But he did not become politically active, perhaps because he became disillusioned with politics after witnessing, first, the brutal oligarchic regime of the Thirty Tyrants, who seized control of Athens at the end of the Peloponnesian War in 404 B.C.E., and then the execution of Socrates, who was condemned to die in 399 under the restored democratic government for “not recognizing the gods recognized by the city and corrupting the youth.”
Plato traveled in the years after Socrates’ death, and he almost certainly spent time in Megara (near Corinth) and Syracuse (on Sicily). He became close friends with Dion, a kinsman of the tyrant of Syracuse, Dionysius I. Plato probably traveled to Syracuse three times during the period from the early 380s to the late 360s. He and Dion evidently planned to educate the tyrant’s son, Dionysius II, in the hopes that, upon succeeding his father, he would put into practice the political ideals they cherished. But these hopes were never fulfilled. Upon taking power in the early 360s, Dionysius II broke with both his kinsman and his tutor.
In the early 380s, Plato began teaching what he called “philosophy” at a place near the grove of the hero Academus on the outskirts of Athens. The school came to be called the “Academy” because of its location, and Plato remained at its head until his death, when his nephew Speusippus took over its administration. After Plato’s death, the Academy continued to be an important center of research and study for many centuries, attracting students from all over the Mediterranean world.
Plato probably started to compose dialogues before he established the Academy. All but a few of his dialogues feature Socrates as the main interlocutor, and most are peopled with figures who would have been well known, especially in Athens’ elite circles, during the fifth century. A large body of writing attributed to Plato survives from antiquity, including
Apology
(a recreation of Socrates’ defense speech), numerous dialogues, and a series of letters. Most of these works are considered to be truly by Plato, although the authenticity of some texts (including some of the letters and a handful of dialogues) has been doubted at various points in the last 2,400 years.
THE WORLD OF PLATO AND REPUBLIC
ADS
15.4Mb size Format: txt, pdf, ePub