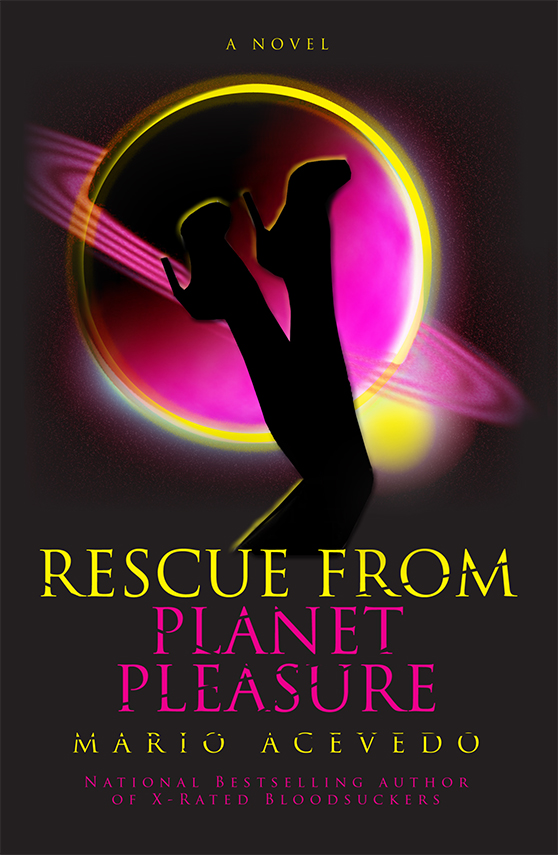 Planet Pleasure. The one place in the galaxy you seriously want to avoid, but it’s the next stop for Felix Gomez, detective-vampire and undead enforcer. His mission: rescue the bodacious vampiress, the hypersexual Carmen Arellano, from the clutches of ruthless warrior aliens. Her captors have doomed themselves by honing their military prowess at the expense of their libido, and Carmen is their last chance in regaining their mojo before they die out. Felix can’t waste any time because Phaedra, the ruthless bloodsucking ingénue—now with extra-superpowers—is making good on her threat to destroy the Araneum and take over the undead underworld. Luckily, Felix is not alone in his quest to save Carmen and stop Phaedra. That redheaded whirlwind with a gun, Jolie, has got his back. Also lending a hand is everyone’s favorite down-and-out trickster sage, Coyote, and he’s brought along his mom … la Malinche … aka La Llorona! Here it comes, ground zero of a mega-ton story bristling with action, interstellar double-crosses, skin-walkers, Hopi magic, and trigger-happy goons. Exactly what you’d expect from Felix Gomez.

Praise for Rescue from Planet Pleasure

“Acevedo is a very disturbed man—and I mean that in the absolute finest sense of the term.”

“The most imaginative story I’ve read in months … trashy … silly and so much fun.”

“A comedic approach to vampirism.”

“A high-speed, well-crafted romp through the forests of the night.”

To my critique group,
for constantly reminding me of the error of my ways.

The voice blurted through the receiver of a Princess telephone. It had been in a box of junk that lay beside my coffin and started to ring and kept ringing until I answered the goddamned thing.

The clock radio on my bookshelf said 2:12 p.m., the best naptime for us vampires. I resented the interruption of the telephone—
an unconnected telephone
, no less. This was supposed to be the start of a long overdue break from work, a staycation during which I was all set to do nothing but kick back, drink bloody cocktails, and get laid.

I settled into the quilted satin lining of my coffin, receiver to ear, hoping I was dreaming. My coffin lay on a heavy table in the back room of my office. “Who
is
this?” The
fuck
, as in
who-the-fuck-is-this
, was implied.

The
pendejo
cinched it.
Coyote.

“It’s been awhile,” I drawled sleepily. Years since we parted ways in Los Angeles after the ancient trickster had helped me bring down a
nidus
—vampire nest—of renegade bloodsuckers. “What do you need … money?”

“
Vato
, you need to get here right away and save the world.”

“But first you have to go to outer space.”

Okay, maybe I was dreaming. I was about to drop the phone and nod off when he mentioned: “Rescue Carmen and bring her home.”

Carmen?
The name bored through the fog of sleepiness like a searchlight and illuminated the memories of the most bodacious female vampire who ever lived.

Years ago, I had lost Carmen to an alien gangster, a short, round scumbag by the name of Clayborn. He had approached our government with a deal: alien technology for earth women. Why earth women?
Female intuition.
Human females were valued as empathetic companions. Think highly compassionate pets.

According to Clayborn, the aliens recognized Carmen’s psychic powers, took her captive, teleported her to an interspace cruiser, and whisked her to an auction, where she fetched top alien dollar. Jolie and I snagged Clayborn before he could flee Earth. We were about to go all Gitmo on his double-crossing ass when agents from the Galactic Union came to arrest him. Not surprisingly, he was a wanted fugitive back on his home turf. Since finding and returning Carmen was no concern of the alien cops, Jolie obliged them by decapitating Clayborn and handing over his corpse.

All this happened because our government and their cronies in Cress Tech International had gotten kissy-faced with Clayborn and schemed to make billions from extraterrestrial technology. They had kidnapped victims for the aliens, even going as far as crashing a commuter jet—killing dozens—to hide the disappearance of abducted women.

“Wait a minute, you and the Araneum?” The Araneum—the secret worldwide network of vampires—had long ago grabbed Coyote by his skinny neck and tossed his scruffy carcass out of their ranks.

“They need me. I need you. Things are going bad for us vampires,
ese
. We need Carmen to fight back.”

My jumbled thoughts snapped into place. If the Araneum was in cahoots with Coyote, then a very bad prediction was about to come true.

To say Phaedra was trouble would be to say that Hitler caused a little mischief. Phaedra was a scheming teenage wench with incredible psychic powers. I’d saved her from zombies once. Mortally wounded during our escape from the zombie animator’s lair, I had reluctantly turned her into a vampire to keep her from dying. Last time I saw Phaedra, she had pinned my ass to the floor with a blast of psychic energy. She vowed to destroy the Araneum and set herself up as queen of the undead bloodsuckers. Then she disappeared. Now she was back and apparently ready to fulfill her promise of conquest.

But if Phaedra was on the rampage, I hadn’t heard anything. “What’s happened?”

“Hold on,” I said. “Give me a minute to catch up. How does Carmen fit into this?”

Coyote answered, “Carmen is the only vampire powerful enough to stop Phaedra.”

“Carmen is light years away. How are we?—”

Jolie?
“Since when have you known Jol?—”

“She’s on the way to get you. Should be there soon.”

A knock sounded on the hall door.

I dropped the handset onto its cradle and let the phone fall back into the box.

The knock turned into pounding. My office is on the second floor of the Oriental Theater in the Denver Highlands. If anyone wanted to get up here, I’d have to buzz them in. That an uninvited guest was at my door was not a good omen. Just as I reached under my pillow for a Colt Python .357 Magnum and its load of hollow-point silver bullets, a woman hollered.

No mistaking the charm in that dainty voice. Jolie.

Revolver in hand, I climbed out of the coffin, slid off the table and left the back room to answer the hall door. Standing to one side—in case it wasn’t Jolie—I extended my fangs and talons, threw the deadbolt, and turned the knob. I tried to appear as badass as I could in my bare feet and pajamas. The door popped open.

Jolie entered, wearing Joe Rocket armored riding leathers and heavy biker boots. Very much the deadly vampire enforcer who once had orders to kill me but didn’t.

Apprehension sparked over the penumbra of her aura, orange as fire. The
tapetum lucidum
of her unmasked eyes were radioactive red with urgency. Coppery hair pulled into a ponytail and gathered in a leather tail tamer. Face slathered with Dermablend and makeup to dampen the many freckles and darken her anemic undead complexion. She carried a flip-up motorcycle helmet in her gloved hand. “Let’s go. We need to burn asphalt.”

“It’s good to see you, too.” Jolie and I shared a lot, mostly heartache over Carmen.

“Yeah, yeah. We’ll exchange the how-have-you-beens when we get to Coyote’s.”

People call New Mexico the Land of Enchantment. Having grown up there, I knew the northwest section more as the Land of Nothing, unless you get a boner for lots of sky and dirt. There’s a reason the place is uninhabited.

The phone rang again. I retracted my fangs and claws, returned to the back room, and plucked the handset from the box. I answered though I knew who it had to be.

“I need some
ficha
. Pay you back when the
vieja’s
welfare check comes.
Gracias
.”

The phone died once more before I could say no. Mooching bastard.

Jolie entered the back room. Her aura crackled with urgency. Dropping the handset once again into the box, I gave her and her motorcycle getup another once-over. “So you’re on a bike. I’m following you?”

“Think again.” One, I wasn’t riding a motorcycle when I could be busting the miles on the comfy seats of my Cadillac. Two, I don’t ride bitch.

“Felix, we can’t waste time. Phaedra is close. We gotta go.
Now
.” Jolie tapped her wrist impatiently. “Unless your car can cruise at a hundred fifty plus, you’re riding with me.”

“Practically.” She walked by my coffin, looked into the box and retrieved the Princess phone. “What’s with the vintage crap?”

“Found that in the alley. My mom owned a phone like it. Back when she was alive.”

“Oh.” Jolie set the phone down. She plucked a small backpack from under the table and flung it at me. “Pack your shit and let’s go.” She tromped into my front room and helped herself to a 500ml bag of human blood from the office mini-fridge.

The backpack wouldn’t hold much. “I take it we won’t be gone for long.”

She fanged a hole in the top of the bag, inserted a straw and drank. “With luck, a few days.”

“How about with no luck?”