Read Revenge of the Rose Online

Revenge of the Rose 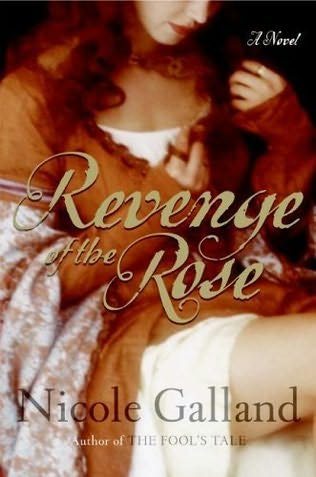 Revenge of the Rose
Nicole Galland 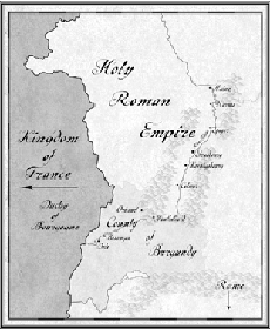 Prologue
[a passage introducing key elements of all that follows]
7 June, late in the twelfth century
in the ninth year of the reign of Konrad the Fair, Holy Roman Emperor
some seven or eight years after the Third Crusade
two decades into the era of courtly love, which proposed that
females just might have value above the waist

The
women were completing their transformation into ladies.

They did this in the largest pavilion of the unfinished alpine palace as most of the men broke the fast outside.

“And who are you playing at this time?” one woman asked another.

“I’m the chatelaine of Bern,” a dark-haired girl said.

“By whose request?” asked a blonde.

“The Duke of Bavaria,” she answered, and several of the others murmured enviously.

Under Marcus’s direction, two dozen pair of hands rummaged through the piles of elegant robes and tunics. All of them— even those grumpy few who truly did this only for the coin— were smiling now, smiling at the outfits, the sumptuous brocade silks and fancy, exotic weavings, sleeves edged with gold, silk and leather girdles, fabrics that troubadours could drone on about for hours. The broad pavilion was bright; it had been rigged to let the cloth roof be drawn away so that the summer-morning sun could come pouring in through the tops of the firs and birches shading the pavilion.

This was a palace still in the making. The courtyard walls were unfinished (but already overdecorated), and the kitchen was conveniently in working order. There were rough wooden huts for the workmen and their tools, but such men had been removed from the site for this fortnight, and no other permanent structures yet stood. One end of the yard, where the women’s pavilion was staked, was not even enclosed yet. Here the hill they were on rose so steeply above them, it was nearly a wooded cliff, and His Majesty liked the aesthetic of this: nature peeking timidly into what would soon be a magnificent, artificial world, the most sumptuous and glittering of his many glittering courts. In the meantime, with the necessary tents and pavilions, it provided the illusion of an idyll, and illusions were always useful to a monarch.

“I’m to be a shepherdess for a few days,” announced the most buxom woman in the bunch, and then added, winking, “for the bishop of Friedberg.” Everyone— except Marcus— laughed, and she turned to the tall one, with the heart-shaped face. “And you, Jeannette? Who are you to be?”

“The naked sister of the Count of Savoy,” Jeannette said with mock solemnity.

“By whose request?” asked someone else.

“The Count of Savoy,” she answered, grinning, and the tent roared with their laughter.

“From what I’ve heard of his sister, I’m surprised she didn’t come herself,” one of the women muttered to another, and they all laughed at this as well.

There was a lot of laughter in this pavilion, every year, whatever hillside it was pitched on. The prelates, knights, and noblemen outside heard only the bright cheer of such laughter, not the cynicism that inspired it, and the women knew that this was part of the appeal. Besides Marcus the imperial steward, only Konrad— their sovereign and host— had any inkling of what the women really found amusing.

Marcus was a black-haired man with a narrow, keen-featured face. Each year the women teased him, claiming he was so attractive, they should beg him to take their virtue if only they had not misplaced it. Usually he enjoyed their attentions, and he was popular with all of them for being undemanding. But this year he was agitated and distracted.

What Marcus had in dark good looks, Konrad— King of Germany, of Sicily, of Burgundy, and Emperor of the Holy Roman Empire— had in charm. He was a tall, solidly built man with perfect teeth, pale eyes, light red hair and beard, and a ring of a different gemstone on each finger. He loomed large now in the doorway in scarlet and gold, beaming with the hearty confidence of an empire builder. He had earned, by a balance of bloodshed and diplomacy, the right to peace, to prosperity, and to this unorthodox (but to the women, profitable) summer ritual: two weeks of the finest illusory debauchery in the Empire. This year the debauchery was taking place in the woody hills below the Black Forest, safe from the troublesome Italians farther south and the troublesome Burgundians to the west. The common women who worked near the royal courts competed for an invitation to this fortnight of easy abundance: two weeks of wearing gowns that were far finer than any they would ever own, of eating
doucetes
and other delicacies they never could afford at home, of being treated almost as politely as the landed ladies they were trussed up to resemble, and finally, bags of generous material reward from the emperor’s own elegant palm before they left. Their only duty— beyond the usual ones of their vocation— was to loosen the lips of the excitable young lordlings, men whose fathers and uncles and older brothers and counselors were not always well inclined toward their emperor. Only Jouglet the minstrel unearthed better intelligence for Konrad than did these women in their playful masquerading.

“Your Majesty!” the women said nearly in one breath when they realized who had come in through the flap, accompanied by his bodyguards. They all curtsied, unselfconscious in their ratty shifts.

Konrad chuckled. “Welcome, ladies, to my final summer as a bachelor. Those shifts will never do. We’ve brought you better undergarments— yours to keep! Have your boy bring them round now,” he said to silent Marcus behind him. He turned back to the women. “Venison of rose for dinner, my pearls, and goose in verjuice. Are there any complaints I should hear before we begin?”

“
My
only complaint is that Seneschal Marcus has not asked me to carve out time in my busy schedule for him,” said the buxom shepherdess, and there was a round of giggles.

The women made teasing sounds of disappointment, and Konrad shook his head with comradely sorrow. “I know, my lovelies, I know, he’s breaking all the rules. He won’t tell me what he’s up to. I suspect he’s brought his own distraction.” Under his breath he added warningly, “And I intend to find out who she is.” Marcus involuntarily winced, and Konrad laughed, smacking him on the arm. “See you all outside,” he announced, and gesturing for Marcus to hold open the canvas flap, he strode out into the clear, cool morning.

Jouglet the fiddler had not shown up this summer, to Konrad’s great annoyance. For years the young tenor had dutifully abandoned other adventures to appear, fiddle and bow in hand, and lead commencement revelries. Konrad could not conceive that anything would be appealing enough to turn his favored court musician truant. But truant Jouglet was. Such an absence was particularly irritating this summer, when the cacophony of rumors regarding a royal wedding required constant damping. The French king’s outrageous land ambitions had made it clear that the emperor needed to heighten his own presence in the west; since he was overdue for wedlock, he had decided to seek a wife from the western flank of his empire. More specifically, he wanted a bride from his infamously independent border county of Burgundy, which historically had deeper ties to the sovereign Duchy of Bourgogne, just across the Saone, than to the Empire itself. Burgundy happened to be ruled by Konrad’s paternal uncle, Alphonse, whom Konrad could not abide. Alphonse, like every Count of Burgundy before him, sought opportunities to defy Imperial power; Konrad, like every emperor before him, therefore sought opportunities to more closely weld the heart of Burgundy to his own court. Alphonse’s daughter Imogen was heiress to Burgundy, and Konrad’s marrying her would have been a simple, deft solution to the conflict. But Rome forbade a marriage of first cousins, and so Imogen had been betrothed to Marcus instead, while other Burgundian brides were being sought for His Imperial Majesty. Unfortunately, the emperor and his Assembly of Lords had mutual veto power, which so far meant every suggestion had been nullified, for Konrad would only contemplate a match that might increase the power of his throne, while the Assembly, with the pope’s encouragement, would only contemplate a match that did no such thing. As a result, every marriageable noblewoman in Burgundy was verbally paraded before Konrad’s wearied attention, and he wanted Jouglet present to artfully deflect them all.

Star Bright by Catherine Anderson
The Wild Zone by Joy Fielding
Where Memories Lie by Deborah Crombie
The Catastrophist: A Novel by Bennett, Ronan
Trading Reality by Michael Ridpath
The Doctor and Mr. Dylan by Rick Novak
The Wisdom of Oscar Wilde by the Wisdom of
Breene, K F - Jessica Brodie Diaries 01 by Back in the Saddle (v5.0)
A Tale Of Three Lions by H. Rider Haggard
The Black Hand by Will Thomas