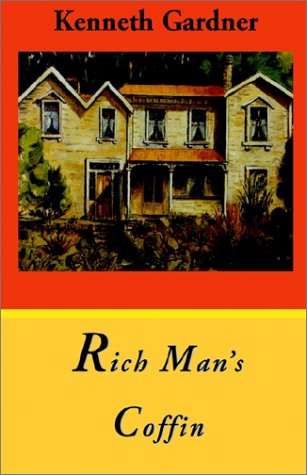 Gardner's debut novel, Rich Man's Coffin, won the 2002 San Diego Book Award for Best Biographical Novel. Many prominent names in the writing world thought it worthy of a Pulitzer Prize. Others were not so enthusiastic, as evidenced by the reviews below.

With this Special 10th Anniversary Edition, Gardner has enhanced the original excitement of this story, crafting it further into a leaner, lighter, and more moving style for the reader. Lovers of adventure and action alike will find this remarkable character's journey a delight to read, right up to the climactic end.

Based on the true story of an escaped American slave, this legend is like no other: A sea adventure turning into a barbaric clash with primitive culture, a quest full of romance and passion; and the lust for land, power, and freedom. This gripping tale has it all.

Hundreds of hours of meticulous research were poured into this book after the author stumbled across the hero's name on a parks and recreation sign along a remote beach in New Zealand. Stranded and penniless, much like the protagonist of his story, Gardner fully immersed himself in the project. He wrote the original 400-page manuscript longhand in thirty days, transcribing it later on a library computer; all while battling homelessness and hunger in a foreign country. The finished product was raw but readable.

Enjoy this polished edition, and feel free to leave a review for the new and improved Kindle version of the book.

Kenneth Gardner began writing at the age of six with his first book, The Devil's Gold. His first novel, Rich Man's Coffin, was written while he enjoyed a sabbatical in New Zealand. His busy career includes graduating from the University of North Carolina with honors as a National Merit Scholar, a stint in the Navy aboard nuclear submarines, and traveling the world. He lives in San Diego, California.

“You never know when you’re gonna need to swim.

You know that, boy?” She prodded, as she tossed him skyward. His small, wet belly slapped into her raised palms, as if she were catching a big, slippery fish falling from the heavens.

She baited her catch.

“You
never
know when you gonna need to swim, Arthur.

“Yes, m’am…” He began, stopped short by the sensation of water flooding his throat.

“You mind your back talk!”

She snapped, plunging him under. “I’ll show you what all the
white man’s food
has done to this African princess.

Get some proper potato and pig in you, like me, son!”

He popped up, gasping,

He showed all of his seven years; still his ample mother had no trouble lofting him overhead.

She said, shoving him out into the murky pond where floated the flotsam of duck feathers and filth.

“Here it is one of the best days of the summer, and you’re gonna mess it up for us.

You know the Master will be back from town soon.”

Threshing water and weeds with a dog paddle, he said, “Mama, I can run faster than I can swim.

Besides, the cabin is just other side of that old hedge.

He ain’t gonna catch us.”

Suddenly, a dust cloud appeared down the road, with the sound of horses and their driver coming closer.

She overtook him as he reached the bank.

She scooped him under one arm as her feet met mud. She galloped up onto the grassy shore, dripping as she scrambled between scurrying birds, weeping willows, and the other wet women squirming along the well-worn way through the big, bushy boxwood. Happily, the crack of the cabin door slamming shut behind them stood in for the backlash of the whip that day.

I came from Sydney to New Zealand on the Shibboleth.

The ship eventually went down in Rio de Janeiro, where she was a whaler as well.”

You said, ‘where
she
was a whaler.’

The ship’s name was
Shibboleth
.

Us whalers refer to our ships as
she
.”

You made it sound as if some
woman
was a whaler, Harper, and we all know that women don’t whale!”

“I see that you have taken the liberty to study the ship’s logs pretty well, Judge, using my sea name and all like that.

Why don’t you just go ahead and tell my story for me?” The courtroom burst into laughter. The black man joined in, his laugh heard above all the rest.

“Now, Arpur,” The Judge said, conceding a bit of respect upon the witness.

“Please forgive me, and please continue.”

The man looked around, his grin fading as his eyes swam the courtroom of unfamiliar faces. He cleared his throat and spoke. “The Foreman at the station was Tom Evans, and the owner was Johnny Jones.

I was six or seven seasons whaling at the Island.”

Stewart Island? Oh, you mean the little island just above the southern half of New Zealand, the island named Kapiti!”

“Yes. There were four ships working the station.” He stopped again in awkward silence.

“Is that it then, of your whaling days?

And what about now?”

“I live at Picton Road, over by Nelson.

Major Baillie has been my employer going on ten years now.

I originally arrived in this country just after the Battle of Kuititanga.”

“And for the record, my Maori brothers who may not remember, that battle took place the Sixteenth of November, 1839.”

I made up one of the boat’s crew and was the after oarsman.

We commenced whaling a few days after I arrived.”

His dangling jaw implied more words to follow, but he suddenly shut his mouth and folded his hands.

“And that is all I have to say. I am not on trial. You asked me to come and tell you about my role in the Maori wars, and here I am.”

“Arpur, what year is it now?” inquired the Judge.

“Now, Judge, I am not that senile! State your business. You know that I am seventy-eight years old.”

Arpur was speechless. A heavy strain dripped down his trembling face.

Yelled the Judge, and he waved his hand.

The elder men grumbled and shot menacing looks at Arpur as they milled out of the courtroom.

The Judge approached the large black man and put an arm around his broad shoulders.

“Now, my friend, you will have dinner at my house with my family tonight, and we will hear the entire story, won’t we?”

Arpur stood and shuffled softly with small steps beside his friend, as a sleepy child being led to bed. He seemed to search his mind for a way to begin.

He rehearsed the line under his breath as if preparing for a speech. He declared,

“Most people know me as Black Jack White...”

“That’s what I thought you said.”

His mother sighed. She paused. “Not a sailor, a
wh
aler. And how does a black man from the south go about finding any whales?”

“The ships. They leave from up north all the time.

Jeff was tellin’ me.”

“And what does Jeff know about ships up north?

Hell, he hasn’t been anywhere but knee-deep in cotton his whole life.

You tellin’ me that he knows anything 'bout sea sailin’?” she asked.

The young man stood up from the kitchen table as he explained,

Ain’t nobody knows that ‘ceptin me, and now you. Jeff gets around, just like that old tomcat you hate so much gets around this farm.”

The woman blurted, as she shot up out of her rickety chair and slapped his hands down. She scolded,

“The only place that Jeff’s been is out cattin’ at night ‘round the old-timers’ shed.

He ain’t got nothin’ but gossip and second-hand stories from big talkers.

You willin’ to hang for that, Arthur?”

“No, ma’am, but...” Arthur looked up from the floor and tried to tell her more.

You got responsibility here.

You got a wife already.

That’s more than most of these old dogs around here got.

And Lord knows I don’t need you lookin’ after
me
, but
she
might!

Did you ever think about that?” she shouted.

Threatcon Delta by Andrew Britton
Beautiful Whispers (Ausmor Plantation Book 1 - Romance/Suspense) by Ayden, Alice
Quests of Simon Ark by Edward D. Hoch
The Sheriff and the Baby by C.C. Coburn
Warning Wendy by Kim Dare
The Happiest Days of Our Lives by Wil Wheaton
Elegy for a Broken Machine by Patrick Phillips
The Marriage Bed (The Medieval Knights Series) by Dain, Claudia
Tortured: Book Three of the Jason and Azazel Trilogy by V. J. Chambers
The Snow on the Cross by Brian Fitts