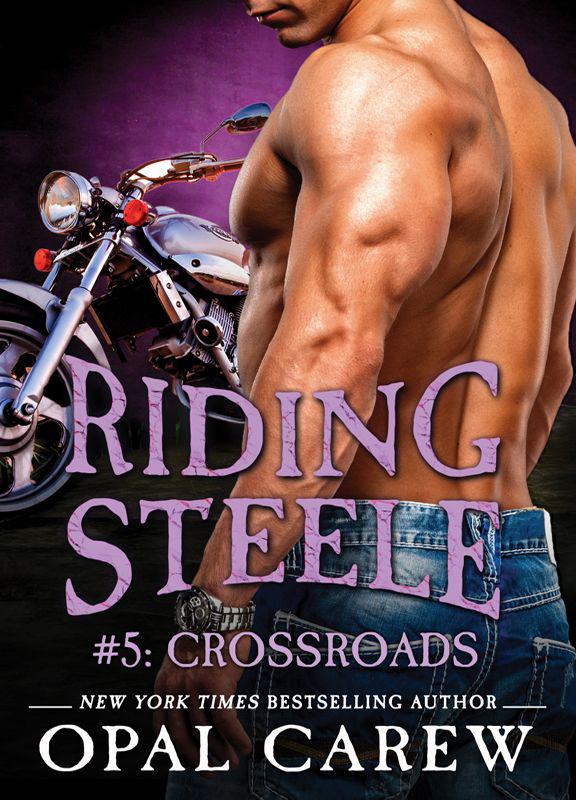 The author and publisher have provided this e-book to you for your personal use only. You may not make this e-book publicly available in any way.
Copyright infringement is against the law. If you believe the copy of this e-book you are reading infringes on the author’s copyright, please notify the publisher at:
http://us.macmillanusa.com/piracy
.

The phone rang and Rip picked it up.

“Yeah.” His gaze locked on Laurie. “Really? But that’s gotta be a five-hour ride from here.” His hands clenched into fists. “Yeah, I get it.
His
terms.” He listened for a while, clearly getting detailed instructions from his friend. “Okay. I’ll make sure I get her there in time.”

He stuffed his phone into his jeans pocket and turned to Laurie.

“Okay, we’ll have to boot it to get there in time. Laurie, you have to take the necklace to an Officer Parker, someone Killer knows and trusts. Your ex says if Parker confirms he has the necklace by ten
P.M.,
he’ll drop the charges. And if we don’t make it, he’ll prosecute and demand the maximum sentence.”

Laurie’s chest constricted. And with his connections and money, he’d get what he wanted.

“Don’t look so worried, Laurie. If we leave now, we should be able to make it with time to spare.”

Raven stood up and pulled on her jacket.

Laurie’s gaze darted to his, and her stomach tightened. “I … gave it to Steele.”

Laurie’s heart pounded. They didn’t even know where Steele was and with the deadline of 10:00
P.M.
, they didn’t have time to find him.

“Shit, it’d take us at least four hours to get to the next location we agreed on.” Rip glanced at his watch. “There’s no way we’d make the ten o’clock deadline.”

“All we can do is start in the direction of the sheriff’s office and hope that Steele contacts us,” Wild Card chimed in.

“You know he won’t do that until we’re plenty late showing up,” Dom said. “Which will be too late.”

Laurie trembled. They couldn’t give up on the opportunity for Laurie to walk away from this mess, but what could they do without the necklace?

Laurie’s gaze darted to Shock, who had just returned from the washroom, and hanging from his big fingers was the glittering collar of diamonds in question.

“You’ve got it!” Laurie exclaimed.

“Yeah, after you gave it to Steele that first day, he gave it to me for safekeeping.”

Raven held out her hand and took it, then admired it in the sunlight, an expression of awe on her face. “It’s so beautiful.”

She handed it back to Shock and he wrapped it in a black-and-white bandana and shoved it in his jacket pocket.

The wind raced across Laurie’s face as she clung to Rip as they sped along the dark highway. The sun had set and the road was lit by the light of the bikes’ headlights and the soft moonlight. They had been riding for four hours straight.

She held tight to Rip, finding comfort in leaning against his broad back. These men really were amazing. It seems they would do whatever they could to help and protect her. And it had all started with Wild Card snatching her from Donovan’s clutches.

She’d never had friends like this. Friends who understood her, and would do anything to help her. In fact, this was just what she’d always wanted. She felt cared for and happy when she was with them.

She rested her head against his back and closed her eyes. She was tired. This whole thing was exhausting, but hopefully it would soon be over. She wasn’t cut out to be a fugitive.

After a while, the bike slowed and they pulled off the highway. Laurie opened her eyes and watched the road ahead. Soon they drove into an urban area. Rip drove along the built-up streets, then turned his bike into the parking lot of an all-night diner.

The other bikers pulled up beside him. Rip dismounted.

“I’m going to take you over to the police station alone. Having a gang of bikers ride through town is likely to make the cops nervous. Killer suggested you go in alone, so I’m going to wait in a diner near the station while you deliver the necklace.” He glanced at her outfit and frowned, then glanced at Raven. “Rave, do you have something that looks a bit less biker babe?”

Raven pursed her lips. “Not really.”

Laurie stared up at him, her stomach tightening.

“It’s okay,” he assured her. “It’s not really a problem. We’ll just have you lose the jacket before you go in.”

“Okay.” But she didn’t feel better.

Shock handed Rip the crumpled bandana and he tucked it in his jacket.

“You can all wait here and have something to eat,” Rip said. “We shouldn’t be long.”

Laurie dismounted Wild Card’s bike then climbed on the back of Rip’s. He started it up and she clung to him as they rode a couple of miles farther into town. Rip pulled up to the side of the road and stopped the bike in front of a coffee shop.

“Okay, I don’t want to hang around outside the police station, and this is the closest place to wait. The station is that building over there.” Rip pointed to a brown brick building down the road a bit. “That’s the back of it. You’ll have to go around the block to get to the entrance. I’ll wait right here.” He pointed to the coffee shop.

She slipped off the leather jacket and handed it to him, then he pulled the necklace from his pocket, still in the black-and-white bandana, and pressed it into her hand.

She took the necklace and slipped it into her jeans pocket. “I’m nervous. I keep thinking this is some trick Donovan is pulling. That once I get in there, they’ll arrest me.”

He tipped up her chin and captured her gaze with his. His midnight blue eyes were reassuring. “You’ll be okay. Killer trusts this Officer Parker and his instincts are good. I’m just being extra cautious. No point making them nervous having you show up with a badass biker type.”

“Don’t identify yourself to anyone until you talk to Parker. Understand?”

She nodded again, then turned and walked along the sidewalk, her legs shaky. It was night, but the road was well lit by the streetlights. A black car drove by, then turned right at the traffic light on the corner. Once it was past, she crossed the street and continued down the street to the corner, then turned, walking out of sight of the coffee shop where Rip sat.

Her stomach fluttering, she walked along the sidewalk. This was a smaller street and no one was around, so she picked up her pace. The car she’d seen earlier was parked along the side of the road. She had an uneasy feeling. She was carrying a very expensive necklace. What if whoever was in the car intended to rob her?

But she realized no one would have any idea what she had in her pocket. And whoever had parked the car was probably already gone in the time it took her to walk the length of the previous street. Still, she hurried past the car, until she reached the next corner and turned right. She could see the entrance to the police station ahead.

She walked up the steps to the door, then drew in a deep breath, trying to calm her nerves. She steeled herself and grabbed the handle, then pulled open the big, glass door and stepped inside.

She walked through the quiet lobby wondering where to go. A uniformed officer walked toward her.

“This way.” He led her through a door and they walked past a few doorways then he led her into a small meeting room. “Wait here.”

She sat in the room wondering if this was an interrogation room, but it looked like a simple meeting room with a table with six chairs around it. There was no big mirror on the wall like she’d come to expect from Hollywood.

“Laurie?” A good-looking uniformed man, tall with wavy blond hair, stepped into the room. He had kind, brown eyes and a reassuring smile.

“I’m Officer Parker.” He sat down across from her and pulled a leather wallet from his pocket and showed her his badge identifying him as Officer Glen Parker. “From what Officer Grainger told me, you’ve been through quite an ordeal.”

She nodded. “That’s true, and I really appreciate your help.” She pulled the necklace from the inside pocket of her jacket and placed it on the table. “Here it is.”

He unwrapped the bandana and peered at the necklace, then whistled.

“Nice.” He glanced at the clock on the wall.

She peered at it to. There was barely a half hour left on the deadline.

“Okay. Let’s get this done right now,” he said.

He laid his badge on the table and placed the necklace in a glittering band below it, then pulled a cell phone from his pocket and took a picture. He tapped on the screen, then she heard the telltale
whoosh
of the message being sent.

“I don’t know. None of this seems real,” she said. “I swear he gave me the necklace. I can’t believe he reported it stolen.”

“Well, it’s all water under the bridge now. You’re free to go.” He smiled. “Would I say that if I didn’t know the charges are dropped?”

She drew in a deep breath and released it. Donovan had put her through hell, and all to have the last word in their relationship, to show her who was in control. Well, he’d gotten his petty revenge, and she was happy to wash her hands of him.

“Thank you so much.” She offered her hand and he shook it.

“My pleasure to help.” He stood up and she followed him back to the lobby. “Are you okay getting back to your friends?”

“Yes, thank you. Someone is waiting for me in the coffee shop around the corner.

She stepped into the warm night air, feeling as if a weight had been lifted from her shoulders. Surely Donovan was done with her now and she could return home and resume her normal life. She trotted down the stairs and turned left.

Not that life could ever be totally normal again after these experiences. She was glad to put Donovan behind her, but what about Steele? He had become jealous and possessive this morning, and taken off. They clearly had some issues to work out.

She turned the corner onto the quiet street, walking with a lilt to her steps, despite the concerns washing through her about Steele.

Vaguely she was aware of the same black car parked along the road that she’d seen earlier. As she got close to it, anxious to get back to Rip and get on with finding Steele, she cautiously stayed a couple of yards from it. Suddenly, she noticed a quick movement in the shadows between the buildings and a big hand covered her mouth and pulled her against a strong body. She struggled for air with the big palm clamped tightly over her, partially covering her nose. She tried desperately to scream, but couldn’t. She was shoved forward and the back door of the vehicle opened, then she was forced inside. She was feeling weak from lack of air, and her heart pounded wildly with the adrenaline surging through her.

It's Up to Charlie Hardin – eARC by Dean Ing
Pure Lust Vol. 4 by M. S. Parker
The Shelter: Book 1, The Beginning by Ira Tabankin
A Burn To Bear (Fire Bear Shifters Book 3) by Sloane Meyers
The Bond That Ties Us by Christine D'Abo
Child's Play by Alison Taylor
Low Road by Eddie B. Allen, Jr.
Sons of Taranis by S J A Turney
Lighthousekeeping by Jeanette Winterson
Earth Song: Twilight Serenade by Mark Wandrey