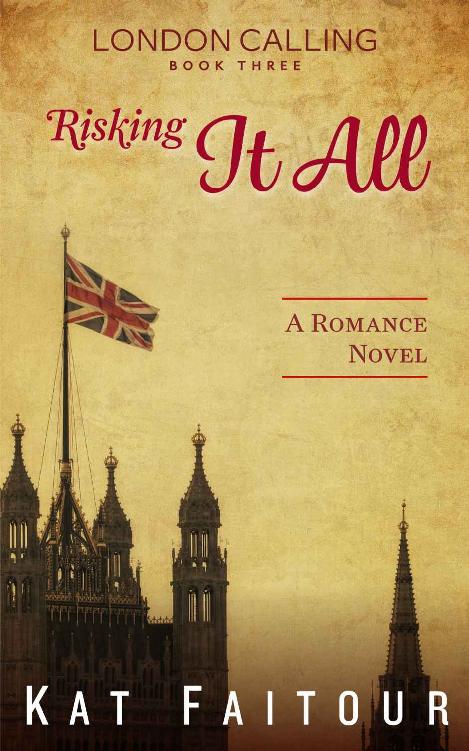 A Note from Kat

A
LSO
BY
K
AT
F
AITOUR

A Matter of Trust, London Calling Book One

Make sure you don’t miss new releases and free books by joining my readers group! Sign up at
http://www.katfaitour.com
and join the fun.

and all the other rebels and rogues, mavericks and mutineers that make life so fun.

Tamara Lush — fellow author and critique partner. Thank you for your encouragement and never-ending support. You are truly wonderful.

As such, he understood there were times one deceived with words. Other occasions demanded duplicity through action. The toughest challenges required both.

If the last year and the promises he’d made to reform his ways entered his mind, it didn’t show by the speed at which his fingers flew over the keyboard before him. His mission, he convinced himself, was necessary—his intentions harmless.

He toggled between open browser windows, rapidly scanning results before tunneling further down the treasure trove of information he unearthed.

Once again, the Internet proved to be a most powerful ally.

Even people as obsessively private as his current virtual assistant made mistakes, revealing unintentional bits about themselves with their search histories, social profiles, and purchases.

While she was better than most, his assistant, known to him only as MP, had one weakness—she shopped online.

That led him to credit card information and details about her fiercely guarded identity. He was close to victory.

A wide grin broke loose as he allowed a hum of excitement to flow through him. He knew a goldmine of information lay behind the last virtual door he faced. But rather than pressing the keys necessary to open the file, he leaned back in his chair, broadly stretching as he savored the moment.

It was a rare moment of joy.

And, because of his past, utterly undeserved.

She haunted him. When he arrived in London the year before, seemingly to visit his best friend Devon, Natalie had been Bennett Sterling’s personal assistant. The truth was Dominic had been there to infiltrate and exploit the security network of Sterling International. He’d gotten close to her, knowing she had access to the necessary logins and passcodes. During their time together, she made it easy to forget he had only planned to use her as a shortcut to his hack.

Now, every petite blond stranger made him pause to search her face, even though logic insisted it couldn’t be Natalie. He longed to hear her whiplash tongue, how she could flay a man—or woman—with her smart snappiness. Nat didn’t suffer fools, and Dominic was the biggest fool of them all. For beneath the sharp, confident exterior, he’d missed her vulnerabilities. He’d hurt her, horribly so, with his deceit. He still recalled how disillusionment had stripped her face of its color, leaving only her pale blue eyes to accuse and torment him.

Dominic closed his eyes as the familiar wave of guilt assailed him. However, replaying his actions in London did him no good. He’d do anything to change the past, but it was far too late. Rather, he tried to focus on the good that had come out of it all. Bennett Sterling was his business partner in a new endeavor and engaged to his best friend, Devon Sinclair. They’d made it through, in spite of Dominic’s actions and Bennett’s accusations.

Occasionally, their resilience allowed Dominic to hope. Surely, if Bennett and Devon could work out their differences, then there could be hope for him and Natalie.

The rest of the time, he knew better.

He’d tried to contact her, make amends. Hell, he was still trying. But she never responded to any of his messages, calls, or gifts.

His face warned as he thought of his efforts. She was probably enjoying a good laugh at his expense. Truth be told, he’d settle for her scorn if she’d only talk to him. But she never replied or answered, not even to breathe a fiery rejection.

She simply ignored him.

Dom shook himself out of his bittersweet memories. He leaned forward in his chair to press a key to wake up his monitor. Finally learning more about MP would take his mind off the past. When he’d hired her and she demanded complete privacy, secrecy even, he had allowed it. But curiosity finally won out, and he was determined to find out more about his efficient if eccentric virtual assistant.

He rolled his shoulders and neck, loosening muscles that had tightened in anticipation. Re-reading the prompt on the screen, he tapped an access code.

Immediately, streams of data filled his vision. He scanned her name, date of birth, and other demographics.

He paused, a reluctant chuckle escaping as he saw MP’s address.

A driver’s license photo flashed up, and he clicked on it, eyes narrowed.

Open-mouthed, he stared. Then he rapidly toggled back to her demographics. Could it be?

His computer chirped, interrupting his spinning thoughts. He fumbled with the mouse, unnaturally clumsy as he hastily minimized windows.

He clicked to connect with the incoming call. Even though it was a video link, his screen remained determinedly black.

Dom cleared his throat, playing for some time to overcome the shock. “Moneypenny.” He greeted his assistant with the nickname he’d coined from her initials, MP.

“No, no, stop that. We’ve discussed this. Call me Dominic. Or better yet, Dom.”

A pause, then the saccharine-coated sarcasm he appreciated most about her came through. “Or perhaps DM. Hmm. I wonder what asinine name I can substitute for your initials.”

Dominic didn’t miss a beat. “Moneypenny, if you want to call me Dungeon Master, I’m fine with that. In fact, I might prefer it.”

A husky laugh greeted his statement. “I’ll bear that in mind. How can I help today?”

“I’m moving to London.” Dominic announced his plans baldly. “As you know, I’m partnering with Bennett Sterling in the UK on some financial ventures.”

“Okay…” She drew the word out. “But isn’t that a little extreme? I thought you liked Chicago.”

He did. And so did she, according to what he’d just read about her.

“I do. But frankly, the time difference is a pain in the ass.” Plus, the professional alliance with Bennett was still in its infancy. Considering how their relationship started, Dom knew it would be to his benefit if he was in London personally. He hoped Bennett could get to know him better, not just as a business partner, but as a friend.

“My Internet security business will remain based in the US, technically. But since we don’t have brick-and-mortar headquarters, it’s easy enough for me to relocate. Plus, all my staff are remote.”

“Including you. Which brings me to my next question.” He paused to gather the right words. “Will you stay on with me as part of the team? You’re the best virtual assistant I’ve had.”

“I’m your first, you oaf.” Dominic didn’t mind the insult, he was used to their banter. “And to answer your question, yes. I can work around the time zones, and since we never meet, I don’t see a problem with it.”

No, they’d never met. She’d been adamant. The video link had never been used on their calls. And now, knowing what he’d seen moments before, he understood why. In his eagerness to know more, Dom got careless.

“Great! And since you’re here, I’ll count on you to help with the sale of my penthouse.” He looked around, admiring the space. He’d miss it. It had been home for the past few years. Busy reminiscing, he missed the baited silence on the call.

“What do you mean?” The words were calm, the voice soft.

Dominic maximized the windows with MP’s information. It was easy enough to multitask. Absently, he answered. “I’ll give you a percentage of the sale for your time, just like I would with a realtor. I trust you way more than I would some stranger.”

He scrolled through more images, delighting in the old magazine covers from a decade before. He’d had such a crush on her. “Don’t be silly, you’re practically around the corner.”

A succinct curse brought Dominic’s attention crashing back to MP. Panicked, he realized what he’d revealed. “Wait, Moneypenny—it’s not what you think.”

“It’s exactly what I think, so don’t bother lying to me, Dominic Martin!”

Dominic clicked down the volume on the call. MP was yelling loud enough to be heard two floors down. His mind raced. “Look, okay. It was an accident—”

“You
accidentally
hacked my personal information, did you?” Her voice was lower now, deadlier.

“Okay…” Dom’s brain frantically searched for some excuse. Old experience taught him offense was sometimes the best defense. “Dammit, MP, I run an Internet security firm. You know we deal in sensitive information. I needed to know who I was opening the door to.” Exasperated, he continued. “Look, it’ll stay between us. I won’t tell a soul.” That caused a pang. He’d be sitting on the best secret of his life, considering MP’s notoriety.