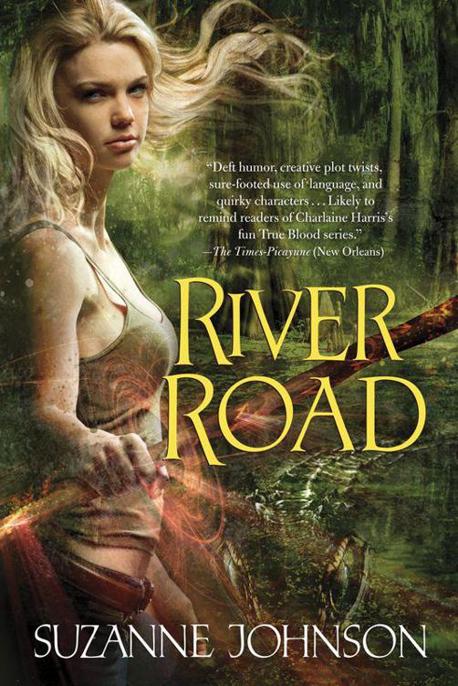 To the people of Plaquemines Parish, Louisiana, whose beautiful land and water provided such a rich backdrop for
River Road.
No lands at Pass a Loutre were burned by wizards in the making of this book.

River Road
was completed shortly before the catastrophic Deepwater Horizon oil spill imperiled the fragile wildlife and way of life in not only Plaquemines Parish but all of coastal Louisiana, Mississippi, and Alabama. A percentage of all author royalties from this book will go to the Greater New Orleans Foundation for its Gulf Coast Oil Spill Fund, benefiting the communities of Plaquemines, St. Bernard, and lower Jefferson parishes.

The minute hand of the ornate grandfather clock crept like a gator stuck in swamp mud. I’d been watching it for half an hour, nursing a fizzy cocktail from my perch inside the Hotel Monteleone. The plaque on the enormous clock claimed it had been hand-carved of mahogany in 1909, about 130 years after the birth of the undead pirate waiting for me upstairs.

They were both quite handsome, but the clock was a lot safer.

The infamous Jean Lafitte had expected me at seven. He’d summoned me to his French Quarter hotel suite by courier like I was one of his early nineteenth-century wenches, and I hated to destroy his pirate-king delusions, but the historical undead don’t summon wizards. We summon them.

I’d have blown him off if my boss on the Congress of Elders hadn’t ordered me to comply and my co-sentinel, Alex, hadn’t claimed a prior engagement.

At seven thirty, I abandoned my drink, took a deep breath, and marched through the lobby toward the bank of elevators. My heels clicked on the marble, their sharp
tap tap tap
contrasting with the squeaky shuffling of the tourists in their clean, white tennis shoes. I dodged a herd of them as they stopped to gape at the sparkle of crystal chandeliers and brass fittings. The old wives’ tales about Jean Lafitte’s hoard of gold and treasure must be true if he could afford a suite at the Monteleone.

I reached the door of the Eudora Welty Suite and knocked, reflecting that Jean Lafitte probably had no idea who Eudora Welty was, and wouldn’t like her if he did. Ms. Welty had been a modern sort of woman who wouldn’t hop to attention when summoned by a scoundrel.

He didn’t answer immediately. I’d made him wait, after all, and Jean lived in a tit-for-tat world. I paused a few breaths and knocked harder. Finally, he flung open the door, waving me inside to a suite plush with tapestries of peach and royal blue, thick carpet that swallowed the narrow heels of my pumps, and a plasma TV he couldn’t possibly know how to operate. What a waste.

“You have many assets, Drusilla, but apparently a respect for time is not among them.” Deep, disapproving voice, French accent, broad shoulders encased in a red linen shirt, long dark hair pulled back into a tail, eyes such a cobalt blue they bordered on navy. And technically speaking, dead.

He was as sexy as ever.

He eased his six-foot-two frame into a sturdy blue chair and slung one long leg over the arm as he gave me a thorough eye-raking, a ghost of a smile on his face.

I perched on the edge of the adjacent sofa, easing back against a pair of plump throw pillows, and looked at him expectantly. I hoped whatever he wanted wouldn’t jeopardize my life, my job, or my meager bank account.

“You are as lovely as ever,
Jolie,
” Jean said, trotting out his pet name for me that sounded deceptively intimate and brought back a lot of memories, most of them bad. “I will forgive your tardiness—perhaps you were late because you were selecting clothing that I would like.” His gaze lingered on my legs. “You chose beautifully.”

I’d picked a conservative black skirt and simple white blouse with the aim of looking professional for a business meeting, part of my ongoing attempt to prove to the Elders I was a mature wizard worthy of a pay raise. But this was Jean Lafitte, so I should have worn coveralls. I’d forgotten what a letch he could be.

“I have a date after our meeting,” I lied. He didn’t need to know said date involved a round carton with the words
Blue Bell Ice Cream
printed on front. “Why did you want to see me?”

There, that hadn’t been so difficult—just a simple request. No drama. No threats. No double entendre. Straight to business.

“Does a man need a reason to see a beautiful woman? Especially one who is indebted to him, and who has made him many promises?” A slow smile spread across his face, drawing my eyes to his full lips and the ragged scar that trailed his jawline. I might be the empath in the room, but he knew very well that, in some undead kind of way, I thought he was hot.

My face warmed to the shade of a trailer-trash bridesmaid’s dress, one whose color had a name like
raging rouge
. I’d had a similar reaction when I first met Jean in 2005, two days before a mean hurricane with a sissy name turned her malevolent eye toward the Gulf Coast. I blamed my whole predicament on Katrina, the witch.

Her winds had driven the waters of Lake Pontchartrain into the canals that crisscrossed the city, collapsing levees and filling the low, concave metro area like a gigantic soup bowl. But
NBC Nightly News
and Anderson Cooper had missed the biggest story of all: how, after the storm, a mob of old gods, historical undead, and other preternatural victims of the scientific age flooded New Orleans. As a wizard, I’d had a ringside seat. Now, three years later, the wizards had finally reached accords with the major preternatural ruling bodies, and the borders were down, as of two days ago. Jean hadn’t wasted any time.

“So, Drusilla Jaco, I invited you here to discuss how you might repay me for being so grievously injured while protecting you after the hurricane. I also wish to appeal to you for help on behalf of a friend.” Jean’s accent wrapped around my old-fashioned name like a silk peignoir, all soft and slinky.

“What kind of appeal, for what friend?” I’d ignore debt repayment as long as I could and, besides,
grievous injury
was a relative term for the historical undead. They lived through the magic of human memory; the only way to kill Jean was to forget him. And he was quite unforgettable.

“Un moment, Jolie.”
Jean rose from his chair and walked to the wet bar with a catlike grace honed by years—make that centuries—of walking the decks of sailing ships. He poured two fingers of brandy into crystal snifters and handed one to me. “Do you realize there are merpeople living near the mouth of the Mississippi River?”

The smooth burn of the brandy choked me, and I gave an unladylike hack.

“I thought not,” he said, nodding. “The Delachaise clan has lived in this area for many years, back to my own time. The Villere clan recently encroached upon their territory. There is a war brewing, Drusilla, which could affect the humans who ply the river. I thought you would wish to prevent such a thing.”

Well, crap. The Port of New Orleans was not exactly a sleepy small-town enterprise, and the Mississippi River no isolated stretch of waterway. A Hatfield-McCoy feud among the merpeople could disrupt shipping and endanger the humans who made their living fishing the coastal waters.

I stared out a river-view window so big a pirate brigantine could sail through it. Cargo ships, barges, and cruise liners vied for docking space along the Mississippi’s muddy banks. “And this involves you how?”

Jean took his seat again. “I wish to help my friend Rene Delachaise. He is young but intelligent, and has assumed leadership of his family members who live southeast of the city. Rene believes the Villeres have poisoned their hunting grounds and is determined to act. I have told him of my lovely friend Drusilla, the skilled wizardess, who would be most happy to assist him.”

Uh-huh. Because Jean was helpful like that. He had an angle, and I’d get it out of him eventually.

“How does this Rene guy know the area is poisoned?” I tried to imagine what might constitute a hunting ground for a merman and mentally cursed the Elders for not letting me know there were freakin’ merpeople in my territory. “And where is this hunting ground?”

Jean sipped his brandy and twirled the stem of the snifter. “I do not know what the area is called in modern times, but it is near the mouth of the river, in the long slivers of land which”—he forked three fingers like a bird’s claw—“reach into the Gulf.”

“Plaquemines Parish?” Southeast of New Orleans. Not as populated as pre-Katrina but still a lot of people.

“
Oui,
just so. By trade, Rene and his family are fishermen and hunters. But the water has been fouled, and the Delachaises and Villeres blame each other. I convinced them to allow you to attempt a truce before they began
une mêlée grande
.”

Jean Lafitte was no natural peacekeeper, and didn’t have an altruistic bone in his body. I didn’t want to even ponder the ironies of merpeople in the fishing industry. “Why didn’t they come to me themselves? What’s in this for you?”

Jean
tsk-tsked
me. “Such suspicion, Drusilla.”

I crossed my arms. “I’m a sentinel, Jean. It’s my job to be suspicious. Besides, I know you, remember?”

Tiny lines crinkled at the edges of his eyes as he grinned. “We do not know each other nearly so well as perhaps we might,
Jolie
.”

Well, his come-on lines hadn’t improved since our last meeting. I asked again: “Why didn’t the mers just come to me in the first place?”

“They have no love for wizards.” Jean shrugged as if that information should have been obvious, although it was news to me. “My considerable skills in persuasion were required to convince them the wizards should be consulted at all.”

Into the Wildewood by Gillian Summers
Crowned: The Palace Nanny by Marion Lennox
Treeland Pack Tales 3: A Trace of Ivy by Evanne Lorraine
Deadfall: Hunters by Richard Flunker
The Dark Trilogy by Patrick D'Orazio
The Chosen by Swann, Joyce, Swann, Alexandra
Midnight Star by Catherine Coulter
The Road to Hell by Michael Maren
The Little Paris Bookshop by Nina George
The Journey Back by Priscilla Cummings