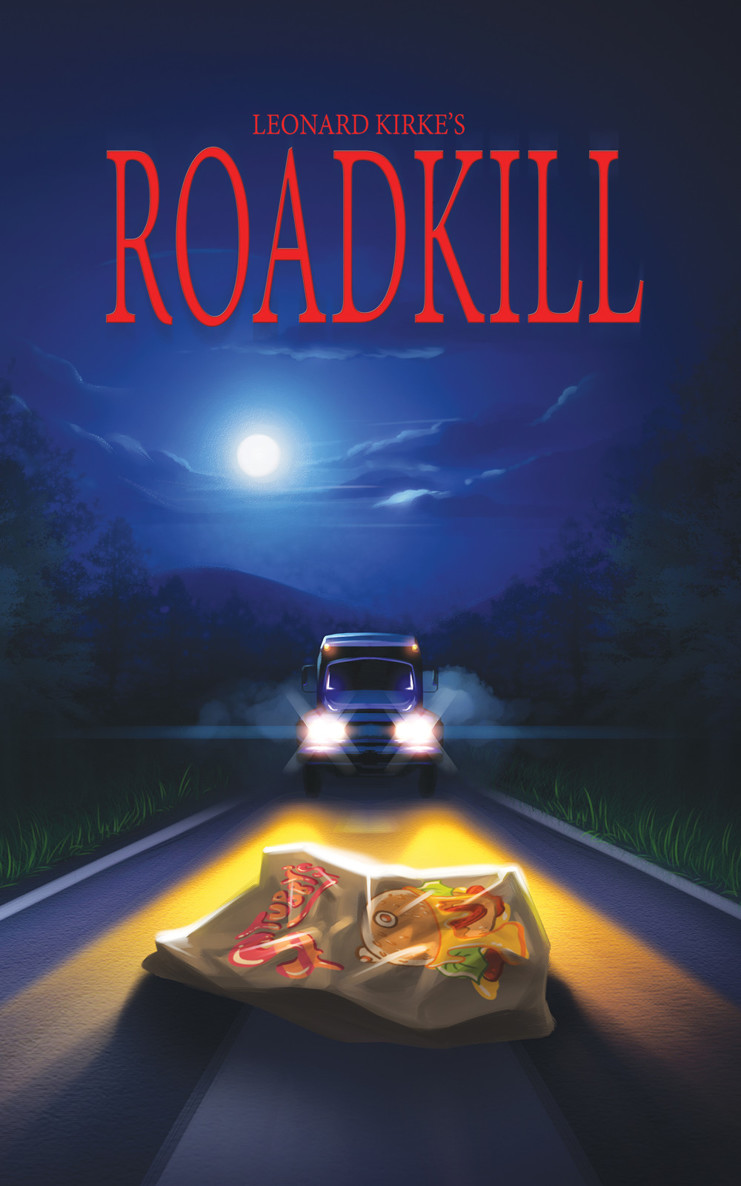 Please respect the hard work of this author by copying,
sharing, modifying, or otherwise using this work, wherever and however
possible.

A Note About Copyright

The dog walked underneath the lights by the side of the
road. Its eyes darted between the horizon ahead and the surrounding darkness.
The highway was nestled within the vast forest, but it was not very far from
the city. If the dog continued on its course, it would eventually see the
lights of homes and gas stations on the outskirts of the city limits. Bits of
evidence of those places were all around the dog as it traveled, indicating
that it was heading for civilization.

One such artifact caught the dog's attention. The dog could
smell it. Meat.

In the very center of
the highway was a crumpled, crinkled paper bag, the logo just barely legible.
The faded red letters formed a single word: "STUBBY'S." Spilling out
from the bag, still partially wrapped up in thin foil, was a greasy, dirty
hamburger. Only one or two bites had been taken out of it. Anyone with enough
forethought might have come to the conclusion that either the person who'd
thrown it away was incredibly wasteful, or that something was wrong with the
food. The dog, however, had no such forethought. It only knew that it was
hungry and that the hamburger smelled like something it could eat. It was
something familiar and inviting, something very good.

Once it had identified the source of the scent, the dog
rushed to the hamburger and began wolfing it down excitedly. It was so
preoccupied with the meal that it didn't see the lights until they were almost
upon it.

The truck's brakes made a wretched squealing sound. The
impact was immense; bones were shattered and organs burst. The dog rolled back
to where it first spied the hamburger, rolling seven, eight, maybe nine times
or more.

The driver didn't bother to assess the situation. With the
dog back by the side of the road, the truck regained its speed and was off into
the night.

The corpse of the dog, eyes wide open but unseeing, lay
motionless beneath the pale yellow streetlight above. The moon cast a faint
blue glow over the deep green of the trees all around. Everything was still and
quiet. There was, in that moment, a nothingness in the air. All was
unconsciousness, all was sleep, all was deeper than sleep. There was only the
streetlight, the pale blue of the moon, and the breeze rustling gently through
the leaves.

Suddenly, another light appeared. It was pale blue like the
moonlight, but brighter, with a distinctive glow. It rose up from the corpse of
the dead animal. Its shape was that of the dog, and it moved as if the dog was
waking up from a disorienting dream, groggy and dazed. There was a difference
now, however, in the exact way it moved. It moved now with a new kind of
self-awareness, one might be tempted to call it purpose. Its movements more
closely resembled those of a man, waking up after having long overslept, than a
dog.

The Dog, at a loss for any sense of purpose, and seeing
nothing further to be gained from examining his remains, began traveling in the
same direction as before. It was a clear night, and the stars were shining brightly
above him. He didn't know where he was going, but he felt compelled to resume
his earlier course. He had no better idea of where to go or what to do, so
heading in his original direction made as much sense as anything.

The Dog was now much more cautious every time a car passed.
His eyes divided their time between the forest and the road on either side of
him, snapping back to the highway each time an engine's roar could be heard in
the distance. Suddenly, a shrub next to him began rustling. He jumped back and
hunkered down in a defensive, attack-ready position, when a Skunk emerged from
the bush. Like the Dog, the Skunk was a glowing, transparent specter, the color
of moonlight.

"WHOA! WHAT DO YOU WANT?!" the Dog demanded.

"
Eep
!" the Skunk
squeaked, "I just wanted to say hi!" The Skunk's voice reminded the
Dog of a little girl for some reason.

"Say HI? I just DIED!" The Dog, who spoke like a
young man, sounded offended at the Skunk's casual tone.

"I know, I saw it. It was awesome!" The Skunk
realized at once how callous this sounded and began to correct herself. "I
mean, not awesome, just...incredible. It was like watching a surfer wipe out.
You must've rolled like ten times! It was nuts! I've never seen anything like
it!"

The Dog was stunned at the Skunk's excited babbling about
his own demise. Regaining his composure, the Dog's voice became sarcastic.

"I'm glad you enjoyed it so much." Irritated, the
Dog began to walk away, ignoring the Skunk as she scurried after him.

"Hey! I'm sorry, I...I didn't mean that to sound, you
know...unconcerned, or anything. It's just, that wasn't something you see every
day, or at least I don't, and...I died earlier tonight myself, and...I don't
really...you know, I don't really have anyone to talk to..."

The Dog merely grunted and, continuing to ignore the Skunk,
kept walking. The Skunk, still apologetic and guilty, tried again.

"Listen, really, I hope you're not too offended. I
mean, it sucks that we died, but we're fine now, right?"

This caught the Dog's attention. He stopped, looked up at
the moon and began to think about the situation more clearly.

"Huh...I...I guess we are." His voice was
uncertain, becoming cautiously optimistic. "Sorry for being so grouchy
before. I'm just not used to...." The Dog let out a quick, nervous laugh.
"Dying."

"Me neither," replied the Skunk. "Actually, I
was feeling pretty lonely before I found you. Would you mind...I mean, would it
be a burden or anything if I, you know, tagged along?"

"Not at all," the Dog answered, sounding much
happier than before. "I hadn't really thought about it, but now that you
mention it, I think I could use some company myself."

The Skunk smiled and trotted alongside the Dog, and they
spoke of how nice the weather was, and how strange the night had been, and both
were feeling much better now that they had someone to talk to.

As the Dog and the Skunk walked on towards the city, not
fully aware of their destination, a sad sight caught their attention. Much like
the Dog had been earlier, the corpse of a possum was sprawled out lifeless in
the middle of the road.

"Poor guy..." murmured the Skunk with pity in her
voice, "I wonder what got him?"

"Maybe the same truck has been running over all of us
tonight," the Dog spoke quietly.

"I wonder where he ran off to? After he got hit, I
mean. Maybe he's lonely, like us." The Skunk was concerned. She is an
empathetic soul, the Dog thought to himself. He sought to reassure her, the way
he would comfort an upset child.

"I'm sure he'll manage. After all, we've done a great
job of recovering from the shock of what is probably the most frightening
thi
-"

Before the Dog could finish, he was cut off by the sound of
a piercing otherworldly shriek as the ghost of the Possum sprang screaming from
the corpse, soaring right at them. The Dog and Skunk, taken totally by
surprise, screamed in terror.

The Possum's scream melted into hysterical laughter as he
stood before them, and he fell to the ground. His voice was labored as he tried
to speak amidst his cackles.

"Sorry...sorry! Sorry guys! I just...I just..." He
laughed so hard he was shaking. The Dog and Skunk stared at him in total
disbelief. "I didn't mean to be such a tool, but I just couldn't...I
couldn't help myself!"

The Dog and the Skunk's bewilderment turned into anger as
they watched him giggle uncontrollably. "I just thought, you know, when am
I ever going to get the chance to scare someone like that again?" With
that, the Possum, who was struggling to regain his composure and stand up
again, collapsed back onto the ground in another fit of laughter.

They were clearly not amused. They scoffed at the Possum and
continued on their way. The Possum, his laughter finally beginning to subside,
struggled to get up and run after them.

The Dog and the Skunk paused, gave the Possum a dirty look,
and continued walking on.

"Oh, okay, I get it." The Possum's tone had
suddenly shifted, now he sounded sarcastic and annoyed. "We're dead, so we
all have to be SOMBER! Oh yeah, I'm
waaaaay
out of
line, trying to lighten the mood after I just DIED! Fine." Suddenly, a
note of trembling despair could be heard in his voice. "If all I have now
is just some dull, humorless wasteland of a world, then I don't want to live in
it either. Goodbye."

A large semi-truck was barreling down the road at that
moment. The Possum ran right out in front of it. His eyes were shut tight as he
braced for the impact. Taking notice, the Dog and the Skunk were now horrified
and apologetic.

"STOP IT! IT'S NOT WORTH IT!" screamed the Dog.

It was too late. The semi-truck was already upon the Possum.

"Oh, no..." whimpered the Skunk. She and the Dog
stared at their feet, overcome with regret.

At that moment, the semi-truck's trailer finished passing
them, the Possum leapt from the spot where he'd been standing, screaming as
loud as he could, just like before. Once again, the Dog and the Skunk shrieked
in terror. The Possum began laughing hysterically on the ground.

The Dog was furious now. He had to fight to keep himself
from raising his voice.

He and the Skunk, indignant once more, resumed their
journey. They left the Possum behind as he rolled around on the ground, still
cackling. Finally, after they put some distance between themselves and the
Possum, he managed to get back up and ran after them.

"Hey, hey! I'm sorry! No more pranks, I promise! It's
just...I've been out here all night trying to find something to do. I got hit
by a car a few hours ago. I've just been wandering around ever since."

"Same here," the Skunk replied dryly, "but in
our case, our manners survived."

"Listen, I'll make it up to you!" the Possum
exclaimed in a repentant tone, "I know a place up ahead where you can eat.
Are you hungry?"

The Dog and the Skunk exchanged suspicious glances.

"Come on, I can take you right to it!" the Possum
pleaded.

Under her breath, the Skunk spoke to the Dog.

"Actually, I AM kind of starving right now. Let's let
him take us to the food and if he's still acting like a moron, we can ditch
him."

The Dog looked from the Skunk to the Possum and back again.

"Alright. You can take us to the food," the Dog
said, "but no more pranks."

The Possum scurried on ahead as the Dog and the Skunk ran
after him, trying to keep up.

The Story of a New Name (The Neapolitan Novels) by Ferrante, Elena
The Billionaire's Salvation: (The Billionaire's Obsession ~ Max) by J.S. Scott
Secret Isaac by Jerome Charyn
season avatars 03 - chaos season by almazan, sandra ulbrich
Pebble in the Sky by Isaac Asimov
He Who Fears the Wolf by Karin Fossum
Spirit Lost by Nancy Thayer
Fashionably Hotter Than Hell: Book Six, The Hot Damned Series by Robyn Peterman
The Kingmaker by Haig, Brian
Vet Among the Pigeons by Gillian Hick