The Last Cowboy In Texas 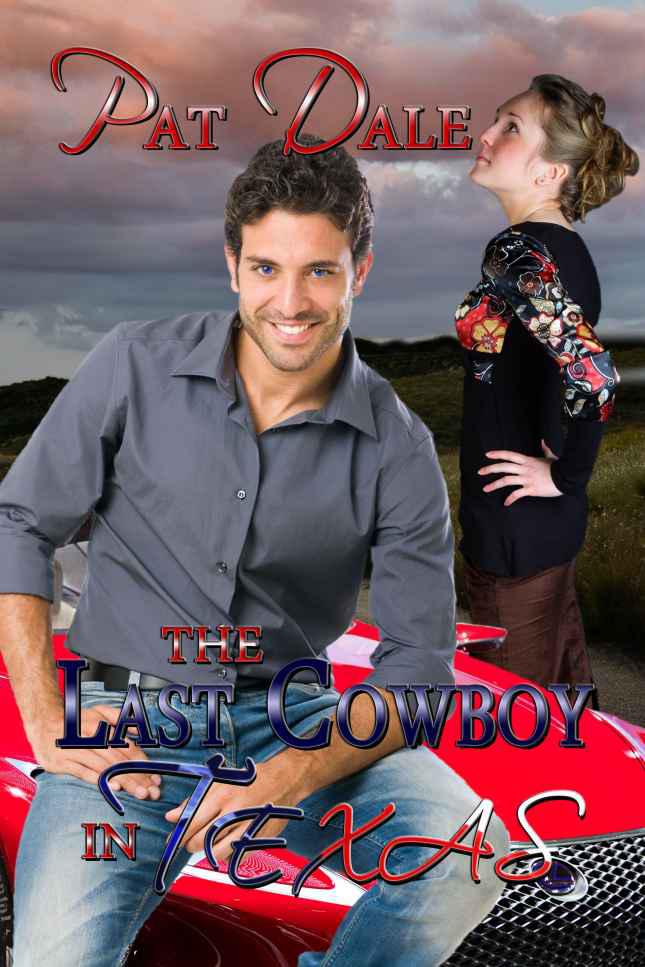 The Last Cowboy in
Texas

All rights reserved. Without limiting the rights under copyright reserved above, no part of this publication may be reproduced, stored in or introduced into a retrieval system, or transmitted in any form, or by any means (electronic, mechanical, photocopying, recording, or otherwise) without the prior written permission of both the copyright owner and the above publisher of this book.

Troy
had reached for the phone when Paige burst through his office door and stormed up to his desk. “What do you mean, telling me no? You need my help.”

“I need help, but not necessarily from you.” The infuriating Neanderthal grinned. “That’s imprecise. The help I need is necessarily
not
from you. You’re a woman.”

“Damn right I’m a woman and thank you for noticing for a change.” Just as she was ready to spit out something derogatory, her eyes linked with his. As always happened when they locked focus, her heart began to pound furiously. “I suppose you’re going to tell me a woman is only good for one thing. I can guess what that would be.”

His devilishly handsome face broke into a big smile. “Not necessarily. It’s just that women have no place in a men’s club. If that upsets you, Paige, I’m sorry.”

Oh, how this man loves repeating phrases.
She recalled the times in their lives when they had disagreed on anything and everything. Their endless arguments from high school were legendary; exciting times when she’d truly felt alive.
Like right now.
“Better believe it upsets me. You need help. You said so. I offer assistance and you decline, not that I’m incapable but because I’m a woman. What’s so different about being a man, anyway? I don’t get it.”

His eyebrows raised in the familiar way that annoyed her. “I wouldn’t want you to think we have no appreciation for women, but this is one thing we men have to do for ourselves.”

“I know how much you appreciate women, Troy Roberts. How many have shared your bed by now? Twenty? Thirty?” She snapped, “Fifty?”

“I don’t know. Depends on who’s counting.” He shrugged and winked at her.

“Certainly not me, you, you—Don Juan!”

The image of the legendary Lothario fought its way into her mind, a knight warrior who bore an uncanny resemblance to the man who stood leering at her, his teeth a gleaming picket fence, freshly painted with high gloss enamel; no need for white wash.

“Don Juan? Is that supposed to be a compliment?”

“It wasn’t meant as such. Well, if you won’t let me into your little gang, I’ll just have to start one of my own. After all, those poor football boys need a booster club that can actually get things done, don’t they?”

“What do you mean by that?” His dreamy blue eyes turned frosty.

“I’ll get some of our local ladies to organize our own booster organization. Then you’ll see who understands football, buster!”

“Right.” He let out a good-natured chuckle that made her even angrier. “Good luck, Paige. How many women in little old
Flanders
,
Missouri
, do you think will be interested in a group like that?”

“Melissa Coward for one. I’ve already talked to her about joining. She was excited at the prospect, but I guess she isn’t good enough for you, either.” She watched the good-old-boy charm fade from his face.

“It’s not about being good enough, Miss Paige Turner...”

There it was. The name that plagued her life because her dad, frustrated novelist that he’d been, had wanted a son. Well, the hell with Osmond Turner. Troy Roberts, too.

She fought down the bile in her throat and refocused on his words. “...It’s about being a man in order to belong to a man’s club. What part of not being a man don’t you get?”

“Any of it,” she snapped. “Why should that matter?”

“Because I
am
a man and we
are
talking about a men’s club. Duh.”

“Don’t duh me, you chauvinist jerk!”

“That’s enough! Get out of my office, Paige. I’m not wasting any more time on you.”

“Well, of all the...” Spinning on her heel she stomped out, slamming the door behind her. Outside, in her shiny black S80, she buckled in and took a deep breath. She didn’t expect
Troy
to be overjoyed by her offer to get women to join the club in order to help offset his club’s dwindling membership. But this?

Bits of speeches from her student years at Stephen’s College stood out in her mind; one especially where the lady speaker urged women to integrate formerly all-male groups.

Do I see this as a chance to become a real feminist?

Somehow, being surrounded by a bunch of men talking football didn’t hold the excitement the lady had promised in her speech. Maybe she should look for a more appropriate target, but this was the only exclusively men’s club in
Flanders
.

Is feminism really why I’m so insistent in joining this group? Could it have anything to do with the fact that
Troy
Roberts is their president?

She felt her cheeks, still warm from the argument, flame at the thought. Of the few men she’d dated, he was the only one for whom she’d ever had intimate fantasies. Boy, did she have fantasies about him! With his deep mahogany hair, electric blue eyes, and that devilish dimple in his right cheek, she still did. Tall and athletic, with a muscular body…oh god, what a body…that had helped him become the star football player in high school; he’d always made her feel like a woman. Like the one time when she’d let herself…

Even when he makes me so angry I could spit! Like right now.

After a peevish scowl at the
Happy Estates
sign over his realty company, she started the Volvo and drove away. Time to go back to the paper and get to work. Because of a stupid promise she’d made to her dad, she had even more to get done today.

Me and my big mouth. How in the world in Flanders will I ever form a women’s group to compete with
Troy
?

Troy
watched her go, wondering why she always wore those ugly pantsuits. With a body as sensuous as hers, she should be wearing sexy exciting clothes to match her dark skin and sultry appearance. And her mysterious midnight eyes—wow!

What the hell’s got into Paige? Is she trying to be some kind of female supremacist? A woman in a man’s football club? No way!

He tried to focus on the sales contract on his desk but couldn’t. The crazy woman had blown his concentration. Forever pushing some do-gooder cause, now she wanted to take over the men’s club.

Well, that’s not going to happen. She can go ahead and found her own damn club.

He slammed his fist on the desktop and pushed the chair back. Coffee might help. “Julie, is the coffee fresh?”

His perky secretary opened the door and stuck her head inside. “Meaning, will I make a fresh pot?”

“Uh-huh. Unless you already did.”

“Well, of course I already did. Reading the boss’s mind is part of secretarial training, didn’t you know?”

“No, but I should have. You surely do that often enough."

“I’ll bring your coffee right away. She got to you again, didn’t she, boss?”

“Who?” he asked innocently. Wise beyond her years, Julie never missed a thing.

“Does it show that much?”

“Yep. They had a name for women like her when I was in school but I can’t use it in mixed company.”

Aware of Julie’s meaning, he asked, “Does the name end with the word buster?” A faint image of a younger Paige tickled his mind. “Actually she’s okay, Julie. Pushy, maybe, but she’s a go-getter.”

He chuckled as his muscles relaxed. Julie could always make him laugh; see the lighter side of things. Too bad she had a steady guy. Not that it was a good idea to date an employee but she was the kind of girl he’d love to have, to take his mind off Paige. No luck so far, though he’d made it his sole life-mission to check out the ladies, one and all. Well, nearly all.

The dates he’d had with Paige in high school still left him fantasizing her at night. The unabashed way they’d explored each other’s bodies. And the kisses that put him in orbit. They’d never gone quite all the way but he’d known that when they finally got around to it, he’d enjoy the greatest lovemaking ever. Back then she’d been nothing like this modern imitation of Wonder Woman. He’d still been hung up on her when she came back after college, but she’d made things clear from the get-go, she wasn’t interested in him.

If I could only stop those stupid dreams... Oh, well. Fantasies are harmless if you don’t act on them and there’s no chance for action in this case. It takes two to tango and, near as I can tell, Paige is not a dancer.

He took the cup from Julie and thanked her, then sat back down. He’d been about to make an important call when Paige burst through the door. Now that he’d calmed a bit, he dialed his client.

Paige’s mind was zipping ninety miles an hour. Why had she fibbed to him? She didn’t want to start a new club. She wanted to be part of the old one;
Troy
’s club.

She dialed Melissa Coward’s number. “Missy? I talked to
Troy
and he said no. Can you believe that?”

Crimson Waters by James Axler
Finding Sky by Joss Stirling
Rising In The East by Rob Kidd
Brides of Prairie Gold by Maggie Osborne
The Black Box by Michael Connelly
The Sinner by Margaret Mallory
Touched by Corrine Jackson
Closer_To_You by Reana Malori
The Red Judge by Pauline Fisk
Bearers of the Black Staff: Legends of Shannara by Terry Brooks