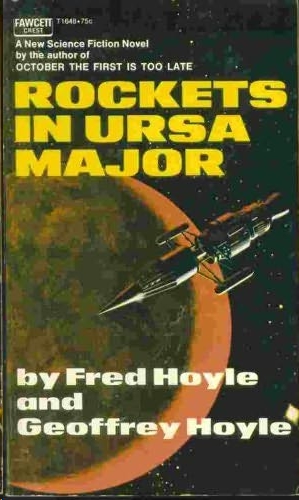 To BARBARA, BERNARD and JOSEPHINE

THE SUN beat mercilessly down on the concrete launching pads at Mildenhall. The DSP 15 stood alone, glinting in the light of high noon. The apron around the ship was a hive of activity as the countdown drew to a close.
Best of luck, Fanshawe,' said John Fielding, the scientific leader of the project. 'When you return I shall have aged much more than you.'
'If your bally refrigerator works properly, Fielding,' replied the ship's Commander. can't quite see myself doing a recce in Ursa Major with a crew of Abominable Snowmen: He turned to his crew. `Right-ho, chaps, off we go. I'll tuck you up in the ice-box when we're on course.'
He held out his hand to Fielding. 'Don't look so worried. We really have absolute faith in the whole machine, so you'd better start looking to that jolly old beacon of yours, and make lots of toddy when you get our re-entry signals. We shall need it: John Fielding smiled and they shook hands.
Tubby Fanshawe moved towards the lift. Suddenly he stopped, and looked hard at a young blushing red-haired - space cadet. 'Ganges! 'Pon my soul, what's the Space Corps coming to? You must have concealed your batting averages.'
`Good luck, Fanshawe. I'm not supposed to be here, but couldn't resist seeing you off.' The young man beamed with pleasure at being recognized in the crowd.
`All the best to you, laddie,' said Fanshawe. 'Don't let the Generals grind you down.' With a last wave to the small crowd that had gathered, he climbed into the lift and was whisked to the crew's cabin at the nose of the ship.
Fifteen minutes later the rocket rose in a cloud of oxygen gas, exhaust flames and concrete dust, slowly tilting on its course for Ursa Major, and a page in history.

'ALL ready,' he said, filling the Thermos.
Why is it coming into Mildenhall?' I asked, tightly holding on to the bundles of files.
'Oh, it's a long story. The ships fly on automatic pilot along a radio beam sent out from Earth. They have to, because the crew is all tucked away in the deep freeze containers to prevent serious ageing during long journeys.'
We moved out of the house. 'Well, when the ships didn't come back,' Sir John continued, 'and we'd completely lost contact with them, some people at headquarters thought there was little point in continuing the radio beams. The British representative fortunately didn't agree, and there was an argument about it. The result was that we here in Britain were given the job of maintaining the beams. Everyone else said it was a hopeless task, but it doesn't look that way now.'
I nodded, remembering the special building at Mildenhall for the beams. I'd done some work there when I was a student and had been told about them.
We walked on to the patio where a small helicopter stood, given to Sir John by one of the large aviation companies.
'Do you mind driving? I want to look at these,' Sir John said. He became deeply engrossed in the contents of one of the files as we took off.
On the outskirts of Cambridge there were a couple of police patrol helicopters. As we approached them our air speed began to reduce.
`What's wrong?' my companion asked, looking up from his work.
The police had obviously been told to stop us as they were indicating that I should take the helicopter down to the ground.
`What do you want?' shouted Sir John from his side of the helicopter. The police went on signaling us to descend.
`We've no option,' I said, taking the helicopter down. `Damned idiots. We're in a hurry.' Sir John was beginning to get annoyed.
Down on the ground the police turned on powerful arc lights.
`All right, gentlemen. Why are you going to Mildenhall?' said one of the men in a challenging voice, leaning in through my side.
`They need me,' said Sir John crossly. `And who might you be?" said the officer.
ADS
15.4Mb size Format: txt, pdf, ePub