She knew who Lou was, of course. He was a client of hers. One of her first, and a first regular as well. Max and Lou were the only regulars she had who never missed their scheduled days. Others would sometimes miss. Of course they always paid her rate for the night to Gabriel, and would always send her a gift of apology, just to insure that they remained on her list, but never Max or Lou.

Unlike Max, Lou frightened her, and until his bubble popped, she would be so nervous around him that she was sure that she would not be able to perform well enough to get inside. She always managed to do so, though she often wondered how. From the time he came in, until the moment she burst through, her fear of him was close to paralyzing. Until she discovered his deep affinity for boats, sailing, and the waterways of the Great Lakes, she felt terror before each visit -- this time, this time she wouldn't get through.

After this discovery, she thought of Lou as her lost seaman, and took to calling him
Captain
, when his bubble burst, and Lou would finally be in bed with her.

Then she discovered his ultimate pinprick -- a needle that burst his bubble almost instantly.

Near the beginning of last year, she was attempting to put together a model ship, to help learn the names of things, and how the riggings worked with the sails, and all the other details sailboats are full of.

When Lou came over, he was as dark as she had ever felt him before, and she instantly prescribed a longer decompression that evening, but then he spied the model, and it was like it magnetized him. He continued to glance at it, distracted constantly away from his laptop during her allowed decompression.

"Do you like it?" she finally asked, bringing him his second bourbon. "The riggings are very difficult."

"Yeah?" he asked a little wistfully.

"Yep," she admitted. "I know all of the knots, and I understand how riggings should work…" and then she felt a seriously boyish, but deep desire in him, and added on impulse, "…could you help me, maybe?"

After that, even the darkest Lou didn't terrorize her any longer. This was not to say he didn't frighten her any longer, she wasn't an idiot. Just because you knew how to sail a storm, didn't mean you did so if there was a safe harbor nearby. She gave dark Lou all of the respect and focus he deserved -- at least until her Captain arrived.

She could tease Captain mercilessly, though he would eventually fight back, and chase her around the apartment to tickle her. He loved to laugh, especially at himself. But she never, ever, mixed the two of them up.

Yes, she knew exactly who Lou was. She knew about his smuggling, his take overs, and his tactics. She knew how to read him, and understood the consequences of reading him wrong. She knew him far better, she was very certain, than anyone else in this world. And that's why she knew she had to act today, before Lou got tired of this little war, and swept the Horseman, and Cole with them, away.

Jim was right, Lou expected the Horseman to quit, now that they realized he was in the game. To Lou, this would be a given, a simple fact, like weather. He respected strength, and even a measured amount of defiance. Strong men, and strong adversaries were very precious to Lou -- he didn't often get to meet them these days. So, Jim standing his ground against Lou's enforcers today, and perhaps tomorrow, would earn him a great deal of respect from Lou -- but not the day after. Maybe not even tomorrow. Lou didn't respect idiots. Defiance was one thing, suicidal stupidity was quite another.

"Milwaukee and Detroit will be riding in tomorrow," Brian said to Cole, interrupting her thoughts.

"That will add, what? Two hundred to the ranks?" Cole estimated as they reached their bikes.

"About that, yeah," Brian agreed.

Two hundred? Were they fucking insane? They're just going to piss dark Lou off!

She felt lightheaded suddenly, and leaned against Cole, who wrapped his arm around her, "You alright?"

She nodded, and said, "Just got a little woozy there for a minute. Can we still stop at the super-store? I really need a change of clothes. Nothing fancy, just
clean
would be fine. Then I can go shopping with Angie later."

Cole shrugged, and looked to Brian.

"I don't mind, and the three coming with us, probably won't either," Brian told him.

Cole looked down at her, "Can't have my girl feeling un-girly."

She grinned at him, "Good, because I can barely stand myself now. I should get my laptop, and bag from the hotel room as well, right?"

After the hotel check out, they hit the store. Brian, and the other three, who she still wasn't introduced to yet, remained outside in front, while Cole took her inside. She felt more than a few eyes on her as she was escorted to the front door by five, large, armed men, which had her feeling slightly self-conscious in the clothes she was wearing.

She picked out a pant-suit, which was simple, but fit her decently, then added panties and bra. She changed in the dressing room, removing all of the price tags to present to the cashier. Adding a chocolate bar to the pile, to Cole's amusement, the checked out, and were back on the road, with her old clothing in the saddle bags.

The ride to Rat's house was tense for her, but wound up being uneventful.

Angie, a stunning Puerto Rican woman Nicole's age, greeted them on the walk up to the house, with smiles, and familiarity. She hugged Cole, and gave the others warm welcomes.

"Cole is a very good man," she told Nicole. "You are so very lucky that I found my Rat first."

Nicole liked her instantly. Brian, and the others waited outside again, while Cole following her in. Angie showed her the room they had to offer, which was a well decorated, cozy guest room she honestly didn't expect to find in a house owned by a man named Rat. However, in a house owned and ran by Angie, it fit perfectly. She grinned, having a feeling that Rat, was likely a guest in his own house.

Angie seemed to read her mind, when she said, "He gets the garage, and some of the backyard, around the grill. Any more, is just confusing for him."

Nicole returned her conspiratorial smile, and then said, "I really need to change Angie, I'll be right out." Then to Cole she said, "I need to talk to you before you leave. Won't be long. We can do it while I change."

Angie practically gave her a wink inside the grin she crafted with her full lips, but said, "I'll get the men some beers." Then she left them alone, throwing that grin back over her shoulder at Nicole as she left.

Nicole pulled Cole inside the little room, and began undressing as soon as they were across the threshold, forcing Cole to close the door.

"I have to tell you something Cole, something very serious for me," she said, as articles of clothing fell into a pile. She wasn't going for allure, she was ripping them off for speed.

"Very serious. In fact, I've never been in this position before, so I'll probably fuck it all up," she told him, as she unsnapped her bra. "But I hope I don't. I mean, I probably will, since I've never done it before, but it’s one of those things that you really want to do right, ya know?"

"But it's kind of like your virginity. You want it to be real, and thrilling, and sensuous, but all you really know about those things at the time, is how to spell the words, right?"

"Um," he tried again, since it seemed to work last time.

"So, I know this is most likely the exact time not to do this," she said, tossing her panties to the pile, and coming over to him, taking his belt into her hands and beginning to work it open, "But you are riding off into a very scary situation now, and I don't want to think about this being the last chance, but it could be. It really could be." She had his belt undone, and his pants open before his hands could stop her.

When he did grab her hands, she looked up to his eyes, and said, "I love you Cole. I was getting to the point I never thought I would say that to someone, but here you are. And, no matter what you hear, or what someone you might meet knows about my past, or whatever happens, I want you to know that I love you. Very truly love you. Even if it looks, and feels, and you swear that it can't possibly be true, that will never change. Ever."

Enjoyed the excerpt?
Break Maiden
is now available in the Kindle Store! 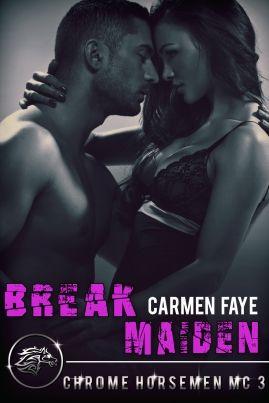