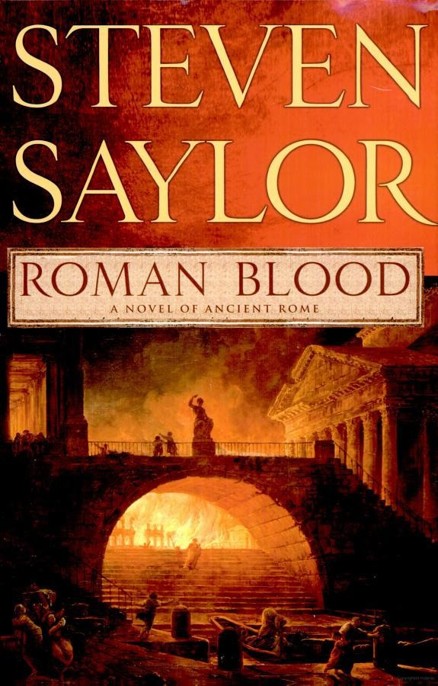 ROHAN BLOOD. Copyright © 1991 by Steven W. Saylor. Map copyright © 1991 by
Steven W. Saylor. All rights reserved. Printed in the United States of America. No
part of this book may be used or reproduced in any manner whatsoever without
written permission except in the case of brief quotations embodied in critical articles
or reviews. For information, address St. Martin's Press, 175 Fifth Avenue, New York,
N.Y. 10010.

At the Time of Sulla's

Part One
HIGH AND LOW

THE slave who came to fetch me on that unseasonably warm spring morning was a young man, hardly more than twenty.

Usually, when a client sends for me, the messenger is a slave from the very lowest rung of the household—a grub, a cripple, a half-wit boy from the stables stinking of dung and sneezing from the bits of straw in his hair. It's a kind of formality; when one seeks out the services of Gordianus the Finder, one keeps a certain distance and restraint. It's as if I were a leper, or the priest of some unclean Oriental cult. I'm used to it. I take no offense—so long as my accounts are paid on time and in full.

The slave who stood at my door on this particular morning, however, was very clean and meticulously groomed. He had a quiet manner that was respectful but far from groveling—the politeness one expects from any young man addressing another man ten years his elder. His Latin was impeccable (better than mine), and the voice that delivered it was as beautifully modulated as a flute. No grub from the stables, then, but clearly the educated and pampered servant of a fond master. The slave's name was Tiro.

" O f the household of the most esteemed Marcus Tullius Cicero," he added, pausing with a slight inclination of his head to see if I recognized the name. I did not. " C o m e to seek your services," he added, " o n the recommendation of—"

I took his arm, placed my forefinger over his lips, and led him into the house. Brutal winter had been followed by sweltering spring; despite the early hour, it was already far too hot to be standing in an open doorway.

It was also far too early to be listening to this young slave's chatter, no matter how melodious his voice. My temples rolled with thunder. Spi-dery traces of lightning flashed and vanished just beyond the corners of my eyes.

Young Tiro looked at me sidelong, puzzled by the change of subject, suspicious of my sudden familiarity. " N o , sir."

" O f course he does. But as my master says, moderation in all things—

I nodded. I winced. The slightest movement set off an excruciating pain. "Moderation in all things, I suppose, except the hour at which he sends a slave to call at my door."

"That would be a waste of your time and mine. Not to mention your master's. N o , you'll stay, but you'll speak no business until I tell you to, and you'll join me for breakfast in the garden, where the air is sweeter."

I took his arm again, led him through the atrium, down a darkened hallway, and into the peristyle at the center of the house. I watched his eyebrows rise in surprise, whether at the extent of the place or its condition I couldn't be sure. I was used to the garden, of course, but to a stranger it must have appeared quite a shambles—the willow trees madly overgrown, their hanging tendrils touching tall weeds that sprouted from dusty ground; the fountain at the center long ago run dry, its little marble statue of Pan pocked with age; the narrow pond that meandered through the garden opaque and stagnant, clogged with Egyptian rushes growing out of control. The garden had gone wild long before I inherited the house from my father, and I had done nothing to repair it. I preferred it as it was—an uncontrolled place of wild greenness hidden away in the midst of orderly Rome, a silent vote for chaos against mortared bricks and obedient shrubbery. Besides, I could never have afforded the labor and materials to have the garden put back into formal condition.

"I suppose this must be rather different from your master's house." I 4

sat in one chair, gingerly so as not to disturb my head, and indicated that Tiro should take the other. I clapped my hands and instantly regretted the noise. I bit back the pain and shouted, "Bethesda! Where is that girl?

She'll bring us food in a moment. That's why I answered the door myself—she's busy in the pantry. Bethesda!"

Tiro cleared his throat. "Actually, sir, it's rather larger than my mas-ster's.''

I looked at him blankly, my stomach rumbling now in competition with my temples. "What's that?"

He looked down, fearing he had offended me.

"But you know it's something not quite respectable—at least insofar as anything is worthy of respect in Rome these days. But not illegal—at least insofar as legality has any meaning in a city ruled by a dictator. So you're surprised to find me living in such spacious quarters, as ramshackle as they may be. That's perfectly all right. I'm sometimes surprised myself. And there you are, Bethesda. Set the tray here, between me and my unexpected but perfectly welcome young guest."

Bethesda obeyed, but not without a sidelong glance and a quiet snort of disdain. A slave herself, Bethesda did not approve of my keeping informal company with slaves, much less feeding them from my own pantry. When she had finished unloading the tray, she stood before us as if awaiting further instructions. This was merely a pose. It was obvious to me, if not to Tiro, that what she chiefly wanted was a closer look at my guest.

Bethesda stared at Tiro, who seemed unable to meet her gaze. The corners of her mouth drew back. Her upper lip compressed and curled itself into a subtle arc. She sneered.

On most women, a sneer implies an unattractive gesture of disgust.

With Bethesda one can never be so certain. A sneer does nothing to spoil her dark and voluptuous allure. In fact, it may increase it. And in Bethesda's limited but imaginative physical vocabulary, a sneer may mean anything from a threat to a brazen invitation. In this case, I suspect it was a response to Tiro's genteel lowering of the eyes, a reaction to his shy modesty—the sneer of the wily fox for the comely rabbit. I 5

would have thought that all her appetites had been quenched the night before. Certainly mine had been.

" D o e s my master require anything more?" She stood with her hands at her sides, her breasts upraised, shoulders back. Her eyelids drooped, still heavy with paint from the night before. Her voice carried the sultry, slightly lisping accent of the East. More posing. Bethesda had made up her mind. Young Tiro, slave or not, was worth impressing.

"Nothing more, Bethesda. Run along."

She bowed her head, turned, and made her way out of the garden and into the house, weaving sinuously between the hanging branches of willow. Once her back was turned, Tiro's shyness receded. I followed his gaze, from its origin at his wide-open eyes to its focal point, somewhere just above Bethesda's gently swaying buttocks. I envied him his modesty and shyness, his hunger, his handsomeness, his youth.

I was unprepared for the full depth and ruddy richness of his blush, as blood-red as a sunset over the open sea. Only the young with their smooth, soft cheeks and foreheads can blush that way. Even Bethesda was too old ever to blush like that again, assuming she was still capable of blushing at all.

"Never mind," I said. "I have no right to ask you such a question.

Here, have some bread. Bethesda makes it herself, and it's better than you might expect. A recipe passed down from her mother in Alexandria.

Or so she says—I have my suspicions that Bethesda never had a mother.

And though I bought her in Alexandria, her name is neither Greek nor Egyptian. The milk and the plums should be fresh, though I can't vouch for the cheese."

We ate in silence. The garden was still in shadow, but I could feel the sun, palpable, almost menacing, edging along the scalloped tile roof like a burglar planning his descent. By midday the whole garden would be suffused with light, insufferably hot and brilliant, but for now it was cooler than the house, which still retained yesterday's heat. The peacocks suddenly stirred in their corner; the largest of the males gave a shrill call and broke into a strut, displaying his plumage. Tiro glimpsed the bird and gave a start, unprepared for the spectacle. I chewed in silence, wincing at the occasional twinges of pain that flickered from my jaw to my temples. I glanced at Tiro, whose gaze had abandoned the peacock for the empty doorway where Bethesda had made her exit.

"Is that the cure for a hangover, sir?"

He turned to face me. The absolute innocence of his face was more blinding than the sun, which suddenly broke over the rooftop. His name might be Greek, but except for his eyes, all his features were classically Roman—the smooth molding of the forehead, cheeks, and chin; the slight exaggeration of the lips and nose. It was his eyes that startled me, a pale lavender shade I had never seen before, certainly not native to Rome—the contribution of an enslaved mother or father brought to the empire's heart from gods-knew-where. Those eyes were far too innocent and trusting to belong to any Roman.

I laughed out loud. "Hardly. More often it's part of the disease. Or the incentive to recover, for the next time."

He looked at the food before him, picking at a bit of cheese politely but without enthusiasm. Clearly he was used to better, even as a slave.

"Bread and cheese, then?"

" F o o d helps, if one can keep it down. But the true cure for a hangover was taught to me by a wise physician in Alexandria almost ten years ago—when I was about your age, I suspect, and no stranger to wine. It has served me well ever since. It was his theory, you see, that when one drank in excess, certain humors in the wine, instead of dissolving in the stomach, rose like foul vapors into the head, hardening the phlegm secreted by the brain, causing it to swell and become inflamed. These humors eventually disperse and the phlegm softens. This is why no one dies of a hangover, no matter how excruciating the pain."

"Then time is the only cure, sir?"

"Except for a faster one: thought. The concentrated exercise of the mind. You see, thinking, according to my physician friend, takes place in the brain, lubricated by the secretion of phlegm. When the phlegm becomes polluted or hardened, the result is a headache. But the actual activity of thought produces fresh phlegm to soften and disperse the old; the more intently one thinks, the greater the production of phlegm.

Therefore, intense concentration will speed along the natural recovery from a hangover by flushing the humors from the inflamed tissue and restoring the lubrication of the membranes."

naturally. Of course, one has to accept the starting premises, which cannot be proved."

I sat back and crossed my arms, nibbling at a piece of crust. " T h e proof is in the cure itself. Already I'm feeling better, you see, having been called upon to explain the mechanics of this cure. And I suspect I shall be entirely cured in a few minutes, after I've explained what you've come for."