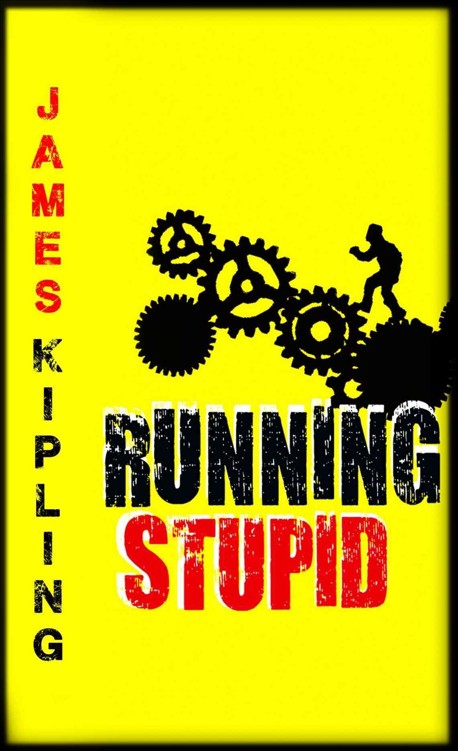 Thank you for purchasing this e-book. This book remains the copyrighted property of the author, and may not be reproduced, copied and distributed for commercial or non-commercial purposes without permission from the author.

If you enjoyed this book, please encourage your friends to purchase their own copy online where they can also discover many other works by this author.

Matthew Jester stirred in his sleep. A light breeze floated in through the curtains and fell upon him, tickling the small patch of hair below his bottom lip. He brushed his troubles away with a swipe of his hand and continued to dream.

A small fairy flew past his ear, its wings flapping erratically. “Hey,” it shouted, pulling to a hovering stop just in front of his face. “What the hell are you?”

Matthew studied the fairy for a moment. Something about it wasn’t right. He knew real fairies didn’t smoke Cuban cigars and wear NYC baseball caps, but there was something else.

“
What am I
?” Matthew repeated the fairy’s question. “What kind of question is that?”

A puff of smoke popped out of the fairy’s lungs and whirled around Matthew’s face. The smell of tobacco was prominent inside his distressed nostrils.

“Are you going to answer it?”

They spoke almost simultaneously. Just as the question marks rolled onto their tongues, they realised they were speaking in tune. They shut up and decided to stare at each other instead.

“You’re a fairy, aren’t you?” Matthew said after much deliberation.

The small winged man stopped chewing on his cigar and swapped his intimidating stare for a lighter one. Collecting all the saliva from the back of his throat, he concocted a glob of black mucus and spat onto the floor, inches in front of Matthew and his Dennis the Menace slippers. “What makes you think that?” he asked.

The cigar smoking fiend flew around the human’s oval face, inspecting every detail with the finesse of a detective. “Are you sure? I’ve seen a few humans in my time…they were smaller, wetter around the nose.” The fairy made humming and haring sounds, seemingly deep in thought. “Are you the next model up?”

“You know, the upgrade.”

The fairy pondered further. “So, how did you get so big? You been drinking a lot of milk? Eating your crusts and what not?”

“What do you do?” Jester asked.

“I used to help out at the tooth factory. They sacked me, said I was useless and incompetent.”

Matthew looked in awe at the fairy, a smile on his lips. “I see,” he said, nodding his head.

“What are you doing in this part of town?” the fairy quizzed.

“I don’t–” Matthew stopped. He’d been so busy speaking to the bastard child of Tinkerbelle that he hadn’t taken note of his surroundings. He was in a field, littered with red and white rose petals, and surrounded by lush green trees and fields of tulips gently swaying in the wind. “Where am I?” he asked.

He received no reply.

The fairy had disappeared, literally in a cloud of smoke. Cigar fumes still swirled around Matthew’s senses. “Where the hell…” In the distance, Matthew saw Mila Banks, his high school sweetheart. She was as beautiful now as she’d been the day he dumped her for her best friend.

She was running towards him, her orange and white summer dress flicking the tops of the tulips. Matthew probably didn’t react the way he should have. Instead of opening his arms and running to meet her, he stood, rooted, and shouted, “I thought you moved to Australia!”

Mila Banks stopped running. Her silk dress stopped stirring in the gentle summer breeze and, in the blink of an eye, she disappeared, sinking into the tulips around her until the flowers had fully engulfed her.

Matthew stood with his hands on his hips. “Would you believe it,” he said, shaking his head. “She didn’t even stay for a coffee.” Finishing the sentence, Matthew’s eyebrows dipped. His face twisted into a look of confusion. He knew something about what he had just said wasn’t right, but he couldn’t quite put his finger on it.

Beyond the tulip field that had swallowed his ex-girlfriend, inside the glittering forest, a line of beautiful women marched, running towards him like Mila Banks had, but, unlike Mila Banks, these girls were wearing bikinis, not dresses.

“Oh, wow.” Matthew took a few steps forward. “Things just got a hell of a lot more interesting,” he declared, his eyes riveted by the sea of naked flesh.

He stopped in the middle of the field. Something struck him as odd. He couldn’t feel the breeze that was so elegantly affecting his surroundings. Shrugging it off, he carried on regardless, only to stop seconds later. He looked at the line of bikini-clad girls with wonder and not lust in his eyes.

“
Baywatch
,” he muttered. “Fucking Baywatch.” The girls stopped running, they too disappearing into the tulips. “No, not now!” he pleaded as the flowers began to fade away. “Why do I always have to miss the fucking good bits?” The fields and forests disappeared, and the next thing Matthew saw was the digital clock on top of his bedside cabinet.

The words filtered through to him through the fog of sleep. He opened his eyes slowly, letting a soft yawn escape his mouth.

The voice, female and smoky, spoke again, “I’ve been watching you for twenty minutes or so.” It had a soft, caring quality to it, a tone of nostalgia, like a grandmother speaking to her growing child.

“You’ve been watching me?” Matthew asked, his voice dry. “Is something wrong with the TV?” He reached over and took a glass of water from his bedside cabinet, and taking three swigs, he spoke to the woman again, still not looking her way. “I could find that both disturbing and complimentary.” He pushed his way to the edge of the bed. “On the one hand,” he said leisurely, “you could find me invigorating, beautiful to the eye, appeasing enough to stare at for twenty minutes. I mean that’s a long time ... that’s longer than I’ve ever stared at the Mona Lisa, longer than I’ve ever devoted to one single work of genius. Hell, I went to Egypt and spent less time looking at the pyramids.”

Matthew rolled his legs off the edge of the bed and slipped his feet into his Dennis the Menace slippers. “On the other hand,” he said, his words still deliberate and calm, “you could be a stalker. I may have spent less than twenty minutes staring at a work of art, but I’ll bet my left testicle that Dahmer spent
hours
staring at
his
victims.” Matthew rose, his back still to the female, and stretched.

Walking over to the windowsill, he came into contact with the smoky voice. Jennifer Wilkinson was a soul singing sensation; her voice sold millions of albums, the soft caring innocence fused with a harsh, smoky texture made her the love of a generation. Her looks: dark eyes, encapsulated by thick and wavy jet black hair, gave her the adoration of the opposite sex. For the last four years, since the beginning of her career, she’d been declared the sexiest woman in music twice, had appeared on dozens of magazine layouts, and even featured in an ad campaign for lingerie.

Matthew walked up to her and planted a kiss on her cheek. She was sitting on the windowsill, smoking a cigarette out the open window. Her eyes were set on the beautiful landscape outside the window.

“So, which one does that make you, then?” Matthew asked, following her line of sight and admiring the view. “A stalker or a lover?”

Jennifer took her eyes away from the window and locked stares with Matthew. She blew a stream of smoke his way. It halted just before his face before being ushered out of the window by a gentle breeze. “You talk too much,” Jennifer said, preferring not to answer the question.

“Why were you staring at me, then?” Matthew asked placidly as he walked around the room, picking up his clothes and slipping them on.

Jennifer was silent at first, her eyes still lost in the world outside; when she spoke, her words avoided Matthew’s question again. “I don’t know how you do it,” she said, shaking her head.

“This!” Jennifer gestured all around her. “You live in a seven bedroom, seven million pound mansion–”

“Whatever!” Jennifer bellowed, shaking it off. “You have a constant flow of money.” Sticking the cigarette in her mouth, she brought her hands together and began counting out numbers on each finger. “Royalties from your bloody autobiographies, the plural being important there, because you’re only
thirty-one
!”

Matthew smiled as Jennifer pushed one finger up. In her world, it indicated one: one problem, one issue that needed to be addressed; in Matthew’s world, someone was taking a piggy to market.

“Money from all your bloody houses.” A second finger went up and a piggy was forced to stay home. “I mean, who in God’s name needs sixty houses? You’re not even a property developer. And every one,
every
bloody house you buy, you sell on for a profit. A profit that shouldn’t even be! You buy shit for a penny and sell shit wrapped in ribbon for a quid; it’s unbelievable. Only you could find the sixty dumbest people alive, and then sell them all a house,
consecutively
!” she paused to inhale, and when her words left her lips, so did trickles of wispy grey smoke.

“Thirdly.” Another piggy was brought into the action, this time eating roast beef. “All your stocks and shares, everything you’ve ever invested in, all went through the roof! You even bought shares in an ice cream shop, near bankrupt and stuck on a desolate pier on the South coast, and what happens the next week?”

“I wasn’t the one who decided they should build a new pier there,” Matthew said softly.

“A pier? They built a whole fucking city. They turned the slums into the fucking Ritz.” She inhaled another lungful of smoke. “Overnight, may I add,” she continued. “I mean how did you even think to–” she paused, her face a mix of wonder and building frustration. “Why are you smiling?” she asked sternly.

“Nothing,” Matthew said, refusing to admit he had been thinking of children’s rhymes all the way through her speech. “It’s nothing,” he bent down to slide a sock on, hiding his smile in his lap. “I just thought of a joke I heard, that’s all.” He coughed awkwardly and returned his eyes to his frustrated lover.

The Gallant by William Stuart Long
The Quiet Gun - Edge Series 1 by Gilman, George G.
Shafted by Mandasue Heller
The High Mountains of Portugal by Yann Martel
Mabe's Burden by Kelly Abell
The Impaler by Gregory Funaro
The Dark Heart of Italy by Tobias Jones
Hemlock Veils by Davenport, Jennie
Sluts @ Work (Juicier Erotica) by Grand, G.C.
The Father: Made in Sweden Part I by Anton Svensson