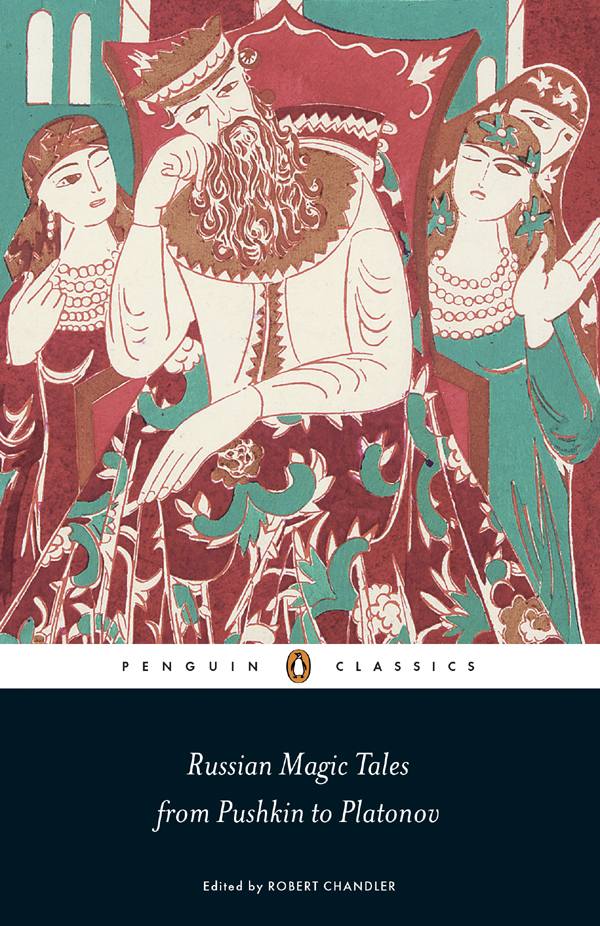 Introduced by
ROBERT CHANDLER
with an Appendix by
SIBELAN FORRESTER

A Tale about a Priest and his Servant Balda

A Tale about a Fisherman and a Fish

The Crane and the Heron

The Tsarevna in an Underground Tsardom

The Tsarevna who would not Laugh

The Stepdaughter and the Stepmother’s Daughter (tr. Sibelan Forrester)

Ivan Tsarevich, the Grey Wolf and the Firebird

The Luck of a Tsarevna

By the Pike’s Command

When the Crayfish Whistled: a Christmas Horror

The Mistress of the Copper Mountain (tr. Anna Gunin)

The Cat with the Golden Tail

Mishka the Bear and Myshka the Mouse

The Herder of Hares

A Cock and Bull Story

The Snake and the Fisherman

How a Man Pinched a Girl’s Breast

Ivan the Giftless and Yelena the Wise

Wool over the Eyes

Appendix
: Baba Yaga: The Wild Witch of the East by Sibelan Forrester

ROBERT CHANDLER
has translated Sappho and Guillaume Apollinaire for Everyman’s Poetry. His translations from Russian include Aleksandr Pushkin’s
Dubrovsky
and
The Captain’s Daughter
, Nikolay Leskov’s
Lady Macbeth of Mtsensk
and Vasily Grossman’s
Life and Fate
and
The Road
. With his wife Elizabeth and other colleagues he has co-translated numerous works by Andrey Platonov;
Soul
won the 2004 American Association of Teachers of Slavic and East European Languages award for best translation from a Slavonic language, as did his translation of
The Railway
by the contemporary Uzbek novelist Hamid Ismailov. His
Russian Short Stories from Pushkin to Buida
is published in Penguin Classics.

ELIZABETH CHANDLER
is a co-translator, with her husband, of Pushkin’s
The Captain’s Daughter
and of several titles by Andrey Platonov and Vasily Grossman.

PROFESSOR SIBELAN FORRESTER
teaches at Swarthmore College, Pennsylvania. Her broad range of interests include Russian folklore, the poetry of Marina Tsvetaeva and Russian Women’s Writing. She has translated many books – both poetry and prose – from Croatian, Russian and Serbian. Wayne State University Press will soon be publishing her translation of Vladimir Propp’s
The Russian Folktale.

ANNA GUNIN
has translated
I am a Chechen!
by German Sadulaev and
The Sky Wept Fire
by
Mikail Eldin. She is now translating a complete edition of Varlam Shalamov’s
Kolyma Tales
for Penguin Classics.

PROFESSOR OLGA MEERSON
teaches at Georgetown University and is the author of books about Dostoevsky, Platonov and Russian poetry. She is a co-translator, with Robert and Elizabeth Chandler, of Andrey Platonov’s
Soul
and
The Foundation Pit.

The hero has one clear, linear task. At the end of it lies his reward, usually a princess. While accomplishing the task, he encounters various helpers, whose gifts or services are all palpably material. Helpers and obstacles appear from nowhere and disappear without a trace; a dark void opens up on either side of the narrow path of the plot. Whatever is on that path, however, is lit up in brilliant primary colours: metallic reds, golds, blues. Throughout his travails the hero expresses no astonishment, curiosity, longing, or fear, and apparently does not experience pain. He never reassesses his goal or his reward.

Off he went towards the blue sea
.

(The blue sea was blacker than black.)

He called out to the golden fish
…

Aleksandr Pushkin, from ‘A Tale about a Fisherman and a Fish’

I used to be Snow White, but I drifted
…

The magic tale – also often called the ‘wonder tale’ or ‘fairy tale’ – is remarkably adaptable. Transformation is its central theme, and the tales themselves seem capable of almost infinite transformation. In one Russian version of the Cinderella story
the heroine is helped by a doll; in another Russian version she is helped by a cow; and in a written version from seventh-century China she is helped by a fish. In different versions of ‘Beauty and the Beast’, the heroine marries a serpent, a white bear, a falcon and – in an English version recorded in the 1890s – ‘a great, foul, small-tooth dog’. And what is essentially the same tale can find a home for itself in a Walt Disney film, in a Russian peasant hut, within the sophisticated framework of
The Arabian Nights
, or in the nurseries of well-brought-up Victorian children.

This adaptability, however, has obscured our understanding of these tales. What have become by far the best-known versions are those derived from Charles Perrault’s
Tales of Mother Goose
, which was first published in 1697. It was Perrault who established the fairy tale as a literary genre and he intended his versions for the children of the French upper and middle classes. And in 1812 the Brothers Grimm chose to follow Perrault, entitling their famous collection
Children’s and Household Tales
. The oral magic tale, however, is often violent, scatological and sexually explicit. It is probable that its origin lies in archaic rituals, that it was seen as endowed with occult power and that there were strict conditions as to when, where, how and by whom it could be told. Such taboos survived longer in Russia than in most European countries; according to the American scholar Jack Haney, many storytellers in the far north of European Russia observed strict taboos as late as the 1930s; tales could be told only by men, to male audiences, after dark, and never during the main Orthodox fasts. The underlying reason for these taboos was the belief that spirits of all kinds enjoyed listening to tales. At night and in winter, when a peasant’s animals were safely shut up, spirits presented less of a danger. When the animals were out in the fields, however, spirits might come and steal them – and in spring and early summer they might steal the animals’ young.
1
Haney’s view is that women storytellers first appeared in Russia only in the early nineteenth century.
2
This is impossible to establish with certainty, but Haney’s broader point remains incontrovertible: the tales were not to be told lightly.

Magic tales are perhaps easier to recognize than to define. Most involve some kind of quest – often into the underground realm of a dangerous witch; this may be like a vestige of some shamanic initiation rite. Often the hero is able to achieve his goal only thanks to the wisdom and practical help provided by birds, fish or other creatures whom he has helped earlier in the tale; this, too, is reminiscent of a shaman calling on his spirit helpers. Sometimes the hero is transformed from bird or animal to human, or vice versa; sometimes he is cut to pieces, then put together again. Just as all initiation rites involve some kind of transformation and/or symbolic dismemberment, so do all magic tales.

One of the first scholars to articulate these understandings was the Soviet folklorist Vladimir Propp, in his
Historical Roots of the Wonder Tale
(first published as long ago as 1946 but still not translated into English in full).
3
Propp’s view was that participants were prepared for an initiation ritual by being given some indication of what they were about to undergo. The rituals eventually ceased to be practised, but the accounts – or metaphorical accounts – of their content went on being told and eventually took on a life of their own, as ‘magic tales’.
4
Propp’s theories may, of course, be too absolute, and there is no reason to suppose that all magic tales have the same origin.
5
Nevertheless, it is not difficult to see that many magic tales do indeed reflect traditional rites of passage. A clear example from the present volume is ‘Mishka the Bear and Myshka the Mouse’. A girl is sent out into the forest by a cruel stepmother. She is required to play blindman’s bluff with a murderous bear; a mouse, however, takes the girl’s place, leaping around the hut from bench to floor and back up onto the bench again. Eventually the bear admits defeat and rewards the girl. This motif is reminiscent of the ‘search for the bride’ that, in some regions of Russia, still remains a part of peasant weddings. It closely parallels an anonymous account of a mid nineteenth-century peasant wedding: ‘The guests began to chant to the bride, “Do not go, our child; do not go, our dear Annushka, along your father’s benches; do not leap, do not leap; don’t play about […]; jump, jump into your [wedding] tunic.” To which the
bride replied, “If I want to, I’ll jump; if I don’t, I won’t.” ’
6
And in some parts of Russia the groom and bride were known as ‘the he-bear’ and ‘the she-bear’.