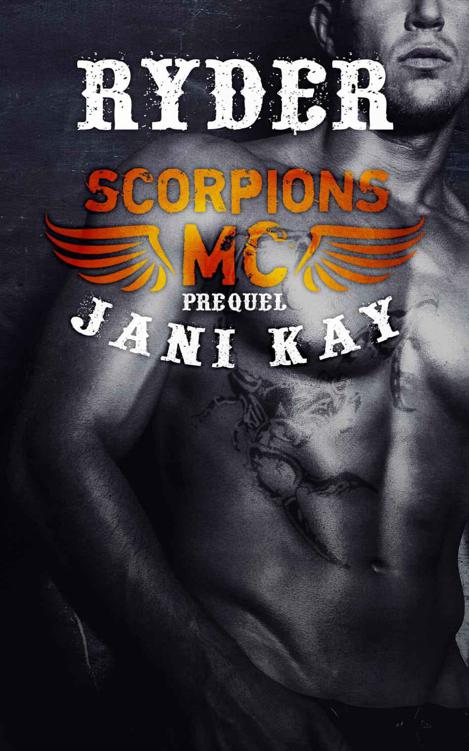 All
Jade
ever wants is an intelligent, well-mannered, and highly educated man like her daddy. One who has stellar career prospects as he climbs the corporate ladder to success. A good provider who will give her a stable life and a gorgeous house in the right neighborhood.  A charmed life.

Everything orderly and well balanced.

What she doesn’t want is a smartass, cocky, rough-around-the-edges biker. One who has tattoos and piercings, and looks like a sex god. One who is demanding and controlling. The ultimate alpha male who storms into her life and shakes her to the core.
Who won’t take no for an answer.

Jade never saw it coming. Ryder is the one man she can’t resist. He shows her what she really needs. Him.

Jade is the quintessential good girl. But what if she discovers that her perfect world isn’t as great as she believes it to be?

Undernea
th the layer of propriety, is there a naughty girl waiting to break free. Is Ryder the man to show her how?

All
Ryder
wants is inner peace. Freedom from the hatred churning in his gut.

Since his mother deserted him, his l
ife has turned to shit.

He’s killed a man, lost his brother and fought for his survival. All before turning twelve.

Saved by Razor and Cobra, sons of the Scorpions, he owes his life and allegiance to them. The Scorpion MC is his only family. One he will serve and protect till his dying breath.

What he doesn’t need in his life is a smart mouthed woman who thinks she’s better than him. One who pushes every one of his
buttons. One who challenges him to want to be more than a drifter. One who makes him question everything he’s ever known.

Ryder never saw it coming. He can’t get Jade out of his head. She shows him what he really wants. Her.

Two worlds colliding. Can they make it work? Or will it tear them
apart?

Ryder wants Jade beneath him. Submitting to him and only him.

Jade has other plans that don’t include badass biker boys.

Can two people, so different in every way, find love? Or will their different worlds collide and tear them apart?

All rights reserved. No part of this book may be distributed for commercial or non-commercial purposes, copied, or reproduced electronically or in print without written permission, except for brief quotations embodied for reviews.

This book is licensed for your personal enjoyment only. This eBook may not be re-sold or given away to other people. If you would like to share this book with another person, please purchase an additional copy for each recipient. If you’re reading this book and did not purchase it, or it was not purchased for your use only, then please return it and purchase your own copy.

Thank you for respecti
ng the hard work of this author.

This book is for my son, Neil, a real
Scorpio(n).

Be the best you can be.

To ALL my loved ones – family and friends,

who
deeply touch my heart and my soul.

More than you will ever know.

Thank you for your support and believing in me.

It means the world to me.

And yes, something of
you
is probably in this book.

Thank you for purchasing and reading my books.

Without
You, the reader, writers wouldn’t have

an
audience for their stories.

Oscar style ‘Thank You’s’ at end of the book.

My ideal man was nothing like the man standing in front of me.

This man was
rugged, rough around the edges and plain rude. Broody even. Long hair in a ponytail with piercings didn’t do it for me. Neither did bulky rings and leather armbands. And chains—ugh.

I was still undecided about tattoos
—I could go either way. Sighing, I pushed the forms back toward him, trying not to roll my eyes.
It’s going to be another one of
those
days.

“I’m not filling out any shitty
forms. And that’s final.” He grunted like a Neanderthal.

I drew in a long breath and counted to three. “Well, then I’m afraid we can’t help you. We need the personal information of our clients before we rent a house to them.
That’s not negotiable.”

He slung his backpack
off his shoulder and onto the counter. “Sweetheart, I don’t think you understand. I’m willing to pay three times the security deposit you’re asking, plus one full year’s rental in advance. In hard cash. You don’t need personal information.”

I
hated
when a stranger called me sweetheart. It was so…condescending. I shook my head. “You’re wrong. The owners need information about you before they will rent the property to you. Those are the rules and there are
reasons
for those rules.”

“I don’t give a flying fuck about your rules. You said the house was available immediately, yeah? It’s fully furnished,
it’s in the right neighborhood and it fills my needs. That’s all I need to know.” He balled his fists on the counter, his dark eyebrows knitted together. A small vein ticked in his jaw. “It’s simple: I need a house to rent. You have a house to lease. I don’t see the fucking problem here.”

My patience was running thin. I had a crap
-load of other paperwork to get through and he was just wasting my time with his stupid arguments. Thank the Lord this was just a vacation job and I only had another month to go. If I had to deal with customers like this every day, I’d slit my freaking wrists. The customer is
not
always right. In fact, more often than not, they assumed rights which weren’t theirs in the first place. Like this idiot.

“Mr.—?” I drawled, my eyebrow raised.
The scar across his cheek, which also slashed into his eyebrow, told a story I
didn’t
want to know. I shuddered.

“Ryder.
Los Angeles has plenty of real estate agents. There may be someone else that will help you. I can’t.” I held up my hands and shrugged, hoping to God he’d get the message and just go away.
Like right now
. I turned toward the pile of papers screaming for my attention. I had urgent work to do, I wasn’t in the mood for unco-operative people eating into my precious time.

He didn’t
move. He stood there glaring at me.  “Well aren’t you just a little ray of fucking sunshine?”

“
Wh…what?” Nobody had ever spoken to me like that before.
Asshole.

“Your customer service
stinks.” He grabbed hold of the backpack and unzipped it. “See if this will change your mind.”

“Well, I may be biased toward someone who can actually read and write,” I snapped, “
and listen
.” Any moment now I was going to lose this cool, professional tone—I could give as good as I got, and then some. Sarcasm was my second language. It came with being smart and quick witted.

He turned the backpack upside down and shook it hard. Wads of green notes tumbled onto the counter. My eyes widened for a fraction of a second. Clever move.
Almost impressive.

Alesha had just returned from her lunchbreak and walked into the reception area. “Holey
moley,” she said as her jaw dropped open. She smiled up at the man and licked her lips. “I think I really like you. Hot biker, stacks of cash. I got back just in time.”

What the hell was that? I turned to her, disgusted that she would
encourage this stranger with her flippant comment. Where was backup when I needed it?

“Put the money back into the bag. Please
. It’s stupid displaying it like that. Anyone can see through the damn window,” I hissed.

This dumbass biker—if Alesha was right—was really starting to piss me off
, big time.

The corner of his mouth twitched.
He winked at Alesha.
Damn cheek
. He was enjoying this debacle. He shrugged. “It’s the only way I could get your attention.”

The door pushed open and Uncle Eric sauntered in, a wide smile plastered on his
shiny face. He’d just been to a business lunch and I could see from the way his eyes glazed over, that he’d had a few too many glasses of wine. Both his eyebrows shot into his receding hairline when he saw the pile of notes.

I pointed to Ryder, gritting my teeth. “This…
gentleman…
wants to rent the house in Beverley Hills. He refuses to fill out the forms. He thinks he can get away with paying cash. I explained that’s not how we do things around this agency.” There. Now Uncle Eric could help me get rid of him. And I could get on with my day.

“Any smart business man knows cash is king,” Ryder said, his gaze traveling from Alesha to Uncle Eric to me. His arms were folded across his chest, his biceps bulging under his tight
black shirt. Yes, he was enjoying the commotion he was causing, completely ignoring my request to remove the money stacked on the counter. He clearly knew the power it had over mere mortals; what seeing that amount of money lying there in a heap did to them.

I watc
hed as he started rolling up his sleeves, slowly and deliberately exposing the tattoos on his forearms. Alesha giggled flirtatiously, taking a step closer to him.
Traitor.

His nails were
well manicured. Not what I expected from a biker. The tail of a cobra snaked it’s way around his left arm and disappeared under the shirtsleeves. Damn, I’d always been attracted to a man’s forearms. To me they conveyed subtle signs of a man’s virility. And Ryder’s were exceptionally fine—in spite of the tattoos. I swallowed hard.

I caught his eye as the corners of his mouth twisted into a smile. I drew in a sharp breath. Ryder knew exactly what he was doing—he was
trying to break down all resistance and he damn well knew it.

Uncle Eric rubbed his hands together. “Bring the gentleman to my office, Jade.”

Z Children (Book 1): Awakening by Constant, Eli, Barr, B.V.
Helmet for My Pillow: From Parris Island to the Pacific by Robert Leckie
The Dom Project by Heloise Belleau, Solace Ames
Without Doubt by Cj Azevedo
The Devil's Chair by Priscilla Masters
Evil at Heart by Chelsea Cain
A Bride for the Bear (Bear Creek Clan 6) by Harmony Raines
Midnight Marked: A Chicagoland Vampires Novel by Neill, Chloe
The Day I Killed James by Catherine Ryan Hyde
Teamwork Means You Can't Pick the Side That's Right by Scott Adams