Read Till Dawn with the Devil Online

Till Dawn with the Devil 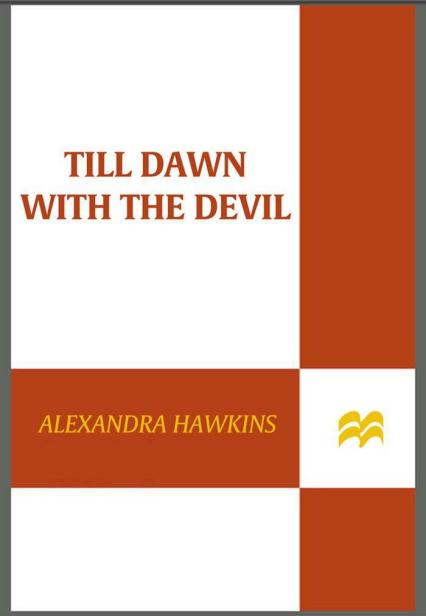 Praise for
All Night with a Rogue

“Wickedly sensual and entertaining! Alexandra Hawkins is an exceptional talent.”

All Night with a Rogue

Till Dawn with the Devil

Excerpt from
After Dark with a Scoundrel
copyright © 2010 by Alexandra Hawkins.

I dedicate this book to my extraordinary literary
agent, Lynn Seligman. Your encouragement and
friendship have meant the world to me.

“I curse the day that I married you, Rainecourt!”

From the bottom of the grand staircase in the great hall, Gabriel Addison Housely, the fifth Earl of Rainecourt, who was simply known as Reign by the
ton,
watched dispassionately as his wife of six months hobbled up the stairs at a reckless pace, her belly already swollen with the son or daughter whom she would deliver in two months because he had suffered the misfortune of impregnating the lady during their first coupling.

He glared at the servants who had appeared in several doorways seconds after Beatrice had vented her displeasure by knocking over the eighteenth-century ormolu-mounted Chinese porcelain vase that once belonged to his grandmother. A maid was already on her knees gingerly
plucking up the sharp pieces of gleaming dark blue porcelain.

Reign dismissed them from his mind and focused on the decanter of brandy his butler had placed on a silver tray along with two glasses.

“The glasses will be unnecessary, Winkler,” Reign said, snatching the crystal decanter from the serving tray. “Lady Rainecourt has broken enough glassware this evening.”

Winkler had been around when Reign’s parents had been alive, and had witnessed the former Lord Rainecourt’s rage and impatience with his countess.

Both had made disastrous choices when picking their brides.

For the nineteen-year-old Reign, marriage had seemed the next logical step, though he had not offered out of obligation. Truth be told, he had fallen in love with the beautiful Miss Roberts at their first meeting, and for a time he had believed Beatrice returned the sloppy sentiment.

To Reign’s everlasting regret, Beatrice had consented to marry him.

It had taken less than a month for him to realize that their blessed union was an unmitigated disaster. He should have listened to his friends. They had tried to talk him out of marrying Beatrice, but he had ignored their warnings. He had also turned a blind eye to his family’s dark, tragic history.

None of this would be happening if I’d kept my bloody hands off Beatrice.

With the neck of the crystal decanter clasped tightly in his hand, Reign pivoted on his heel as a door slammed overhead, signaling that his countess had made it to her bedchamber unscathed. Beatrice had likely lulled herself into believing the locked door would keep him from pursuing the argument that had started before the first course of their supper had been served.

His wife had underestimated his determination.

Reign had grown weary of her mercurial moods and tantrums.

If not for the child within her womb, he would have taken up residence in London weeks after he had taken her as his bride.

How odd,
Reign mused grimly as he pressed his fingers into his brow. He had spent his entire life believing that he and his father were opposites in temperament. This evening, he could not help commiserating with the ruthless bastard.

“Return to your quarters,” Reign ordered the butler, taking his hand away from his face so he could glare at the uninvited spectators to the humiliating demise of his marriage. “There is nothing left to see.”

Winkler cleared his throat. “Milord, if I may—”

Reign closed his eyes to shut out the sympathy he glimpsed in the older man’s expression. “No, you may not. Just go.”

Without a backward glance, he marched up the staircase to confront his wife. Out of respect for her delicate condition, he had refrained from upsetting Beatrice further by pressing her for the answers he craved. Whether it was the wine Reign had imbibed at supper or his countess’s icy discourse during the meal, he no longer cared about Beatrice’s nerves.

In fact, Reign was certain that when he was finished, his wife would need the brandy more than he did.

“Beatrice!” He pounded a fist on her door when he discovered that it was indeed locked. “We have not finished our little chat about your harsh treatment of the servants.”

“Go away,” she said frostily from the other side of the door. “You are too drunk to be reasonable.”

Drunk or sober, Reign sensed his wife would never accept him or their marriage. He removed the glass stopper from the decanter and took a hearty swallow of brandy. The alcohol burned as it coursed down his throat. So did his heart.

He shoved the stopper back into place and placed the decanter on a narrow side table near his wife’s door. Without hesitating he threw his shoulder against the painted six-paneled oak door. Reign clenched his teeth together as the impact jarred his body.
Damn, that bloody well hurt!
From the other side of the door, he heard Beatrice shriek in outrage.

Reign took three steps backward and threw his body against the door again, and again. On the fourth attempt he heard the wood crack, and the door opened. He stumbled into the bedchamber, his heated gaze immediately seeking his wife.

Beatrice was standing near the bed he had never shared with her, trembling with fury and defiance.

“Leave this room at once! You are not welcome here, Rainecourt.”

Reign shut the door. “Nor have I ever been. I have grown tired waiting for an invitation.”

Absently rubbing his bruised shoulder, Reign moved to the center of the bedchamber, his gaze drifting from the charming Chinese wallpaper that had been hung before his birth to the unruffled bedding and finally to the barren surface of Beatrice’s dressing table. He would have been the first to admit that he knew next to nothing about his wife’s private rituals, but something seemed odd about the room. It lacked the personal touches one would expect to see in a lady’s chamber.

Reign’s dark blue eyes glittered dangerously as he turned toward Beatrice. “When did you have your belongings packed: before or after supper?”

Beatrice clasped the carved bedpost for support. “Rainecourt, please do not make this any more difficult than it has to be,” she pleaded, sounding tired.

Furious to have his accusation confirmed, Reign strode up to his wife and seized her by the shoulders. “Difficult? My God, woman, your actions have given new meaning to the word since I placed my ring on your finger!”

Her eyes bright and eloquent in their resolve, Beatrice shook her head. “Can you not see? All of this is a mistake—”

It mattered little to Reign that he had come to a similar conclusion months ago. Unlike his adulterous father, he intended to honor his vows. His countess, however, had other plans, and the notion that she was leaving him set the seething cauldron of pain and brandy in his gut ablaze.

“What were you planning? To sneak out of the house while I slept?” He tugged her closer, no longer caring if his touch distressed her. “Need I remind you, Lady Rainecourt, that you carry
my
child in your womb? Possibly my heir.”

Her mouth thinned as her eyes took on a mutinous cast. “I have rights.”

Truth Within Dreams by Elizabeth Boyce
vicarious.ly by Cecconi, Emilio
The Blue Hour by Donahue, Beatrice
The Hidden History of the JFK Assassination by Waldron, Lamar
Spiral of Bliss 01 Arouse by Nina Lane
In Name Only by Roxanne Jarrett
The Attenbury Emeralds by Walsh, Jill Paton
The Lunatic by Charles Simic
Choked Up by Janey Mack
Multiple Exposure A Sophie Medina Mystery by Ellen Crosby